Algorithms are proposed for the computation of set-valued quantiles and the values of the lower cone distribution function for bivariate data sets. These new objects make data analysis possible involving an order relation for the data points in form of a vector order in two dimensions. The bivariate case deserves special attention since two-dimensional vector orders are much simpler to handle than such orders in higher dimensions. Several examples illustrate how the algorithms work and what kind of conclusions can be drawn with the proposed approach. 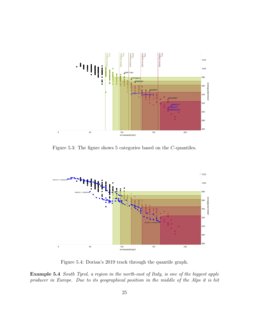 Algorithms are presented for computing the quantile sets for bivariate random variables as well as the values of the corresponding lower cone distribution function in the presence of an order relation for their values. Such quantiles in the general multivariate case have been defined in

as a common generalization of univariate quantiles and Tukey’s (halfspace) depth regions. Likewise, the lower cone distribution function is a common generalization of the univariate cumulative distribution function and Tukey’s (halfspace) depth function. It can also be used as a ranking function for multi-criteria decision making problems

Moreover, it was shown in [2] that set-valued quantiles and the lower cone distribution functions form Galois connections between complete lattices of sets and the interval [0,1] of real number. This generalizes a property which is straightforward and well-known in the univariate case, but has never been discussed with respect to depth functions and depth regions. It is also shown in [2] that set-valued quantiles characterize the distribution of a random set extension of the original random variable as well as its capacity functional.

The bivariate case deserves special attention since convex cones in IR2 have a very simple representation (every closed convex cone is polyhedral, i.e., the intersection of a finite number of halfspaces—this number being 1 or 2 in almost all cases) and, using this, the computations can be done much faster than in the general IRd-valued case: there are polyhedral cones with arbitrary many facets already in IR3.

Algorithms for the bivariate location depth and corresponding depth regions were given in [17, 18]. Algorithms for depth functions and regions in general dimensions can be found, for example, in [5, 10, 11, 12, 15]. These references are mainly concerned with Tukey depth functions/regions, i.e., they do not take an order relation for the value of the random variable into account. The reader may compare [4] which is one of the very few references dealing with statistics for multivariate ordered data.

On the other hand, an order relation is often present and intuitive since decision makers have preferences or the impact of some events is clearly preferred over the ones of others. A few examples illustrating this feature are discussed below: hurricane scales, hail insurance and human resource management. It is beyond the scope of this paper to give an exhaustive statistical analysis of these example; they are used as showcases for the type of conclusions which can be drawn with the approach initiated in [6], in particular what sets it apart from a mere depth function approach.

The paper is organized as follows. In the next section, vector orders in IR2 are reviewed. Section 3 includes the definition of the main concepts and preparatory results. The algorithms are presented in Section 4 while in Section 5 several examples are discussed including a new view on hurricane scales and the problem of finding best candidates for tasks/jobs.

The basic assumption is that there is a preference relation for the two-dimensional data points in form of a vector preorder, i.e., a reflexive and transitive relation which is compatible with the algebraic operations in IR2. Such vector preorders are in one-two-one correspondence with convex cones C⊆IR2 including 0∈IR2 via

In the following, it is assumed that the cone C generating the preorder via (2.1) is closed. Such vector preorders in IR2 have some special features compared to the case d>2. Only the following cases are possible:

3. The cone is generated by two linearly independent vectors:

There are interesting non-closed cones such as the lexicographic ordering cone even in IR2; such cases require a different type of analysis (since the bipolar theorem does not apply) and therefore, they will not be considered here.

The case C={0} leads to the Tukey halfspace depth function and regions; it is dealt with, e.g., already in [18]. While the case C=IR2 is trivial, the case C=L will not be discussed in this paper. Finally, if C is a closed halfspace, there is w∈IR2∖{0} such that C=H+(w)={z∈IR2∣wTz≥0}; in this case, the order ≤H+(w) is a total preorder (a reflexive, transitive relation such that either y≤H+(w)z or z≤H+(w)y or both) and the situation can be reduced to the univariate case.

In this paper, the main subject is the case of a closed convex pointed cone with non-empty interior, i.e., #3 above and case #4 will appear as an intermediate step.

It is assumed in the following that b1,b2 as well as v1,v2 are known, and the two sets {b1,b2} and {v1,v2} are called a V-representation and an H-representation of C, respectively. The set

is called the (positive) dual cone of C (always a closed convex cone). Under the given assumptions,

In this section, we give the definitions of lower cone distribution functions and associated quantiles for bivariate random variables in case of a finite data sets. Let ~X={x1,x2,…,xN}⊆IR2 be a finite collection of data points which could be a sample of a random variable. The following definition provides the bivariate empirical counterpart to the concepts from [6]. Compare also [9] for the IRd-valued case with applications to a multi-criteria decision making problem.

Proof. This follows directly from the monotonicity property of F~X,w and F~X,C, respectively, in [6, Proposition 1 (b)]. □

The following example shows that the cone location depth (as well as F~X,C) can be understood as a ranking function for the data points which reflects the order ≤C. This seems to be very much in the spirit of Tukey’s original work. This example also shows that points which are non-comparable with respect to the order ≤C can have the same or very different cone location depths.

Empirical quantiles are set-valued functions, i.e., they map into the power set P(IR2), the set of all subsets of IR2 including the empty set.

where ⌈Np⌉ is the value of the ceiling function at Np defined by ⌈r⌉=min{k∈IN∣r≤k} (the least natural number which is greater than or equal to r∈IR). Clearly,

Let ~Y⊆IR be a finite univariate data set. We denote its empirical lower quantile by q−~Y(p)=min{¯y∈~Y∣#{y∈~Y∣y≤¯y}≥⌈Np⌉}. With this notation, one has

as in the general (multi-dimensional) case (see [6, Proposition 6]).

Next, we formally state that at least one data point must be on the boundary of each w-quantile.

Moreover, the following three conditions are equivalent for ~x∈~X:

For the following result, some notation is needed which is also used in the remainder of the paper. For w∈B+ we define the following sets

Standing assumption. In the remainder of the paper, it is assumed that C+ is generated by the two linearly independent vectors v1,v2∈C+, i.e., {v1,v2} is a V-representation of C+. In this case, the set

is a base of C+. Equivalently, C is generated by two linearly independent vectors b1,b2∈C, i.e., {b1,b2} is a V-representation of C.

This means that Q−~X,w(p) does not contribute to the intersection in

The definitions of w1 and w2 yield

In the first case, wi is also redundant by Proposition 3.6. This is exploited in the algorithm below. In the second, wi cannot be ruled out by the proposition, but it could still be redundant for the intersection in (3.10).

Under the standing assumption, the situation can be reduced to the case when the cone is C=IR2+. Let C be generated by the two linearly independent vectors b1,b2∈IR2, i.e., C={s1b1+s2b2∣s1≥0,s2≥0}

. Then, there is an invertible matrix

A∈IR2×2 such that AC=IR2+ and one can use the affine invariance of the cone distribution function FX,C (see [6, Proposition 2.7]) to get

do the job. Moreover,

so (A−1)⊤C+=IR2+. The procedure now is: first, transform the data and the cone C by A; secondly find FAX,IR2+ and AQ−X,C; finally transform back. Clearly, this idea is restricted to the bivariate case.

The algorithm below is designed such that it starts with w1=v1 and then runs through B+ until it hits v2. At an intermediate step, a wn∈B+ is generated. There are three cases: