Community Detection with Side Information: Exact Recovery under the Stochastic Block Model 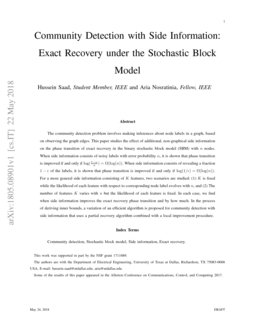 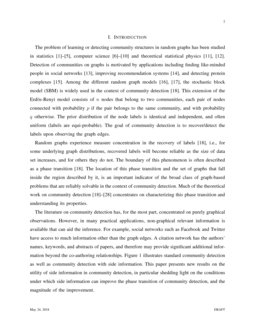 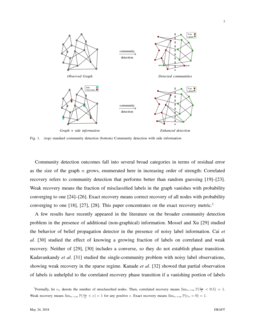 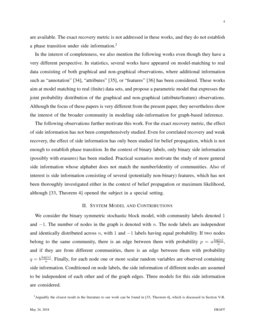 The problem of learning or detecting community structures in random graphs has been studied in statistics [1, 2, 3, 4, 5], computer science [6, 7, 8, 9, 10] and theoretical statistical physics [11, 12]. Detection of communities on graphs is motivated by applications including finding like-minded people in social networks [13], improving recommendation systems [14], and detecting protein complexes [15]. Among the different random graph models [16, 17], the stochastic block model (SBM) is widely used in the context of community detection[18]. This extension of the Erdös-Renyi model consists of n nodes that belong to two communities, each pair of nodes connected with probability p if the pair belongs to the same community, and with probability q otherwise. The prior distribution of the node labels is identical and independent, and often uniform (labels are equi-probable). The goal of community detection is to recover/detect the labels upon observing the graph edges.

Random graphs experience measure concentration in the recovery of labels [18], i.e., for some underlying graph distributions, recovered labels will become reliable as the size of data set increases, and for others they do not. The boundary of this phenomenon is often described as a phase transition [18]. The location of this phase transition and the set of graphs that fall inside the region described by it, is an important indicator of the broad class of graph-based problems that are reliably solvable in the context of community detection. Much of the theoretical work on community detection [19, 20, 21, 22, 23, 24, 25, 26, 27, 28, 18] concentrates on characterizing this phase transition and understanding its properties.

A few results have recently appeared in the literature on the broader community detection problem in the presence of additional (non-graphical) information. Mossel and Xu [29] studied the behavior of belief propagation detector in the presence of noisy label information. Cai et al. [30] studied the effect of knowing a growing fraction of labels on correlated and weak recovery. Neither of [29, 30] includes a converse, so they do not establish phase transition. Kadavankandy et al. [31] studied the single-community problem with noisy label observations, showing weak recovery in the sparse regime. Kanade et al. [32] showed that partial observation of labels is unhelpful to the correlated recovery phase transition if a vanishing portion of labels are available. The exact recovery metric is not addressed in these works, and they do not establish a phase transition under side information.222Arguably the closest result in the literature to our work can be found in [33, Theorem 4], which is discussed in Section V-B.

In the interest of completeness, we also mention the following works even though they have a very different perspective. In statistics, several works have appeared on model-matching to real data consisting of both graphical and non-graphical observations, where additional information such as “annotation” [34], “attributes” [35], or “features” [36]

has been considered. These works aim at model matching to real (finite) data sets, and propose a parametric model that expresses the joint probability distribution of the graphical and non-graphical (attribute/feature) observations. Although the focus of these papers is very different from the present paper, they nevertheless show the interest of the broader community in modeling side-information for graph-based inference.

The following observations further motivate this work. For the exact recovery metric, the effect of side information has not been comprehensively studied. Even for correlated recovery and weak recovery, the effect of side information has only been studied for belief propagation, which is not enough to establish phase transition. In the context of binary labels, only binary side information (possibly with erasures) has been studied. Practical scenarios motivate the study of more general side information whose alphabet does not match the number/identity of communities. Also of interest is side information consisting of several (potentially non-binary) features, which has not been thoroughly investigated either in the context of belief propagation or maximum likelihood, although [33, Theorem 4] opened the subject in a special setting.

. Finally, for each node one or more scalar random variables are observed containing side information. Conditioned on node labels, the side information of different nodes are assumed to be independent of each other and of the graph edges. Three models for this side information are considered.

The observed graph is denoted by G

, the vector of nodes’ true assignment by

In earlier community detection problems [27, 18], LLRs do not depend on n even though individual likelihoods (obviously) do. This was very fortunate for calculating asymptotics. In the presence of side information, this convenience disappears and LLRs will now depend on n, creating complications in bounding error event probabilities en route to finding the threshold in the asymptote of large n. Overcoming this technical difficulty is part of the contributions of this paper.

To illustrate the results of this paper, Figures 2, 3 show the error exponent for the side information consisting of partially revealed labels or noisy label observation, as a function of β. It is observed that the value of β needed for recovery depends on a,b. For the partially revealed labels, when (√a−√b)2<2, the critical β is 1−12(√a−√b)2. For noisy label observations, when (√a−√b)2<2, the value of critical β can be determined as follows: if η(a,b,T(a−b)2)>2, then the critical β is the solution to η=2. On the other hand, if η(a,b,T(a−b)2)<2, then the critical β is one.

In this section, side information consists of a noisy version of the label that with probability α∈(0,0.5) fails to match the true label.

Then, the log-likelihood function can be written as:

where (a) holds because G,y are independent given x. In (b), all terms that are independent of x have been collected into a constant R, and log(p(1−q)q(1−p)) has been approximated by (1+o(1))T, which is made possible because (1−p),(1−q) both approach 1 as n→∞. The difference between Eq. (III) and the likelihood function without side information is the term c(J+(A)+J−(B)) and a constant nlogα that is hidden inside R.

The following lemma characterizes a lower bound on the probability of failure of the maximum likelihood detector. Let E[⋅,⋅] denote the number of edges between two sets of nodes.333For economy of notation, in the arguments of E[⋅,⋅] we represent singleton sets by their single member.

Let A and B denote the true communities. Define the following events:

Define two new communities ^A=A∖{i}∪{j} and ^B=B∖{j}∪{i}. If log(P(G,y|^A,^B))≥log(P(G,y|A,B)) it means maximum likelihood chooses incorrectly and therefore fails. We show that this happens under FA∩FB.

Let Aij∼Bern(q) be a random variable representing the existence of the edge between nodes i and j. Then, using (III):

where (a) holds by the assumption that FA∩FB happened and (b) holds because (1−Aij)≥0 and T≥0. The inequality (b) implies the failure of maximum likelihood.

Define c≜log(1−αα). The maximum likelihood failure probability is bounded away from zero if:

Let H be a subset of A with |H|=nlog3(n) and define the following events for each node i∈H:

and the following events defined on H:

By the symmetry of the graph and the side information, P(FB)≥1−2δ as well. Also, by Lemma 1 FA∩FB⇒F. Then:

via a multiplicative form of Chernoff bound, stating that a sequence of n i.i.d random variables Xi, P(∑ni=1Xi≥tμ)≤(te)−tμ, where μ=nE[X]. Thus, by union bound:

The following lemma completes the proof of Theorem 1.

See Appendix A. Combining Lemmas 2, 3, 4, 5 concludes the proof of the theorem.

Sufficient conditions are derived via a two-step algorithm whose first step uses a component from [21], a method based on spectral properties of the graph that achieves weak recovery.

We start with an independently generated random graph H1 built on the same n nodes where each candidate edge has probability Dlog(n). The complement of H1 is denoted H2. Then G is partitioned as follows: G1=G∩H1 and G2=G∩H2. G1 will be used for the weak recovery step, G2 for local modification. The partitioning of G allows the two steps to remain independent.

With probability approaching one as n grows, the algorithm above successfully recovers the communities if:

We first upper bound the misclassification probability of a node assuming H2 is a complete graph, then adjust the bound to account for the departure of H2 from a complete graph.

Fig. 4 shows the mis-classification conditions: an error happens either when the weak recovery was correct and is overturned by the local modification, or when the weak recovery is incorrect and is not corrected by local modification. Let W∼Bern(p) and Z∼Bern(q) represent edges inside a community and across communities, respectively. Let yi∈{1,−1} with probabilities (1−α),α, respectively. For simplicity, we will write δ instead of δ(D). Then, the mis-classification probability is:

To adjust for the fact that H2 is not complete, the following Lemma is used, noting that H2=Hc1.

With high probability, the degree of any node in H1 is at most 2Dnlog(n).

Let {Yi}i=1,⋯,n be a sequence of i.i.d. Bernoulli random variables with parameter Dlog(n). Define Y=∑n−1i=1Yi. Then, E[Y]=Dnlog(n) and hence, by Chernoff bound:

Thus, by using a union bound:

The following lemma shows an upper bound on Pe.

For the last case, β>1 remains sufficient because of the following lemma.

Since ψ(a,b,β) is convex in β, it can be shown that at the optimal β∗, log(γ∗+β∗γ∗−β∗)=T. Using this fact and substituting in (11):

By the definition of γ: γ+β=abT2γ−β. Using the fact that γ∗+β∗γ∗−β∗=ab leads to ab=abT2(γ∗−β∗)2, which implies that γ∗=bT+β∗. Hence, by substituting in (12):

Combining the last lemma with (10) concludes the proof.

The following lemma shows that if the graph includes at least one pair of nodes that have more connections to the opposite-labels than similar-labels and if their side information is an erasure, the maximum likelihood detector will fail.

From the sets A,B, we swap the nodes i,j, producing ^A=A∖{i}∪{j} and ^B=B∖{j}∪{i}. We intend to show that subject to observing the graph G and the side information y, the likelihood of ^A,^B is larger than the likelihood of A,B, therefore under the condition FA∩FB, maximum likelihood will fail.

Let Aij∼Bern(q) be a random variable representing the existence of the edge between nodes i and j. Then, from (IV):

where (a) holds by the assumption that FA∩FB happened and (b) holds because (1−Aij)≥0 and T≥0. The inequality (b) implies the failure of maximum likelihood.

The maximum likelihood failure probability is bounded away from zero if:

Let H be a subset of A with |H|=nlog3(n). Consider the following modification to Definition 1:

It is not difficult to show that Lemmas 2, 3, 4 remain valid under this modification. To complete the proof, it is sufficient to find conditions under which P(FHi)>log3(n)nlog(1δ) asymptotically (in n) for all δ∈(0,1).

See Appendix C. Combining Lemma 10 with the modified form of Lemmas 2, 3, and 4, concludes the proof of the theorem.

This section shows sufficient conditions for exact recovery by introducing an algorithm whose exact recovery conditions are identical to Section IV-A. The first stage of the algorithm is the same as Section III-B. The second stage involving local modification is new and is described below.

The community assignments are locally modified for each node i as follows: (a) if A′/B′ membership contradicts side information yi, flip node membership or (b) if yi=0, re-assign membership of i to the community A′/B′ to which it is connected with more edges. After going through all nodes, if the the number of flips in two communities A′,B′ are not the same, void all local modifications.

The algorithm described above successfully recovers the communities with high probability if:

Let Pe=P(node i to be misclassified). Following the same analysis as in the proof of Theorem 2:

Using Lemma 7 and strengthening c=o(log(n)) to c=0, equation (16) can be upper bounded as follows:

Thus, according to asymptotic behavior of ϵ:

We now generalize the side information random variable such that each node observes K features (side information) each has arbitrary fixed and finite cardinality Mk,k∈{1,⋯,K}. The alphabet for each feature k is denoted with {uk1,uk2,⋯,ukMk}. Denote, for each node i and feature k, P(yi,k=ukmk|xi=1)=αk+,mk and P(yi,k=ukmk|xi=−1)=αk−,mk,mk∈{1,⋯,Mk}, where αk+,mk≥0, αk−,mk≥0 and ∑Mkmk=1αk+,mk=∑Mkmk=1αk−,mk=1 for all k∈{1,⋯,K}. All features are assumed to be independent conditioned on the labels. We first consider the case where K is fixed while αk+,mk and αk−,mk are varying with n for mk<span class="mjx-mo MJXc-sp