In this draft, which reports on work in progress, we 1) adapt the information bottleneck functional by replacing the compression term by class-conditional compression, 2) relax this functional using a variational bound related to class-conditional disentanglement, 3) consider this functional as a training objective for stochastic neural networks, and 4) show that the latent representations are learned such that they can be used in a naive Bayes classifier. We continue by suggesting a series of experiments along the lines of Nonlinear In-formation Bottleneck [Kolchinsky et al., 2018], Deep Variational Information Bottleneck [Alemi et al., 2017], and Information Dropout [Achille and Soatto, 2018]. We furthermore suggest a neural network where the decoder architecture is a parameterized naive Bayes decoder. 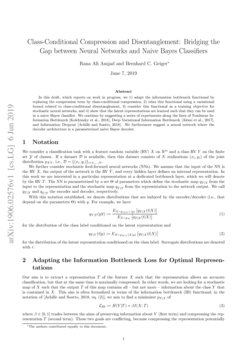 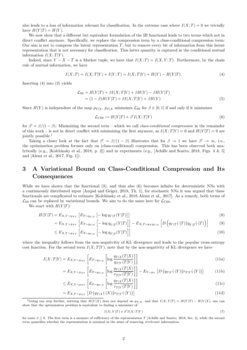 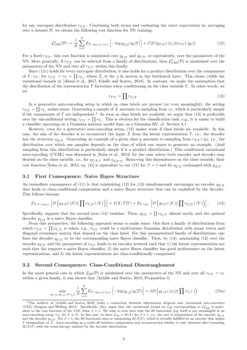 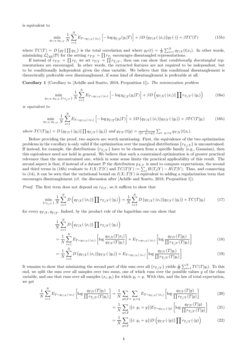 As a consequence of the strong and usually violated conditional independ...
Kim-Hung Li, et al. ∙

We consider a classification task with a feature random variable (RV)

X on Rm and a class RV Y on the finite set Y of classes. If a dataset D is available, then this dataset consists of N realizations (xi,yi)

of the joint distribution

We further consider stochastic feed-forward neural networks (NNs). We assume that the input of the NN is the RV

With this notation established, we denote distributions that are induced by the encoder/decoder (i.e., that depend on the parameters Θ) with q. For example, we have

for the distribution of the latent representation conditioned on the class label. Surrogate distributions are denoted with r.

Our aim is to extract a representation T of the feature X such that the representation allows an accurate classification, but that at the same time is maximally compressed. In other words, we are looking for a stochastic map of X such that the output T of this map contains all – but not more – information about the class Y that is contained in X. This aim is often formalized in terms of the information bottleneck (IB) functional; in the notation of [Achille and Soatto, 2018, eq. (2)], we aim to find a minimizer pT|X of

where β∈[0,1] trades between the aims of preserving information about Y (first term) and compressing the representation T (second term). These two goals are conflicting, because compressing the representation potentially also leads to a loss of information relevant for classification. In the extreme case where I(X;T)=0 we trivially have H(Y|T)=H(Y).

We now show that a different but equivalent formulation of the IB functional leads to two terms which not in direct conflict anymore. Specifically, we replace the compression term by a class-conditional compression term: Our aim is not to compress the latent representation T, but to remove every bit of information from this latent representation that is not necessary for classification. This latter quantity is captured in the conditional mutual information I(X;T|Y).

. Furthermore, by the chain rule of mutual information, we have

Since H(Y) is independent of the map pT|X, pT|X minimizes LIB for β∈[0,1] if and only if it minimizes

for β′=β/(1−β). Minimizing the second term – which we call class-conditional compression in the remainder of this work – is not in direct conflict with minimizing the first anymore, as I(X;T|Y)=0 and H(Y|T)=0 are jointly possible.222Going one step further, noticing that H(Y|X) does not depend on pT|X, and that I(X;Y|T)=H(Y|T)−H(Y|X), one can show that the optimization problem is equivalent to finding a minimizer of

I(X;Y|T)+β′I(X;T|Y) (7)
for some β≥0. The first term is a measure of sufficiency of the representation T [Achille and Soatto, 2018, Sec. 4], while the second term quantifies whether the representation is minimal in the sense of removing irrelevant information.

3 A Variational Bound on Class-Conditional Compression and Its Consequences

While we have shown that the functional (3), and thus also (6) becomes infinite for deterministic NNs with a continuously distributed input [Amjad and Geiger, 2018, Th. 1]

, for stochastic NNs it was argued that these functionals are complicated to estimate

for any surrogate distribution rT|Y. Combining both terms and evaluating the outer expectation by averaging over a dataset D, we obtain the following cost function for NN training:

Since (11c) holds for every surrogate distribution, it also holds for a product distribution over the components of T, i.e., for rT|Y=rT=∏rTj, where Tj is the j

-th neuron in the bottleneck layer. This choice yields the variational bounds in

[Alemi et al., 2017, Achille and Soatto, 2018]. In contrast, we make the assumption that the distribution of the representation T factorizes when conditioning on the class variable Y. In other words, we set

In a generative auto-encoding setup in which no class labels are present (or even meaningful), the setting rT|Y=∏rTj makes sense: Generating a sample of X amounts to sampling from rT, which is particularly simple if the components of T are independent.333The authors of [Achille and Soatto, 2018] build a connection between information dropout and variational auto-encoders (VAE) [Kingma and Welling, 2014]. Specifically, they argue that the variational bound on LIB corresponding to L∗CIB is equivalent to the cost function of the VAE when β=1. We wish to note here that the IB functional LIB itself is not meaningful in an auto-encoding setup, i.e., for Y≡X: In this case, we have LIB=H(X) for β=1, i.e., the cost is independent of the encoder qT|X and the decoder qX|T. For β<1, the IB functional aims at minimizing H(X|T), which is trivially fulfilled by an encoder that makes T independent of X. Auto-encoding as a trade-off between compression and reconstruction fidelity is only obtained after bounding H(X|T) with the cross-entropy induced by the decoder distribution. As soon as class labels are available, we argue that (13) is preferable over the unconditional setting rT|Y=∏rTj

. This is obvious for the classification task; e.g., it is easier to build a classifier operating on a Gaussian mixture model than on a Gaussian RV, cf. Section

However, even for a generative auto-encoding setup, (13) makes sense if class labels are available. In this case, the aim of the decoder is to reconstruct the input X from the latent representation T, i.e., the decoder has the structure q^X|T. Generating an example of a given class y amounts to sampling from rT|Y(⋅|y), i.e., the distribution over which one samples depends on the class of which one wants to generate an example. (And sampling from this distribution is particularly simple if is a product distribution.) This conditional variational auto-encoding (CVAE) was discussed in [Sohn et al., 2015] for the case where both encoder and decoder may depend on the class variable, i.e., for qT|X,Y and q^X|T,Y. Removing this dependences on the class variable, their cost function [Sohn et al., 2015, eq. (4)] is equivalent to our (12) for β′=1 and for q^Y|T exchanged with q^X|T.

An immediate consequence of (11) is that minimizing (12) for (13) simultaneously encourages an encoder qT|X that leads to class-conditional compression and a naive Bayes structure that can be exploited by the decoder. This follows because

Specifically, suppose that the second term (14) vanishes. Then, qT|Y=∏rTj|Y almost surely, and the optimal decoder q^Y|T is a naive Bayes classifier.

From this perspective, the following approach seems to make sense: One fixes a family of distributions from which rT|Y=∏rTj|Y is taken; e.g., rT|Y

could be a multivariate Gaussian distribution with mean vector and diagonal covariance matrix that depend on the class label. For this parameterized family of distributions, one fixes the decoder

In the more general case in which LIB(D) is minimized over the parameters of the NN and over all rT|Y=rT within a given family, it was shown that [Achille and Soatto, 2018, Proposition 1]

where TC(T)=D(qT∥∏qTj) is the total correlation and where qT(t)=1N∑Ni=1qT|X(t|xi). In other words, minimizing L∗CIB(D) for the setting rT|Y=∏rTj encourages disentangled representations.

Before providing the proof, two aspects are worth mentioning. First, the equivalence of the two optimization problems in the corollary is only valid if the optimization over the marginal distributions {rTj|X} is unconstrained. If instead, for example, the distributions {rTj|Y} have to be chosen from a specific family (e.g., Gaussian), then this equivalence need not hold in general. We believe that such a constrained optimization is of greater practical relevance than the unconstrained one, which in some sense limits the practical applicability of this result. The second aspect is that, if instead of a dataset D the distribution pX,Y is used to compute expectations, the second and third terms in (16b) evaluate to I(X;T|Y) and TC(T|Y):=∑jH(Tj|Y)−H(T|Y). Thus, and connecting to (14), it can be seen that the variational bound on I(X;T|Y) is equivalent to adding a regularization term that encourages disentanglement (cf. the discussion after [Achille and Soatto, 2018, Proposition 1]).

The first term does not depend on rT|Y, so it suffices to show that

for every qT|X,q^Y|T. Indeed, by the product rule of the logarithm one can show that

It remains to show that minimizing the second part of this sum over all {rTj|Y} yields 1N∑Ni=1TC(T|yi). To this end, we split the sum over all samples over two sums, one of which runs over the possible values y of the class variable, and one that runs over all samples (xi,yi) for which yi=y. With this, and the law of total expectation, we get

To investigate whether the presented framework based on class-conditional compression is useful, we plan to perform a set of experiments. Whether these experiments are feasible in principle is, at present, unclear.

In [Kolchinsky et al., 2018], the authors use a stochastic encoder qT|X which learns the mean vector of a multivariate Gaussian with identity covariance matrixm, i.e., qT|X(⋅|x)∼N(fθ(x),σ2I). Therefore, the authors assume that the latent representation T is a Gaussian mixture, with each point in the dataset being an individual component. Based on this assumption, they propose bounding the compression term via [Kolchinsky et al., 2018, eq. (10)]

where η(θ) is a noise parameter that is learned.

Moving from compression to class-conditional compression is achieved by replacing I(X;T) by I(X;T|Y). We believe that this should also be possible in the framework of nonlinear information bottleneck by computing (26) separately for each class. In other words, we bound

This experiment is based on Section 3.1. Specifically, we plan to choose rT|Y from the family of Gaussian distributions with a mean vector μy that depends on the class y

and an identity matrix (possibly scaled with a constant

σy that depends on the class y) as covariance matrix. This leads to the goal of obtaining a latent representation T that is well-approximated by a Gaussian mixture model, where each mixture component is spherical.

The authors of [Alemi et al., 2017] suggest minimizing L∗CIB for a spherical Gaussian rT, i.e., they assume that rT∼N(0,I). Replacing this target distribution by a conditionally independent distribution of the latent dimensions given the class, i.e., by rT|Y(⋅|y)∼N(μy,I) is simple. Unclear is, how the mean vectors {μy} shall be chosen or – which is preferable in the light of Corollary 1 – if these mean vectors can be learned from data jointly (or alternatingly) with the remaining network parameters.

that is implemented by a NN where each neuron output is affected by multiplicative data-dependent noise (which is chosen to follow a log-normal distribution with data-dependent variance for the sake of analytical simplicity). The authors furthermore proposed that

is log-uniform with a point mass at zero or log-normal for ReLU or softplus activation functions, respectively (cf.