Using multimodal neuroimaging data to characterize brain network is currently an advanced technique for Alzheimer's disease(AD) Analysis. Over recent years the neuroimaging community has made tremendous progress in the study of resting-state functional magnetic resonance imaging (rs-fMRI) derived from blood-oxygen-level-dependent (BOLD) signals and Diffusion Tensor Imaging (DTI) derived from white matter fiber tractography. However, Due to the heterogeneity and complexity between BOLD signals and fiber tractography, Most existing multimodal data fusion algorithms can not sufficiently take advantage of the complementary information between rs-fMRI and DTI. To overcome this problem, a novel Hypergraph Generative Adversarial Networks(HGGAN) is proposed in this paper, which utilizes Interactive Hyperedge Neurons module (IHEN) and Optimal Hypergraph Homomorphism algorithm(OHGH) to generate multimodal connectivity of Brain Network from rs-fMRI combination with DTI. To evaluate the performance of this model, We use publicly available data from the ADNI database to demonstrate that the proposed model not only can identify discriminative brain regions of AD but also can effectively improve classification performance. 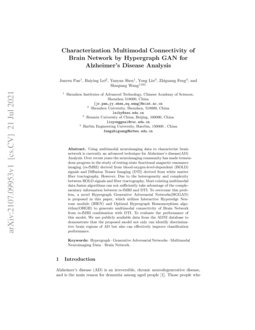 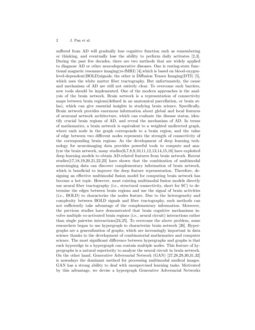 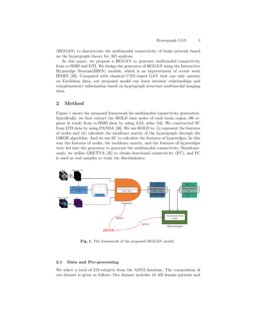 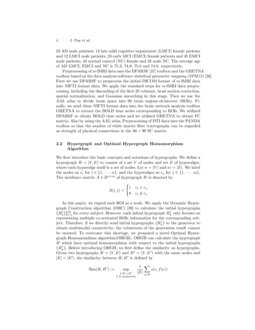 In recent years there has been growing interest in measuring time-varyin...
Hamed Honari, et al. ∙

One of the main reasons for Alzheimer's disease (AD) is the disorder of ...
Junren Pan, et al. ∙

Alzheimer’s disease (AD) is an irreversible, chronic neurodegenerative disease, and is the main reason for dementia among aged people [1]. Those people who suffered from AD will gradually lose cognitive function such as remembering or thinking, and eventually lose the ability to perform daily activates [2, 3]. During the past few decades, there are two methods that are widely applied to diagnose AD or other neurodegenerative diseases. One is resting-state functional magnetic resonance imaging(rs-fMRI) [4],which is based on blood-oxygen-level-dependent(BOLD)signals; the other is Diffusion Tensor Imaging(DTI) [5]

, which uses the white matter fiber tractography. But unfortunately, the cause and mechanism of AD are still not entirely clear. To overcome such barriers, new tools should be implemented. One of the modern approaches is the analysis of the brain network. Brain network is a representation of connectivity maps between brain regions(defined in an anatomical parcellation, or brain atlas), which can give essential insights in studying brain science. Specifically, Brain network provides enormous information about global and local features of neuronal network architecture, which can evaluate the disease status, identify crucial brain regions of AD, and reveal the mechanism of AD. In terms of mathematics, a brain network is equivalent to a weighted undirected graph, where each node in the graph corresponds to a brain region, and the value of edge between two different nodes represents the strength of connectivity of the corresponding brain regions. As the development of deep learning technology for neuroimaging data provides powerful tools to compute and analyze the brain network, many studies

have shown that the combination of multimodal neuroimging data can discover complementary information of brain network, which is beneficial to improve the deep feature representation. Therefore, designing an effective multimodal fusion model for computing brain network has become a hot topic. However, most existing multimodal fusion models directly use neural fiber tractography (i.e., structural connectivity, short for SC) to determine the edges between brain regions and use the signal of brain activities (i.e., BOLD) to characterize the nodes feature. Due to the heterogeneity and complexity between BOLD signals and fiber tractography, such methods can not sufficiently take advantage of the complementary information. Moreover, the previous studies have demonstrated that brain cognitive mechanisms involve multiple co-activated brain regions (i.e., neural circuit) interactions rather than single pairwise interactions

[24, 25]. To overcome the above problem, some researchers began to use hypergraph to characterize brain network [26]

. Hypergraphs are a generalization of graphs, which are increasingly important in data science thanks to the development of combinatorial mathematics and computer science. The most significant difference between hypergraphs and graphs is that each hyperedge in a hypergraph can contain multiple nodes. This feature of hypergraphs is a natural superiority to analyze the neural circuit in brain network. On the other hand, Generative Adversarial Network (GAN)

is nowadays the dominant method for processing multimodal medical images. GAN has a strong ability to deal with unsupervised learning tasks. Motivated by this advantage, we devise a hypergraph Generative Adversarial Networks (HGGAN) to characterize the multimodal connectivity of brain network based on the hypergraph theory for AD analysis.

In this paper, we propose a HGGAN to generate multimodal connectivity from rs-fMRI and DTI. We design the generator of HGGAN using the Interactive Hyperedge Neurons(IHEN) module, which is an improvement of recent work HNHN [33]. Compared with classical CNN-based GAN that can only operate on Euclidean data, our proposed model can learn intrinsic relationships and complementary information based on hypergraph structure multimodal imaging data.

Figure 1 shows the proposed framework for multimodal connectivity generation. Specifically, we first extract the BOLD time series of each brain region (90 regions in total) from rs-fMRI data by using AAL atlas [34]. We constructed SC from DTI data by using PANDA [36]. We use BOLD to: (i) represent the features of nodes and (ii) calculate the incidence matrix of the hypergraph through the OHGH algorithm. And we use SC to calculate the features of hyperedges. In this way the features of nodes, the incidence matrix, and the features of hyperedges were fed into the generator to generate the multimodal connectivity. Simultaneously, we utilize GRETNA [35] to obtain functional connectivity (FC), and FC is used as real samples to train the discriminator.

Preprocessing of rs-fMRI data uses the DPARSF [37] toolbox and the GRETNA toolbox based on the data analysis software statistical parameter mapping (SPM12) [38]. First we use DPARSF to preprocess the initial DICOM format of rs-fMRI data into NIFTI format data. We apply the standard steps for rs-fMRI data preprocessing, including the discarding of the first 20 volumes, head motion correction, spatial normalization, and Gaussian smoothing in this stage. Then we use the AAL atlas to divide brain space into 90 brain regions-of-interest (ROIs). Finally, we send these NIFTI format data into the brain network analysis toolbox GRETNA to extract the BOLD time series corresponding to ROIs. We utilized DPARSF to obtain BOLD time series and we utilized GRETNA to obtain FC matrix. Also by using the AAL atlas, Preprocessing of DTI data uses the PANDA toolbox so that the number of white matter fiber tractography can be regarded as strength of physical connections in the 90×90 SC matrix.

We first introduce the basic concepts and notations of hypergraphs. We define a hypergraph H=(V,E) to consist of a set V of nodes and set E of hyperedges, where each hyperedge itself is a set of nodes. Let n=|V| and m=|E|. We label the nodes as vi for i∈{1,⋯,n}, and the hyperedges as ej for j∈{1,⋯,m}. The incidence matrix A∈Rn×m of hypergraph H is denoted by

Now we can give OHGH as follows

With the optimal homomorphism hypergraph H, we construct the hypergraphs {Hk} for every subject by concatenating H and H′k (i.e., Hk=H||H′k). Furthermore, we obtain the incidence matrices {Ak} based on {Hk}.

The proposed generator G is composed of L multi-layer Interactive Hyperedge Neurons modules (IHEN). The definition of IHEN is given as follows

Combining the multimodal connectivity matrix Mk with the nodes features X(L)k,V , we give the nodes correlation coefficients as follows:

The discriminator D is a normal MLP architecture, which can compare the difference of distributions between the FC matrix and the multimodal connectivity matrix by using random walk. Fixing an arbitrary node vr0, we take vr0 as the starting point for the random walk. The termination condition of the random walk is that the point comes back to the position of the previous step at some step of random walk. For example, a random walk having T-steps and eventually stopping at the vrT means that the path [vr0,vr1,⋯,vrT−1,vrT,vrT+1] satisfies vrT−1=vrT+1, and we say the vrT is the endpoint of the path. For the FC matrix of the k

-th subject, the probability of walking through the path

Let Path(vr0,v) be the set of paths with the starting point at vr0 and the endpoint at v, then the conditional probability about vr0 is given as follows

Similarly, for the multimodal connectivity matrix of the k-th subject, the probability of walking through the path [vr0,vr1,⋯,vrT−1,vrT,vrT+1] is given by

and conditional probability about vr0 is that

The loss function of discriminator is formulated by

where K represents the total number of subject in the training dataset.

The loss function of the generators depends on the feedback of discriminator, which is formulated by

In order to evaluate the performance of the multimodal connectivity matrix(MC) generated by our proposed method, six binary classification experiments including AD vs. NC, AD vs. EMCI , AD vs. LMCI, EMCI vs. NC , LMCI vs. NC, and EMCI vs. LMCI are designed to validate the prediction performance. We use prediction accuracy (ACC), sensitivity (SEN), specificity (SPE) to measure the results of our experiments.

We compare the average correlation coefficient in eq.(2) between each corresponding node of the AD group and the NC group. The result are shown in Fig 3. We choose the top 7 nodes in Fig 3 (c), the IDs of these node are 37,38,39,41,83,84, and 87, which represent Hippocampus_L, Hippocampus_R, ParaHippocampal_L, Amygdala_L, Temporal_Pole_Sup_L, Temporal_Pole_Sup_R, and Temporal_Pole_ Mid_L. We can see that these brain regions are mainly concentrated on the memory and reasoning areas, which are highly related to the AD according to the clinical studies [44]. Fig 4 and Fig 5 show the connection relationship of these top 7 brain regions by using MC matrix. We display the connection relationship graph of brain regions from the perspective of the sagittal plane view, axial plane view, and coronal plane view.

In this paper, we proposed a novel hypergraph generative adversarial network (HGGAN) to generate individual multimodal connectivity matrix by using corresponding rs-fMRI and DTI data. We designed the Interactive Hyperedge Neurons module such that the generators can efficiently capture the complex relationship between rs-fMRI and DTI. Moreover, we proposed the Optimal Hypergraph Homomorphism algorithm to construct hypergraph structure data, which significantly improved the robustness of the generation results. The analyses of the experimental results proved that the proposed method successfully extracted the interrelated hidden structures and complementary information from different modal data. Although this paper only focuses on AD, it is worth mention that the proposed model can be easily extended to other neurodegenerative disease.