In many applications, survey data are collected from different survey centers in different regions. It happens that in some circumstances, response variables are completely observed while the covariates have missing values. In this paper, we propose a joint spatial regression model for the response variable and missing covariates via a sequence of one-dimensional conditional spatial regression models. We further construct a joint spatial model for missing covariate data mechanisms. The properties of the proposed models are examined and a Markov chain Monte Carlo sampling algorithm is used to sample from the posterior distribution. In addition, the Bayesian model comparison criteria, the modified Deviance Information Criterion (mDIC) and the modified Logarithm of the Pseudo-Marginal Likelihood (mLPML), are developed to assess the fit of spatial regression models for spatial data. Extensive simulation studies are carried out to examine empirical performance of the proposed methods. We further apply the proposed methodology to analyze a real data set from a Chinese Health and Nutrition Survey (CHNS) conducted in 2011. 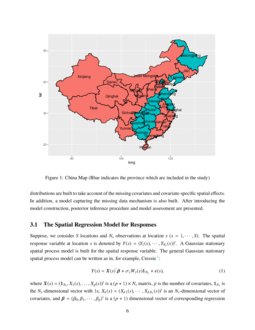 , there are different approaches for modelling spatially dependent data, such as the conditional autoregressive model (CAR), the simultaneous autoregressive model (SAR), and the linear regression model with spatial random effects. For the areal data, CAR and SAR are two widely used models. The study region is partitioned into a finite number of areal units with well-defined boundaries

1. The spatial correlation structure depends on adjacency matrix of subareas. The CAR model is appropriate for situations with the first order dependency or a relatively local spatial autocorrelation, which assumes that a particular area is influenced by its neighbors. However, the SAR model is more suitable where there is the second order dependency or a more global spatial autocorrelation. The locations of the point reference data vary continuously over the study region. The spatial correlation structure depends on the distance between the locations. The most popular model for point reference data is the regression model with Gaussian spatial random effects 3. Another challenge for analyzing such kind of data is that there exist some missing covariates. Household income data are collected from surveys, so it is common for us to get incomplete data for some covariates. There is rich literature on building regression models with missing covariates. Zhao et al. 4

used estimating equations for regression analysis in the presence of missing observations on one covariate.

In this paper, we develop a Bayesian spatial regression model to deal with the spatially dependent data with missing covariates using the idea from Ibrahim et al. 5. We assume that the missing covariates are spatially dependent and build hierarchical spatial regression models for both the response variable and missing covariates. Furthermore, we propose the modified Deviance Information Criterion (mDIC) and the modified Logarithm of the Pseudo-Marginal Likelihood (mLPML). One of the main focus of this paper is on the examination of the impact of spatial effects in the missing covariates models on the spatial response model. Our proposed mDIC and mLPML criteria allow us to assess the fit of the spatial response data under covariates models with or without spatial effects. We further conduct extensive simulation studies to examine the empirical performance of the proposed criteria. Such investigation and assessment have not been carried out in the literature based on our best knowledge.

The remainder of this paper is organized as follows. In Section 2, the data from Chinese Health and Nutrition Survey (CHNS) 2011 are introduced as a motivating example. In Section 3, we develop the spatial regression model for the response variable, the model for missing covariates with spatial random effects, and the model for the missing data mechanism. Furthermore, Bayesian model assessment criteria including mDIC and mLPML are used for model comparison. An extensive simulation study is conducted in Section 4 to investigate empirical performance of the models proposed in Section 3. In Section 5, the proposed method is employed to analyze the real data set of CHNS 2011. Finally, we conclude the paper with a brief discussion in Section 6.

Chinese Health and Nutrition Survey (CHNS), a project collaborated by the Carolina Population Center at the University of North Carolina and the National Institute for Nutrition and Health at the Chinese Center for Disease Control and Prevention, aims to examine the relationship between the social and economic transformation of Chinese society and the health and nutritional status of its population. As a geographically distributed data set, CHNS 2011 collected individual-, household- and community-specific information from 12 provinces in China. In this paper, household income from 12 provinces is selected as the spatial response variable, and the aim is to explore the spatial effects and the factors that may have impacts on this variable of interest.

The data were collected from 12 provinces in China with a total sample size of 4346. Household income (hincome) is the response variable. Individual-level covariates include wage of head of the household (indwage), age of head of the household (age), proportion of urban area (urban), number of hours worked last year (WThour), family size (hhsize) and GDP per capita of the province (GDP). The units of hincome, indwage and GDP are CNY.

The sample sizes in different provinces as well as the summary information of the variables are shown in Table 1.

In the CHNS 2011 data set, we do not have survey data for all the provinces in China. Also, the provinces included in this data set are not always neighbored with each other. Thus, we treat the CHNS 2011 data as point-referenced data such that the spatial dependence can be possibly and reasonably captured by the distance between two provinces especially when they are away from each other. The centroid latitudes and longitudes of these 12 provinces are given in Table 3. Figure 1 shows the map of mainland China. The provinces which are included in our study are marked in blue color.

Using the coordinates of 12 provinces, we can easily calculate the distance between two provinces. These distances are useful to construct covariance matrices of the spatial random effects in Section 5 below.

3.1 The Spatial Regression Model for Responses

Suppose, we consider S locations and Ns observations at location s (s=1,⋯,S). The spatial response variable at location s is denoted by Y(s)=(Y1(s),⋯,YNs(s))′. A Gaussian stationary spatial process model is built for the spatial response variable. The general Gaussian stationary spatial process model can be written as in, for example, Cressie 3:

is the white noise process such that

INs is the Ns×Nsidentity matrix, and Cov(ϵ(s),ϵ(s′))=0 for s≠s′. According to (1), the following spatial hierarchical model is built:

is a vector of the standard deviations of the spatially structured random errors of the covariates,

There are many possibilities in (4), especially when q is large. Chen and Ibrahim 14

where X(−2)i(s)=(X1i(s),(Xobsi(s))′)′ denotes a vector of the other covariates except X2i(s), α1 and α2 are the indexing parameter vectors for the distributions of X1i(s) and X2i(s), respectively, τx1 and τx2 are the precision parameters of X1i(s) and X2i(s), σx1 and σx2 are the standard deviations of Wx1 and Wx2, and λx1 and λx2 are the corresponding range parameters for spatial correlations of Wx1 and Wx2, which are different than λy defined in (3).

). The joint distribution of

Rℓi(s) can also be written as the form of a product of one-dimensional conditional distributions, that is

are prespecified hyperparameters. In this article, we use

ψβk=ψαℓk=ψσy=ψσxℓ=ψϕℓk=0.001, ay=by=axℓ=bxℓ=0.001, and ψλy=ψλxℓ=1, which lead to non-informative priors. With the above prior distributions, the posterior distribution of these unknown parameters based on the observed data Dobs ={Y,Xobs} with Xobs={Xobs(s)}Ss=1 is given by

where f(Y(s)|Wy(s),X(s),β,σy,τy) refers to the spatial regression model for the response variable in (2), f(Xmisi(s)|Xobsi(s),Wx(s),α,σx,τx) is defined in (4), and f(Ri(s)|Xi(s),Yi(s),ϕ) is defined in (3.3) . In equation (6), f(Wy|λy) and f(Wx|λx)=∏qℓ=1f(Wxℓ|λxℓ) refer to the distributions of Wy and Wxℓ’s, respectively, dWx=∏qℓ=1dWxℓ, and π(θ) denotes the joint prior distribution of the unknown parameters. When a MAR missing data mechanism is assumed, the model for the missing data mechanism does not need to enter the posterior distribution.

Within the Bayesian framework, the Deviance Information Criterion (DIC) 16 and the Logarithm of the Pseudo-Marginal Likelihood (LPML) 17 are two well-known Bayesian criteria for model comparison.

Since our main objective is to assess the fit of the spatial regression model for the response, we specify the following deviance function:

Therefore, we define a modified DIC (mDIC) for the response model as follows:

where ^Wy,^X,^β,^σy, and ^τy are the posterior means of parameters and missing covariates. A smaller value of mDIC indicates a better model.

where π(Wy,X,β,σy,λy,τy|D(−i)(s))=∏Ss=1∏j≠if(Yj(s)|Wy(s),X(s),β,σy,τy)π(Wy,X,β,σy,τy)c(D(−i)(s)) and c(D(−i)(s)) denotes the normalizing constant. In practice, a Monte Carlo estimate of mCPO using MCMC algorithms from the posterior distributions can be used. To be specific, letting Wyt(s),Xt(s),βt,σyt, and τyt (t=1,⋯,T) denote a MCMC sample of unknown parameters and missing covariates from the corresponding augmented posterior distribution, a Monte Carlo estimate of mCPO−1i is given by

Then mLPML is given by

Similar to the conventional LPML, a larger value of mLPML indicates a more favorable model.

In this simulation study, we randomly generated 20 locations in a space of [0,20]×[0,20]. For each location, we generated 50 observations based on

According to Section 3, we set up the following model M1 and fix the parameters related to Wy,Wx2,Wx3 to their true values. The spatial regression model for the response variable is given as

The models for the two missing covariates are given as

β1 as an example, these measures are given as

where β01 is the true value of β1 and T is the total number of simulated datasets while ^β1t is the posterior mean of β1. sd(β1t) is the estimated standard deviation of β1, and HPD(β1t) is the estimated 95% highest probability density (HPD) interval of β1 computed from the tth simulated dataset for t=1,⋯,T. Bayesian estimates are obtained via JAGS19 and R20. With the thinning interval to be 20, 5,000 samples are kept for calculation after a burn-in of 10,000 samples. The results of these measures with all records, CC analysis, and model M1 proposed above are shown in Table 4. The difference between “all records", “CC" and “M1” is on the datasets used to fit the proposed model. “All records" means using the whole dataset before generating the missing ones, “CC" means using the datasets excluding the missing records, and “M1” means using the datasets with missing values.

From Table 4, we can observe that the biases of the posterior estimates under CC are much greater than those under model M1. The 95% HPD intervals under M1 are larger than those under CC. Thus, M1 is more preferred than the CC analysis.

In order to assess the performance of the model comparison criteria proposed in Section 3.5, we set up several alternative models with the same response model as M1 but with different missing covariate models as follows: