A regression-based BNN model is proposed to predict spatiotemporal quantities like hourly rider demand with calibrated uncertainties. The main contributions of this paper are (i) A feed-forward deterministic neural network (DetNN) architecture that predicts cyclical time series data with sensitivity to anomalous forecasting events; (ii) A Bayesian framework applying SVGD to train large neural networks for such tasks, capable of producing time series predictions as well as measures of uncertainty surrounding the predictions. Experiments show that the proposed BNN reduces average estimation error by 10 across 8 U.S. cities compared to a fine-tuned multilayer perceptron (MLP), and 4 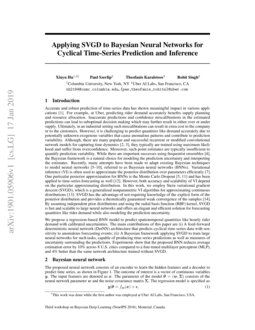 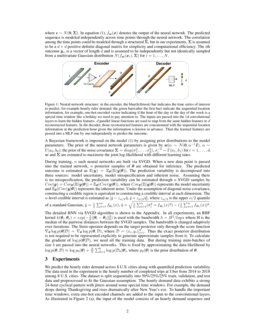 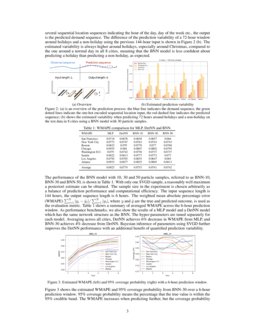 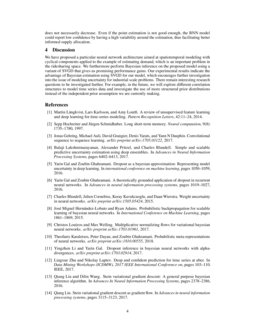 Accurate and robust prediction of time-series data has shown meaningful impact in various applications (Längkvist et al., 2014). For example, at Uber, predicting rider demand accurately benefits supply planning and resource allocation. Inaccurate predictions and confidence miscalibrations in the estimated predictions can lead to suboptimal decision making which may further result in either over or under supply. Ultimately, in an industrial setting such miscalibrations can result in extra cost to the company or to the customers. However, it is challenging to predict quantities like demand accurately due to potentially unknown exogenous variables that cause anomalous patterns and contribute to prediction variability. Although, there are many popular and successful recurrent or modified convolutional network models for capturing time dynamics (Hochreiter and Schmidhuber, 1997; Gehring et al., 2017), they typically are trained using maximum likelihood and suffer from overconfidence. Moreover, such point estimates are typically insufficient to quantify prediction variability. While there are important successes using frequentist ensembles Lakshminarayanan et al. (2017), the Bayesian framework is a natural choice for modeling the prediction uncertainty and interpreting the estimates. Recently, many attempts have been made to adapt existing Bayesian techniques to model neural networks (Gal and Ghahramani, 2016a, b; Blundell et al., 2015; Hernández-Lobato and Adams, 2015; Louizos and Welling, 2017; Karaletsos et al., 2018), referred to as Bayesian neural networks (BNNs). Variational inference (VI) is often used to approximate the posterior distribution over parameters efficiently (Blundell et al., 2015). One particular posterior approximation for BNNs is the Monte Carlo Dropout (Gal and Ghahramani, 2016a; Li and Gal, 2017) and has been applied to time-series forecasting as well (Zhu and Laptev, 2017). However, both accuracy and scalability of VI depend on the particular approximating distribution. In this work, we employ Stein variational gradient descent (SVGD), which is a generalized nonparametric VI algorithm for approximating continuous distributions (Liu and Wang, 2016). SVGD has the advantage of not requiring knowledge of the explicit form of the posterior distribution and provides a theoretically guaranteed weak convergence of the samples (Liu, 2017)

. By assuming independent prior distributions and using the radial basis function (RBF) kernel, SVGD is fast and scalable to large neural networks and offers an elegant and efficient solution for forecasting quantities like rider demand while also modeling the prediction uncertainty.

We propose a regression-based BNN model to predict spatiotemporal quantities like hourly rider demand with calibrated uncertainties. The main contributions of this paper are (i) A feed-forward deterministic neural network (DetNN) architecture that predicts cyclical time series data with sensitivity to anomalous forecasting events; (ii) A Bayesian framework applying SVGD to train large neural networks for such tasks, capable of producing time series predictions as well as measures of uncertainty surrounding the predictions. Experiments show that the proposed BNN reduces average estimation error by 10% across 8 U.S. cities compared to a fine-tuned multilayer perceptron (MLP), and 4% better than the same network architecture trained without SVGD.

The proposed neural network consists of an encoder to learn the hidden features and a decoder to predict time series, as shown in Figure 1

. The outcome of interest is a vector of continuous variables

y. The input features are denoted as x. The parameter of the model θ=(w,Σ) consists of the neural network parameter w and the noise covariance matrix Σ. The regression model is specified as:

where ϵ∼N(0,Σ). In equation (1), fw(x) denotes the output of the neural network. The predicted sequence is modeled independently across time points through the neural network. The correlation among the time points could be modeled through a structured Σ, but in our experiments, Σ is assumed to be a d×d positive definite diagonal matrix for simplicity and computational efficiency. The ith outcome yi, is a vector of length d

A Bayesian framework is imposed on the model (1) by assigning prior distributions to the model parameters. The prior of the neural network parameters is given by w|α∼N(0,α−1I), α∼Γ(a0,b0); the prior of the noise covariance Σ=diag(σ21,…,σ2d), σ−2i∼Γ(a1,b1) for i=1,…,d. w and Σ are esimated to maximzie the joint log-likelihood with different learning rates.

During training, n such neural networks are built via SVGD. When a new data point is passed into the trained network, n posterior samples of θ are obtained for inference. The predicted outcome is estimated as E(y)=Eθ(E(y|θ)). The prediction variability is decomposed into three sources: model uncertainty, model misspecification and inherent noise. Assuming there is no misspecification, the prediction variability can be estimated through n SVGD samples by Cov(y)=Covθ(E(y|θ))+Eθ(Cov(y|θ)), where Covθ(E(y|θ)) represents the model uncertainty and Eθ(Cov(y|θ))

The detailed BNN via SVGD algorithm is shown in the Appendix. In all experiments, an RBF kernel k(θi,θj)=exp(−1h||θi−θj||22) is used with the bandwidth h=H2/logn where H is the median of the pairwise distances between the SVGD samples. The bandwidth is changed adaptively over iterations. The Stein operator depends on the target posterior only through the score function ∇θlogp(θ|D)=∇θlogp(θ,D), where D=(xi,yi)Ni=1. Thus the exact posterior distribution is not required to be represented explicitly to generate approximate samples from it. To calculate the gradient of logp(θ|D), we need all the training data. But during training mini-batches of size b are passed into the neural networks. This is fixed by approximating the data likelihood by logp(θ,D)≈logp0(θ)+Nb∑bk=1logp(Dk|θ), where p0(θ) is the prior distribution of θ.

We predict the hourly rider demand across 8 U.S. cities along with quantified prediction variability. The data used in the experiment is the hourly number of completed trips at Uber from 2014 to 2018 among 8 U.S. cities. The dataset is split sequentially into 50%/25%/25% train, validation, and test data and preprocessed to fit the Gaussian assumption. The hourly demand data exhibits a strong 24-hour cyclical pattern with jitters around some special time windows. For example, the demand drops during Thanksgiving and rises dramatically after New Year’s eve. To handle the important time windows, extra one-hot encoded channels are added to the input to the convolutional layers. As illustrated in Figure 4 (a), the input of the model consists of an hourly demand sequence and several sequential location sequences indicating the hour of the day, day of the week etc., the output is the predicted demand sequence. The difference of the prediction variability of a 72-hour window around holidays and a non-holiday using the previous 144-hour input is shown in Figure 4 (b). The estimated variability is always higher around holidays, especially around Christmas, compared to the one around a normal day in all 8 cities, meaning that the BNN model is less confident about predicting a holiday than predicting a non-holiday, as expected.

. With only one SVGD sample, a reasonably well maximum a posteriori estimate can be obtained. The sample size in the experiment is chosen arbitrarily as a balance of prediction performance and computational efficiency. The input sequence length is 144 hours, the output sequence length is 6 hours. The weighted mean absolute percentage error (WMAPE)

are the true and predicted outcome, is used as the evaluation metric. Table

shows a summary of averaged WMAPE across the 6-hour prediction window. As performance benchmarks, we also show the results of a MLP model and a DetNN model which has the same network structure as the BNN. The hyper-parameters are tuned separately for each model. Averaging across all cities, DetNN achieves 6% decrease in WMAPE from MLP, and BNN-30 achieves 4% decrease from DetNN. Bayesian inference of parameters using SVGD further improves the DetNN performance with an additional benefit of quantified prediction variability.

We have proposed a particular neural network architecture aimed at spatiotemporal modeling with cyclical components applied to the example of estimating demand, which is an important problem in the ridesharing space. We furthermore perform Bayesian inference on the proposed model using a variant of SVGD that gives us promising performance gains. Our experimental results indicate the advantage of Bayesian estimation using SVGD for our model, which encourages further investigation into the issue of modeling uncertainty for industrial scale problems. There remain interesting research questions to be investigated further. For example, in the future, we will explore different correlation structures to model time series data and investigate the use of more structured prior distributions instead of the independent prior assumption we are currently making.