An Illustrated Introduction to the Truncated Fourier Transform

The Truncated Fourier Transform (TFT) is a variation of the Discrete Fourier Transform (DFT/FFT) that allows for input vectors that do NOT have length 2^n for n a positive integer. We present the univariate version of the TFT, originally due to Joris van der Hoeven, heavily illustrating the presentation in order to make these methods accessible to a broader audience. 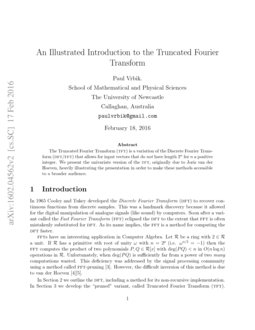 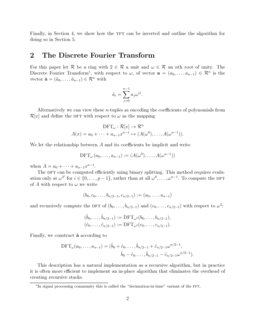 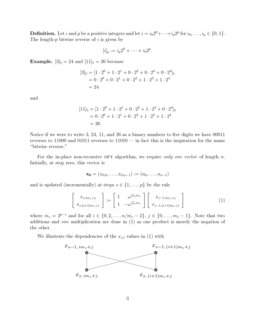 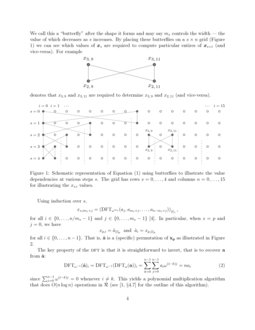 The Fourier Transform is one of the most important linear transformation...
Nir Ailon, et al. ∙

midiVERTO: A Web Application to Visualize Tonality in Real Time

This paper presents a web application for visualizing the tonality of a ...
Daniel Harasim, et al. ∙

Numerical Algorithms for the Computation of Generalized Prolate Spheroidal Functions

In 1965 Cooley and Tukey developed the Discrete Fourier Transform (dft) to recover continuous functions from discrete samples. This was a landmark discovery because it allowed for the digital manipulation of analogue signals (like sound) by computers. Soon after a variant called the Fast Fourier Transform (fft) eclipsed the dft to the extent that fft is often mistakenly substituted for dft. As its name implies, the fft is a method for computing the dft faster.

ffts have an interesting application in Computer Algebra. Let R be a ring with 2∈R a unit. If R has a primitive nth root of unity ω with n=2p (i.e. ωn/2=−1) then the fft computes the product of two polynomials P,Q∈R[x] with deg(PQ)<n in O(nlogn) operations in R. Unfortunately, when deg(PQ) is sufficiently far from a power of two many computations wasted. This deficiency was addressed by the signal processing community using a method called fft-pruning [3]. However, the difficult inversion of this method is due to van der Hoeven [4][5].

In Section 2 we outline the dft, including a method for its non-recursive implementation. In Section 3 we develop the “pruned” variant, called Truncated Fourier Transform (tft). Finally, in Section 4, we show how the tft can be inverted and outline the algorithm for doing so in Section 5.

For this paper let R be a ring with 2∈R a unit and ω∈R an nth root of unity. The Discrete Fourier Transform***In signal processing community this is called the “decimation-in-time” variant of the fft., with respect to ω, of vector a=(a0,…,an−1)∈Rn is the vector ^a=(^a0,…,^an−1)∈Rn with

The dft can be computed efficiently using binary splitting. This method requires evaluation only at ω2i for i∈{0,…,p−1}, rather than at all ω0,…,ωn−1. To compute the dft of A with respect to ω we write

Finally, we construct ^a according to

This description has a natural implementation as a recursive algorithm, but in practice it is often more efficient to implement an in-place algorithm that eliminates the overhead of creating recursive stacks.

For the in-place non-recursive dft algorithm, we require only one vector of length n. Initially, at step zero, this vector is

and is updated (incrementally) at steps s∈{1,…,p} by the rule

We illustrate the dependencies of the xs,i values in (1) with

We call this a “butterfly” after the shape it forms and may say ms controls the width — the value of which decreases as s increases. By placing these butterflies on a s×n grid (Figure 1) we can see which values of xs are required to compute particular entires of xs+1 (and vice-versa). For example

The key property of the dft is that it is straightforward to invert, that is to recover a from ^a:

since ∑n−1j=0ω(i−k)j=0 whenever i≠k. This yields a polynomial multiplication algorithm that does O(nlogn) operations in R (see [1, §4.7] for the outline of this algorithm).

The motivation behind the Truncated Fourier Transform (tft) is the observation that many computations are wasted when the length of a (the input) is not a power of two.†††The tft is exactly equivalent to a technique called “fft pruning” in the signal processing literature [3]. This is entirely the fault of the strategy where one “completes” the ℓ-tuple a=(a0,…,aℓ−1) by setting ai=0 when i≥ℓ to artificially extend the length of a to the nearest power of two (so the dft can be executed as usual).

However, despite the fact that we may only want ℓ components of ^a, the dft will calculate all of them. Thus computation is wasted. We illustrate this in Figures 3 and 4. This type of wasted computation is relevant when using the dft to multiply polynomials — their products are rarely of degree one less some power of two.

The definition of the tft is similar to that of the dft with the exception that the input and output vector (a resp. ^a) are not necessarily of length some power of two. More precisely the tft of an ℓ-tuple (a0,…,aℓ−1)∈Rℓ is the ℓ-tuple

van der Hoeven [4] gives a more general description of the tft where one can choose an initial vector (x0,i0,…,x0,in) and target vector (xp,j0,…,xp,jn). Provided the ik’s are distinct one can carry out the tft by considering the full dft and removing all computations not required for the desired output. In this paper, we restrict our discussion to that of the scenario in Figure 4 (where the input and output are the same initial segments) because it can be used for polynomial multiplication, and because it yields the most improvement. ⋄

If we only allow ourselves to operate in a size n vector it is straightforward to modify the in-place dft algorithm from the previous section to execute the tft. (It should be emphasized that this only saves computation and not space. For a “true” in-place tft algorithm that operates in an array of size ℓ, see Harvey and Roche’s [2].) At stage s it suffices to compute (xs,0,…,xs,j) with j=⌈ℓ/ms⌉ms−1 where ms=2p−s.‡‡‡This is a correction to the bound given in [5] as pointed out in [4].

more values. Therefore, in total, we compute at most

Unfortunately, the tft cannot be inverted by merely doing another tft with ω−1 and adjusting the output by some constant factor like inverse of the dft. Simply put: we are missing information and must account for this.

Now, to show the tft of this with respect to ω−1 is not a, define

which is not a constant multiple of TFTω(a).

are known, that the other values can be deduced. That is, if two values of some butterfly are known then the other two values can be calculated using (1) as the relevant matrix is invertible. Moreover, these relations only involve shifting (multiplication and division by two), additions, subtractions and multiplications by roots of unity — an ideal scenario for implementation.

As with dft, observe that xp−k,0,…,xp−k,2k−1 can be calculated from xp,0,…,xp,2k−1. This is because all the butterfly relations necessary to move up like this never require xs,2k+j for any s∈{p−k,…,p} and j>0. This is illustrated in Figure 5. More generally, we have that

is sufficient information to compute

provided that 0<k≤j<p. (In Algorithm 1, that follows, we call this a “self-contained push up”.)

Finally, in this section, we present a simple recursive description of the inverse tft algorithm for the case we have restricted ourselves to (all zeroes packed at the end). The algorithm operates in a length n array x=(x0,…,xn−1) for which we assume access; here n=2p corresponds to ω, a nth primitive root of unity. Initially, the content of the array is

In keeping with our “Illustrated” description we use pictures, like Figure 6, to indicate what values are known (solid dots ∙) and what value to calculate (empty dot ∘). For instance, “push down xk with Figure 6”, is shorthand for: use xk=xs−1,ims+j and xk+ms+j=xs−1,(i+1)ms+j to determine xs,ims+j. We emphasize with an arrow that this new value should also overwrite the one at xk. This calculation is easily accomplished using (1) with a caveat: the values i and j are not explicitly known. What is known is s, and therefore ms, and some array position k. Observe that i is recovered by i=k quo ms (the quotient of k/ms).

The full description of the inverse tft follows in Algorithm 1; note that the initial call is InvTFT(0,ℓ−1,n−1,1). A visual depiction of Algorithm 1 is given in Figure 9. A sketch of a proof of its correctness follows.

Algorithm 1, initially called with InvTFT(0,ℓ−1,n−1,1) and given access to the zero-indexed length n array

Let headi, taili, and lasti be the values of head, tail, and last at the ith recursive call. Consider the integer sequences given by

If headi>taili then we have termination. Otherwise, either branch (7) executes giving

Figure 7 and Figure 8 demonstrate that self contained regions can be exploited to obtain the initial values required to complete the inversion. That is to say, for n∈{0,…,p−1}, that

can always be calculated from

The Truncated Fourier Transform is a novel and elegant way to reduce the number of computations of a dft-based computation by a possible factor of two (which may be significant). Additionally, with the advent of Harvey and Roche’s paper [2], it is possible to save as much space as computation. The hidden “cost” of working with the tft algorithm is the increased difficulty of determining the inverse tft. Although in most cases this is still less costly than the inverse dft, the algorithm is no doubt more difficult to implement.

The author wishes to thank Dr. Dan Roche and Dr. Éric Schost for reading a draft of this paper and offering suggestions.