In this paper, we propose an effective and robust method for acoustic scene analysis based on spatial information extracted from partially synchronized and/or closely located distributed microphones. In the proposed method, to extract spatial information from distributed microphones while taking into account whether any pairs of microphones are synchronized and/or closely located, we derive a new cepstrum feature utilizing a graph-based basis transformation. Specifically, in the proposed graph-based cepstrum, the logarithm of the amplitude in a multichannel observation is converted to a feature vector by an inverse graph Fourier transform, which can consider whether any pair of microphones is connected. Our experimental results indicate that the proposed graph-based cepstrum effectively extracts spatial information with consideration of the microphone connections. Moreover, the results show that the proposed method more robustly classifies acoustic scenes than conventional spatial features when the observed sounds have a large synchronization mismatch between partially synchronized microphone groups. 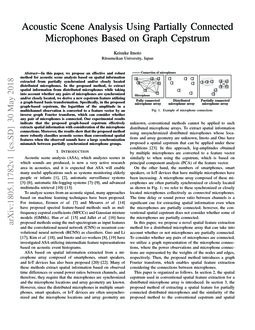 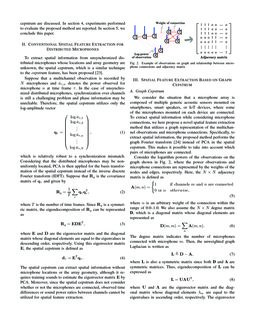 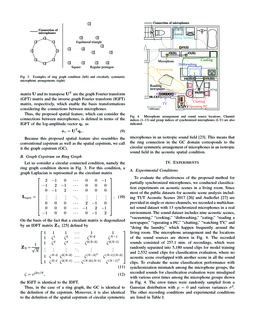 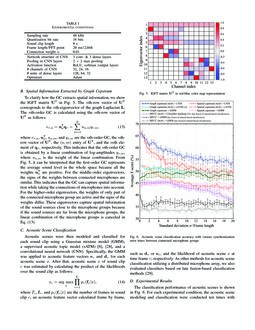 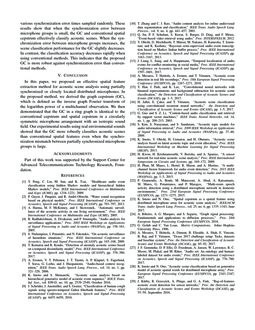 Acoustic scene analysis (ASA), which analyzes scenes in which sounds are produced, is now a very active research area in acoustics, and it is expected that ASA will enable many useful applications such as systems monitoring elderly people or infants [1, 2], automatic surveillance systems [3, 4, 5, 6], automatic file-logging systems [7, 8, 9], and advanced multimedia retrieval [10, 11, 12, 13].

To analyze scenes from an acoustic signal, many approaches based on machine learning techniques have been proposed. For instance, Eronen

ASA based on spatial information extracted from a microphone array composed of smartphones, smart speakers, and IoT devices has also been proposed [20, 21, 22]. Many of these methods extract spatial information based on observed time differences or sound power ratios between channels, and therefore, they require that the microphones are synchronized and the microphone locations and array geometry are known. However, since the distributed microphones in multiple smartphones, smart speakers, or IoT devices are often unsynchronized and the microphone locations and array geometry are unknown, conventional methods cannot be applied to such distributed microphone arrays. To extract spatial information using unsynchronized distributed microphones whose locations and array geometry are unknown, Imoto and Ono have proposed a spatial cepstrum that can be applied under these conditions [23]

. In this approach, log-amplitudes obtained by multiple microphones are converted to a feature vector similarly to when using the cepstrum, which is based on principal component analysis (PCA) of the feature vector.

To extract spatial information from unsynchronized distributed microphones whose locations and array geometry are unknown, the spatial cepstrum, which is a similar technique to the cepstrum feature, has been proposed [23].

Suppose that a multichannel observation is recorded by N microphones and ¯aτ,n denotes the power observed for microphone n at time frame τ. In the case of unsynchronized distributed microphones, synchronization over channels is still a challenging problem and phase information may be unreliable. Therefore, the spatial cepstrum utilizes only the log-amplitude vector

which is relatively robust to a synchronization mismatch. Considering that the distributed microphones may be non-uniformly located, PCA is then applied for the basis transformation of the spatial cepstrum instead of the inverse discrete Fourier transform (IDFT). Suppose that Rq is the covariance matrix of qτ and given by

where T is the number of time frames. Since Rq is a symmetric matrix, the eigendecomposition of Rq can be represented as

where E and D

E, the spatial cepstrum is defined as

The spatial cepstrum can extract spatial information without microphone locations or the array geometry, although it requires training sounds to estimate the eigenvector matrix

E by PCA. Moreover, since the spatial cepstrum does not consider whether or not the microphones are connected, observed time differences or sound power ratios between channels cannot be utilized for spatial feature extraction.

We consider the situation that a microphone array is composed of multiple generic acoustic sensors mounted on smartphones, smart speakers, or IoT devices, where some of the microphones mounted on each device are connected. To extract spatial information while considering microphone connections, we here propose a novel spatial feature extraction method that utilizes a graph representation of the multichannel observations and microphone connections. Specifically, to extract spatial information, the proposed method performs the graph Fourier transform [24] instead of PCA in the spatial cepstrum. This makes it possible to take into account which pairs of microphones are connected.

Consider the logarithm powers of the observations on the graph shown in Fig. 2, where the power observations and microphone connections are represented by the weights of the nodes and edges, respectively. Here, the N×N adjacency matrix is defined as

where α is an arbitrary weight of the connection within the range of 0.0–1.0. We also assume the N×N degree matrix D, which is a diagonal matrix whose diagonal elements are represented as

The degree matrix indicates the number of microphones connected with microphone m. Then, the unweighted graph Laplacian is written as

where U and Λ are the eigenvector matrix and the diagonal matrix whose diagonal elements λm are equal to the eigenvalues in ascending order, respectively. The eigenvector matrix UT and its transpose U are the graph Fourier transform (GFT) matrix and the inverse graph Fourier transform (IGFT) matrix, respectively, which enable the basis transformations considering the connections between microphones.

Thus, the proposed spatial feature, which can consider the connections between microphones, is defined in terms of the IGFT of the log-amplitude vector qτ as

Because this proposed spatial feature also resembles the conventional cepstrum as well as the spatial cepstrum, we call it the graph cepstrum (GC).

Let us consider a circular connected condition, namely the ring graph condition shown in Fig. 3. For this condition, a graph Laplacian is represented as the circulant matrix

To evaluate the effectiveness of the proposed method for partially synchronized microphones, we conducted classification experiments on acoustic scenes in a living room. Since most of the public datasets for acoustic scene analysis including TUT Acoustic Scenes 2017 [26] and AudioSet [27] are provided in single or stereo channels, we recorded a multichannel sound dataset with 13 synchronized microphones in a real environment. The sound dataset includes nine acoustic scenes, “vacuuming,” “cooking,” “dishwashing,” “eating,” “reading a newspaper,” “operating a PC,” “chatting,” “watching TV,” and “doing the laundry,” which happen frequently around the living room. The microphone arrangement and the locations of the sound sources are shown in Fig. 4

. The error times were randomly sampled from a Gaussian distribution with

Acoustic scenes were then modeled and classified for each sound clip using a Gaussian mixture model (GMM), a supervised acoustic topic model (sATM) [8, 28], and a convolutional neural network (CNN). Specifically, the GMM was applied to acoustic feature vectors eτ and dτ for each acoustic scene x. After that, acoustic scene x of sound clip c was estimated by calculating the product of the likelihoods over the sound clip as follows:

where Tc, fτ, and pτ(fτ|x) are the number of frames in sound clip c, an acoustic feature vector calculated frame by frame, such as dτ or eτ, and the likelihood of acoustic scene x at time frame τ, respectively. As other methods for acoustic scene classification utilizing a distributed microphone array, we also evaluated classifiers based on late fusion-based classification methods [29].

In this paper, we proposed an effective spatial feature extraction method for acoustic scene analysis using partially synchronized or closely located distributed microphones. In the proposed method, we derived the graph cepstrum (GC), which is defined as the inverse graph Fourier transform of the logarithm power of a multichannel observation. We then demonstrated that the GC in a ring graph is identical to the conventional cepstrum and spatial cepstrum in a circularly symmetric microphone arrangement with an isotropic sound field. Our experimental results using real environmental sounds showed that the GC more robustly classifies acoustic scenes than conventional spatial features even when the synchronization mismatch between partially synchronized microphone groups is large.

Part of this work was supported by the Support Center for Advanced Telecommunications Technology Research, Foundation.