The variance, higher order moments, covariance, and joint moments or cumulants are shown to be special cases of a certain tensor in V^⊗ n defined in terms of a collection X_1,...,X_n of V-valued random variables, for an appropriate finite-dimensional real vector space V. A statistical transform is proposed from such collections--finite spatial stochastic processes--to numerical tuples using the Schur-Weyl decomposition of V^⊗ n. It is analogous to the Fourier transform, replacing the periodicity group Z, R, or U(1) with the permutation group S_n. As a test case, we apply the transform to one of the datasets used for benchmarking the Continuous Registration Challenge, the thoracic 4D Computed Tomography (CT) scans from the M.D. Anderson Cancer Center available for download from DIR-Lab. Further applications to morphometry and statistical shape analysis are suggested. 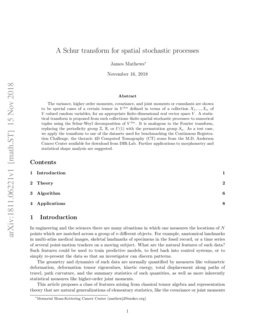 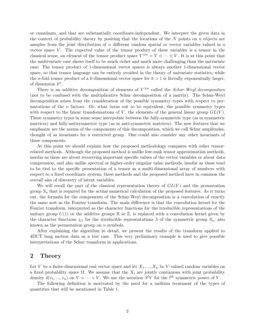 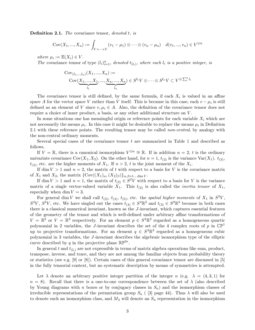 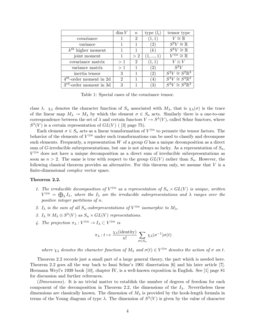 The normalized sequence of moments characterizes the law of any finite-d...
Ilya Chevyrev, et al. ∙

In engineering and the sciences there are many situations in which one measures the locations of N points which are matched across a group of n different objects. For example, anatomical landmarks in multi-atlas medical images, skeletal landmarks of specimens in the fossil record, or a time series of several point-motion trackers on a moving subject. What are the natural features of such data? Such features could be used to train predictive models, to feed back into control systems, or to simply re-present the data so that an investigator can discern patterns.

The geometry and dynamics of such data are normally quantified by measures like volumetric deformation, deformation tensor eigenvalues, kinetic energy, total displacement along paths of travel, path curvature, and the summary statistics of such quantities, as well as more inherently statistical measures like higher-order joint moments.

This article proposes a class of features arising from classical tensor algebra and representation theory that are natural generalizations of elementary statistics, like the covariance or joint moments or cumulants, and that are substantially coordinate-independent. We interpret the given data in the context of probability theory by positing that the locations of the

objects are samples from the joint distribution of

factors. Or, what turns out to be equivalent, the possible symmetry types with respect to the linear transformations of

V, the elements of the general linear group GL(V)

. These symmetry types in some sense interpolate between the fully-symmetric type (as in symmetric matrices) and fully-antisymmetric type (as in anti-symmetric matrices). The new features that we emphasize are the norms of the components of this decomposition, which we call Schur amplitudes, thought of as invariants for a restricted, orthogonal group. One could also consider any other invariants of these components.

We will recall the part of the classical representation theory of GL(V) and the permutation group Sn that is required for the actual numerical calculation of the proposed features. As it turns out, the formula for the components of the Schur-Weyl decomposition is a convolution of exactly the same sort as the Fourier transform. The main difference is that the convolution kernel for the Fourier transform, interpreted as the character functions for the irreducible representations of the unitary group U(1) or the additive groups R or Z, is replaced with a convolution kernel given by the character functions χλ for the irreducible representations λ of the symmetric group Sn, also known as the permutation group on n symbols.

After explaining the algorithm in detail, we present the results of the transform applied to 4DCT lung motion data as a test case. This very preliminary example is used to give possible interpretations of the Schur transform in applications.

Let V be a finite-dimensional real vector space and let X1,...,Xn be V-valued random variables on a fixed probability space Ω. We assume that the Xi are jointly continuous with joint probability density d(v1,...,vn) on V×⋯×V. We use the notation SlV for the lth symmetric power of V.

The following definition is motivated by the need for a uniform treatment of the types of quantities that will be mentioned in Table 1.

The covariance tensor, denoted t, is

The covariance tensor of type (li)ni=1, denoted t(\li), where each li is a positive integer, is

The covariance tensor is still defined, by the same formula, if each Xi is valued in an affine space A for the vector space V rather than V itself. This is because in this case, each v−μi is still defined as an element of V since v,μi∈A. Also, the definition of the covariance tensor does not require a choice of inner product, a basis, or any other additional structure on V.

In some situations one has meaningful origin or reference points for each variable Xi which are not necessarily the means μi. In this case it might be desirable to replace the means μi in Definition 2.1 with these reference points. The resulting tensor may be called non-central, by analogy with the non-central ordinary moments.

Several special cases of the covariance tensor t are summarized in Table 1 and described as follows.

If dimV>1 and n=1, the matrix of t(2)∈S2V with respect to a basis for V is the variance matrix of a single vector-valued variable X1. This t(2) is also called the inertia tensor of X1, especially when dimV=3.

For general dimV we shall call t(3), t(4), t(5), etc. the spatial higher moments of X1 in S3V, S4V, S5V, etc. We have singled out the cases t(4)∈S4R2 and t(3)∈S3R3 because in both cases there is a classical numerical invariant, known as the J-invariant, which captures essential features of the geometry of the tensor and which is well-defined under arbitrary affine transformations of V=R2 or V=R3 respectively. For an element p∈S4R2 regarded as a homogeneous quartic polynomial in 2 variables, the J-invariant describes the set of the 4 complex roots of p in CP1 up to projective transformations. For an element q∈S3R3 regarded as a homogeneous cubic polynomial in 3 variables, the J-invariant describes the algebraic isomorphism type of the elliptic curve described by q in the projective plane RP2∗.

In general t and t(li) are not expressible in terms of matrix algebra operations like sum, product, transpose, inverse, and trace, and they are not among the familiar objects from probability theory or statistics (see e.g. [9] or [8]). Certain cases of this general covariance tensor are discussed in [5] in the fully tensorial context, but no systematic description by means of symmetries is attempted.

Let λ denote an arbitrary positive integer partition of the integer n (e.g. λ=(4,3,1) for n=8). Recall that there is a one-to-one correspondence between the set of λ (also described by Young diagrams with n boxes or by conjugacy classes in Sn) and the isomorphism classes of irreducible representations of the permutation group Sn ([3] page 44). Thus λ will also be used to denote such an isomorphism class, and Mλ will denote an Sn representation in the isomorphism class λ. χλ denotes the character function of Sn associated with Mλ, that is χλ(σ) is the trace of the linear map Mλ→Mλ by which the element σ∈Sn acts. Similarly there is a one-to-one correspondence between the set of λ and certain functors V↦Sλ(V), called Schur functors, where Sλ(V) is a certain representation of GL(V) ([3] page 75).

Each element σ∈Sn acts as a linear transformation of V⊗n to permute the tensor factors. The behavior of the elements of V⊗n

under such transformations can be used to classify and decompose such elements. Frequently, a representation

Theorem 2.2 records just a small part of a large general theory, the part which is needed here. Theorem 2.2 goes all the way back to Issai Schur’s 1901 dissertation [6] and his later article [7]. Hermann Weyl’s 1939 book [10], chapter IV, is a well-known exposition in English. See [1] page 81 for discussion and further references.

). It is no trivial matter to establish the number of degrees of freedom for each component of the decomposition in Theorem

Surprisingly, it follows from the Frobenius formula ([3] page 49) that the values of the character functions χλ for Sn are integers. This implies that the decomposition exists for real V, so we did not need to pass to the complexification VC after all. It also implies that in principle the projection by πλ can be performed exactly by a computer, without special commutative ring calculations and without floating-point approximation.

The projection formula in Theorem 2.2 part 4 is essentially the formula for the Fourier transform, as clarified in Table 3.

We are now ready to define our main object of study, the Schur transform and some of its variants.

Notice that the Schur amplitudes are independent of the order of the variables X1,...,Xn, so that the n-factor Schur content is well-defined. Also, if all Xi are equal to some fixed X, the Schur transform has only one non-zero entry, which is equal to Cov(n)(X)∈SnV.

Each component of the Schur transform has its own interpretation as an encoding of some aspect of the geometric arrangement of the Xi. For example, the ΛnV component quantifies the tendency of the values of the Xi, as displacements from the means of the Xi, to “fill space” by circumscribing an n-dimensional volume. A straightforward geometric interpretation of the vast majority of the other components remains to be discovered.

In practice, information about the joint distribution of random variables X1,...,Xn is given by samples (vj1,...,vjn)j=1..N, presumed to comprise an independent and identically distributed (i.i.d) sample from (X1,...,Xn) of size N.

The sample covariance tensor is

where ¯vi is the sample mean ¯vi=1N∑Nj=1vji.

This section provides the details of the numerical computation of the discrete Schur transform. The author’s implementation is available at http://github.com/schur-transform .

Note that in precomputation step 5, it is not necessary to use the inverse σ−1 as in the formula of Theorem 2.2. In Sn, the conjugacy class c of an element σ is the permutation cycle type, which is the same for σ and its inverse σ−1. Thus χλ(σ)=χλ(σ−1)=χλ(c).

(Feasibility). The algorithm presented above for the precomputation steps is not feasible for large n because it requires iteration over the n! elements of Sn. A more efficient algorithm could be obtained from a closed formula for the sum S(c) over a given conjugacy class c which does not require iteration over the members of c. However, even modestly large values of n present a memory problem for the main computation steps, since the sample covariance tensor has kn numerical components and each projector π(λ) has kn×kn components. For example, for n=10 and k=3, each projector uses over 10 GB of data storage. On the other hand, many of the Schur components πλ(V⊗n) vanish entirely for certain dimensions of V and the corresponding projectors do not need to be calculated (e.g. Λ4V=0 if dimV≤3).

(Exploratory classification and validation). The n-factor Schur content summarizes the geometry of variation across a group of m spatial variables (m≥n). With increasing n, the resolution or complexity of the summary increases. Certain Schur components may be found to discriminate well between groups under different conditions, or certain patterns of Schur amplitudes may be found to characterize commonly occurring types of within-group variation.

(Classification rule). Given a prior stratification of the m matched objects of a given data set into classes, a possible classification rule for an additional (m+1)st object is as follows. For each class, evaluate both the n-factor Schur content C and a modified n-factor Schur content C′ in which the n-fold subsets are replaced by the union of (n−1)-fold subsets with the additional sample. C and C′ are both tuples of distributions, one for each n-partition type λ. Select the class which minimizes, for example, the L1 or L2 difference between the means of C and the means of C′.