A Robust Roll Angle Estimation Algorithm Based on Gradient Descent

This paper presents a robust roll angle estimation algorithm, which is developed from our previously published work, where the roll angle was estimated from a dense disparity map by minimizing a global energy using golden section search algorithm. In this paper, to achieve greater computational efficiency, we utilize gradient descent to optimize the aforementioned global energy. The experimental results illustrate that the proposed roll angle estimation algorithm takes fewer iterations to achieve the same precision as the previous method. 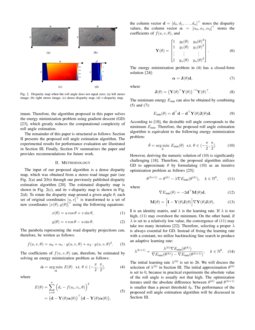 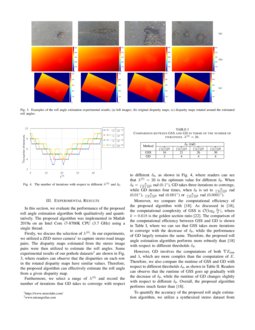 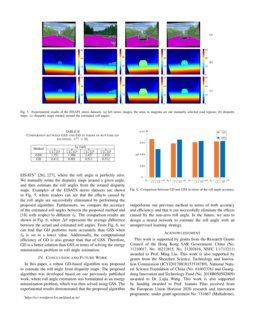 Stereo vision is one of the most commonly used technologies for 3D information extrapolation [1, 2, 3]. This technology extrapolates the depth of the real-world scenery by comparing the difference between a pair of stereo images [4, 5]. The relative positional difference between each pair of correspondence points is generally known as disparity [2, 6]. The disparity information enables autonomous systems to segment road regions more effectively [7]. For example, Labayrade et al. [8] introduced an accurate obstacle detection method based on the analysis of a so-called “v-disparity” image, which was created by computing the histogram of each horizontal row of the disparity map. Since then, many algorithms based on v-disparity image analysis have been proposed for road region segmentation [9, 10, 11]. These algorithms generally hypothesize that the road surface is planar and the stereo rig baseline is perfectly parallel to the horizontal road surface [12, 13]. These assumptions make it feasible to represent the road disparity projections using a linear model [14, 15, 16]. The road regions can, therefore, be extracted by comparing the difference between the actual disparity values and the estimated linear road disparity projection model [17].

However, in practice, the stereo rig baseline is not always perfectly parallel to the horizontal road surface. This fact can introduce a non-zero roll angle θ, shown in Fig. 1, into the imaging process, where Tc and h represent the baseline and the mounting height of the stereo rig, respectively; oCl and oCr are the origins of the left and right camera coordinate systems, respectively. The stereo rig baseline can become perfectly parallel to the horizontal road surface by transforming the original world coordinate system XWOWYW to a new world coordinate system XW′OWYW′. The original disparity map is shown in Fig. 2, where readers can observe that the disparity values change gradually in the horizontal direction. This makes the way of representing the road disparity projections with a linear model problematic [18]. Therefore, the effects caused by the non-zero roll angle have to be eliminated before performing road region segmentation [18].

In recent years, many researchers have proposed to estimate the roll angle from the disparity map. For example, in [19] and [20], the road surface was assumed to be planar, and the disparities in a selected small area were modeled by a plane g(u,v)=c0+c1u+c2v, where u and v are the horizontal and vertical disparity coordinates, respectively. The roll angle was then calculated as arctan(−c1/c2). However, finding a proper small area for plane modeling is always challenging, because such an area may contain an obstacle [18]. This can severely affect the plane modeling precision [21]. In this regard, an iterative roll angle estimation algorithm was proposed in [21], where multiple small areas were selected for plane modeling. The roll angle was then estimated from the optimum selected area. However, the aforementioned algorithms can only work for planar road surfaces. Therefore, in our previous work [18], the projections of road disparities were represented by a parabola, and the roll angle estimation was formulated as an energy minimization problem. To achieve greater processing efficiency, golden section search (GSS) algorithm [22] was utilized to reduce the roll angle search range. However, this method still takes extensive iterations to converge to the minimum. Therefore, the algorithm proposed in this paper solves the energy minimization problem using gradient descent (GD) [23], which greatly reduces the computational complexity of roll angle estimation.

The remainder of this paper is structured as follows: Section II presents the proposed roll angle estimation algorithm. The experimental results for performance evaluation are illustrated in Section III. Finally, Section IV summarizes the paper and provides recommendations for future work.

The parabola representing the road disparity projections can, therefore, be written as follows:

The coefficients of f(u,v,θ) can, therefore, be estimated by solving an energy minimization problem as follows:

The energy minimization problem in (4) has a closed-form solution [24]:

The minimum energy Emin can also be obtained by combining (5) and (7):

According to [18], the desirable roll angle corresponds to the minimum Emin. Therefore, the proposed roll angle estimation algorithm is equivalent to the following energy minimization problem:

However, deriving the numeric solution of (10) is significantly challenging [18]. Therefore, the proposed algorithm utilizes GD to approximate θ by formulating (10) as an iterative optimization problem as follows [25]:

is an identity matrix, and

λ is the learning rate. If λ is too high, (11) may overshoot the minimum. On the other hand, if λ is set to a relatively low value, the convergence of (11) may take too many iterations [22]. Therefore, selecting a proper λ is always essential for GD. Instead of fixing the learning rate with a constant, we utilize backtracking line search to produce an adaptive learning rate:

The initial learning rate λ(0) is set to 26. We will discuss the selection of λ(0) in Section III. The initial approximation θ(0) is set to 0, because in practical experiments the absolute value of the roll angle is usually not that high. The optimization iterates until the absolute difference between θ(k) and θ(k+1) is smaller than a preset threshold δθ. The performance of the proposed roll angle estimation algorithm will be discussed in Section III.

In this section, we evaluate the performance of the proposed roll angle estimation algorithm both qualitatively and quantitatively. The proposed algorithm was implemented in Matlab 2019a on an Intel Core i7-8700K CPU (3.7 GHz) using a single thread.

Firstly, we discuss the selection of λ(0). In our experiments, we utilized a ZED stereo camera111https://www.stereolabs.com/ to capture stereo road image pairs. The disparity maps estimated from the stereo image pairs were then utilized to estimate the roll angles. Some experimental results of our pothole datasets222www.ruirangerfan.com are shown in Fig. 3, where readers can observe that the disparities on each row in the rotated disparity maps have similar values. Therefore, the proposed algorithm can effectively estimate the roll angle from a given disparity map.

Moreover, we compare the computational efficiency of the proposed algorithm with [18]. As discussed in [18], the computational complexity of GSS is O(logkδθπ), where k=0.618 is the golden section ratio[22]. The comparison of the computational efficiency between GSS and GD is shown in Table I, where we can see that GSS takes more iterations to converge with the decrease of δθ, while the performance of GD largely remains the same. Therefore, the proposed roll angle estimation algorithm performs more robustly than [18] with respect to different thresholds δθ.

To quantify the accuracy of the proposed roll angle estimation algorithm, we utilize a synthesized stereo dataset from EISATS333https://ccv.wordpress.fos.auckland.ac.nz/ [26, 27], where the roll angle is perfectly zero. We manually rotate the disparity maps around a given angle, and then estimate the roll angles from the rotated disparity maps. Examples of the EISATS stereo datasets are shown in Fig. 5, where readers can see that the effects caused by the roll angle are successfully eliminated by performing the proposed algorithm. Furthermore, we compare the accuracy of the estimated roll angles between the proposed method and [18] with respect to different δθ. The comparison results are shown in Fig. 6, where Δθ represents the average difference between the actual and estimated roll angles. From Fig. 6, we can find that GD performs more accurately than GSS when δθ is set to a lower value. Additionally, the computational efficiency of GD is also greater than that of GSS. Therefore, GD is a better solution than GSS in terms of solving the energy minimization problem in roll angle estimation.

In this paper, a robust GD-based algorithm was proposed to estimate the roll angle from disparity maps. The proposed algorithm was developed based on our previously published work, where roll angle estimation was formulated as an energy minimization problem, which was then solved using GSS. The experimental results demonstrated that the proposed algorithm outperforms our previous method in terms of both accuracy and efficiency, and that it can successfully eliminate the effects caused by the non-zero roll angle. In the future, we aim to design a neural network to estimate the roll angle with an unsupervised learning strategy.