Aspect Based Sentiment Analysis (ABSA) is the task of identifying sentiment polarity of a text given another text segment or aspect. In ABSA, a text can have multiple sentiments depending upon each aspect. Aspect Term Sentiment Analysis (ATSA) is a subtask of ABSA, in which aspect terms are contained within the given sentence. Most of the existing approaches proposed for ATSA, incorporate aspect information through a different subnetwork thereby overlooking the advantage of aspect terms' presence within the sentence. In this paper, we propose a model that leverages the positional information of the aspect. The proposed model introduces a decay mechanism based on position. This decay function mandates the contribution of input words for ABSA. The contribution of a word declines as farther it is positioned from the aspect terms in the sentence. The performance is measured on two standard datasets from SemEval 2014 Task 4. In comparison with recent architectures, the effectiveness of the proposed model is demonstrated. 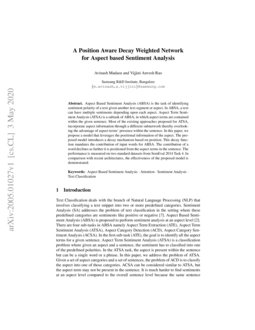 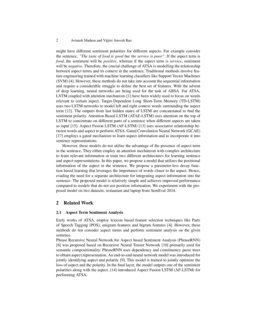 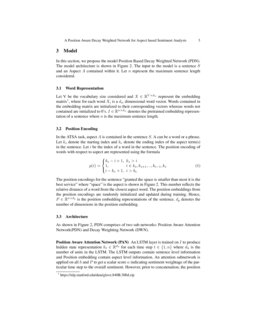 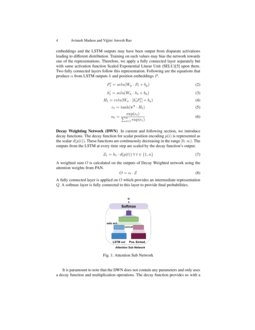 [7]. Aspect Based Sentiment Analysis (ABSA) is proposed to perform sentiment analysis at an aspect level [2]. There are four sub-tasks in ABSA namely Aspect Term Extraction (ATE), Aspect Term Sentiment Analysis (ATSA), Aspect Category Detection (ACD), Aspect Category Sentiment Analysis (ACSA). In the first sub-task (ATE), the goal is to identify all the aspect terms for a given sentence. Aspect Term Sentiment Analysis (ATSA) is a classification problem where given an aspect and a sentence, the sentiment has to classified into one of the predefined polarities. In the ATSA task, the aspect is present within the sentence but can be a single word or a phrase. In this paper, we address the problem of ATSA. Given a set of aspect categories and a set of sentences, the problem of ACD is to classify the aspect into one of those categories. ACSA can be considered similar to ATSA, but the aspect term may not be present in the sentence. It is much harder to find sentiments at an aspect level compared to the overall sentence level because the same sentence might have different sentiment polarities for different aspects. For example consider the sentence, ”The taste of food is good but the service is poor”. If the aspect term is food, the sentiment will be positive, whereas if the aspect term is service, sentiment will be negative

. Therefore, the crucial challenge of ATSA is modelling the relationship between aspect terms and its context in the sentence. Traditional methods involve feature engineering trained with machine learning classifiers like Support Vector Machines (SVM)

. However, these methods do not take into account the sequential information and require a considerable struggle to define the best set of features. With the advent of deep learning, neural networks are being used for the task of ABSA. For ATSA, LSTM coupled with attention mechanism

[12]. The outputs from last hidden states of LSTM are concatenated to find the sentiment polarity. Attention Based LSTM (ATAE-LSTM) uses attention on the top of LSTM to concentrate on different parts of a sentence when different aspects are taken as input [15]. Aspect Fusion LSTM (AF-LSTM) [14]

[17] employs a gated mechanism to learn aspect information and to incorporate it into sentence representations.

However, these models do not utilize the advantage of the presence of aspect term in the sentence. They either employ an attention mechanism with complex architecture to learn relevant information or train two different architectures for learning sentence and aspect representations. In this paper, we propose a model that utilizes the positional information of the aspect in the sentence. We propose a parameter-less decay function based learning that leverages the importance of words closer to the aspect. Hence, evading the need for a separate architecture for integrating aspect information into the sentence. The proposed model is relatively simple and achieves improved performance compared to models that do not use position information. We experiment with the proposed model on two datasets, restaurant and laptop from SemEval 2014.

[4]. However, these methods do not consider aspect terms and perform sentiment analysis on the given sentence. Phrase Recursive Neural Network for Aspect based Sentiment Analysis (PhraseRNN) [6]

was proposed based on Recursive Neural Tensor Network

[10] primarily used for semantic compositionality. PhraseRNN uses dependency and constituency parse trees to obtain aspect representation. An end-to-end neural network model was introduced for jointly identifying aspect and polarity [9]. This model is trained to jointly optimize the loss of aspect and the polarity. In the final layer, the model outputs one of the sentiment polarities along with the aspect. [13] introduced Aspect Fusion LSTM (AF-LSTM) for performing ATSA.

In this section, we propose the model Position Based Decay Weighted Network (PDN). The model architecture is shown in Figure 2. The input to the model is a sentence S and an Aspect A contained within it. Let n represent the maximum sentence length considered.

Let V be the vocabulary size considered and X ∈ RV×dw represent the embedding matrix111https://nlp.stanford.edu/data/glove.840B.300d.zip, where for each word Xi is a dw dimensional word vector. Words contained in the embedding matrix are initialized to their corresponding vectors whereas words not contained are initialized to 0’s. I ∈ Rn×dw denotes the pretrained embedding representation of a sentence where n is the maximum sentence length.

An LSTM layer is trained on I to produce hidden state representation ht ∈ Rdh for each time step t ∈ {1,n} where dh is the number of units in the LSTM. The LSTM outputs contain sentence level information and Position embedding contain aspect level information. An attention subnetwork is applied on all h and P to get a scalar score α

indicating sentiment weightage of the particular time step to the overall sentiment. However, prior to concatenation, the position embeddings and the LSTM outputs may have been output from disparate activations leading to different distribution. Training on such values may bias the network towards one of the representations. Therefore, we apply a fully connected layer separately but with same activation function Scaled Exponential Linear Unit (SELU)

[5] upon them. Two fully connected layers follow this representation. Following are the equations that produce α from LSTM outputs h and position embeddings P.

In current and following section, we introduce decay functions. The decay function for scalar position encoding p(i) is represented as the scalar d(p(i)). These functions are continuously decreasing in the range [0,∞). The outputs from the LSTM at every time step are scaled by the decay function’s output.

A weighted sum O is calculated on the outputs of Decay Weighted network using the attention weights from PAN.

. A softmax layer is fully connected to this layer to provide final probabilities.

It is paramount to note that the DWN does not contain any parameters and only uses a decay function and multiplication operations. The decay function provides us with a facility to automatically weight representations closer to aspect as higher and far away as lower, as long as the function hyperparameter is tuned fittingly. Lesser parameters makes the network efficient and easy to train.

We performed experiments with the following decay functions. Inverse Decay: Inverse decay is represented as:

We performed experiments on two datasets, Restaurant and Laptop from SemEval 2014 Task 4 [8]. Each data point is a triplet of sentence, aspect and sentiment label. The statistics of the datasets are shown in the Table 2. As most existing works reported results on three sentiment labels positive,negative,neutral we performed experiments by removing conflict label as well.

We compare proposed model to the following baselines:

NBOW is the sum of word embeddings in the sentence [14].

Long Short Term Memory (LSTM) is an important baseline in NLP. For this baseline, aspect information is not used and sentiment analysis is performed on the sentence alone. [14].

In TD-LSTM, two separate LSTM layers for modelling the preceding and following contexts of the aspect is done for aspect sentiment analysis [12].

In Attention based LSTM (AT-LSTM), aspect embedding is used as the context for attention layer, applied on the sentence [15].

In this model, aspect embedding is concatenated with input sentence embedding. LSTM is applied on the top of concatenated input [15].

Double Embeddings Convolution Neural Network (DE-CNN) achieved state of the art results on aspect extraction. We compare proposed model with DE-CNN to see how well it performs against DE-CNN. We used aspect embedding instead of domain embedding in the input layer and replaced the final CRF layer with MaxPooling Layer. Results are reported using author’s code333https://github.com/howardhsu/DE-CNN [16].

with a probability 0.5 on this layer. A batch size 20 is considered and the model is trained for 30 epochs. Adam

The Results are presented in Table 1. The Baselines Majority, NBOW and LSTM do not use aspect information for the task at all. Proposed models significantly outperform them.

5.1 The Role of Aspect Position

5.2 The Role of Decay Functions

Furthermore, while avoiding learning separate architectures for weightages, decay functions act as good approximates. These functions rely on constants alone and lack any parameters thereby expressing their efficiency. The reason these functions work is because they consider an assumption intrinsic to the nature of most natural languages. It is that description words or aspect modifier words come close to the aspect or the entity they describe. For example in Figure 2, we see the sentence from the Restaurant dataset, “granted the space is smaller than most, it is the best service you can…”.The proposed model is able to handle this example which has distinct sentiments for the aspects “space” and “service” due to their proximity from “smaller” and “best” respectively.

In this paper, we propose a novel model for Aspect Based Sentiment Analysis relying on relative positions on words with respect to aspect terms. This relative position information is realized in the proposed model through parameter-less decay functions. These decay functions weight words according to their distance from aspect terms by only relying on constants proving their effectiveness. Furthermore, our results and comparisons with other recent architectures, which do not use positional information of aspect terms demonstrate the strength of the decay idea in proposed model.