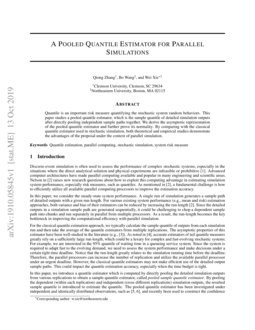 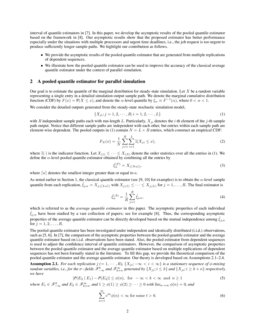 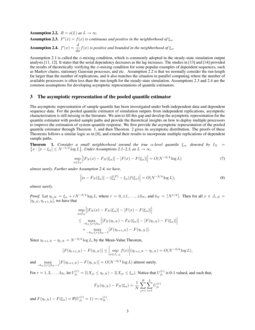 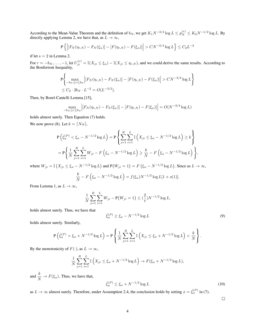 Discrete-event simulation is often used to assess the performance of complex stochastic systems, especially in the situations where the direct analytical solution and physical experiments are infeasible or prohibitive [banks2010discrete]. Advanced computer architectures have made parallel computing available and popular in many engineering and scientific areas. Nelson in [Nelson_2016] raises new research questions about how to exploit this computing advantage in estimating simulation system performance, especially risk measures, such as quantiles. As mentioned in [Nelson_2016], a fundamental challenge is how to efficiently utilize all available parallel computing processors to improve the estimation accuracy.

In this paper, we consider the steady-state system performance. A single run of simulation generates a sample path of detailed outputs with a given run-length. For various existing system performance (e.g., mean and risk) estimation approaches, both variance and bias of their estimators can be reduced by increasing the run-length

[Nelson_2016]. Since the detailed outputs in a simulation sample path are generated sequentially, it could be challenging to chop a dependent sample path into chunks and run separately in parallel from multiple processors. As a result, the run-length becomes the key bottleneck in improving the computational efficiency with parallel simulation.

For the classical quantile estimation approach, we typically calculate the sample quantile of outputs from each simulation run and then take the average of the quantile estimators from multiple replications. The asymptotic properties of this estimator have been well-studied in the literature (e.g., [sun2010asymptotic]). As noted in [heidelberger1984quantile], accurate estimators of tail quantile measures greatly rely on a sufficiently large run-length, which could be a luxury for complex and fast-evolving stochastic systems. For example, we are interested in the 95% quantile of waiting time in a queueing service system. Since the system is required to adapt fast to the evolving demand, we need to assess the system performance and make decisions under a certain tight time deadline. Notice that the run-length greatly relates to the simulation running time before the deadline. Therefore, the parallel processors can increase the number of replication and utilize the available parallel processor under an urgent deadline. However, the classical quantile estimators may not make efficient use of the detailed output sample paths. This could impact the quantile estimation accuracy, especially when the time budget is tight.

, and recently been used to construct the confidence interval of quantile estimators in

[alexopoulos2019sequest]. In this paper, we develop the asymptotic results of the pooled quantile estimator based on the framework in [sen1972bahadur]. Our asymptotic results show that the proposed estimator has better performance especially under the situations with multiple processors and urgent time deadlines, i.e., the job request is too urgent to produce sufficiently longer sample paths. We highlight our contribution as follows.

Our goal is to estimate the quantile of the marginal distribution for steady-state simulation. Let X

be a random variable representing a single entry in a detailed simulation output sample path. We denote the marginal cumulative distribution function (CDF) by

We consider the detailed outputs generated from the steady-state stochastic simulation model,

where I(⋅) is the indicator function. Let X(1)≤⋯≤X(N) denote the order statistics over all the entries in (1). We define the α-level pooled quantile estimator obtained by combining all the entries by

where ⌈a⌉ denotes the smallest integer greater than or equal to a.

As noted earlier in Section 1, the classical quantile estimator (see [chen2006quantile, bekki2009indirect] for examples) is to obtain the α-level sample quantile from each replication, ^ξj,α=Xj,(⌈Lα⌉) with Xj,(1)≤⋯≤Xj,(L) for j=1,…,R. The final estimator is

which is referred to as the average quantile estimator in this paper. The asymptotic properties of each individual ^ξj,α have been studied by a vast collection of papers; see for example [sen1972bahadur]. Thus, the corresponding asymptotic properties of the average quantile estimator can be directly developed based on the mutual independence among ^ξj,α for j=1,2,…,R.

F′(x)=f(x) is continuous and positive in the neighborhood of ξα.

f′(x)=ddxf(x) is positive and bounded in the neighborhood of ξα.

Assumption 2.1 is called the ϕ-mixing condition, which is commonly adopted in the steady-state simulation output analysis [chen2000batching, steiger2001convergence]. It states that the serial dependency decreases as the lag increases. The studies in [bradley2005basic] and [bradley1986basic] provided the results of theoretically verifying the ϕ

-mixing condition for some popular examples of dependent sequences, such as Markov chains, stationary Gaussian processes, and etc. Assumption

2.2 is that we normally consider the run-length far larger than the number of replications, and it also matches the situation in parallel computing where the number of available processors is often less than the run-length for the steady-state simulation. Assumptions 2.3 and 2.4 are the common assumptions for developing asymptotic representations of quantile estimators.

3 The asymptotic representation of the pooled quantile estimator

Consider a small neighborhood around the true α-level quantile ξα, denoted by IN={x:∣∣x−ξα∣∣≤N−1/2logL}. Under Assumptions 2.1–2.3, as L→∞,

almost surely. Further under Assumption 2.4, we have,

According to the Mean-Value Theorem and the definition of bN, we get K1N−3/4logL≤p(r)N≤K2N−1/2logL. By directly applying Lemma 2, we have that, as L→∞,

For r=−bN,…,−1, let U(r)ji=I(Xji≤ξα)−I(Xji≤ηr,N), and we could derive the same results. According to the Bonferroni Inequality,

holds almost surely. Thus, we have that

Notice that Equation (8) can be rewritten as,

which gives the Bahadur representation of sample quantile of the pooled sample paths. Now we consider the asymptotic distribution of the estimator ^ξ(P)α. Let Fj(x)=1L∑Li=1I(Xji≤x) for j=1,…,R, and FN(x)=1R∑Rj=1Fj(x). Following the general definition in literature (e.g., [sen1972bahadur]), we denote

where vh=E[I(Xj,1≤ξα)I(Xj,1+h≤ξα)]−α2, which is the same for all replications with j=1,2,…,R. Under the setting of pooled sample paths in this paper, we obtain that

According to Theorem 1, we have

. By the central limit theorem for

On the other hand, for the classical sample quantile ^ξ(A)α given by (4), we can directly apply the results from [sen1972bahadur] to obtain

Example 1: AR(1) We consider an AR(1) process. For one replication of the dependent sequence, the outputs are given by

is a white noise process with zero mean and variance

σ2. We fix the mean μ=0 and variance σ2=1. The correlation parameter ϕ is varying from 0.3, 0.5, to 0.9. We estimate the quantiles ξα of the outputs with α=50%, 95%, and compare the performance of the pooled estimator in (3) with the classical average quantile estimator in (4). The results of MSEs under urgent deadline and non-urgent deadline are given in Figures 1 and 2, respectively.

Example 2: M/M/1 Queue We consider the steady-state M/M/1 Queueing system. We fix the arrival rate to be 1, and vary the utilization (traffic intensity) to be 0.7 or 0.9. We estimate the quantiles ξα of time staying in the system with α=50%, 95%, and compare the performance of the pooled estimator in (3) with the classical average quantile estimator in (4). The results of MSEs under urgent deadline and non-urgent deadline are given in Figures 3 and 4, respectively.

Appendix A Some Useful Lemmas

We first consider that {Yji:j=1,2,…,R;i=1,2,…,L} are series of 0-1 valued random variables which satisfies the same mixing condition as {Xji} given through (5) and (6), and sharing the same marginal distribution P(Yji=1)=1−P(Yji=0)=α. Assume that Sj=∑Li=1Yji and SN=∑Rj=1Sj, then we can have the following lemma by extending the results in Section 4 of [sen1972bahadur].

By Markov inequality, we would have,

. Then from the independence between replications and inequality between arithmetic and geometric means, we have,

and E[exp(hnLYj1)]=1+α[exp(hnL)−1]. Applying those recursively yields:

We now consider sequence of 0-1 valued random variables Uji s.t. Uji=U(Xji) and P(Uji=1)=1−P(Uji=0)=αN for all j and i. We can define Sj, SN similar as before by replacing Yji with Uji.

For simplicity, let C=1, and then ∀ε>0, follow the similar procedure in the proof of Lemma 1,