A Note on Topology Preservation in Classification, and the Construction of a Universal Neuron Grid

It will be shown that according to theorems of K. Menger, every neuron grid if identified with a curve is able to preserve the adopted qualitative structure of a data space. Furthermore, if this identification is made, the neuron grid structure can always be mapped to a subset of a universal neuron grid which is constructable in three space dimensions. Conclusions will be drawn for established neuron grid types as well as neural fields. 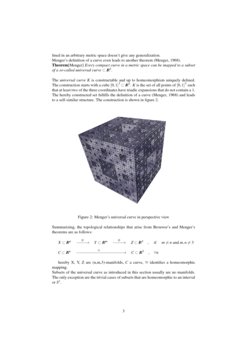 Topology is one of the basic branches of mathematics. It is sometimes also referred to as qualitative geometry, in a way that it deals with the qualitative properties and structure of geometrical objects. The geometrical objects of interest in this paper are vector spaces, manifolds, and curves. These form the basis of the presented mathematical treatment of classification with neuron grids. Consequently, the paper has to begin with some mathematical preliminaries.

In the following, a n-dimensional vector space will be identified with a subspace of IRn. It is assumed that IRn is equipped with a topology which in turn is induced by a metric. Mappings between subspaces of IRn are called homeomorphic or topology preserving if they are one-to-one and continuous in both directions. It is known from the theorem of dimension invariance (Brouwer, 1911) that mappings between non-empty open sets U⊂IRm and V⊂IRn for m≠n are never homeomorphic. In the light of Brouwer’s theorem it is the open sets that fix the topological dimension of a subset of IRn. As the IRn is introduced as a metric space, the open sets are given by open balls that formalize the concept of distance between points of this metric space. Homeomorphic mappings preserve the neighborhood relationship between points of IRn. Amongst the huge variety of subsets of the metric space IRn, the n-dimensional manifolds (or n-manifolds) have turned out to be of interest as these describe solution spaces of equations or geometrical entities. Manifolds are parameterized geometrical objects, parameters could describe e.g. the coordinates of a physical space. As n-manifolds are locally Euclidean of dimension n they are subject to Brouwer’s theorem and therefore of fixed topological dimension. As a consequence, dimension reducing mappings between manifolds will not be able to transfer mutual topological structures. A vivid example of the dimension conflict of two manifolds of different dimension is given by a surjective and continuous mapping of [0,1] onto [0,1]×[0,1] which is also called a ’Peano curve’ (Peano, 1890). The convoluted structure of a Peano curve does not reflect the neighborhood relationship of elements of the underlying manifold ⊂IR2, not even locally: There is no topology preserving mapping of [0,1] onto [0,1]×[0,1]. An illustration of a Peano curve to 4th iteration is given in figure 1.

The proof of this theorem is left here. The interested reader is referred to Menger’s textbook (Menger, 1968). The theorem states that with regard to topological aspects, the transition from curves defined in three-dimensional Euclidean space to curves defined in an arbitrary metric space doesn’t give any generalization. Menger’s definition of a curve even leads to another theorem (Menger, 1968). Theorem[Menger] Every compact curve in a metric space can be mapped to a subset of a so-called universal curve ⊂IR3.

The universal curve K is constructable and up to homeomorphism uniquely defined. The construction starts with a cube [0,1]3⊂IR3. K is the set of all points of [0,1]3 such that at least two of the three coordinates have triadic expansions that do not contain a 1. The hereby constructed set fulfills the definition of a curve (Menger, 1968) and leads to a self-similar structure. The construction is shown in figure 2.

Summarizing, the topological relationships that arise from Brouwer’s and Menger’s theorems are as follows:

hereby X, Y, Z are (n,m,3)-manifolds, C a curve, ≅ identifies a homeomorphic mapping. Subsets of the universal curve as introduced in this section usually are no manifolds. The only exception are the trivial cases of subsets that are homeomorphic to an interval or S1.

by approximating the probability density function

p(v) of elements v of V. Hereby, the elements of V are mapped iteratively to a set of weight vectors U such that respective a suitable metric the quantization error functional gets minimal. An extension of the VQ method introduces a topology on the set of weight vectors such that U constitutes a topological space which is then called a neuron grid. By means of the topology of the neuron grid, elements of U

are mutually adjacent if they are adjacent on the neuron grid. Using algorithms of machine learning, for example Kohonen’s feature maps

2.2 Identification of a Neuron Grid with a Curve

Assuming Menger’s curve definition, the following identification is made:

Definition A neuron grid is a curve

It is required that neurons of a neuron grid constitute a discrete point set of a curve. Subsets of a neuron grid which contain no neurons are called links between neurons. Consequently, the topology of the defined neuron grid corresponds to a curve topology. The identification of a neuron grid with a curve as motivated in this section is coherent and straightforward for neuron grids whose topologies are identifiable with a subset of Menger’s universal curve. This is the case for neuron grids of the Kohonen type (Kohonen, 1990) as well as some variants thereof e.g. (Fritzke, 1992; Oja et al., 1999) that constitute topological spaces of a discrete point set together with a set of links between the point set. The presented identification with a curve produces the following results:

These results were inferred directly from Menger’s curve theorems. It should be mentioned though that Brouwer’s theorem precludes a direct topology preserving mapping between the vector space topology V which is induced by the metric of IRn and U⊂IRm if m≠n: The topology of a neuron grid that is identifiable with a subset of the universal curve is weaker than the topology of IRn, metrical properties of IRn generally won’t be reproduced on the classification result. It should also be mentioned that similar results are not possible for a neuron grid if it is defined by a two- or higher-dimensional manifold. The well-known ’Klein bottle’ (Klein, 1923) provides a vivid example what might happen to a two-dimensional surface that is defined in IRn,n>3, and shows an apparent self-intersection if mapped to IR3. This mapping is not homeomorphic, although from Brouwer’s theorem homeomorphic mappings of a two-dimensional surface from IRn,n>3 to IR3 would be allowed.

The presented theorems of Brouwer and Menger illustrate an alternative though simple and straightforward approach to the topological foundation of neuron grids. The identification of a neuron grid with a subset of the universal curve at a first or second glance may be seen as trivial. This is in particular due to the presented definition of a curve which is intuitive and comprehensible, also from a naive standpoint. The presented topological framework of neuron grids restricts neuron sets to discrete point sets. Alternative approaches (Amari, 1977; Bressloff, 2005; Cottet, 1995) introduce continuous models of neural fields. As neural fields per definition provide open sets in their domain, the present paper also incloses the caveat that neural fields might produce unusable results if applied to classification tasks.

I would like to thank Catalin Dartu for the nice visualization of Menger’s universal curve.