In a recent work, we introduced a rigorous framework to describe the mean field limit of the gradient-based learning dynamics of multilayer neural networks, based on the idea of a neuronal embedding. There we also proved a global convergence guarantee for three-layer (as well as two-layer) networks using this framework. In this companion note, we point out that the insights in our previous work can be readily extended to prove a global convergence guarantee for multilayer networks of any depths. Unlike our previous three-layer global convergence guarantee that assumes i.i.d. initializations, our present result applies to a type of correlated initialization. This initialization allows to, at any finite training time, propagate a certain universal approximation property through the depth of the neural network. To achieve this effect, we introduce a bidirectional diversity condition. 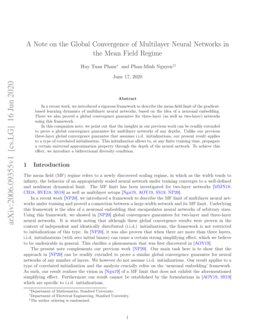 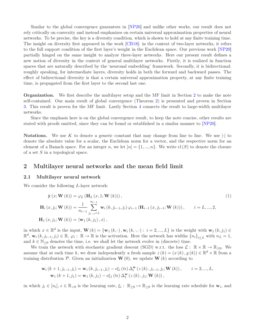 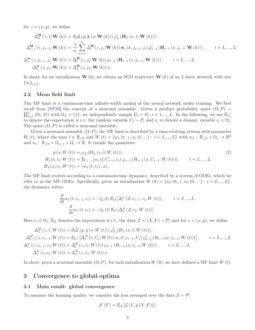 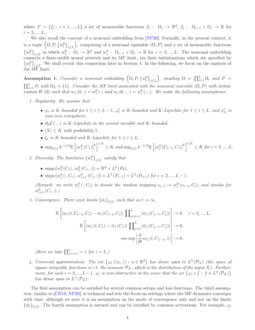 The mean field (MF) regime refers to a newly discovered scaling regime, in which as the width tends to infinity, the behavior of an appropriately scaled neural network under training converges to a well-defined and nonlinear dynamical limit. The MF limit has been investigated for two-layer networks [MMN18, CB18, RVE18, SS18] as well as multilayer setups [Ngu19, AOY19, SS19, NP20].

In a recent work [NP20], we introduced a framework to describe the MF limit of multilayer neural networks under training and proved a connection between a large-width network and its MF limit. Underlying this framework is the idea of a neuronal embedding that encapsulates neural networks of arbitrary sizes. Using this framework, we showed in [NP20] global convergence guarantees for two-layer and three-layer neural networks. It is worth noting that although these global convergence results were proven in the context of independent and identically distributed (i.i.d.) initializations, the framework is not restricted to initializations of this type. In [NP20], it was also proven that when there are more than three layers, i.i.d. initializations (with zero initial biases) can cause a certain strong simplifying effect, which we believe to be undesirable in general. This clarifies a phenomenon that was first discovered in [AOY19].

The present note complements our previous work [NP20]. Our main task here is to show that the approach in [NP20] can be readily extended to prove a similar global convergence guarantee for neural networks of any number of layers. We however do not assume i.i.d. initializations. Our result applies to a type of correlated initialization and the analysis crucially relies on the ‘neuronal embedding’ framework. As such, our result realizes the vision in [Ngu19] of a MF limit that does not exhibit the aforementioned simplifying effect. Furthermore our result cannot be established by the formulations in [AOY19, SS19] which are specific to i.i.d. initializations.

Similar to the global convergence guarantees in [NP20] and unlike other works, our result does not rely critically on convexity and instead emphasizes on certain universal approximation properties of neural networks. To be precise, the key is a diversity condition, which is shown to hold at any finite training time. The insight on diversity first appeared in the work [CB18]: in the context of two-layer networks, it refers to the full support condition of the first layer’s weight in the Euclidean space. Our previous work [NP20] partially hinged on the same insight to analyze three-layer networks. Here our present result defines a new notion of diversity in the context of general multilayer networks. Firstly, it is realized in function spaces that are naturally described by the ‘neuronal embedding’ framework. Secondly, it is bidirectional: roughly speaking, for intermediate layers, diversity holds in both the forward and backward passes. The effect of bidirectional diversity is that a certain universal approximation property, at any finite training time, is propagated from the first layer to the second last one.

We first describe the multilayer setup and the MF limit in Section 2 to make the note self-contained. Our main result of global convergence (Theorem 2) is presented and proven in Section 3. This result is proven for the MF limit. Lastly Section 4 connects the result to large-width multilayer networks.

Since the emphasis here is on the global convergence result, to keep the note concise, other results are stated with proofs omitted, since they can be found or established in a similar manner to [NP20].

We use K to denote a generic constant that may change from line to line. We use |⋅|

to denote the absolute value for a scalar, the Euclidean norm for a vector, and the respective norm for an element of a Banach space. For an integer

We consider the following L-layer network:

We train the network with stochastic gradient descent (SGD) w.r.t. the loss

L:R×R→R≥0. We assume that at each time k, we draw independently a fresh sample z(k)=(x(k),y(k))∈Rd×R from a training distribution P. Given an initialization W(0), we update W(k) according to

In short, for an initialization W(0), we obtain an SGD trajectory W(k) of an L-layer network with size {ni}i≤L.

The MF limit is a continuous-time infinite-width analog of the neural network under training. We first recall from [NP20]

the concept of a neuronal ensemble. Given a product probability space

to denote the expectation w.r.t. the random variable

to denote a dummy variable

The MF limit evolves according to a continuous-time dynamics, described by a system of ODEs, which we refer to as the MF ODEs. Specifically, given an initialization W(0)={w1(0,⋅),wi(0,⋅,⋅):i=2,...,L}, the dynamics solves:

In short, given a neuronal ensemble (Ω,P), for each initialization W(0), we have defined a MF limit W(t).

To measure the learning quality, we consider the loss averaged over the data Z∼P:

We also recall the concept of a neuronal embedding from [NP20]. Formally, in the present context, it is a tuple (Ω,P,{w0i}i≤L), comprising of a neuronal ensemble (Ω,P) and a set of measurable functions {w0i}i≤L in which w01:Ω1→Rd and w0i:Ωi−1×Ωi→R for i=2,...,L. The neuronal embedding connects a finite-width neural network and its MF limit, via their initializations which are specified by {w0i}i≤L. We shall revisit this connection later in Section 4. In the following, we focus on the analysis of the MF limit.

The first assumption can be satisfied for several common setups and loss functions. The third assumption, similar to

[CB18, NP20], is technical and sets the focus on settings where the MF dynamics converges with time, although we note it is an assumption on the mode of convergence only and not on the limits {¯wi}i≤L. The fourth assumption is natural and can be satisfied by common activations. For example, φi can be tanh for i=1,...,L−1. In general, for a bounded and continuous φi to be non-obstructive, it suffices that φi is not a constant function. The second assumption is new: it refers to an initialization scheme that introduces correlation among the weights. In particular, i.i.d. initializations do not satisfy this assumption for L≥3.

This theorem can be proven in a similar manner to [NP20, Theorem 3], so we will not show the complete proof here. The main focus is on the global convergence result, which we state next.

The proof proceeds with several insights that have already appeared in [NP20]. The novelty of our present analysis lies in the use of the aforementioned bidirectional diversity. To clarify the point, let us give a brief high-level idea of the proof. At time t sufficiently large, we expect to have:

for PX-almost every x. The desired conclusion then follows.

Hence the crux of the proof is to show that supp(HL−1(⋅,CL−1;W(t)))=L2(PX). In fact, we show that this holds for any finite time t≥0. This follows if we can prove the forward diversity property of the weights, in which wi(t,⋅,Ci) has full support in L2(Pi−1) for any t≥0 and 2≤i≤L−1, and a similar property for w1(t,C1). Interestingly to that end, we actually show that bidirectional diversity, and hence both forward diversity and backward diversity, hold at any time t≥0, even though we only need forward diversity for our purpose.

We divide the proof into several steps.

Step 1: Diversity of the weights.

We show that supp(w1(t,C1))=Rd and supp(wi(t,⋅,Ci))=L2(Pi−1) for i=2,...,L−1, for any t≥0. We do so by showing a stronger statement, that the following bidirectional diversity condition holds at any finite training time:

We consider the following auxiliary dynamics on Rd×L2(P2):

In particular, the solution (~a−1,~a−2) of the ODE (3) with this initialization satisfies

Step 2: Diversity of the pre-activations.

Firstly consider the base case i=2. Recall that