A note on estimation in a simple probit model under dependency 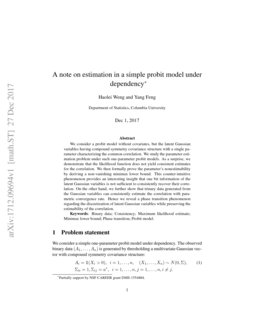 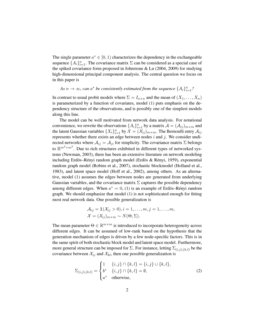 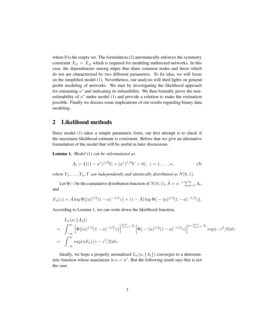 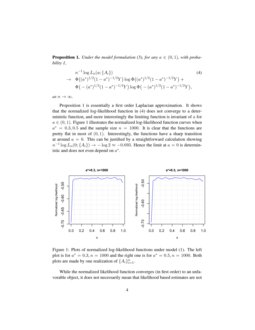 is generated by thresholding a multivariate Gaussian vector with compound symmetry covariance structure:

The single parameter a∗∈[0,1) characterizes the dependency in the exchangeable sequence {Ai}ni=1. The covariance matrix Σ can be considered as a special case of the spiked covariance form proposed in Johnstone & Lu (2004, 2009)

for studying high-dimensional principal component analysis. The central question we focus on in this paper is

As n→∞, can a∗ be consistently estimated from the sequence {Ai}ni=1?

In contrast to usual probit models where Σ=In×n and the mean of (X1,…,Xn) is parameterized by a function of covariates, model (1) puts emphasis on the dependency structure of the observations, and is possibly one of the simplest models along this line.

The model can be well motivated from network data analysis. For notational convenience, we rewrite the observations {Ai}ni=1 by a matrix A=(Aij)m×m and the latent Gaussian variables {Xi}ni=1 by X=(Xij)m×m. The Bernoulli entry Aij represents whether there exists an edge between nodes i and j. We consider undirected networks where Aij=Aji for simplicity. The covariance matrix Σ belongs to Rm2×m2. Due to rich structures exhibited in different types of networked systems (Newman, 2003), there has been an extensive literature on network modeling including Erdös–Rényi random graph model (Erdös & Rényi, 1959), exponential random graph model (Robins et al., 2007), stochastic blockmodel (Holland et al., 1983), and latent space model (Hoff et al., 2002), among others. As an alternative, model (1) assumes the edges between nodes are generated from underlying Gaussian variables, and the covariance matrix Σ captures the possible dependency among different edges. When a∗=0, (1) is an example of Erdös–Rényi random graph. We should emphasize that model (1) is not sophisticated enough for fitting most real network data. One possible generalization is

The mean parameter Θ∈Rm×m is introduced to incorporate heterogeneity across different edges. It can be assumed of low-rank based on the hypothesis that the generation mechanism of edges is driven by a few node-specific factors. This is in the same spirit of both stochastic block model and latent space model. Furthermore, more general structure can be imposed for Σ. For instance, letting Σ(i,j),(k,l) be the covariance between Xij and Xkl, then one possible generalization is

where ∅ is the empty set. The formulation (2) automatically enforces the symmetry constraint Xij=Xji which is required for modeling undirected networks. In this case, the dependencies among edges that share common nodes and those which do not are characterized by two different parameters. To fix idea, we will focus on the simplified model (1). Nevertheless, our analysis will shed lights on general probit modeling of networks. We start by investigating the likelihood approach for estimating a∗ and indicating its infeasibility. We then formally prove the nonestimability of a∗ under model (1) and provide a solution to make the estimation possible. Finally we discuss some implications of our results regarding binary data modeling.

Since model (1) takes a simple parametric form, our first attempt is to check if the maximum likelihood estimate is consistent. Before that we give an alternative formulation of the model that will be useful in later discussions.

Model (1) can be reformulated as

where Y1,…,Yn,Y are independently and identically distributed as N(0,1).

According to Lemma 1, we can write down the likelihood function,

Ideally, we hope a properly normalized Ln(a;{Ai}) converges to a deterministic function whose maximizer is a=a∗. But the following result says this is not the case.

Proposition 1 is essentially a first order Laplacian approximation. It shows that the normalized log-likelihood function in (1) does not converge to a deterministic function, and more interestingly the limiting function is invariant of a for a∈(0,1). Figure 1 illustrates the normalized log-likelihood function curves when a∗=0.3,0.5 and the sample size n=1000. It is clear that the functions are pretty flat in most of (0,1). Interestingly, the functions have a sharp transition at around a=0. This can be justified by a straightforward calculation showing n−1logLn(0;{Ai})→−log2≈−0.693. Hence the limit at a=0 is deterministic and does not even depend on a∗.

While the normalized likelihood function converges (in first order) to an unfavorable object, it does not necessarily mean that likelihood based estimates are not consistent, because the higher order terms in the limiting function may contain useful information for the parameter of interest. Unfortunately, this is not true either, as demonstrated below by a second order analysis of the likelihood function.

is the probability density function of

Proposition 2 can be considered as a second order Laplacian approximation result. Proposition 1 shows that the first order term of Ln(a;{Ai}) is exponentially small. According to Proposition 2, after Ln(a;{Ai}) is scaled by a fully data-dependent and exponentially small term exp(−n(¯Alog¯A+(1−¯A)log(1−¯A))), the dominating term is of order n−1/2. Moreover, the number a comes into play in the precise constant of the second order term of Ln(a;{Ai}), and the constant attains maximum at amax=a∗Y2(a∗Y2+1−a∗)−1. If we replace Y2 with its expectation, then amax would equal a∗. However, since the second order term is a random function of a, we may not expect maximum likelihood estimate to be consistent for a∗∈(0,1).

The preceding discussions in Section 2 indicate that the likelihood approach may not yield consistent estimates for a∗. Since model (1

) is a simple parametric model, it may further imply no consistent estimates exist. Indeed, this is formally proved in the theorem below.

where T is any measurable function and the expectation Ea∗ is taken over {Ai}ni=1.

Theorem 1 reveals that no consistent estimates of a∗ exist even when the parameter space only consists of two elements. At first glance, this result seems counter-intuitive. The model (1) has a simple structure with a single parameter, but there is no way to reliably estimate the parameter from infinite components of the data sequence. On the other hand, if the observation is the hidden sequence (X1,…,Xn) instead of (A1,…,An), n1/2-consistent estimates can be easily constructed. For instance, denote Zi=X2i−1−X2i,i=1,…,n/2. Lemma 1 implies that Z1,…,Zn/2 are independently and identically distributed as N(0,2(1−a∗)). Hence 1−n−1∑n/2i=1Z2i is n1/2-consistent for a∗.

One might argue that it is the strong dependency in {Ai}ni=1 causing the issue. If the dependency can be somehow weakened, will a∗ become estimable? For example, we can consider a∗=ρna∗0 with a∗0 a constant and ρn→0, and ask if there is any estimate ^an such that ^an−a∗=o(ρn). With a similar proof as the one for Theorem 1, it is possible to show

The arguments in the last two paragraphs suggest that the nonestimability of a∗ in model (1) is due to the thresholding operation in the binary data generating process. Specifically, a∗ is estimable from (X1,…,Xn), but the thresholding on Xi to produce Ai results in loss of too much information, to be able to consistently estimate a∗. In a nutshell, one bit information of each Xi is not sufficient to recover the common correlation among them.

That is, for every i=1,…,n, instead of observing the sign of Xi, we know which one of the three intervals {Ij}3j=1 Xi belongs to. When t1=t2=0, it reduces to the model (1). The theorem below gives one n1/2-consistent estimate.

For all t1<t2, consider the estimate

Figure 2 empirically verifies the consistency result of ^αn in Theorem 2.

Following the preceding discussion, we can further consider a general setting where there exist S (S≥3) consecutive intervals {Ij}Sj=1 and Ai represents which interval Xi falls into. It is not hard to show that n1/2-consistent estimate for a∗ can be constructed in a similar way as in (5). At a high level, we may consider the observed sequence {Ai}ni=1 as a discretized version of {Xi}ni=1. Theorems 1 and 2 together characterize a phase transition regarding the estimability of a∗. That is, a∗ is estimable if and only if S≥3.

We have revealed an interesting phenomenon regarding the estimability of a single parameter in a simple probit model. Several important directions are left open. For instance, suppose the latent vector (X1,…,Xn) is modeled by the Gaussian copula family (Klaassen et al., 1997; Tsukahara, 2005) with the parameter Σ having compound symmetry covariance structure as in (1). What can we say about the estimability of a∗? As another example, consider the covariance matrix Σ in (1) is replaced by the more general one in (2) in network modeling. It is clear that both a∗ and b∗ are nonestimable from the one bit information of (X1,…,Xn). The question is how much more information is needed to consistently estimate them. Would the phase transition phenomenon we discussed in Remark 3 continue to hold?

Our results also have a few insightful implications. For example, modeling a dependent exchangeable binary sequence is subtle. We have shown that it is even impossible to do inference under a simple one-parameter model. Regarding binary network modeling, it might not be desirable to assume dependency among all the edges. Furthermore, converting a weighted network to a binary one may lose substantial information for the sake of parameter estimation.

The authors are grateful to Professor Anthony C. Davison and Professor Zhiliang Ying for their insightful comments which greatly improved the scope and presentation of this paper.

Recall that Φ(⋅),ψ(⋅) are the cumulative distribution function and probability density function of a standard normal respectively, and Φ−1(⋅) is the inverse function of Φ(⋅). We will use the following notations extensively,

We also use f(n)∝g(n) to mean f(n) and g(n) are of the same order. The next section collects a few useful lemmas that will be applied in the later proofs.

The proof is a direct adaption from the calculations of the integral (2.1) in Wong (2001). We hence do not repeat the arguments. ∎

From Lemma 2 part (v), it is straightforward to confirm that

We thus focus on bounding E[−log¯A1(0<¯A<1)]. For notational simplicity, we denote

It is straightforward to verify that z∗=argmaxzFn(z) when 0<¯A<1. Hence we can readily have the upper bound, if 0<¯A<1

Regarding the lower bound, if 0<¯A<1 there exists an absolute constant C1>0 such that

These results combined with the upper and lower bounds in (6) and (C) completes the proof. ∎

We first restrict our analysis to the case 0<¯A<1. We have

We focus on the first integral above. Lemma 2 part (i) says that Fn(z) is strictly concave. Hence Fn(z) is increasing in (−∞,z∗). By a change of variable Fn(z∗)−Fn(z)=~z we obtain

Based on the Taylor expansions

Next we bound the second term on the right-hand side of (8). With a few calculations we get

According to Lemma 2 part (ii) and (iv), there exist absolute constants C1,C2>0 such that for any z∈R

where C3 is a positive constant only depending on a. To bound the other term in (10), we need take the Taylor expansions to a higher order,