Most normality tests in the literature are performed for scalar and independent samples. Thus, they become unreliable when applied to colored processes, hampering their use in realistic scenarios. We focus on Mardia's multivariate kurtosis, derive closed-form expressions of its asymptotic distribution for statistically dependent samples, under the null hypothesis of normality. Included experiments illustrate, by means of copulas, that it does not suffice to test a one-dimensional marginal to conclude normality. The proposed test also exhibits good properties on other typical scenarios, such as the detection of a non-Gaussian process in the presence of an additive Gaussian noise. 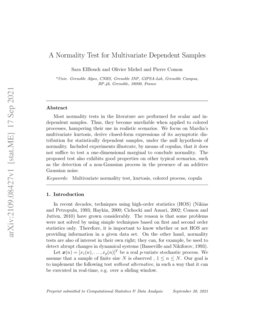 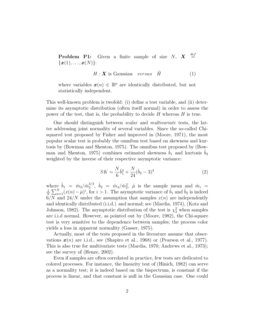 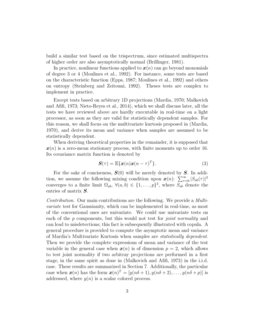 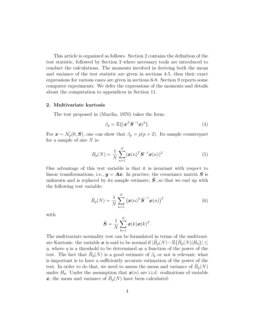 Extensive literature exists on how to test for normality, especially for...
Sara Elbouch, et al. ∙

Testing of fractional Brownian motion in a noisy environment

Gaussian process for vector-valued function model has been shown to be a...
Zexun Chen, et al. ∙

Blind Signal Separation in the Presence of Gaussian Noise

The objective of this article is to statistically characterize and descr...
Ferkan Yilmaz, et al. ∙

We consider the problem of decomposing the information content of three ...
Gabriel Schamberg, et al. ∙

In recent decades, techniques using high-order statistics (HOS) (Nikias and Petropulu, 1993; Haykin, 2000; Cichocki and Amari, 2002; Comon and Jutten, 2010) have grown considerably. The reason is that some problems were not solved by using simple techniques based on first and second order statistics only. Therefore, it is important to know whether or not HOS are providing information in a given data set. On the other hand, normality tests are also of interest in their own right; they can, for example, be used to detect abrupt changes in dynamical systems (Basseville and Nikiforov, 1993).

Let x(n)=[x1(n),…,xp(n)]T be a real p-variate stochastic process. We assume that a sample of finite size N is observed , 1≤n≤N. Our goal is to implement the following test without alternative, in such a way that it can be executed in real-time, e.g. over a sliding window.

where variables x(n)∈Rp are identically distributed, but not statistically independent.

This well-known problem is twofold: (i) define a test variable, and (ii) determine its asymptotic distribution (often itself normal) in order to assess the power of the test, that is, the probability to decide

H whereas H is true.

One should distinguish between scalar and multivariate tests, the latter addressing joint normality of several variables. Since the so-called Chi-squared test proposed by Fisher and improved in (Moore, 1971)

, the most popular scalar test is probably the omnibus test based on skewness and kurtosis by

weighted by the inverse of their respective asymptotic variance:

Even if samples are often correlated in practice, few tests are dedicated to colored processes. For instance, the linearity test of (Hinich, 1982) can serve as a normality test; it is indeed based on the bispectrum, is constant if the process is linear, and that constant is null in the Gaussian case. One could build a similar test based on the trispectrum, since estimated multispectra of higher order are also asymptotically normal (Brillinger, 1981).

In practice, nonlinear functions applied to x(n) can go beyond monomials of degree 3 or 4 (Moulines et al., 1992)

. For instance, some tests are based on the characteristic function

Except tests based on arbitrary 1D projections (Mardia, 1970; Malkovich and Afifi, 1973; Nieto-Reyes et al., 2014), which we shall discuss later, all the tests we have reviewed above are hardly executable in real-time on a light processor, as soon as they are valid for statistically dependent samples. For this reason, we shall focus on the multivariate kurtosis proposed in (Mardia, 1970), and derive its mean and variance when samples are assumed to be statistically dependent.

When deriving theoretical properties in the remainder, it is supposed that x(n)

is a zero-mean stationary process, with finite moments up to order 16. Its covariance matrix function is denoted by

For the sake of conciseness, S(0) will be merely denoted by S. In addition, we assume the following mixing condition upon x(n): ∑∞τ=0|Sab(τ)|2 converges to a finite limit Ωab, ∀(a,b)∈{1,…,p}2, where Sab denote the entries of matrix S.

Our main contributions are the following. We provide a Multivariate test for Gaussianity, which can be implemented in real-time, as most of the conventional ones are univariate. We could use univariate tests on each of the p components, but this would not test for joint normality and can lead to misdetections; this fact is subsequently illustrated with copula. A general procedure is provided to compute the asymptotic mean and variance of Mardia’s Multivariate Kurtosis when samples are statistically dependent. Then we provide the complete expressions of mean and variance of the test variable in the general case when x(n) is of dimension p=2, which allows to test joint normality if two arbitray projections are performed in a first stage, in the same spirit as done in (Malkovich and Afifi, 1973) in the i.i.d. case. These results are summarized in Section 7. Additionally, the particular case when x(n) has the form x(n)T=[y(nδ+1),y(nδ+2),…,y(nδ+p)] is addressed, where y(n) is a scalar colored process.

This article is organized as follows. Section 2

contains the definition of the test statistic, followed by Section

3 where necessary tools are introduced to conduct the calculations. The moments involved in deriving both the mean and variance of the test statistic are given in sections 4-5, then their exact expressions for various cases are given in sections 6-8. Section 9 reports some computer experiments. We defer the expressions of the moments and details about the computation to appendices in Section 11.

One advantage of this test variable is that it is invariant with respect to linear transformations, i.e.,

y=Ax. In practice, the covariance matrix S is unknown and is replaced by its sample estimate, ^S, so that we end up with the following test variable:

The multivariate normality test can be formulated in terms of the multivariate Kurtosis: the variable x is said to be normal if |^Bp(N)−E{^Bp(N)|H0}|≤η, where η is a threshold to be determined as a function of the power of the test. The fact that ^Bp(N) is a good estimate of βp or not is relevant; what is important is to have a sufficiently accurate estimation of the power of the test. In order to do that, we need to assess the mean and variance of ^Bp(N) under H0. Under the assumption that x(n) are i.i.d. realizations of variable x, the mean and variance of ^Bp(N) have been calculated:

Our purpose is now to state a similar theorem when {x(n)} are not independent. Since this involves heavy calculations, we need to introduce some tools to make them possible.

The estimated multivariate kurtosis (6) is a rational function of degree 4. Since we wish to calculate its asymptotic first and second order moments, when N tends to infinity, we may expand this rational function about its mean. The first step is to expand the estimated covariance ^S. Let ^S=S+Δ, where Δ is small compared to S; in fact :

Proof. Under Hypothesis H, the covariance of entries Δab take the form below :

and letting τ=n−m, and Ωabcd=SacSbd+SadSbc we have after some manipulation:

If we denote by G and ^G the inverse of S and ^S, respectively, we have the lemma below.

The inverse ^G of ^S can be approximated by

Then replace Δ by ^S−S. This leads to

Equation (10) is eventually obtained after replacing ^S by 1N∑kx(k)x(k)T and all terms of the form x(q)TGx(r) by Aqr. □

x will arise. Under the normal (null) hypothesis, these moments are expressed as functions of second order moments only. To keep notations reasonably concise, it is proposed to use McCullagh’s bracket notation (Mccullagh, 1987), briefly reminded in Appendix 11.1. Furthermore, for all moments of order higher than p, some components appear multiple times; counting the number of identical terms in the expansion of the higher moments is a tedious task. All the moment expansions that are necessary for the derivations presented in this paper are developed in Appendix 11.3.

In order to keep notations as explicit and concise as possible, while keeping explicit the role of both coordinate (or space) indices and time indices, let the moments of x(t), whose p components are xa(t), 1≤a≤p be noted

and so forth for higher orders. It shall be emphasized that different time and coordinate indices appear here as the components are assumed to be colored (time correlated) and dependent to each others (spatially correlated).

In the above equation, the 2L-order moment μα1…αLβ1…βLr1…rLc1…cL has superscripts indicating the time indices involved, whereas the subscripts indicate the coordinate (or space) indices.

While being general, the above formulation may take simpler, or more explicit forms in practice. The detailed methodology for computing the expressions of the mean and variance of ^Bp as functions of second order moments is deferred to Appendix 11.2. The resulting expressions of Mardia’s statistics are given and discussed in the sections to come.

4 Expression of the mean of Bp(N)

According to Equation (10), we have four types of terms. The goal of this section is to provide the expectation of each of these terms.

With the definition of Aij given in Lemma 3.3, we have:

Using expressions of moments given in Appendix 11.3, the expectations of the four terms defined in Lemma 4.1 take the form below

5 Expression of the variance of Bp(N)

From Lemma 3.3, we can also state what moments of Aij will be required in the expression of the variance of Bp(N).

By raising (10) to the second power and using the definition of Aij given in Lemma 3.3, we can check that the following moments are required:

Then, as in Proposition 4.1, by using the results of Appendix 11.3, the moments μ∗∗ could be in turn expressed as a function of second order moments. For readability, we do not substitute here these values.

The complicated expressions obtained in the previous sections simplify drastically in the scalar case, and we get the results below.

In the bivariate case, expressions become immediately more complicated, but we can still write them explicitly, as reported below. We remind that μijab=Sab(i−j).