A Free Lunch from the Noise: Provable and Practical Exploration for Representation Learning

Representation learning lies at the heart of the empirical success of deep learning for dealing with the curse of dimensionality. However, the power of representation learning has not been fully exploited yet in reinforcement learning (RL), due to i), the trade-off between expressiveness and tractability; and ii), the coupling between exploration and representation learning. In this paper, we first reveal the fact that under some noise assumption in the stochastic control model, we can obtain the linear spectral feature of its corresponding Markov transition operator in closed-form for free. Based on this observation, we propose Spectral Dynamics Embedding (SPEDE), which breaks the trade-off and completes optimistic exploration for representation learning by exploiting the structure of the noise. We provide rigorous theoretical analysis of SPEDE, and demonstrate the practical superior performance over the existing state-of-the-art empirical algorithms on several benchmarks. 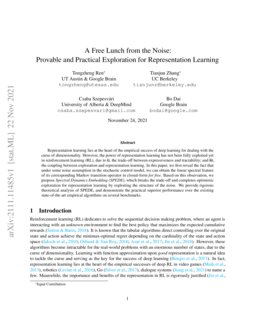 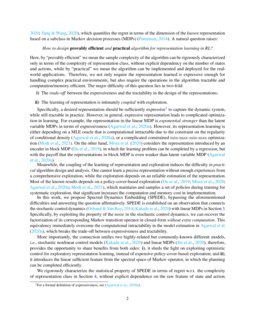 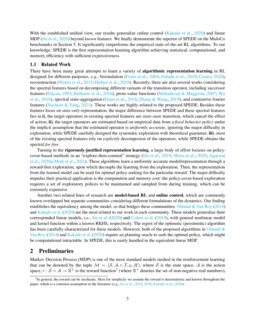 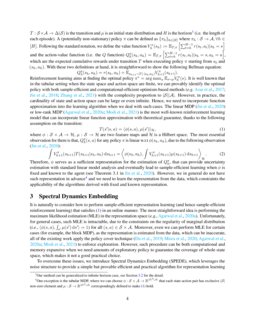 The success of deep reinforcement learning (DRL) is due to the power of ...
Weitong Zhang, et al. ∙

In order to deal with the curse of dimensionality in reinforcement learn...
Alekh Agarwal, et al. ∙

Not having access to compact and meaningful representations is known to ...
Astrid Merckling, et al. ∙

Learning representation has been proven to be helpful in numerous machin...
Guowei Xu, et al. ∙

Markov Decision Process (MDP) is one of the most standard models studied in the reinforcement learning that can be denoted by the tuple M=(S,A,r,T,μ,H), where S is the state space, A is the action space, r:S×A→R+ is the reward function111In general, the reward can be stochastic. Here for simplicity we assume the reward is deterministic and known throughout the paper, which is a common assumption in the literature (, Jin et al., 2018, 2020; Kakade et al., 2020). (where R+ denotes the set of non-negative real numbers), T:S×A→Δ(S) is the transition and μ is an initial state distribution and H is the horizon222Our method can be generalized to infinite horizon case, see Section LABEL:sec:practical_alg for the detail. (i.e. the length of each episode). A (potentially non-stationary) policy π can be defined as {πh}h∈[H] where πh:S→A,∀h∈[H]. Following the standard notation, we define the value function Vπh(sh):=ET,π[∑H−1t=hr(st,at)|sh=s] and the action-value function (i.e. the Q function) Qπh(sh,ah)=ET,π[∑H−1t=hr(st,at)|sh=s,ah=a], which are the expected cumulative rewards under transition T when executing policy π starting from sh and (sh,ah). With these two definitions at hand, it is straightforward to show the following Bellman equation:

Reinforcement learning aims at finding the optimal policy π∗=argmaxπEs∼μVπ0(s). It is well known that in the tabular setting when the state space and action space are finite, we can provably identify the optimal policy with both sample-efficient and computational-efficient optimism-based methods ( Azar et al., 2017; Jin et al., 2018; Zhang et al., 2021) with the complexity proportion to |S||A|. However, in practice, the cardinality of state and action space can be large or even infinite. Hence, we need to incorporate function approximation into the learning algorithm when we deal with such cases. The linear MDP (Jin et al., 2020) or low-rank MDP (Agarwal et al., 2020; Modi et al., 2021) is the most well-known reinforcement learning model that can incorporate linear function approximation with theoretical guarantee, thanks to the following assumption on the transition:

where ϕ:S×A→H, μ:S→H are two feature maps and H is a Hilbert space. The most essential observation for them is that, Qπh(s,a) for any policy π is linear w.r.t ϕ(sh,ah), due to the following observation (Jin et al., 2020):

serves as a sufficient representation for the estimation of

Qπh, that can provide uncertainty estimation with standard linear model analysis and eventually lead to sample-efficient learning when ϕ is fixed and known to the agent (see Theorem 3.1 in Jin et al., 2020). However, we in general do not have such representation in advance333One exception is the tabular MDP, where we can choose ϕ:S×A→R|S|2|A| that each state-action pair has exclusive |S| non-zero element and μ:S→R|S|2|A| correspondingly defined to make (1) hold. and we need to learn the representation from the data, which constraints the applicability of the algorithms derived with fixed and known representation.

In this section, we provide theoretical results for tbd, showing that tbd can identify informative representation and as a result, near-optimal policy in a sample-efficient way. We first define the notation of regret. Assume at episode k, the learner chooses the policy πk and observes a sequence {(skh,akh)}H−1h=0. We define the regret of the first K episodes (and define T:=KH) as:

We want to provide a regret upper bound that is sublinear in T, as when T increases, we collect more data that can help us build a much more accurate estimation on the representation, which should decrease the per-step regret and make the overall regret scale sublinear in T

. As we consider the Thompson Sampling algorithm, we would like to study the expected regret

Before we start, we first state the assumptions we use to derive our theoretical results.

Assumptions on the environment

Assumptions on the function class F

In practice, we generally approximate f∗ with some complicated function approximators, so we focus on the setting where we want to find f∗ from a general function class F that need not to be linear with certain feature map. This can be helpful for MuJoCo benchmarks that have angle, angular velocity and torque of the agent in the raw state, which we don’t know how to construct the feature map to make f linear. We first state some necessary definitions and assumptions on F. [ℓ2-norm of functions] Define ∥f∥2:=max(s,a)∈S×A∥f(s,a)∥2. Notice that it is not the commonly used ℓ2 norm for the function, but it suits our purpose well. [Bounded Output] We assume that ∥f∥2≤C, ∀f∈F. [Realizability] We assume the ground truth dynamic function f∗∈F. We then define the notion of covering number, which will be helpful in our algorithm derivation.

Besides the bounded covering number, we also need an additional assumption on bounded eluder dimension, which is defined in the following: [ϵ-dependency (Osband and Van Roy, 2014)] A state-action pair (s,a)∈S×A is ϵ-dependent on {(si,ai)}i∈[n]⊆S×A with respect to F, if ∀f,~f∈F satisfying √∑i∈[n]∥f(si,ai)−~f(si,ai)∥22≤ϵ satisfies that ∥f(s,a)−~f(s,a)∥2≤ϵ. Furthermore, (s,a) is said to be ϵ-independent of {(si,ai)}i∈[n] with respect to F if it is not ϵ-dependent on {(si,ai)}i∈[n]. [Eluder Dimension (Osband and Van Roy, 2014)] We define the eluder dimension dimE(F,ϵ) as the length d of the longest sequence of elements in S×A, such that ∃ϵ′≥ϵ, every element is ϵ′-independent of its predecessors.

where ~O represents the order up to logarithm factors. For finite dimensional function class, logN(F,T−1/2,∥⋅∥2) and dimE(F,T−1/2)) should be scaled like polylog(T), hence our upper bound is sublinear in T. The proof is in Appendix LABEL:sec:technical_proof. Here we briefly sketch the proof idea.

With the optimism, we know for episode k, V∗0(sk0)≤~Vπk0,k(sk0), where ~Vπkh,k is the value function of policy πk under the model ~fk introduced in the UCB algorithm. Hence, the regret at episode k can be bounded by ~Vπk0,k(sk0)−Vπk0(sk0), which is the value difference of the policy πk under the two models ~fk and f∗, that can be bounded by √E[∑H−1h=0∥f∗(skh,akh)−~fk(skh,akh)∥22] (see Lemma LABEL:lem:simulation for the details), which means when the estimated model ^f is close to the real model f∗, the policy obtained by planning on ^f will only suffer from a small regret. With Cauchy-Schwartz inequality, we only need to bound E[∑k∈[K]∑H−1h=0∥f∗(skh,akh)−~fk(skh,akh)∥22]. This term can be handled via Lemma LABEL:lem:width_sum_bound. With some additional technical steps, we can obtain the upper bound on Regret(K) for the UCB algorithm, and hence the upper bound on EP(f)[Regret(K)] for the TS algorithm. ∎

Notice that, for the linear function class F={θ⊤φ(s,a):θ∈Rdφ×d} where φ:S×A→Rdφ is a fixed and known feature map of certain RKHS444Note that, the RKHS here is the Hilbert space that contains f(s,a) with the feature from some fixed and known kernel, It is different from the RKHS we introduced in Section LABEL:sec:algorithm, that contains Q(s,a) with the feature k(f(s,a),⋅) where k is the Gaussian kernel., when the feature and the parameters are bounded, the logarithm covering number can be bounded by logN(F,ϵ,∥⋅∥2)≲dφlog(1/ϵ), and the eluder dimension can be bounded by dimE(F,ϵ)≲dφlog(1/ϵ) (see Appendix LABEL:sec:linear_case for the detail, notice that we provide a tighter bound of the eluder dimension compared with the one derived in Osband and Van Roy (2014)). Hence, for linear function class, Theorem 2.2 can be translated into a regret upper bound of ~O(HdφT1/2) for sufficient large T, that matches the results of Kakade et al. (2020)555Note that T in (Kakade et al., 2020) is the number of episodes, and Vmax in (Kakade et al., 2020) can be viewed as H2 when the per-step reward is bounded.. Moreover, for the case of linear bandits when H=1, our bound can be translated into a regret upper bound of ~O(dφT1/2), that matches the lower bound (Dani et al., 2008) up to logarithmic terms.

only contains linear functions w.r.t some known feature map, which constrains its application in practice. We instead, consider the general function approximation, which makes our algorithm applicable for more complicated models like deep neural networks. Meanwhile, the regret bound from

Osband and Van Roy (2014) depends on a global Lipschitz constant for the value function, which can be hard to quantify with either theoretical or empirical method. Instead, our regret bound gets rid of such dependency on the Lipschitz constant with the simulation lemma that carefully exploit the noise structure.

Assume we have a parameterized model fθ. We have some candidate posterior inference methods (for Bayesian neural networks):

Assume we have been provided a fixed model fθ. We want to identify optimal action corresponding to fθ. Notice that we can treat fθ as a simulator. TODO: shall we assume the reward is known? We use k(fθ(s,a),⋅) as the feature where k is the Gaussian kernel with bandwidth σ, and in practice we can use random feature approximation, i.e. sample μi∼N(0,1σ2I), bi∼Uniform([0,2π]), and Φ(f(s,a))=1√k[cos(μ⊤if(s,a)+bi)]i∈[k] where k is the number of random feature we want to use.

We run the value iteration in the following way:

3.3 Interaction with the environment

After we finish the value iteration, we just perform the optimal policy induced by Q (maybe with fixed number of steps), and put the collected data in the replay buffer, then infer the posterior again.