A Framework for Moment Invariants

For more than half a century, moments have attracted lot ot interest in the pattern recognition community.The moments of a distribution (an object) provide several of its characteristics as center of gravity, orientation, disparity, volume. Moments can be used to define invariant characteristics to some transformations that an object can undergo, commonly called moment invariants. This work provides a simple and systematic formalism to compute geometric moment invariants in n-dimensional space. 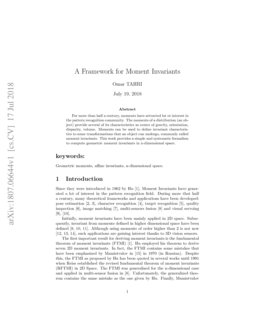 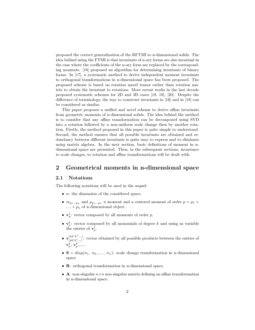 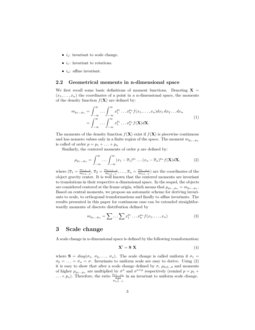 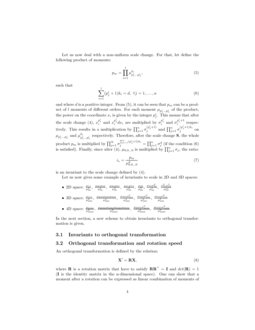 , Moment Invariants have generated a lot of interest in the pattern recognition field. During more that half a century, many theoretical frameworks and applications have been developed: pose estimation

Initially, moment invariants have been mainly applied in 2D space. Subsequently, invariant from moments defined in higher dimensional space have been defined [8, 10, 11]. Although using moments of order higher than 2 is not new [12, 13, 14], such applications are gaining interest thanks to 3D vision sensors.

The first important result for deriving moment invariants is the fundamental theorem of moment invariants (FTMI) [1]. Hu employed his theorem to derive seven 2D moment invariants. In fact, the FTMI contains some mistakes that have been emphasized by Mamistvalov in [15] in 1970 (in Russian). Despite this, the FTMI as proposed by Hu has been quoted in several works until 1991 when Reiss established the revised fundamental theorem of moment invariants (RFTMI) in 2D Space. The FTMI was generalized for the n-dimensional case and applied in multi-sensor fusion in [8]. Unfortunately, the generalized theorem contains the same mistake as the one given by Hu. Finally, Mamistvalov proposed the correct generalization of the RFTMI to n-dimensional solids. The idea behind using the FTMI is that invariants of n-ary forms are also invariant in the case where the coefficients of the n-ary form are replaced by the corresponding moments. [16] proposed an algorithm for determining invariants of binary forms. In [17]

, a systematic method to derive independent moment invariants to orthogonal transformations in n-dimensional space has been proposed. The proposed scheme is based on rotation speed tensor rather than rotation matrix to obtain the invariant to rotations. More recent works in the last decade proposed systematic schemes for 2D and 3D cases

This paper proposes a unified and novel scheme to derive affine invariants from geometric moments of n-dimensional solids. The idea behind the method is to consider that any affine transformation can be decomposed using SVD into a rotation followed by a non-uniform scale change then by another rotation. Firstly, the method proposed in this paper is quite simple to understand. Second, the method ensures that all possible invariants are obtained and redundancy between different invariants is quite easy to express and to eliminate using matrix algebra. In the next section, basic definitions of moment in n-dimensional space are presented. Then, in the subsequent sections, invariance to scale changes, to rotation and affine transformations will be dealt with.

The following notations will be used in the sequel:

We first recall some basic definitions of moment functions. Denoting X=(x1,…,xn) the coordinates of a point in a n-dimensional space, the moments of the density function f(X) are defined by:

The moments of the density function f(X) exist if f(X) is piecewise continuous and has nonzero values only in a finite region of the space. The moment mp1…pn is called of order p=p1+…+pn

Similarly, the centered moments of order p are defined by:

where (¯¯¯x1=m1,0…0m0,0…0,¯¯¯x2=m0,1,0…0m0,0…0,…,¯¯¯xn=m0…0,nm0,0…0) are the coordinates of the object gravity center. It is well known that the centered moments are invariant to translations in their respective n-dimensional space. In the sequel, the objects are considered centered at the frame origin, which means that μp1…pn=mp1…pn. Based on central moments, we propose an automatic scheme for deriving invariants to scale, to orthogonal transformations and finally to affine invariants. The results presented in this paper for continuous case can be extended straightforwardly moments of discrete distribution defined by

A scale change in n-dimensional space is defined by the following transformation:

where S=diag(σ1,σ2,…,σn). The scale change is called uniform if σ1=σ2=…=σn=σ. Invariants to uniform scale are easy to derive. Using (2) it is easy to show that after a scale change defined by σ, μ0,0…0 and moments of higher μp1…pn are multiplied by σn and σn+p respectively (remind p=p1+…+pn). Therefore, the ratio μp1…pnμp+nn0,0…0 in an invariant to uniform scale change.

Let us now deal with a non-uniform scale change. For that, let define the following product of moments:

and where d is a positive integer. From (5), it can be seen that pm can be a product of l moments of different orders. For each moment μpi1…pin of the product, the power on the coordinate xi is given by the integer pij. This means that after the scale change (4), xpiji and xpijidxi are multiplied by σpiji and σpij+1i respectively. This results in a multiplication by ∏nj=1σ(pij+1)j and ∏nj=1σ(pij+1)kij on μpi1…pin and μkipi1…pin respectively. Therefore, after the scale change S, the whole product pm is multiplied by ∏Nj=1σ∑li=1(pij+1)kij=∏nj=1σdj (if the condition (6) is satisfied). Finally, since after (4), μ0,0…0 is multiplied by ∏nj=1σj, the ratio:

is an invariant to the scale change defined by (4).

Let us now gives some example of invariants to scale in 2D and 3D spaces:

In the next section, a new scheme to obtain invariants to orthogonal transformation is given.

An orthogonal transformation is defined by the relation:

is the identity matrix in the n-dimensional space). One can show that a moment after a rotation can be expressed as linear combination of moments of the same order, where the coefficients of those combinations are polynomials on rotation matrix entries. The rotation invariance of some functions of moments are obtained thanks to the orthogonality condition of

R. The latter is composed of constraints that are nothing but polynomials of orders 2

on the rotation matrix entries. For this reason, it is not possible to build invariants to rotations from moments of odd orders without putting them to some even power.

Rather basing our reasoning on the rotation matrix and its orthogonality condition, it is possible to build invariants based on rotation speed (Tensor) in very simple way. For that, let us consider that an n-dimensional solid undergoes a transformation in time. If a rotational speed is applied, the speed of each point of an n-dimensional object is given by:

where L is an antisymmetric matrix defined by rotational speeds in the 2D planes built by two different axes. For instance L is defined as follows:

Actually, every two frame axis of an n-dimensional space specifies a 2D plane. Therefore, there exist n!(n−2)!2! different planes and then the same number of rotational speeds.

Since the matrix L is antisymmetric (the diagonal entries are null), we have ∂˙xi∂xi=0. This implies that the third term of (13) vanishes when rotational speeds are applied to the object. The second term of (13) vanishes as well if we assume that the time derivative of density function ˙f(x1,…,xn)=0. The latter assumption has been also made in [22] and [23] to prove the the Revised FTMI. Assuming ˙f(x1,…,xn)=0 means that applying a rotation on the object point does not change its corresponding density function value. According to (9), we have ˙xi=∑nj=0lijxj (lij are the entries of the matrix L). Combining this with (13), the time variation of moment caused by rotational speeds can be obtained by:

Let us now consider for instance moments from 2D, 3D and 4D spaces.

In the next section, a simple method to determine invariant to rotations using the relation between the time variation of moments and the rotational speeds.

Let v1p be the vector composed by all moments of order p. Let vkp be the monomials vector of degree k computed from v1p. As an example from 2D space for p=2 and k=2:

Let us also define moment vectors mixing moments of different orders vkp and vk′p′. For instance, by multiplying the entries of v12 and v23, a new moment vector can be obtained as

Moment vectors from three different orders or more can also be defined. For instance m(k,k′,k′′)(p,p′,p′′) by all possible products between the entries of the vectors mkp, mk′p′ and mk′′p′′.

Since mkp is defined by the monomials on m1p, the time derivative ˙mkp can be expressed as linear combination of the mkp entries. We have then

Since Lωiv1p are matrices of integers, Lωivkp are also of the same nature. This is also true for any vectors v(k,k′,k′′)(p,p′,p′′) mixing moments of different orders. In the following, it will be shown that it is easy to build invariants to rotations as linear combination of the entries of the previous kinds of moment vectors.

Let us consider a scalar irkp=αk⊤pvkp, where αkp is a vector of coefficients. Therefore, the time derivative of irkp is defined by:

The scalar irkp is invariant rotation if:

This implies the following condition:

The null space of Lω⊤v12 is:

In the next section, the results about both invariant to rotations and those to non-uniform scale change will be used to derive affine invariants in a very straightforward manner.

Here, the translation has not been considered since we consider that the object is centered. Actually, using singular value decomposition, any non-singular matrix

A can be decomposed as:

where R1 and R2 are rotations and S is non uniform scale change. This means that an affine transformation is equivalent to a rotation followed by a non-uniform scale change then by another rotation. To explain the proposed approach, let us consider building affine invariants from:

Let us consider ia22=α2⊤2vs22. where α2⊤2 is vector of coefficients of the same size as vs22. As it has been shown in the previous section, ia22 is rotation invariant if α2⊤2Lvs22=0. Therefore, it can be obtained that α=ker(L⊤vs22)=[1−1]⊤, which leads to the invariant:

which is the well known and the simplest affine invariant in 2D space. Actually, this scheme can be applied to any moment vector in a n-dimensional space as follow:

The set of constraints given by (23) means that if ir is invariant to rotation, its time variation caused by any of the n!(n−2)!2! rotational speeds is null. Let us consider the case of 3D space. In that case, as it has been mentioned above, there exist ω1, ω2, ω3 are respectively the rotation speeds in the planes yz, zx and xy respectively. Let us consider a vector of 3D moments vkp and irkp=αk⊤pvkp an invariant to rotations. According to (???), α satisfies the three conditions:

In practice, the matrices Lωi⊤vkp are very sparse. First, when they are calculated and stored, one can consider only non-null values. Second, the vector of coefficients can be computed using null space adapted to sparse matrix. This becomes necessary for large moment vectors. To give an idea how sparse are those matrix, let us consider the 3D moment vector v43, which is of size equal to 715. Let us consider computing an affine invariant from this vector. In that case, the entries of v43 satisfying the condition to be invariant to non-uniform scale change (6) are only 25. From these entries, an invariant vector to non-uniform scale can be defined by: