Recent extensive numerical experiments in high scale machine learning have allowed to uncover a quite counterintuitive phase transition, as a function of the ratio between the sample size and the number of parameters in the model. As the number of parameters p approaches the sample size n, the generalisation error (a.k.a. testing error) increases, but it many cases, it starts decreasing again past the threshold p=n. This surprising phenomenon, brought to the theoretical community attention in <cit.>, has been thorougly investigated lately, more specifically for simpler models than deep neural networks, such as the linear model when the parameter is taken to be the minimum norm solution to the least-square problem, mostly in the asymptotic regime when p and n tend to +∞; see e.g. <cit.>. In the present paper, we propose a finite sample analysis of non-linear models of ridge type, where we investigate the double descent phenomenon for both the estimation problem and the prediction problem. Our results show that the double descent phenomenon can be precisely demonstrated in non-linear settings and complements recent works of <cit.> and <cit.>. Our analysis is based on efficient but elementary tools closely related to the continuous Newton method <cit.>. 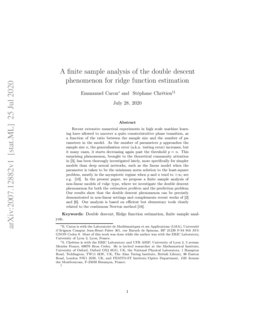 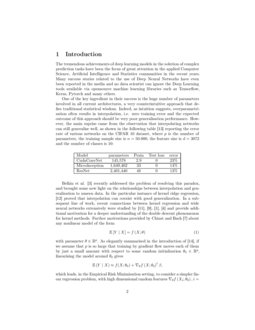 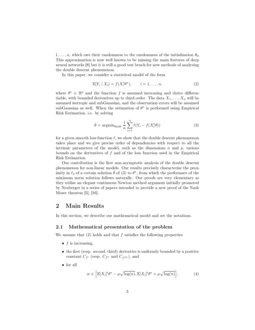 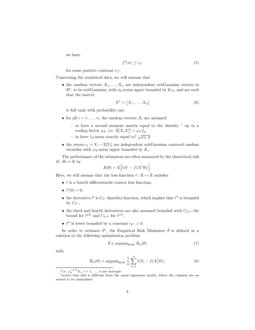 Double descent refers to the phase transition that is exhibited by the g...
Michał Dereziński, et al. ∙

Sharp Asymptotics of Kernel Ridge Regression Beyond the Linear Regime

Triple descent and the two kinds of overfitting: Where why do they appear?

A recent line of research has highlighted the existence of a double desc...
Stéphane d'Ascoli, et al. ∙

The tremendous achievements of deep learning models in the solution of complex prediction tasks have been the focus of great attention in the applied Computer Science, Artificial Intelligence and Statistics communities in the recent years. Many success stories related to the use of Deep Neural Networks have even been reported in the media and no data scientist can ignore the Deep Learning tools available via opensource machine learning libraries such as Tensorflow, Keras, Pytorch and many others.

One of the key ingredient in their success is the huge number of parameters involved in all current architectures, a very counterintuitive approach that defies traditional statistical wisdom. Indeed, as intuition suggests, overparametrisation often results in interpolation, i.e. zero training error and the expected outcome of this approach should be very poor generalisation performance. However, the main suprise came from the observation that interpolating networks can still generalise well, as shown in the following table

[soltanolkotabi2019imaginginparis] reporting the error rate of various networks on the CIFAR 10 dataset, where p is the number of parameters, the training sample size is n=50.000, the feature size is d=3072 and the number of classes is 10:

recently addressed the problem of resolving this paradox, and brought some new light on the relationships between interpolation and generalization to unseen data. In the particular instance of kernel ridge regression,

[liang2018just] proved that interpolation can coexist with good generalization. In a subsequent line of work, recent connections between kernel regression and wide neural networks extensively were studied by [jacot2018neural], [du2018gradient], [allen2018convergence], [belkin2018understand] and provide additional motivation for a deeper understanding of the double descent phenomenon for kernel methods. Further motivations provided by Chizat and Bach [chizat2018note] about any nonlinear model of the form

with parameter θ∈Rp. As elegantly summarised in the introduction of [mei2019generalization], if we assume that p is so large that training by gradient flow moves each of them by just a small amount with respect to some random initialization θ0∈Rp, linearising the model around θ0 gives

which leads, in the Empirical Risk Minimisation setting, to consider a simpler linear regression problem, with high dimensional random features

∇θf(Xi;θ0),i=1,…,n, which owe their randomness to the randomness of the initialisation θ0. This approximation is now well known to be missing the main features of deep neural networks [chizat2019lazy] but it is still a good test bench for new methods of analysing the double descent phenomenon.

In this paper, we consider a statistical model of the form

where θ∗∈Rp and the function f is assumed increasing and thrice differentiable, with bounded derivatives up to third order. The data X1,…,Xn will be assumed isotropic and subGaussian, and the observation errors will be assumed subGaussian as well. When the estimation of θ∗ is performed using Empirical Risk Estimation, i.e. by solving

for a given smooth loss function

ℓ, we show that the double descent phenomenon takes place and we give precise order of dependencies with respect to all the intrinsic parameters of the model, such as the dimensions n and p, various bounds on the derivatives of f and of the loss function used in the Empirical Risk Estimation.

Our contribution is the first non-asymptotic analysis of the double descent phenomenon for non-linear models. Our results precisely characterise the proximity in

ℓ2 of a certain solution ^θ of (3) to θ∗, from which the performace of the minimum norm solution follows naturally. Our proofs are very elementary as they utilise an elegant continuous Newton method argument initially promoted by Neuberger in a series of papers intended to provide a new proof of the Nash Moser theorem [castro2001inverse], [neuberger2007continuous].

In this section, we describe our mathematical model and set the notations.

2.1 Mathematical presentation of the problem

Concerning the statistical data, we will assume that

The performance of the estimators are often measured by the theoretical risk R:Θ↦R by

Here, we will assume that the loss function ℓ:R↦R satisfies

In order to estimate θ∗, the Empirical Risk Minimizer ^θ is defined as a solution to the following optimisation problem

2.2 Statement of our main theorems

Our main result is the following. Their proofs are given in Section B and Section C in the appendix.

Then, with probability at least

the unique solution ^θ to the optimisation problem (7) satisfies

Then, there exists a first order stationary point ^θ to the optimisation problem (7) such that, with probability larger than or equal to

Let the assumptions of Theorem 2.2 hold and let r be defined by (15). Then, there exists a minimum norm first order stationary point ^θ♯ of problem (7) which satisfies

with probability larger than or equal to

for some absolute constants c and C depending of KX, and combining this bound with the result of Theorem 2.2, the announced result follows. ∎

2.3 The case of linear regression

In the linear case where f(Xtiθ)=Xtiθ and the loss is quadratic ℓ(z)=12z2, the optimisation problem (7) is

The quadratic loss function is used with

Then, with probability at least

the unique solution ^θ to the optimisation problem (7) satisfies

Then, there exists a solution ^θ to the optimisation problem (7) such that, with probability larger than or equal to

In addition to the assumptions about our model, let us assume that f(Xtiθ)=Xtiθ and that ℓ(z)=12z2. Let the other assumptions of Corollary 2.5. Then, the minimum norm solution ^θ♯ of problem (7) satisfies

for some constants c and C depending on KX only.

2.4 Discussion of the results and new implications for some classical models

Theorem 2.1 and Theorem 2.2 provide a new finite sample analysis of the problem of estimating ridge functions in both underparametrised and overparametrised regimes, i.e. where the number of parameters is smaller (resp. larger) than the sample size.

In the linear model setting, Corollary 2.4 and Corollary 2.5 give the following simpler results

Our results are based on a new zero finding approach inspired from [neuberger2007continuous] and we obtain precise quantitative results in the finite sample setting for linear and non-linear models. Following the initial discovery of the "double descent phenomenon" in [belkin2019reconciling], many authors have addressed the question of precisely characterising the error decay as a function of the number of parameters in the linear and non-linear setting (mostly based on random feature models). Some of the latest works [mei2019generalization] address the problem in the asymptotic regime. Recently, the finite sample analysis has been addressed in the very interesting works [bartlett2020benign] and [chinot2020benign] for the linear model only. The work of [bartlett2020benign] and [chinot2020benign] give very precise upper and lower bounds on the prediction risk for general covariate covariance matrices under the subGaussian assumption.

In the present work, we show that similar, very precise results can be obtained for non-linear models of the ridge function class, using elementary perturbation results and some (now) standard random matrix theory. Our results provide an explicit control of the distance between some empirical estimators and the ground truth in terms of the subGaussian norms of the error and the covariate vector in the case where the covariate vectors are assumed isotropic (more general results can easily be recovered by a simple change of variable). Our analysis is made very elementary by using Neuberger’s result

[neuberger2007continuous] and the subGaussian isotropic assumption which allows to leverage previous results of [vershynin2010introduction] about finite random matrix with subGaussian rows or columns, depending of the setting (underparametrised vs overparametrised).

This work presents a precise quantitative, finite sample analysis of the double descent phenomenon in the estimation of linear and non-linear models. We make use of a zero-finding result of Neuberger [neuberger2007continuous] which can be applied to a large number of settings in machine learning.

Extending our work to the case of Deep Neural Networks is an exciting avenue for future research. We are currently working on the analysis of the double descent phenomenon in the case of Residual Neural Networks and we expect to post our new findings in a near future. Another possible direction is to include penalisation, which can be treated using the same techniques via Karush-Kuhn-Tucker conditions. This can be applied to Ridge Regression and ℓ1-penalised estimation and makes a promising avenue for future investigations. Weakening the assumptions on our data, which are here of subGaussian type, could also lead to interesting new results; this could be achieved by utilising, e.g. the work of [mendelson2017extending].

The following theorem of Neuberger [neuberger2007continuous] will be instrumental in our study of the ERM. In our context, this theorem can be restated as follows.

Theorem A.1 (Neuberger’s theorem for ERM).

Suppose that r>0, that θ∗∈Rp and that the Jacobian D^Rn(⋅) is a continuous map on Br(θ∗) with the property that for each θ in br(θ∗) there exists a vector d in Br(0) such that,

a.2 Computing the second derivative

where ℓ′(ϵ) is to be understood componentwise, and

and the Hessian is given by

The condition we have to satisfy in order to use Neuberger’s theorem, i.e. the version of (27) associated with our setting, is the following

The Hessian matrix can be rewritten as

where DY,X is a diagonal matrix given by

Appendix B Proof of Theorem 2.1: The under-parametrised case

With probability larger than or equal to 1−2exp(−η2∥θ∗∥22K2X), we have

is subGaussian with variance proxy

KX∥θ∗∥2. Consequently, for all t>0

Lipschitzianity of ℓ′ implies that

for all θ such that

where ci is a number between 0 and 1. Then

We have to control the quantities