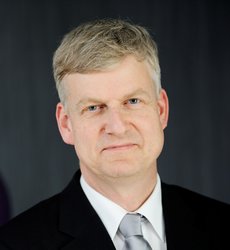 Prof.dr.ir. Wil van der Aalst is a full professor at RWTH Aachen University leading the Process and Data Science (PADS) group. He is also part-time affiliated with the Fraunhofer-Institut für Angewandte Informationstechnik (FIT) where he leads FIT's Process Mining group and the Technische Universiteit Eindhoven (TU/e). Until December 2017, he was the scientific director of the Data Science Center Eindhoven (DSC/e) and led the Architecture of Information Systems group at TU/e. Since 2003, he holds a part-time position at Queensland University of Technology (QUT). Currently, he is also a distinguished fellow of Fondazione Bruno Kessler (FBK) in Trento and a member of the Board of Governors of Tilburg University. His research interests include process mining, Petri nets, business process management, workflow management, process modeling, and process analysis. Wil van der Aalst has published more than 230 journal papers, 22 books (as author or editor), 530 refereed conference/workshop publications, and 80 book chapters. Many of his papers are highly cited (he one of the most cited computer scientists in the world and has an H-index of 155 according to Google Scholar with over 109,000 citations), and his ideas have influenced researchers, software developers, and standardization committees working on process support. He has been a co-chair of many conferences, including the Business Process Management conference, the International Conference on Cooperative Information Systems, the International Conference on the Application and Theory of Petri Nets, and the IEEE International Conference on Services Computing. He is also editor/member of the editorial board of several journals, including Business & Information Systems Engineering, Computing, Distributed and Parallel Databases, Software and Systems Modeling, Computer Supported Cooperative Work, the International Journal of Business Process Integration and Management, the International Journal on Enterprise Modelling and Information Systems Architectures, Computers in Industry, IEEE Transactions on Services Computing, Lecture Notes in Business Information Processing, and Transactions on Petri Nets and Other Models of Concurrency. He is also a member of the Council for Physics and Technical Sciences of the Royal Netherlands Academy of Arts and Sciences and serves on the advisory boards of several organizations, including Fluxicon, Celonis, and UiPath. In 2012, he received the degree of doctor honoris causa from Hasselt University in Belgium. He also served as scientific director of the International Laboratory of Process-Aware Information Systems of the National Research University, Higher School of Economics in Moscow. In 2013, he was appointed as Distinguished University Professor of TU/e and was awarded an honorary guest professorship at Tsinghua University. In 2015, he was appointed as an honorary professor at the National Research University, Higher School of Economics in Moscow. He is also an IFIP Fellow, an IEEE Fellow, and elected member of the Royal Netherlands Academy of Arts and Sciences (Koninklijke Nederlandse Akademie van Wetenschappen), Royal Holland Society of Sciences and Humanities (Koninklijke Hollandsche Maatschappij der Wetenschappen), the Academy of Europe (Academia Europaea), and the North Rhine-Westphalian Academy of Sciences, Humanities and the Arts (Nordrhein-Westfälische Akademie der Wissenschaften und der Künste). In 2018 he was awarded an Alexander-von-Humboldt Professorship, Germany’s most valuable research award (five million euros).

The automation and digitalization of business processes has resulted in ...
Timo Rohrer, et al. ∙

Among the many sources of event data available today, a prominent one is...
Marco Pegoraro, et al. ∙

How to Write Beautiful Process-and-Data-Science Papers?

A Scalable Database for the Storage of Object-Centric Event Logs

The premise of this paper is that compliance with Trustworthy AI governa...
Andrew Pery, et al. ∙

May I Take Your Order? On the Interplay Between Time and Order in Process Mining

A Framework for Explainable Concept Drift Detection in Process Mining

PROVED: A Tool for Graph Representation and Analysis of Uncertain Event Data

Inferring Unobserved Events in Systems With Shared Resources and Queues

A Python Extension to Simulate Petri nets in Process Mining

Process mining is a discipline which concerns the analysis of execution ...
Marco Pegoraro, et al. ∙