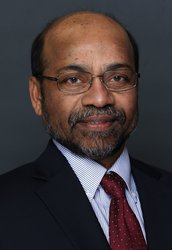 Dr. Vijayan Asari is University of Dayton's ORS (Ohio Research Scholars) Endowed Chair in Wide Area Surveillance and a Professor in the Department of Electrical and Computer Engineering at the University of Dayton. He is the Director of the University of Dayton Vision Lab (Center of Excellence for Computational Intelligence and Machine Vision). He also holds an advisory position as Vice President of Artificial Intelligence at Deep Lens, Inc., Columbus, Ohio. Dr. Vijayan Asari is an elected Fellow of SPIE (Society of Photo-Optical Instrumentation Engineers) and a Senior Member of IEEE (Institute of Electrical and Electronics Engineers).

One of the recent significant advancements in Dr. Asari's research group is in the development of deep learning based autonomous systems for digital pathology image analysis for abnormal region segmentation by accurate abnormality detection and classification, and prediction of abnormalities for diagnostic purposes.