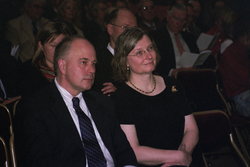 Ingrid Daubechies is a Belgian mathematician and physicist. She is best known for her image compression wavelet work.

Her research involves the utilization of both mathematical, technological and biological automatic methods to extract information from samples such as teeth and bones. She also developed advanced imaging methods that help establish the authenticity and age of some of the most famous artworks in the world, including Vincent van Gogh and Rembrandt’s paintings.

Daubechies was born as the daughter of Marcel Daubechies and Simonne Duran in Houthalen, Belgium. She remembers, that she did not count numbers as you would expect from a child when she was a little girl and could not sleep, but started multiplying numbers by two from the memory. She therefore already knew the properties of exponential growth as a child. Her parents found that she knew mathematical concepts such as the cone and tetrahedron before she was 6. She excelled at primary school, and after only 3 months she moved up to school. After finishing the Lyceum in Hasselt, Daubechies entered the University of Vrije in Brussels at 17. In 1975, she completed her PhD study at Vrije Universiteit Brussel. During the next few years she has visited several times the CNRS Theoretical Physics Center in Marseilles where she has worked together with Alex Grossmann; her doctorate in quantum mechanics was based on this work. In 1980, she received her doctorate in theoretical physics.

In 1987 Daubechies continued his research career in the Vrije Universiteit in Brussels and in 1981 was appointed as a researcher and in 1985 as a Research Assistant Professor, funded by a NFWO fellowship. Daubechies worked mostly as a guest researcher in 1986 at the Courant Institute of Mathematical Sciences. At Courant she made her best known discovery: on the basis of square mirror filter technology, she constructed a compactly supported continuous wavelet, which required only a finite amount of processing, allowing the wavelet theory in the field of digital signal processing. In 1988 she published the results in Communications on Pure and Applied Mathematics, where she held a professorship in applied and compute mathematics at Princeton University from 1994 to 2010. She was the first female full mathematics professor at Princeton. She moved to Duke University in January 2011 to be a mathematics professor. She is currently Professor James B. Duke in the Department of Mathematics and Electrical Engineering and Informatics at Duke University as of 2019. In 2016, she and Heekyoung Hahn founded William R. Kenan, Jr., a Duke Summer Workshop in mathematics for women rising in secondary school seniors. University of Princeton Professor of Mathematics and Applied Mathematics. For 16 years she taught at Princeton. In January 2011, as James B. Duke Professor of Mathematics, she was transferred to Duke University.

The first woman to be president of the International Mathematical Union was Daubechies.

Daubechies received the 1984 Louis Empain Physics Prize, once every five years, on the basis of work done before the age of 29. She was a fellow of the MacArthur Foundation from 1992 to 1997 and was elected to the American Academy of Arts and Science in 1993. In 1994, for her book Ten Lectures on Wavelets she received the American Mathematical Society Steele Prize for Exhibition and was invited to give a plenary lecture at the Zurich International Congress of Mathematicians. She received the AMS Ruth Lyttle Satter Prize in 1997. In 1998, she was elected to the United States National Academy of Sciences, and won the IEEE Information Theory Society’s Golden Jubilee Award for Technological Innovation

In 2000, Daubechies became the first woman to be awarded the National Academy of Mathematical Sciences Award, which is presented every 4 years for excellence in published mathematical research. The award recognized her as “a fundamental discovery of wavelets and wavelets and her role in making wavelet methods a basic practical tool for applied math.” In January 2005, Daubechies has been the third woman to present Josiah Willard Gibbs Lecture, sponsored by the American Mathematical Society, since 1924. Awarded by the German Eduard Rhein Foundation and the NAS Mathematics Award. Her lecture was on “The Interplay Between Analysis and Algorithm.” Daubechies was the lecturer at the San Antonio Joint Mathematics Conferences for Emmy Noether in 2006. In September 2006, Daubechies and Heinz Engl received the Pioneer Prize from the International Council for Industrial and Applied Mathematics. In 2010, Daubechies received her Honorary PhD from the Norwegian Science and Technology University. In 2011, she became a SIAM John von Neumann Professor, and received the IEEE Jacks S Kilby Signal Processing Medal, the Leroy P. Steele. She also won the Mathematics Nemmers Prize, Northwestern University, in 2012.

In 2015, the BBVA Foundation Frontiers of Knowledge Award for Basic Sciences was presented to the German Mathematical Society by Daubechies for a lecture. Daubechies has been awarded the Simons Foundation, a New York-based private foundation to promote research in mathematics and basic sciences, which provides money to professors of American and Canadian universities to foster new partnerships between mathematicians and researchers across sciences. In 2018, Daubechies was awarded the William Benter Awards in Applied Mathematics by City University of Hong Kong. Simons suggested that the Foundation should not fund new research. She is the first female award recipient. The winner of a Fudan-Zhongzhi science award in 2018 was Prof. Daubechies’ pioneering work in the wave theory and her “exceptional contributions to a wide range of scientific and mathematical topics…their work in enabling the mobile smartphone revolution is truly symbolic of the era,” said Professor Daubechies. She is a member of the Association for Women in Mathematics 2019 class of fellows.

In 1985, Daubechies met Robert Calderbank, a mathematician, then a three-month exchange visit from the AT&T Bell Laboratories, in New Jersey, to Philips Research’s Brussels mathematical division; they married in 1987. They’ve got two kids, Michael and Carolyn Calderbank.

In the desire to quantify the success of neural networks in deep learnin...
Ingrid Daubechies, et al. ∙

Image Separation with Side Information: A Connected Auto-Encoders Based Approach

The approximation of both geodesic distances and shortest paths on point...
Barak Sober, et al. ∙

This paper is concerned with stable phase retrieval for a family of phas...
Cheng Cheng, et al. ∙

As a means of improving analysis of biological shapes, we propose a gree...
Tingran Gao, et al. ∙

A Tale of Two Bases: Local-Nonlocal Regularization on Image Patches with Convolution Framelets

The preservation of our cultural heritage is of paramount importance. Th...
Bruno Cornelis, et al. ∙