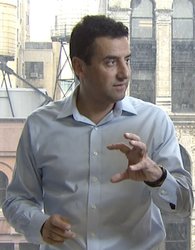 Gérard Ben Arous is a French mathematician specialized in stochastic analysis and mathematical physics applications. He is currently Director of the Courant Institute of Mathematical Sciences at the University of New York.

In 1988 he was appointed professor at the University of Paris-Sud, and from 1992 to 1994 was chairman of the Department of Mathematics. From 1994 to 1997, he was professor at ENS and chair of the Departments of Mathematics and Informatics. From 1997 to 2007, Ben Arous held the chair of Stochastic Modelling at École Polytechnique Fédérale de Lausanne and founded the Institut Bernoulli in 2001. He has been a professor at New York University’s Courant Institute of Mathematical Sciences since 2002. As acting Director of the Courant Institute in 2009, Ben Arous became Director in 2011. In 2011, he was appointed Vice Provost for Science and Engineering at New York University.

Professor Ben Arous deals with probability theory and its links to other fields of mathematics, physics or industrial applications. He is mainly interested in the time development of complex systems and their long-term behavior and slow equilibrium relaxation, in particular how complexity and disorder entail aging. He is a fellow of the Institute of Mathematical Statistics and an elected member of the ISI.

Ben Arous was awarded the Rollo Davidson Prize in 1993. In 1996 he lectured Large deviations as a common probabilistic instrument for certain analytical, geometric and physical problems at the European Mathematicians’ Congress in Budapest. He was invited to speak at the international mathematician’s conference in Beijing in 2002, giving a talk on the dynamics of aging and spin glass.

He edited the European Mathematical Society Journal. He has been managing editor for the theory of probability and related fields since 2010. He was elected to the American Academy of Arts and Sciences in 2015. He is a Fellow of the Institute of Mathematical Statistics and an elected member of the ISSI. He was a Bourbaki member. He has studied PhD with Antonio Auffinger, Raphaël Cerf, Ivan Corwin, Alice Guionnet, Sandrine Péché and others.

In this paper, we consider the singular values and singular vectors of l...
Gérard Ben Arous, et al. ∙

Landscape Complexity for the Empirical Risk of Generalized Linear Models

We present a method to obtain the average and the typical value of the n...
Antoine Maillard, et al. ∙

The landscape of the spiked tensor model

The Loss Surfaces of Multilayer Networks

We study the connection between the highly non-convex loss function of a...
Anna Choromanska, et al. ∙