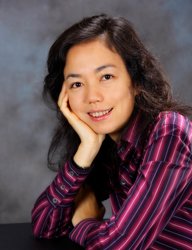 In 2017, she co-founded AI4ALL, a nonprofit with the mission of creating diversity and inclusion in artificial intelligence. She has published over 50 research papers since the year 2000 and has been cited almost 50,000 times in that span.

Emotion cause pair extraction (ECPE), as one of the derived subtasks of ...
Shunjie Chen, et al. ∙

Glaucoma is the second leading cause of blindness and is the leading cau...
Huihui Fang, et al. ∙

A Review of Computer Vision Technologies for Fish Tracking

Hypoglycemia is common and potentially dangerous among those treated for...
Yonghao Jin, et al. ∙

An SOA Based Design of JUNO DAQ Online Software

We restrict the degenerate quadratic forms of a finite field to its subs...
Fei Li, et al. ∙