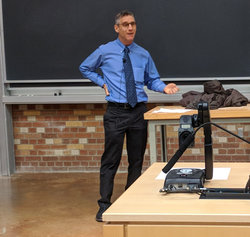 In 2002, Gelman married and has three children, Caroline Rosenthal. The psychologist Susan Gelman is his older sister. Woody Gelman, the cartoonist, was his uncle.

At present, Gelman is a political science and statistics professor at the University of Columbia, where he also heads the Applied Statistical Center. The Applied Statistics Center conducts research at Columbia University and includes a number of individual projects with several other departments. Gelmann is a Bayesian statistics practitioner and hierarchical models. He contributes greatly to Stan’s framework of statistical programming.

Gelman is noteworthy for his efforts to make journalists and the public more accessible to political science and statistics. He is one of the main authors of The Monkey Cage, a blog from the Washington Post dedicated to providing informed commentary on political science, and making political science accessible. He often writes about Bayesian statistics, displays data and interesting social science trends. According to the New York Times, on the blog “he postes his thoughts on good statistical practices in the sciences, frequently emphasizing what he sees as the absurd or the unscientific… he is sufficiently respected that his posts are read well; he cuts down sufficiently that many of his critics have a strong sense of joy.”

Toward a Taxonomy of Trust for Probabilistic Machine Learning

The piranha problem: Large effects swimming in a small pond

In some scientific fields, it is common to have certain variables of int...
Christopher Tosh, et al. ∙

To design interfaces for exploratory data analysis, we need theories of graphical inference

Making the most of imprecise measurements: Changing patterns of arsenic concentrations in shallow wells of Bangladesh from laboratory and field data

What are the most important statistical ideas of the past 50 years?

We argue that the most important statistical ideas of the past half cent...
Andrew Gelman, et al. ∙

If we have an unbiased estimate of some parameter of interest, then its ...
Erik van Zwet, et al. ∙

A Fast Linear Regression via SVD and Marginalization

We describe a numerical scheme for evaluating the posterior moments of B...
Philip Greengard, et al. ∙

Stacking for Non-mixing Bayesian Computations: The Curse and Blessing of Multimodal Posteriors

Accounting for Uncertainty During a Pandemic

Every philosophy has holes, and it is the responsibility of proponents o...
Andrew Gelman, et al. ∙

Know your population and know your model: Using model-based regression and poststratification to generalize findings beyond the observed sample

Psychology is all about interactions, and this has deep implications for...
Lauren Kennedy, et al. ∙

The Political Significance of Social Penumbras

The experiment is just as important as the likelihood in understanding the prior: A cautionary note on robust cognitive modelling

Slamming the sham: A Bayesian model for adaptive adjustment with noisy control data

It is not always clear how to adjust for control data in causal inferenc...
Andrew Gelman, et al. ∙

Rank-normalization, folding, and localization: An improved R for assessing convergence of MCMC

This article is an invited discussion of the article by Gronau and Wagen...
Aki Vehtari, et al. ∙

Verifying the correctness of Bayesian computation is challenging. This i...
Sean Talts, et al. ∙

Yes, but Did It Work?: Evaluating Variational Inference

While it's always possible to compute a variational approximation to a p...
Yuling Yao, et al. ∙

Bayesian Inference under Cluster Sampling with Probability Proportional to Size

Expectation propagation as a way of life: A framework for Bayesian inference on partitioned data