The purpose of generative Zero-shot learning (ZSL) is to learning from seen classes, transfer the learned knowledge, and create samples of unseen classes from the description of these unseen categories. To achieve better ZSL accuracies, models need to better understand the descriptions of unseen classes. We introduce a novel form of regularization that encourages generative ZSL models to pay more attention to the description of each category. Our empirical results demonstrate improvements over the performance of multiple state-of-the-art models on the task of generalized zero-shot recognition and classification when trained on textual description-based datasets like CUB and NABirds and attribute-based datasets like AWA2, aPY and SUN. 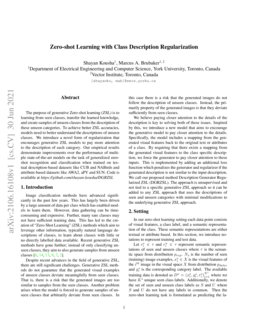 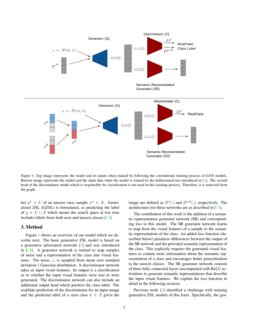 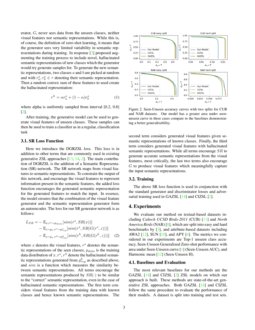 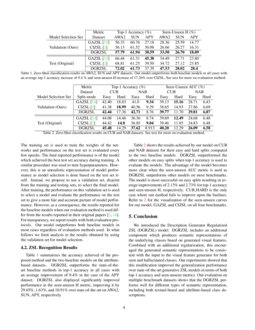 Image classification methods have advanced significantly in the past few years. This has largely been driven by a large amount of data per class which has enabled models to learn them. However, data gathering can be time-consuming and expensive. Further, many rare classes may not have sufficient training data. This has led to the creation of “Zero-Shot Learning” (ZSL) methods which aim to leverage other information, typically natural language descriptions of classes, to learn about classes with little or no directly labelled data available. Recent generative ZSL methods have gone further; instead of only classifying unseen classes, they aim to also generate samples from unseen classes

Let rsi∈τ and rui∈τ represent semantic representations of seen and unseen classes where τ is the semantic space from distribution prep. Ns is the number of seen (training) image examples, xsi∈X is the visual features of the ith image in the visual space X from distribution pdata, and ysi is the corresponding category label. The available training data is denoted as Ds=(xsi,ysi,rsi)Nsi=1 where we have Ks unique seen class labels. Additionally, we denote the set of seen and unseen class labels as S and U where S and U do not have any labels in common. Then the zero-shot learning task is formulated as predicting the label yu∈U of an unseen class sample xu∈X. Generalized ZSL (GZSL) is formulated, as predicting the label of y∈U∪S which means the search space at test time includes labels from both seen and unseen classes [xian2020zeroshot].

shows an overview of our model which we describe next. The basic generative ZSL model is based on a generative adversarial network

[goodfellow2014generative] and was introduced in [Yizhe_ZSL_2018]. A generator network is trained to map samples of noise and a representation of the class into visual features. The noise, z

k∈S given the image are defined as Dr(.) and Ds,k(.), respectively. The architectures for these networks are as described in [Yizhe_ZSL_2018].

After training, the generative model can be used to generate visual features of unseen classes. These samples can then be used to train a classifier as in a regular, classification task

Here we introduce the DGRZSL loss. This loss is in addition to other terms that are commonly used in existing generative ZSL approaches [xian2018feature, Yizhe_ZSL_2018, Mohamed_Creative_2019]

The above SR loss function is used in conjunction with the standard generator and discriminator losses and adversarial training used in GAZSL [Yizhe_ZSL_2018] and CIZSL [Mohamed_Creative_2019].

We evaluate our method on textual-based datasets including Caltech UCSD Birds-2011 (CUB) [WahCUB_200_2011] and North America Birds (NAB) [7298658], which are split into easy and hard benchmarks by [elhoseiny2017link], and attribute-based datasets including AWA2 [xian2020zeroshot], SUN [conf/cvpr/PattersonH12], and APY [5206772]. The metrics we considered in our experiments are Top-1 unseen class accuracy, Seen-Unseen Generalized Zero-shot performance with area under Seen-Unseen curve [chao2017empirical]

and CIZSL follow the same procedure to evaluate the performance of their models. A dataset is split into training and test sets. The training set is used to train the weights of the networks and performance on the test set is evaluated every few epochs. The final reported performance is of the model which achieved the best test set accuracy during training. A similar procedure was used to tune hyperparameters. However, this is an unrealistic representation of model performance as model selection is done based on the test set itself. Instead, we propose to use a validation set, disjoint from the training and testing sets, to select the final model. After training, the performance on this validation set is used to select a model and evaluate the performance on the test set to give a more fair and accurate picture of model performance. However, as a consequence, the results reported for the baseline models when our evaluation method is used differ from the results reported in their original papers

[Mohamed_Creative_2019, Yizhe_ZSL_2018]. For transparency, we report results with both evaluation protocols. Our model outperforms both baseline models in most cases regardless of evaluation methods used. In what follows we limit analysis to the results obtained by using the validation set for model selection.

Table 1 summarizes the accuracy achieved of the proposed method and the two baseline models on the attribute-based datasets. DGRZSL outperforms the state-of-the-art baseline methods in top-1 accuracy in all cases with an average improvement of 9.4% in the case of the APY dataset. DGRZSL also displayed significantly improved performance in the seen-unseen H metric, improving it by 29.65%, 1.63%, and 10.91% over state-of-the-art on AWA2, SUN, APY, respectively.

Table 2 shows the results achieved by our model on CUB and NAB datasets for their easy and hard splits compared to the two baseline models. DGRZSL outperformed the other models on easy splits when top-1 accuracy is used to evaluate the models. The advantage of the model becomes more clear when the seen-unseen AUC metric is used as DGRZSL outperforms other models on most benchmarks. The model is most successful on easy splits resulting in average improvements of 2.13% and 2.73% for top-1 accuracy and seen-unseen H, respectively. CUB_HARD is the only case where our method fails to improve upon the baslines. Refer to 2 for the visualization of the seen-unseen curves for our model, GAZSL and CIZSL on all four benchmarks.

We introduced the Description Generator Regularized ZSL (DGRZSL) model. DGRZSL includes an additional component which produces semantic representations of the underlying classes based on generated visual features. Combined with an additional regularization, this encouraged the generated semantic representations to be consistent with the input to the visual feature generator for both seen and hallucinated classes. Our experiments showed that this modification improved the generalization performance over state-of-the-art generative ZSL models in terms of both top-1 accuracy and seen-unseen metrics. Our evaluation on multiple benchmark datasets shows that the DGRZSL performs well for different types of semantic representation, including both textual-based and attribute-based class descriptions.