There are several isomorphic constructions for the irreducible polynomial representations of the general linear group in characteristic zero. The two most well-known versions are called Schur modules and Weyl modules. Steven Sam used a Weyl module implementation in 2009 for his Macaulay2 package PieriMaps. This implementation can be used to compute so-called Young flattenings of polynomials. Over the Schur module basis Oeding and Farnsworth describe a simple combinatorial procedure that is supposed to give the Young flattening, but their construction is not equivariant. In this paper we clarify this issue, present the full details of the theory of Young flattenings in the Schur module basis, and give a software implementation in this basis. Using Reuven Hodges' recently discovered Young tableau straightening algorithm in the Schur module basis as a subroutine, our implementation outperforms Sam's PieriMaps implementation by several orders of magnitude on many examples, in particular for powers of linear forms, which is the case of highest interest for proving border Waring rank lower bounds. 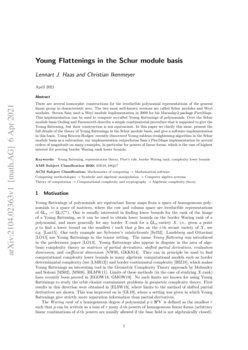 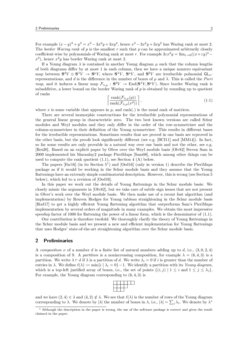 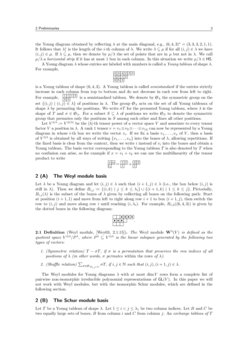 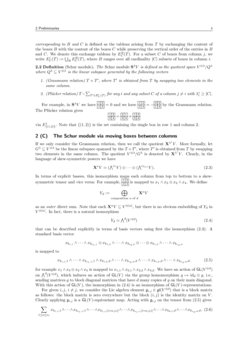 Young flattenings of polynomials are equivariant linear maps from a space of homogeneous polynomials to a space of matrices, where the row and column space are irreducible representations of GLn:=GL(Cn). One is usually interested in finding lower bounds for the rank of the image of a Young flattening, as it can be used to obtain lower bounds on the border Waring rank of a polynomial, and more generally for any border X-rank for a GLn-variety X, i.e., given a point p to find a lower bound on the smallest i such that p lies on the i-th secant variety of X, see e.g. [Lan15]. One early example are Sylvester’s catalecticants [Syl52]. Landsberg and Ottaviani [LO15]

use Young flattenings in the tensor setting. The name

If a Young diagram λ is contained in another Young diagram μ such that the column lengths of both diagrams differ by at most 1 in each column, then we have a unique nonzero equivariant map between SdV⊗SλV→SμV, where SλV, SμV, and SdV are irreducible polnomial GLn-representations, and d is the difference in the number of boxes of μ and λ. This is called the Pieri map, and it induces a linear map Fλ,μ:SdV→End(SλV,SμV). Since border Waring rank is subadditive, a lower bound on the border Waring rank of p is obtained by rounding up to quotient of ranks

where x is some variable that appears in p, and rank(.) is the usual rank of matrices.

There are several isomorphic constructions for the irreducible polynomial representations of the general linear group in characteristic zero. The two best known versions are called Schur modules and Weyl modules and they only differ in the order of the row-symmetrizer and the column-symmetrizer in their definition of the Young symmetrizer. This results in different bases for the irreducible representations. Sometimes results that are proved in one basis are reproved in the other basis, but the proofs look significantly different (see e.g. [BCI11] and [MM14]). In fact, so far some results are only provable in a natural way over one basis and not the other, see e.g. [Res20]. Based on an explicit paper by Olver over the Weyl module basis [Olv82] Steven Sam in 2009 implemented his Macaulay2 package PieriMaps [Sam08], which among other things can be used to compute the rank quotient (1.1), see Section 4 (A) below.

The papers [Far16] (in its Section 5111Although the description in the paper is wrong, the use of the software package is correct and gives the result claimed in the paper.) and [Oed16] (only in version 1) describe the PieriMaps package as if it would be working in the Schur module basis and they assume that the Young flattenings have an extremly simple combinatorial description. However, this is wrong (see Section 5 below), which led to a revision of [Oed16].

In this paper we work out the details of Young flattenings in the Schur module basis: We closely mimic the arguments in [Olv82], but we take care of subtle sign issues that are not present in Olver’s work over the Weyl module basis. We then make use of a recent fast algorithm (and implementation) by Reuven Hodges for Young tableau straightening in the Schur module basis [Hod17] to get a highly efficient Young flattening algorithm that outperforms Sam’s PieriMaps implementation by several orders of magnitude in many examples. We obtain the most impressive speedup factor of 1000 for flattening the power of a linear form, which is the denominator of (1.1).

A Young diagram λ whose entries are labeled with numbers is called a Young tableau of shape λ. For example,

is a Young tableau of shape (6,4,3). A Young tableau is called semistandard if the entries strictly increase in each column from top to bottom and do not decrease in each row from left to right. For example, centertableaux,notabloids 1113,23 is a semistandard tableau. We denote by Sλ the symmetric group on the set {(i,j)∣(i,j)∈λ} of positions in λ. The group Sλ acts on the set of all Young tableaux of shape λ by permuting the positions. We write σT for the permuted Young tableau, where λ is the shape of T and σ∈Sλ. For a subset S⊆λ of positions we write SS to denote the symmetric group that permutes only the positions in S among each other and fixes all other positions.

V and associate to every tensor factor V a position in λ. A rank 1 tensor v=v1⊗v2⊗⋯⊗v|λ| can now be represented by a Young diagram in whose i-th box we write the vector vi. If we fix a basis v1,…,vn of V, then a basis of V⊗λ is obtained by all ways of writing {v1,…,vn} into the boxes of λ, allowing repetitions. If the fixed basis is clear from the context, then we write i instead of vi into the boxes and obtain a Young tableau. The basis vector corresponding to the Young tableau T is also denoted by T when no confusion can arise, so for example if x=v1+v2 we can use the multilinearity of the tensor product to write

2 (A) The Weyl module basis

The Weyl module Wλ(V) is defined as the quotient space V⊗λ/Pλ, where Pλ⊆V⊗λ is the linear subspace generated by the following two types of vectors:

The Weyl modules for Young diagrams λ with at most dimV rows form a complete list of pairwise non-isomorphic irreducible polynomial representations of GL(V). In this paper we will not work with Weyl modules, but with the isomorphic Schur modules, which are defined in the following section.

2 (B) The Schur module basis

Let T be a Young tableau of shape λ. Let 1≤i<j≤λ1 be two column indices. Let B and C be two equally large sets of boxes, B from column i and C from column j. An exchange tableau of T corresponding to B and C is defined as the tableau arising from T by exchanging the content of the boxes B with the content of the boxes C while preserving the vertical order of the entries in B and C. We denote this exchange tableau by EBC(T). For a subset C of boxes from column j, we write EiC(T):=⋃BEBC(T), where B ranges over all cardinality |C| subsets of boxes in column i.

2 (C) The Schur module via moving boxes between columns

If we only consider the Grassmann relation, then we call the quotient Xλ∗V. More formally, let Gλ⊆V⊗λ be the linear subspace spanned by the T+T′, where T′ is obtained from T by swapping two elements in the same column. The quotient V⊗λ/Gλ is denoted by Xλ∗V

. Clearly, in the language of skew-symmetric powers we have

In terms of explicit basees, this isomorphism maps each column from top to bottom to a skew-symmetric tensor and vice versa: For example, \ytableausetupcentertableaux,notabloids\oldytableaushort12,34 is mapped to x1∧x3⊗x2∧x4. We define

as an outer direct sum. Note that each XαV⊆V⊗|α|, but there is no obvious embedding of Yd in V⊗|α|. In fact, there is a natural isomorphism

that can be described explicitly in terms of basis vectors using first the isomorphism (2.3): A standard basis vector

For given i,j, i≠j, we consider the Lie algebra element gi,j∈gl(V⊗d) that is a block matrix as follows: the block matrix is zero everywhere but the block (i,j)

is the identity matrix on

V. Clearly applying gi,j is a GL(V)-equivariant map. Acting with gi,j on the tensor from (2.5) gives

We denote by the map σi,j the application of gi,j. Using the canonical isomorphisms (2.4) and (2.3) we can write this more explicitly: For x∈Λαi, y∈Λαj, z∈Λαk have

Here for a tensor x∈⋀dV we define x−k as the tensor obtained by “removing the k-th tensor position” (this is only well-defined if a basis of V is fixed and an ordering of the basis vectors is fixed). For example, if x=e3∧e1∧e4∧e3, then x−3=e3∧e1∧e3, and x3=e4.

The relation between the basis vectors corresponding to semistandard tableaux in Prop. 2.9 is more involved than the straightforward relationship in Prop. 2.8.

are called Pieri inclusions and are unique up to scale by Schur’s lemma. We define φλ,μ by composing Pieri inclusions for d=1 as follows. For μ/λ∈HS let (λ=λ(0),λ(1),λ(2),…,λ(d)=μ) be the sequence of partitions obtained by adding one box at a time to λ from left to right, so that after having added d boxes we arrive at μ. Then define the GL(V)-equivariant map ψλ,μ:V⊗d⊗Sλ→Sμ via

By proving that the restriction of ψλ,μ to SdV⊗SλV is nonzero (see Lemma 3.10), it immediately follows that this restriction equals φλ,μ (up to a nonzero scalar). It remains to describe φλ,μ for which μ/λ has only a single box and then prove Lemma 3.10.

We assume that μ/λ consists of a single box.

We will define the linear map ζλ,μ:V⊗Xλ∗V→Xμ∗V, show its GL(V)-equivariance (Lemma 3.4), and then prove that it is well-defined on the quotient space V⊗SλV if we interpret its image in the quotient space SμV (Theorem 3.5). In this way, ζλ,μ induces a map φλ,μ:V⊗SλV→SμV. By the uniqueness of the Pieri inclusions we have that this map equals φλ,μ or is the zero map (nonzeroness is proved in Lemma 3.10). Note that V⊗Xλ∗V≃X(λ∗,1)V by definition.

Let J=(J1,…,Jp) be a finite sequence of positive integers. Define the linear map

Pictorially, this means that a box is shifted from column Jp−1 to Jp, then from Jp−2 to Jp−1, and so on. Clearly σJ is GL(V)-equivariant as the composition of GL(V)-equivariant maps. Note that if v∈X(λ∗,1)V and σJ moves a box from an empty column to another column, then σJ(v)=0.

We consider the set of all strongly decreasing sequences of natural numbers from m to k, which we denote by

For ι≥k let hk,ι:=λ∗k−λ∗ι+ι−k+1 be the hook length in λ of the box in column k and row ι. Let k be the column where μ and λ differ. We define DJ(λ∗) as the product of all hook lengths in J with respect to column k, i.e.,

Finally, we define ζμλ:Yd→Yd by

Let λ,μ be partitions with μ being obtained from λ by appending a single box in row k. Then ζμλ(V⊗Iλ)⊆Iμ and hence φλ,μ is well-defined.

Before proving Theorem 3.5 we first have to prove the following lemma.

We denote by [f,g]:=fg−gf the commutator of two linear maps f and g.

Note the similarity to Lemma 5.4 in [Olv82] with the exception that the sign in the first case is reversed. Moreover, [Olv82] ignores handling the special case when column lengths vanish. We handle these cases explicitly. If λ∗j=0, λ∗i≠0 and v∈Xλ∗, then

We focus on the key positions in the tensor.

We will make heavy use of the following identity: Let σ1,σ2,σ3 be linear maps, then

The rule can be interpreted as the Leibniz rule for adA(B)=[A,B].

We split the proof according to the different relations of i and k: