You May Not Need Order in Time Series Forecasting

Time series forecasting with limited data is a challenging yet critical task. While transformers have achieved outstanding performances in time series forecasting, they often require many training samples due to the large number of trainable parameters. In this paper, we propose a training technique for transformers that prepares the training windows through random sampling. As input time steps need not be consecutive, the number of distinct samples increases from linearly to combinatorially many. By breaking the temporal order, this technique also helps transformers to capture dependencies among time steps in finer granularity. We achieve competitive results compared to the state-of-the-art on real-world datasets. 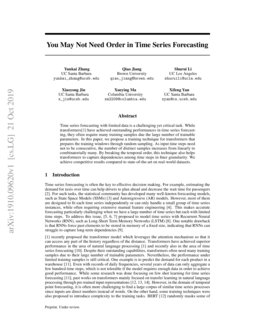 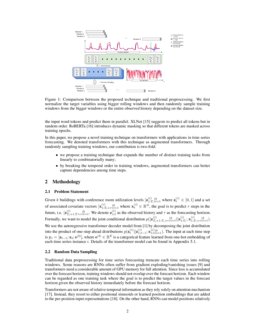 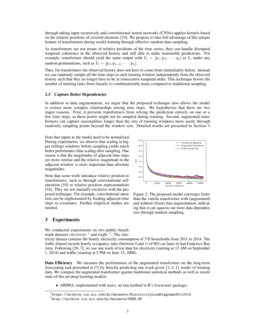 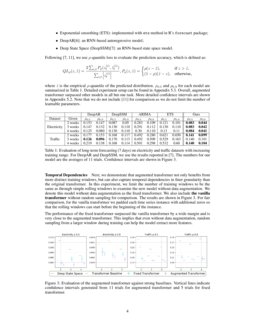 Transformers in Time Series: A Survey

In many cases, it is difficult to generate highly accurate models for ti...
Fan-Keng Sun, et al. ∙

Time series forecasting is often the key to effective decision making. For example, estimating the demand for taxis over time can help drivers to plan ahead and decrease the wait time for passengers

(Laptev et al., 2017). For such tasks, the statistical community has developed many well-known forecasting models, such as State Space Models (SSMs) (Snyder, 2008) and Autoregressive (AR) models. However, most of them are designed to fit each time series independently or can only handle a small group of time series instances, while often requiring extensive manual feature engineering (Harvey, 1991). This makes accurate forecasting particularly challenging when we have a large number of time series but each with limited time steps. To address this issue, (Graves, 2013; Flunkert et al., 2017; Rangapuram et al., 2018)

(Hochreiter and Schmidhuber, 1997). One notable drawback is that RNNs force past elements to be stored in memory of a fixed size, indicating that RNNs can struggle to capture long-term dependencies (Khandelwal et al., 2018).

recently proposed the transformer model which leverages the attention mechanism so that it can access any part of the history regardless of the distance. Transformers have achieved superior performance in the area of natural language processing

(Vaswani et al., 2017) and recently also in the area of time series forecasting (Li et al., 2019). Despite their outstanding capabilities, transformers often need many training samples due to their large number of trainable parameters. Nevertheless, the performance under limited training samples is still critical. One example is to predict the demand for each product in a warehouse (Maddix et al., 2018). Even with records of daily frequencies, several years of data can only aggregate a few hundred time steps, which is not tolerable if the model requires enough data in order to achieve good performance.

(Devlin et al., 2018; E. Peters et al., 2018; Houlsby et al., 2019). However, in the domain of temporal point forecasting, it is often more challenging to find a large corpus of similar time series processes since inputs are direct numbers instead of words. On the other hand, some training techniques were also proposed to introduce complexity to the training tasks. BERT (Devlin et al., 2018) randomly masks some of the input word tokens and predict them in parallel. XLNet (Yang et al., 2019) suggests to predict all tokens but in random order. RoBERTa (Liu et al., 2019)

introduces dynamic masking so that different tokens are masked across training epochs.

and a set of associated covariate vectors

We use the autoregressive transformer decoder model from (Vaswani et al., 2017)

Transformers are not aware of relative temporal information as they rely solely on attention mechanism (Lee et al., 2019). Instead, they resort to either positional sinusoids or learned position embeddings that are added to the per-position input representations (Shaw et al., 2018)

. On the other hand, RNNs can model positions relatively through taking input recursively and convolutional neural networks (CNNs) applies kernels based on the relative positions of covered elements

As transformers are not aware of relative positions of the time series, they can handle disrupted temporal coherence in the observed history and still able to make reasonable predictions. For example, transformer should yield the same output with Yt=[y1;y2;⋯;yt] as Yt under any random permutations, such as ^Yt=[y3;yt−5;⋯;y6].

Thus, for transformers the observed history does not have to come from immediately before. Instead, we can randomly sample all the time steps in each training window independently from the observed history such that they no longer have to be in consecutive temporal order. This technique boosts the number of training tasks from linearly to combinatorially many compared to traditional sampling.

In addition to data augmentation, we argue that the proposed technique also allows the model to extract more complex relationships among time steps. We hypothesize that there are two major reasons. First, it prevents transformers from relying the prediction entirely on one or a few time steps, as these points might not be sampled during training. Second, augmented transformers can capture seasonalities longer than the size of training windows more easily through randomly sampling points beyond the window size. Detailed results are presented in Section 3.

Note that inputs to the model need to be normalized. During experiments, we observe that scaling in bigger rollings windows before sampling yields much better performance than scaling after sampling. One reason is that the magnitudes of adjacent time steps are more similar and the relative magnitude in the adjacent window is more important than absolute magnitudes.

Note that some work introduce relative position to transformers, such as through convolutional self-attention (Li et al., 2019) or relative position representations (Shaw et al., 2018). They are not mutually exclusive with the proposed technique. For example, convolutional attention can be implemented by feeding adjacent time steps as covariates. Further empirical studies are needed.

We conducted experiments on two public benchmark datasets electricity 111https://archive.ics.uci.edu/ml/datasets/ElectricityLoadDiagrams20112014 and traffic 222http://archive.ics.uci.edu/ml/datasets/PEMS-SF. The electricity dataset contains the hourly electricity consumption of 370 households from 2011 to 2014. The traffic dataset records hourly occupancy rates (between 0 and 1) of 963 car lanes in San Francisco Bay Area. Following Yu et al. (2016); Rangapuram et al. (2018), we use one week of test data for electricity (starting at 12 AM on September 1, 2014) and traffic (starting at 5 PM on June 15, 2008).

We measure the performance of the augmented transformer on the long-term forecasting task presented in (Rangapuram et al., 2018) by directly predicting one week given {2,3,4}

-quantile loss to evaluate the prediction accuracy, which is defined as:

where ^z is the empirical ρ-quantile of the predicted distribution. ρ0.5 and ρ0.9 for each model are summarized in Table 1. Detailed experiment setup can be found in Appendix 5.3

. Overall, augmented transformer surpassed other models in all but one task. More detailed confidence intervals are shown in Appendix

5.2. Note that we do not include (Maddix et al., 2018) for comparison as we do not limit the number of learnable parameters.

Next, we demonstrate that augmented transformer not only benefits from more distinct training windows, but can also capture temporal dependencies in finer granularity than the original transformer. In this experiment, we limit the number of training windows to be the same as through simple rolling windows to examine the new model without data augmentation. We denote this model without data augmentation as the fixed transformer. We also include the vanilla transformer without random sampling for comparison. The results are shown in Figure 3

. For fair comparison, for the vanilla transformer we padded each time series instance with additional zeros so that the rolling windows can start before the beginning of the instance.

The performance of the fixed transformer surpassed the vanilla transformer by a wide margin and is very close to the augmented transformer. This implies that even without data augmentation, random sampling from a larger window during training can help the model extract more features.

We present a novel augmentation technique for transformers on time series forecasting by random sampling of the training windows. The proposed strategy is able to achieve competitive performance compared to strong baselines on real-world datasets. In addition to data augmentation, we also show that augmented transformer can better capture dependencies among time steps.

The model consists of stacked decoder blocks, where each block has a self-attention layer followed by a feedforward layer. The self-attention layer first transforms Yt=[y1;y2;⋯;yt] into H set of attention heads. Let WQh,WKh∈R(1+D+E)×dk and WVh∈R(1+D+E)×dv be learnable parameters, where h=1,⋯,H. Each attention head transforms Yt into query matrices Qh,t=YtWQh, key matrices Kh,t=YtWKh, and value matrices Vh,t=YtWVh. From each head, the scaled dot-product attention computes a vector output for every time step:

is an upper-triangular mask that prevents the current time step from accessing future information. The feedforward layer then takes the concatenated output from all attention heads and performs two layers of point-wise dense layers with a ReLu activation in the middle.

333Note that we included M in our implementation of augmented transformer, which might not be necessary as the input order is permuted. Additional details can be found in [20].

For each task, our time-based covariate vectors are hour of the day and day of the week. We do not tune hyperparameters heavily. All of the models (both transformer baseline and augmented transformer) use 8 attention heads and dropout of

We scale the time steps with the adjacent 192 time steps and randomly sample from the entire observed history. For large datasets, sampling from the entire observed history might lead to slower or no convergence. Thus, sampling smaller training windows from bigger rolling windows are recommended. Each training window is of size 192, where the last 24 is the forecast horizon. We do not sinusoidal positional embeddings and simply use direct time covariates for faster convergence. With positional embeddings the network achieves around the same accuracy.

Note that during inference, we use all the training data as observed history for the tasks presented as the observed history is limited. For validation set, we randomly sample 10% from the data before the forecast start time and use the rest as the training set. All models are trained on GTX 1080 Ti GPUs.