You May Not Need Attention

In NMT, how far can we get without attention and without separate encoding and decoding? To answer that question, we introduce a recurrent neural translation model that does not use attention and does not have a separate encoder and decoder. Our eager translation model is low-latency, writing target tokens as soon as it reads the first source token, and uses constant memory during decoding. It performs on par with the standard attention-based model of Bahdanau et al. (2014), and better on long sentences. 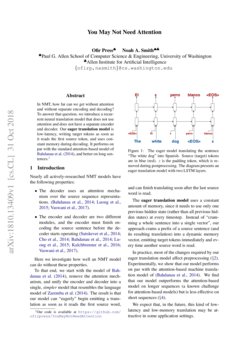 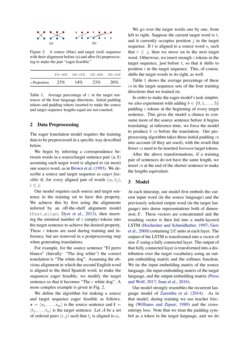 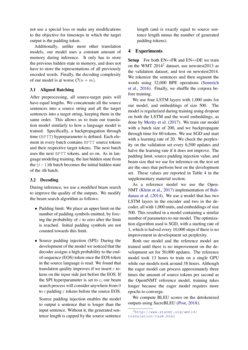 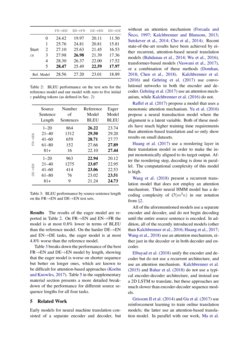 Nearly all actively-researched NMT models have the following properties:

Here we investigate how well an NMT model can do without these properties.

To that end, we start with the model of Bahdanau et al. (2014), remove the attention mechanism, and unify the encoder and decoder into a single, simpler model that resembles the language model of Zaremba et al. (2014). The result is that our model can “eagerly” begin emitting a translation as soon as it reads the first source word, and can finish translating soon after the last source word is read.

uses a constant amount of memory, since it needs to use only one previous hidden state (rather than all previous hidden states) at every timestep. Instead of “cramming a whole sentence into a single vector”, our approach crams a prefix of a source sentence (and its resulting translation) into a dynamic memory vector, emitting target tokens immediately and every time another source word is read.

We expect that, in the future, this kind of low-latency and low-memory translation may be attractive in some application settings.

The eager translation model requires the training data to be preprocessed in a specific way described below.

We begin by inferring a correspondence between words in a source/target sentence pair (s,t) assuming each target word is aligned to (at most) one source word, as in Brown et al. (1993). We describe a source and target sequence as eager feasible if, for every aligned pair of words (si,tj), i≤j.

Our model requires each source and target sentence in the training set to have this property. We achieve this by first using the alignments inferred by an off-the-shelf alignment model (fast_align; Dyer et al., 2013), then inserting the minimal number of ε (empty) tokens into the target sentence to achieve the desired property. These ε tokens are used during training and inference, but are removed in a postprocessing step when generating translations.

For example, for the source sentence “El perro blanco” (literally: “The dog white”) the correct translation is “The white dog”. Assuming the obvious alignment in which the second English word is aligned to the third Spanish word, to make the sequences eager feasible, we modify the target sentence so that it becomes “The ε white dog”. A more complex example is given in Fig. 2.

We define the algorithm for making a source and target sequence eager feasible as follows. s=⟨s1,…,sm⟩ is the source sentence and t=⟨t1,…,tn⟩ is the target sentence. Let A

be a set of ordered pairs

Table 1 shows the average percentage of these εs in the target sequence sets of the four training directions that we trained on.

In order to make the eager model’s task simpler, we also experiment with adding b∈{0,1,…,5} padding ε tokens at the beginning of every target sentence. This gives the model a chance to consume more of the source sentence before it begins translating; at inference time, we force the model to produce b εs before the translation. Our preprocessing algorithm takes these initial padding εs into account (if they are used), with the result that fewer εs need to be inserted between target tokens.

After the above transformations, if a training pair of sentences do not have the same length, we insert εs at the end of the shorter sentence to make the lengths equivalent.

At each timestep, our model first embeds the current input word (in the source language) and the previously selected output word (in the target language) into dense representations both of dimension E. These vectors are concatenated and the resulting vector is then fed into a multi-layered LSTM Hochreiter and Schmidhuber (1997); Gers et al. (2000) containing 2E units at each layer. The output of the LSTM is transformed into a vector of size E using a fully connected layer. The output of that fully connected layer is transformed into a distribution over the target vocabulary using an output embedding matrix and the softmax function. We tie the input embedding matrix of the source language, the input embedding matrix of the target language, and the output embedding matrix Press and Wolf (2017); Inan et al. (2016).

Our model strongly resembles the recurrent language model of Zaremba et al. (2014). As in that model, during training we use teacher forcing Williams and Zipser (1989)

and the cross-entropy loss. Note that we treat the padding symbol as a token in the target language, and we do not use a special loss or make any modifications to the objective for timesteps in which the target output is the padding token.

Additionally, unlike most other translation models, our model uses a constant amount of memory during inference. It only has to store the previous hidden state in memory, and does not have to store the representations of all previously encoded words. Finally, the decoding complexity of our model is at worse O(n+m).

After preprocessing, all source-target pairs will have equal lengths. We concatenate all the source sentences into a source string and all the target sentences into a target string, keeping them in the same order. This allows us to train our translation model similarly to how a language model is trained. Specifically, a backpropagation through time (

) hyperparameter is defined. Each element in every batch contains

BPTT source tokens and their respective target tokens. The next batch uses the next BPTT tokens, and so on. As in language modeling training, the last hidden state from the (i−1)th batch becomes the initial hidden state of the ith batch.

During inference, we use a modified beam search to improve the quality of the outputs. We modify the beam search algorithm as follows:

For both EN↔FR and EN↔DE we train on the WMT 2014222http://www.statmt.org/wmt14/translation-task.html dataset, use newstest2013 as the validation dataset, and test on newstest2014. We tokenize the sentences and then segment the words using 32,000 BPE operations Sennrich et al. (2016). Finally, we shuffle the corpora before training.

We use four LSTM layers with 1,000 units for our model, and embeddings of size 500. The model is regularized during training using dropout on both the LSTM and the word embeddings, as done by Merity et al. (2017). We train our model with a batch size of 200, and we backpropagate through time for 60 tokens. We use SGD and start with a learning rate of 20. We check the perplexity on the validation set every 6,500 updates and halve the learning rate if it does not improve. The padding limit, source padding injection value, and beam size that we use for inference on the test set are the ones that perform best on the development set. These values are reported in Table 4 in the supplementary material section.

As a reference model we use the OpenNMT Klein et al. (2017) implementation of Bahdanau et al. (2014). We use a model that has two LSTM layers in the encoder and two in the decoder, all with 1,000 units, and embeddings of size 500. This resulted in a model containing a similar number of parameters to our model. The optimization algorithm used is SGD, with a starting rate of 1, which is halved every 10,000 steps if there is no improvement in development set perplexity.

Table 3 breaks down the performance of the best FR→EN and DE→EN model by length, showing that the eager model is worse on shorter sequence but better on longer ones, which are known to be difficult for attention-based approaches Koehn and Knowles (2017). Table 5 in the supplementary material section presents a more detailed breakdown of the performance for different source sequence lengths for all four tasks.

Early models for neural machine translation consisted of a separate encoder and decoder, but without an attention mechanism

Raffel et al. (2017) propose a model that uses a monotonic attention mechanism. Yu et al. (2016) propose a neural transduction model where the alignment is a latent variable. Both of these models have much higher training time requirements than attention-based translation and so only show results on small datasets.

Huang et al. (2017) use a reordering layer in their translation model in order to make the input monotonically aligned to its target output. After the reordering step, decoding is done in parallel. The computational complexity of this model is high.

Wang et al. (2018) present a recurrent translation model that does not employ an attention mechanism. Their neural HMM model has a decoding complexity of O(m2n) in our notation from §2.

All of the aforementioned models use a separate encoder and decoder, and do not begin decoding until the entire source sentence is encoded. In addition, all of the recently introduced models (other than Kalchbrenner et al., 2016; Huang et al., 2017; Wang et al., 2018) use an attention mechanism, either just in the decoder or in both decoder and encoder.

For morphological inflection generation, Aharoni and Goldberg (2017) use an alignment model on the training data in order to know when to train the model to output a symbol and when it should read more of the source sequence, similar to our eager feasibility preprocessing.

We introduce a simple translation model that doesn’t use attention and resembles a recurrent language model, and show that it preforms on par with a conventional attention model.