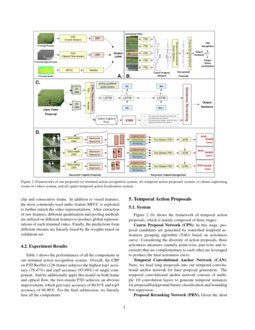 Recognizing activities in videos is a challenging task as video is an information-intensive media with complex variations. In particular, an activity may be represented by different clues including frame, short video clip, motion (optical flow) and long video clip. In this work, we aim at investigating these multiple clues to activity classification in trimmed videos, which consist of a diverse range of human focused actions.

In addition to the above four tasks tailored to activity which is usually the name of action/event in videos, the task of dense-captioning events in videos is explored here which goes beyond activities by describing numerous events within untrimmed videos with multiple natural sentences.

The remaining sections are organized as follows. Section 2 presents all the features which will be adopted in our systems, while Section 3 details the feature quantization strategies. Then the descriptions and empirical evaluations of our systems for five tasks are provided in Section 4-8 respectively, followed by the conclusions in Section 9.

We extract the video representations from multiple clues including frame, short clip, motion and long clip.

Frame. To extract frame-level representations from video, we uniformly sample 25 frames for each video/proposal, and then use pre-trained 2D CNNs as frame-level feature extractors. We choose the most popular 2D CNNs in image classification—ResNet [4].

Short Clip. In addition to frame, we take the inspiration from the most popular 3D CNN architecture C3D [20] and devise a novel Pseudo-3D Residual Net (P3D ResNet) architecture [16] to learn spatio-temporal video clip representation in deep networks. Particularly, we develop variants of bottleneck building blocks to combine 2D spatial and 1D temporal convolutions, as shown in Figure 1. The whole P3D ResNet is then constructed by integrating Pseudo-3D blocks into a residual learning framework at different placements. We fix the sample rate as 25 per video.

Audio. Audio feature is the most global feature (though entire video) in our system. Although audio feature itself can not get very good result for action recognition, but it can be seen as powerful additional feature, since some specific actions are highly related to audio information. Here we utilize MFCC to extract audio features.

In this section, we describe two quantization methods to generate video-level/clip-level representations.

Average Pooling. Average pooling is the most common method to extract video-level features from consecutive frames, short clips and long clips. For a set of frame-level or clip-level features F={f1,f2,...,fN}, the video-level representations are produced by simply averaging all the features in the set:

where Rpooling denotes the final representations.

where S=W×H is the size of the feature map, Ft,j is the region-level feature of j-th spatial location in Ft, ϕ(⋅) is a low dimensional projection function, and ⟨⋅⟩ is the second order polynomial kernel.

Our trimmed action recognition framework is shown in Figure 2

[6, 13, 14, 15], which represented input video by a hierarchical structure including individual frame, short clip and consecutive frame. In addition to visual features, the most commonly used audio feature MFCC is exploited to further enrich the video representations. After extraction of raw features, different quantization and pooling methods are utilized on different features to produce global representations of each trimmed video. Finally, the predictions from different streams are linearly fused by the weights tuned on validatoin set.

Table 1 shows the performances of all the components in our trimmed action recognition system. Overall, the CBP on P3D ResNet (128-frame) achieves the highest top1 accuracy (78.47%) and top5 accuracy (93.99%) of single component. And by additionally apply this model on both frame and optical flow, the two-stream P3D achieves an abvious improvement, which gets top1 accuracy of 80.91% and top5 accuracy of 94.96%. For the final submission, we linearly fuse all the components.

Figure 2 (b) shows the framework of temporal action proposals, which is mainly composed of three stages:

Coarse Proposal Network (CPN). In this stage, proposal candidates are generated by watershed temporal actionness grouping algorithm (TAG) based on actionness curve. Considering the diversity of action proposals, three actionness measures (namely point-wise, pair-wise and recurrent) that are complementary to each other are leveraged to produce the final actionness curve.

Proposal Reranking Network (PRN). Given the short proposals from the coarse stage and fine-grained proposals from the temporal convolutional anchor network, a reranking network is utilized for proposal refinement. To take video temporal structures into account, we extend the current part of proposal with its’ start and end part. The duration of start and end parts are half of the current part. The proposal is then represented by concatenating features of each part to leverage the context information. In our experiments, the top 100 proposals are finally outputted.

Table 2 shows the action proposal AUC performances of frame/optical flow input to P3D [16] with different stages in our system. The two stream P3D architecture is pre-trained on Kinetics [5]

dataset. For all the single stream runs with different stages, the setting based on all three stages combination achieves the highest AUC. For the final submission, we combine all the proposals from the two streams and then select the top 100 proposals based on their weighted ranking probabilities. The linear fusion weights are tuned on validation set.

Without loss of generality, we follow the standard “detection by classification” framework, i.e., first generate proposals by temporal action proposals system and then classify proposals. The action classifier is trained with the above trimmed action recognition system (i.e., two-stream P3D) over the 200 categories on ActivityNet dataset [1].

The main goal of dense-captioning events in videos is jointly localizing temporal proposals of interest in videos and then generating the descriptions for each proposal/video clip. Hence we firstly leverage the temporal action proposal system described above in Section 5 to localize temporal proposals of events in videos (2 proposals for each video). Then, given each temporal proposal (i.e., video segment describing one event), our dense-captioning system runs two different video captioning modules in parallel—the generative module for generating caption via the LSTM-based sequence learning model, and the retrieval module which can directly copy sentences from other visually similar video segments through KNN. Specifically, the generative module with LSTM is inspired from the recent successes of probabilistic sequence models leveraged in vision and language tasks (e.g., image captioning

[18] to boost the video captioning performances specific to METEOR metric. For the retrieval module, we utilize KNN to find the visually similar video segments based on the extracted video representations. The captions associated with the top similar video segments are regarded as sentence candidates in retrieval module. In the experiment, we mainly choose the top 300 nearest neighbors for generating sentence candidates. Finally, a sentence re-ranking module is exploited to rank and select the final most consensus caption from the two parallel video captioning modules by considering the lexical similarity among all the sentence candidates. The overall architecture of our dense-captioning system is shown in Figure 2 (c).

Table 4 shows the performances of our proposed dense-captioning events in videos system. Here we compare three variants derived from our proposed model. In particular, by additionally incorporating the policy gradient optimization scheme into the basic LSTM-A3 architecture, we can clearly observe the performance boost in METEOR. Moreover, our dense-captioning model (LSTM-A3 + policy gradient + retrieval) is further improved by injecting the sentence candidates from retrieval module in METEOR.

Recurrent Tubelet Proposal (RTP) networks. The Recurrent Tubelet Proposal networks produces action proposals in a recurrent manner. Specifically, it initializes action proposals of the start frame through a Region Proposal Network (RPN) [17] on the feature map. Then the movement of each proposal in the next frame is estimated from three inputs: feature maps of both current and next frames, and the proposal in current frame. Simultaneously, a sibling proposal classifier is utilized to infer the actionness of the proposal. To form the tubelet proposals, action proposals in two consecutive frames are linked by taking both their actionness and overlap ratio into account, followed by the temporal trimming on tubelet.

Recurrent Tubelet Recognition (RTR) networks. The Recurrent Tubelet Recognition networks capitalizes on a multi-channel architecture for tubelet proposal recognition. For each proposal, we extract three different semantic-level features, i.e., the features on proposal-cropped image, the features with RoI pooling on the proposal, and the features on whole frame. These features implicitly encode the spatial context and scene information, which could enhance the recognition capability on specific categories. After that, each of them is fed into a LSTM to model the temporal dynamics for tubelet recognition.

We construct our RTP based on [2], which is mainly trained with the single RGB frames. For RTR, we extract the region representations with RoI pooling from multiple clues including frame, clip and motion. Table 5 shows the performances of all the components in our RTR. Overall, the P3D ResNet trained on clips (128 frames) achieves the highest frame-mAP (19.40%) of single component. For the final submission, all the components are linearly fused using the weights tuned on validation set. The final mAP on validation set is 22.20%.