The performance of wake-up radios must be clearly measured and understood while designing and developing robust, dependable, and affordable systems, considering both benefits and shortcomings. State-of-the-art WURs display significant diversity in their architecture, processing capability, energy consumption, and receiver sensitivity. Standard methodologies for benchmarking are crucial for quantitatively evaluating the performance of this emerging technology, however, currently, no accepted standard for such quantitative measurement exists. Further, there is no consensus on what objective evaluation procedures and metrics should be used to understand the performance of whole systems exploiting this technology. This lack of standardization has prevented researchers from comparing results and leveraging previous work that could otherwise avoid duplication and speed up the validation process. This paper leads toward an evaluation framework, a benchmark, to enable accurate and repeatable profiling of WUR-based systems, leading to more consistent and therefore comparable evaluations for current and future systems. 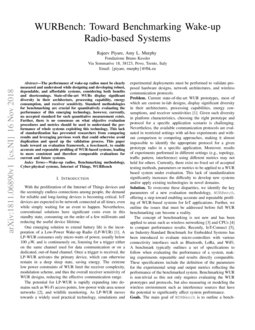 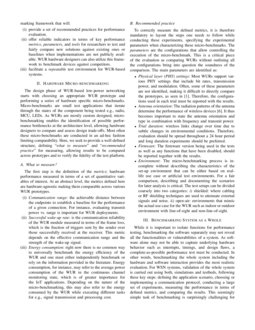 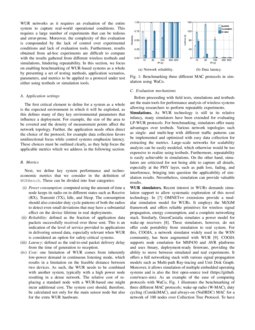 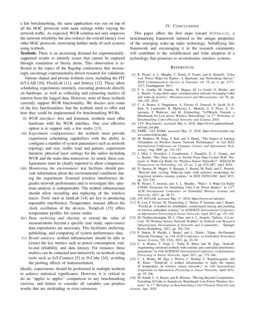 With the proliferation of the Internet of Things devices and the seemingly endless connections among people, the demand for reliable and long-lasting devices is becoming critical. IoT devices are expected to be network connected at all times, even while simply waiting for an event to happen. Nevertheless, conventional solutions have significant costs even in this standby state, consuming on the order of a few milliwatts and reducing the useful device lifetime.

One emerging solution to extend battery life is the incorporation of a Low-Power Wake-up Radio (LP-WUR) [1]. A LP-WUR consumes only micro-watts of power, usually below 100 μW, and is continuously on, listening for a trigger either on the same channel used for data communication or on a dedicated, out-of-band channel. Once a trigger is received, the LP-WUR activates the primary device, which can otherwise remain in a deep sleep state, saving energy. The extreme low power constraints of WUR limit the receiver complexity, modulation scheme, and thus the overall receiver sensitivity of WUR designs, reducing the effective communication range.

The potential for LP-WUR is rapidly expanding into domains such as Wi-Fi access points, low-power wide area sensor networks [2], and wildlife monitoring. As LP-WUR moves towards a widely used practical technology, simulations and experimental deployments must be performed to validate proposed hardware designs, network architectures, and wireless communication protocols.

Problem. Current state-of-the-art WUR prototypes, most of which are custom in-lab designs, display significant diversity in their architectures, processing capabilities, energy consumptions, and receiver sensitivities [1]. Given such diversity in platform characteristics, choosing the right prototype and protocol for a specific application scenario is challenging. Nevertheless, the available communication protocols are evaluated in restricted settings with ad-hoc experiments and without comparison to competing approaches, making it almost impossible to identify the appropriate protocol for a given prototype radio in a specific application. Moreover, results of experiments performed in different settings (e.g., topology, traffic pattern, interference) using different metrics may not hold for others. Currently, there exist no fixed set of accepted testing methods, parameters or metrics to be applied to a WUR based system under evaluation. This lack of standardization significantly increases the difficulty to develop new systems and/or apply existing technologies in novel domains.

Solution. To overcome these disparities, we identify the key parameters of a new evaluation methodology, WURBench, offering a step toward enabling accurate and repeatable profiling of WUR-based systems for IoT applications. Further, we outline the issues that must be addressed before full WUR benchmarking can become a reality.

The concept of benchmarking is not new and has been applied to areas such as wireless networking [3] and CPUs [4] to compare performance results. Recently, IoT-Connect [5], an Industry-Standard Benchmark for Embedded Systems has been introduced to evaluate micro-controllers with various connectivity interfaces such as Bluetooth, LoRa, and WiFi. A benchmark typically outlines a set of specifications to follow when evaluating the performance of a system, making experiments repeatable and results directly comparable. These specifications include the definition of the parameters for the experimental setup and output metrics reflecting the performance of the benchmarked system. Benchmarking WUR is non-trivial as this not only requires evaluating the WUR prototypes and protocols, but also measuring or modeling the wireless environment such as interference sources that have the potential to significantly affect system performance.

Goals. The main goal of WURBench is to outline a benchmarking framework that will:

The design phase of WUR-based low-power networking starts with choosing an appropriate WUR prototype and performing a series of hardware specific micro-benchmarks. Micro-benchmarks are small test applications that iterate through the states of the component being tested e.g., radio, MCU, LEDs. As WURs are mostly custom designed, micro-benchmarking enables the identification of possible performance bottlenecks at the architecture level, allowing hardware designers to compare and assess design trade-offs. Most often these micro-benchmarks are conducted in an ad-hoc fashion limiting comparability. Here, we seek to provide a well-defined structure, defining “what to measure” and “recommended practice” for measuring, allowing results to be compared across prototypes and to verify the fidelity of the test platform.

Ii-a What to measure?

The first step is the definition of the metrics; hardware performance measured in terms of a set of quantitative variables of interest. At an abstract level, the metrics defined here are hardware-agnostic making them comparable across various WUR prototypes.

To correctly measure the defined metrics, it is therefore mandatory to layout the steps one needs to follow while conducting these experiments, specifying the experimental parameters when characterizing these micro-benchmarks. The parameters are the configurations that allow controlling the execution of the micro-benchmark. This is a critical piece of the evaluation as comparing WURs without outlining all the configurations bring into question the soundness of the comparison. The main parameters are identified as:

Iii Benchmarking System as a Whole

While it is important to isolate functions for performance testing, benchmarking the software separately may not reveal all the functionalities or vulnerabilities of a system. As software alone may not be able to capture underlying hardware behavior such as interrupts, timings, and design flaws, a complete-as-possible performance test must be conducted. In other words, benchmarking the whole system including the hardware and software interaction provides the most realistic evaluation. For WSN systems, validation of the whole system is carried out using both, simulations and testbeds, following these key steps: defining the application scenario, choosing or implementing a communication protocol, conducting a large set of experiments, measuring the performance in terms of defined metrics, and comparing the results. This seemingly simple task of benchmarking is surprisingly challenging for WUR networks as it requires an evaluation of the entire system to capture real-world operational conditions. This requires a large number of experiments that can be tedious and error-prone. Moreover, the complexity of this evaluation is compounded by the lack of control over experimental conditions and lack of evaluation tools. Furthermore, results obtained from ad-hoc experiments are difficult to compare with the results gathered from different wireless testbeds and simulations, hindering repeatability. In this section, we focus on enabling benchmarking of WUR-based systems as a whole by presenting a set of testing methods, application scenarios, parameters, and metrics to be applied to a protocol under test either using testbeds or simulation tools.

The first critical element to define for a system as a whole is the expected environment in which it will be exploited, as this defines many of they key environmental parameters that influence a deployment. For example, the size of the area to be covered and the density of measurement points affect the network topology. Further, the application needs often direct the choice of the protocol, for example data collection favors unidirectional focus while control systems emphasize latency. These choices must be outlined clearly, as they help focus the applicable metrics which we address in the following section.

Next, we define key system performance and techno-economic metrics that we consider in the definition of WURBench. These can be divided into four categories:

Before proceeding with field tests, simulations and testbeds are the main tools for performance analysis of wireless systems allowing researchers to perform repeatable experiments.

Simulations. As WUR technology is still in its relative infancy, many simulators have been extended for evaluating LP-WUR protocols. For benchmarking, simulators offer many advantages over testbeds. Various network topologies such as single- and multi-hop with different traffic patterns can be implemented and optimized with easy data collection for extracting the metrics. Large-scale networks for scalability analysis can be easily modeled, which otherwise would be too expensive to realize using testbeds. Furthermore, repeatability is easily achievable in simulations. On the other hand, simulators are criticized for not being able to capture all details, especially at the PHY layer, such as path loss, fading, and interference, bringing into question the applicability of simulation results. Nevertheless, simulation can provide valuable results.

WUR simulators. Recent interest in WURs demands simulation support to allow systematic exploration of this novel technology. In [7] OMNET++ extensions provide a modular simulation model for WURs. It employs the MiXiM framework and offers reliable primitives for wireless signal propagation, energy consumption, and a complete networking stack. Similarly, GreenCastalia simulates a power model for wake-up receivers [8]. These simulators, however, do not offer code portability from simulation to real system. For this, COOJA, a network simulator widely used in the WSN community, has been augmented with WUR [9]. COOJA supports node emulation for MSP430 and AVR platforms and uses binary, deployment-ready firmware, providing the ability to move between simulated and real experiments. It offers a full networking stack with various signal propagation models such as Multi-path Ray-tracing and Unit Disk Graph. Moreover, it allows simulation of multiple embedded operating systems and is also the first open-source tool (https://github.com/waco-sim). As an example of the ease of comparing protocols with WaCo, Fig. 1 illustrates the benchmarking of three different MAC protocols; wake-up radio (W-MAC), duty cycling (ContikiMAC), and always-on (NullRDC) MAC for a network of 100 nodes over Collection Tree Protocol. To have a fair benchmarking, the same application was run on top of all the MAC protocols with same settings while varying the network traffic. As expected, WUR solution not only improves the network reliability but also reduces the overall latency over other MAC protocols, motivating further study of such systems using testbeds.

Testbeds. There is an increasing demand for experimentally-supported results to identify issues that cannot be captured through simulation or theory alone. This observation is reflected in the topics of the flagship conferences that increasingly encourage experimentally-driven research for validation.

Various shared and private testbeds exist, including the FIT IoT-LAB [10], FlockLab [11], and Indriya [12]. These allow scheduling experiments remotely, executing protocols directly on hardware, as well as collecting and extracting metrics of interest from the logged data. However, none of these testbeds currently support WUR functionality. We discuss next some of the key functionalities that the testbeds need to offer and how they could be implemented for benchmarking WURs.

Ideally, experiments should be performed in multiple testbeds to achieve statistical significance. However, it is critical to do an “apples to apples” comparison in any benchmarking exercise, and failure to consider all variables can produce results that are misleading or even erroneous.

This paper offers the first steps toward WURBench, a benchmarking framework tailored to the unique properties of the emerging wake-up radio technology. Solidifying this framework and encouraging it in the research community will contribute to the solidification and wide adoption of a technology that promises to revolutionize wireless systems.