We propose weakly supervised language localization networks (WSLLN) to detect events in long, untrimmed videos given language queries. To learn the correspondence between visual segments and texts, most previous methods require temporal coordinates (start and end times) of events for training, which leads to high costs of annotation. WSLLN relieves the annotation burden by training with only video-sentence pairs without accessing to temporal locations of events. With a simple end-to-end structure, WSLLN measures segment-text consistency and conducts segment selection (conditioned on the text) simultaneously. Results from both are merged and optimized as a video-sentence matching problem. Experiments on ActivityNet Captions and DiDeMo demonstrate that WSLLN achieves state-of-the-art performance. 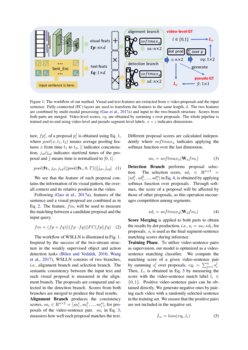 We propose Weakly Supervised Language Localization Networks (WSLLN) which requires only video-sentence pairs during training with no information of where the activities temporally occur. Intuitively, it is much easier to annotate video-level descriptions than segment-level descriptions. Moreover, when combined with text-based video retrieval techniques, video-sentence pairs may be obtained with minimum human intervention. The proposed model is simple and clean, and can be trained end-to-end in a single stage. We validate our model on ActivityNet Captions and DiDeMo. The results show that our model achieves the state-of-the-art of the weakly supervised approach and has comparable performance as some supervised approaches.

Following the setting of its strongly supervised counterpart Gao et al. (2017a); Hendricks et al. (2017), the goal of a weakly supervised language localization (WSLL) method is to localize the event that is described by a sentence query in a long, untrimmed video. Formally, given a video consisting of a sequence of image frames, Vi=[I1i,I2i,...,ITi], and a text query Qi, the model aims to localize a temporal segment, [Isti,...,Iedi], which semantically aligns best with the query. st and ed indicate the start and end times, respectively. The difference is that WSLL methods only utilize video-sentence pairs, {Vi,Qi}Ni=1, for training, while supervised approaches have access to the start and end times of the queries.

Taking frame sequences, [I1i,I2i,...,ITi], as inputs, the model first generates a set of temporal proposals, {p1i,p2i,...,pni}, where pji consists of temporally-continuous image frames. Then, the method aligns the proposals with the input query and outputs scores for proposals, {s1i,s2i,...,sni}, indicating their likelihood of containing the event.

Feature Description. Given a sentence query Qi of arbitrary length, sentence encoders can be used to extract text feature, fqi, from the query. For a video, Vi=[I1i,I2i,...,ITi], features, fvi=[fv1i,fv2i,...,fvTi], are extracted from each frame. Following Hendricks et al. (2017), the visual feature, fpji, of a proposal pji is obtained using Eq. 1, where pool(x,t1,t2) means average pooling features x from time t1 to t2, || indicates concatenation, jst/jed indicates start/end times of the proposal and ¯j means time is normalized to [0,1].

We see that the feature of each proposal contains the information of its visual pattern, the overall context and its relative position in the video.

Following Gao et al. (2017a), features of the sentence and a visual proposal are combined as in Eq. 2. The feature, fm, will be used to measure the matching between a candidate proposal and the input query.

The workflow of WSLLN is illustrated in Fig. 1. Inspired by the success of the two-stream structure in the weakly supervised object and action detection tasks Bilen and Vedaldi (2016); Wang et al. (2017), WSLLN consists of two branches, i.e., alignment branch and selection branch. The semantic consistency between the input text and each visual proposal is measured in the alignment branch. The proposals are compared and selected in the detection branch. Scores from both branches are merged to produce the final results.

Alignment Branch produces the consistency scores, sai∈Rn×2=[sa1i,sa2i,...,sani], for proposals of the video-sentence pair. sai in Eq. 3, measures how well each proposal matches the text. Different proposal scores are calculated independently where softmaxa indicates applying the softmax function over the last dimension.

Detection Branch performs proposal selection. The selection score, sdi∈Rn×2=[sd1i,sd2i,...,sdni] in Eq. 4, is obtained by applying softmax function over proposals. Through softmax, the score of a proposal will be affected by those of other proposals, so this operation encourages competition among segments.

Score Merging is applied to both parts to obtain the results by dot production, i.e., si=sai⋅sdi, for proposals. si is used as the final segment-sentence matching scores during inference.

sji over proposals, vqi=∑nj=1sji. Then, Lv is obtained in Eq. 5 by measuring the score with the video-sentence match label li∈{0,1}. Positive video-sentence pairs can be obtained directly. We generate negative ones by pairing each video with a randomly selected sentence in the training set. We ensure that the positive pairs are not included in the negative set.

Results can be further refined by adding an auxiliary task Lr in Eq. 6 where ^yi={0,1,...,n−1} indicates the index of the segment that best matches the sentence during training. The real segment-level labels are not available, thus we generate pseudo labels by setting ^yi=argmaxjsji[:,1]. This loss further encourages competition among proposals.

The overall objective is minimizing L in Eq. 7, where λ is a balancing scalar. loss is cross-entropy loss.

Evaluation Metrics. Following Gao et al. (2017a); Hendricks et al. (2017), R@k,IoU=th and mIoU are used for evaluation. Proposals are ranked according to their matching scores with the input sentence. If the temporal IoU between at least one of the top-k proposals and the groundtruth is bigger or equal to th, the sentence is counted as matched. R@k,IoU=th means the percentage of matched sentences over the total sentences given k and th. mIoU is the mean IoU between the top-1 proposal and the groundtruth.

Dataset Description. ActivityNet Captions Krishna et al. (2017) is a large-scale dataset of human activities. It contains 20k videos including 100k video-sentences in total. We train our models on the training set and test them on the validation set. Although the dataset provides segment-level annotation, we only use video-sentence pairs during training.

Effect of Sentence Encoder. WSDEC-W uses GRU Cho et al. (2014) as its sentence encoder, while our method uses BERT. It seems an unfair comparison, since BERT is powerful than GRU in general. However, we uses pretrained BERT model without fine tuning on our dataset, while WSDEC-W uses GRU but performed an end-to-end training. So, it is unclear which setting is better. To resolve this concern, we replace our BERT with GRU following WSDEC-W. The R@1 results when IoU is set to be 0.1, 0.3 and 0.5 are 74.0, 42.3 and 22.5, respectively. The mIoU is 31.8. It shows that our model with GRU has comparable results as that with BERT.

Effect of Two-branch Design. We create two baselines, ie, Align-only and Detect-only, to demonstrate the effectiveness of our design. To perform fair comparison, both of them are trained using only video-sentence pairs.

Align-only contains only the alignment branch. For positive video sentence pair, we give positive labels to all proposals. Negative pairs have negative labels for all the proposals. Loss is calculated between proposal scores and the generated segment-level labels.

Detect-only contains only the detection branch. Loss is calculated using the highest detection score over proposals and the video-level label at each training iteration.

Comparison results are displayed in Tab. 3. It shows that the two baselines underperform WSLLN by a large margin, which demonstrates the effectiveness of our design.

Dataset Description. DiDeMo was proposed in Hendricks et al. (2017) for the language localization task. It contains 10k, 30-second videos including 40k annotated segment-sentence pairs. Our models are trained using video-sentence pairs in the train set and tested on the test set.

Comparison Results are shown in Tab. 4. WSLLN performs better than LOR in terms of R@1/5. We also observe that the gap between our method and the supervised NLL model is much larger on DiDeMo than on ActivityNet Captions. This may be due to the fact that DiDeMo

is a much smaller dataset which is a disadvantage for weakly supervised learning.

We propose WSLLN– a simple language localization network. Unlike most existing methods which require segment-level supervision, our method is optimized using video-sentence pairs. WSLLN is based on a two-branch architecture where one branch performs segment-sentence alignment and the other one conducts segment selection. Experiments show that WSLLN achieves promising results on ActivityNet Captions and DiDeMo.