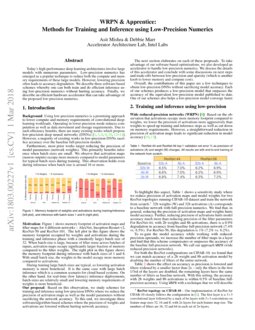 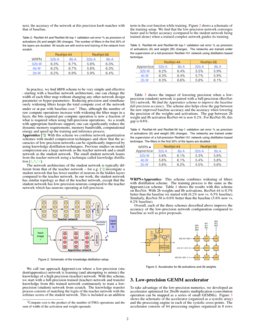 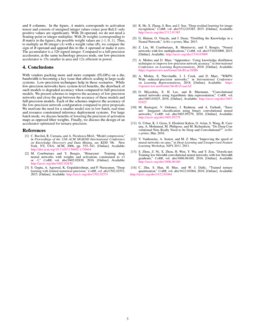 : Using low-precision numerics is a promising approach to lower compute and memory requirements of convolutional deep-learning workloads. Operating in lower precision mode reduces computation as well as data movement and storage requirements. Due to such efficiency benefits, there are many existing works which propose low-precision deep neural networks (DNNs)

Motivation: Figure 1 shows memory footprint of activation maps and filter maps for 4 different networks – AlexNet, Inception-Resnet-v2, ResNet-50 and ResNet-101. The left plot in this figure shows the memory footprint occupied by weights and activations during the training and inference phase with a (modestly large) batch size of 32. When batch-size is large, because of filter reuse across batches of inputs, activation maps occupy significantly larger fraction of memory compared to the filter weights. The right plot in this figure shows the memory footprint during inference with batch sizes of 1 and 8. With small batch size, the weights in the model occupy more memory compared to activations.

The next section elaborates on each of these proposals. To take advantage of our software-based optimizations, we also developed an accelerator to handle low-precision numerics. We discuss the details of this accelerator and conclude with some discussions on next steps and trade-offs between low-precision and sparsity (which is another knob to lower memory and compute cost).

To highlight this aspect, Table 1 shows a sensitivity study where we reduce precision of activation maps and model weights for two ResNet topologies running CIFAR-10 dataset and train the network from scratch.111 ResNet topology on CIFAR-10 – Our implementation of ResNet for CIFAR-10 closely follows the configuration in [4]. The first layer is a 3×3 convolutional layer followed by a stack of 6n layers with 3×3 convolutions on feature map sizes 32, 16 and 8; with 2n layers for each feature map size. The numbers of filters are 16, 32 and 64 in each set of 2n layers. 32b weights (W) and 32b activations (A) corresponds to a baseline network with full-precision numerics. We find that, in general, reducing the precision of activation maps and weights hurts model accuracy. Further, reducing precision of activations hurts model accuracy much more than reducing precision of the filter parameters. For ResNet-44, with 2b weights and 8b activations, there is a 0.9% degradation in accuracy from baseline full-precision network (7.4% vs. 6.5%). For ResNet-56, this degradation is 1% (7.2% vs. 6.2%).

For both the ResNet configurations on CIFAR-10, we found that we can match accuracy of a 2b weight and 8b activation model by doubling the number of filters of the entire network.

Table 2 shows the effect on accuracy as precision is lowered and filters widened by a smaller factor than 2x – only the filters in the first 1/3rd of the layers are doubled, the remaining layers have the same number of filters as baseline network. With this setting, the accuracy with 2b weights and 8b activations is within 0.5% of baseline full-precision accuracy. Using WRPN with a technique that we will describe next, the accuracy of the network at this precision knob matches with that of baseline.

In practice, we find WRPN scheme to be very simple and effective - starting with a baseline network architecture, one can change the width of each filter map without changing any other network design parameter or hyper-parameters. Reducing precision and simultaneously widening filters keeps the total compute cost of the network under or at-par with baseline cost.222Compute cost is the product of the number of FMA operations and the sum of width of the activation and weight operands. Thus, although the number of raw compute operations increase with widening the filter maps in a layer, the bits required per compute operation is now a fraction of what is required when using full-precision operations. As a result, with appropriate hardware support, one can significantly reduce the dynamic memory requirements, memory bandwidth, computational energy and speed up the training and inference process.

Apprentice [7]: With this scheme we combine network quantization schemes with model compression techniques and show that the accuracies of low-precision networks can be significantly improved by using knowledge distillation techniques. Previous studies on model compression use a large network as the teacher network and a small network as the student network. The small student network learns from the teacher network using a technique called knowledge distillation [5, 1, 11].

We call our approach Apprentice

where a low-precision (student/apprentice) network is learning (and attempting to mimic) the knowledge of a high precision (teacher) network. With this scheme, we start with a full-precision trained (teacher) network and transfer knowledge from this trained network continuously to train a low-precision (student) network from scratch. The knowledge transfer process consists of matching the logits of the teacher network with the softmax scores of the student network. This is included as an addition term in the cost function while training. Figure

2 shows a schematic of the training setup. We find that the low-precision network converges faster and to better accuracy (compared to the student network being trained alone) when a trained complex network guides its training.

Table 3 shows the impact of lowering precision when a low-precision (student) network is paired with a full-precision (ResNet-101) network. We find the Apprentice scheme to improve the baseline full-precision accuracy. The scheme also helps close the gap between the new improved baseline accuracy and the accuracy when lowering the precision of the weights and activations. The gap between 2b weight and 8b activation ResNet-44 is now 0.2%. For ResNet-56, this gap is 0.6%.

WRPN+Apprentice: This scheme combines widening of filters with distillation scheme. The training process is the same as the Apprentice scheme. Table 4 shows the results with this scheme on ResNet. With 2b weights and 8b activations, ResNet-44 is 0.3% better than the baseline we started with (6.2% now vs. 6.5% baseline). Similarly, ResNet-56 is 0.6% better than the baseline (5.6% now vs. 6.2% baseline).

Overall, each of the three schemes described above improve the accuracy of the low-precision network configuration compared to baseline as well as prior proposals.

To take advantage of the low-precision numerics, we developed an accelerator optimized for 2bx8b matrix multiplication (convolution operation can be mapped as a series of small GEMMs). Figure 3 shows the schematic of the accelerator (organized as a systolic array) and the processing engine in each of the systolic cross-points. The accelerator consists of 64 processing engines organized in 8 rows and 8 columns. In the figure, A

matrix corresponds to activation tensor and consists of unsigned integer values (since post-ReLU only positive values are significant). With 2b operand, we do not need a floating-point or integer multiplier. With 2b weights (corresponding to

B matrix in the figure), the possible weight values are {-1, 0, 1}. Thus, to multiply an 8b integer (A) with a weight value (B), we compare the sign of B operand and append this to the A operand or make it zero. The accumulator is a 32b signed integer. Compared to a full-precision accelerator, at the same technology process node, our low-precision accelerator is 15x smaller in area and 12x efficient in power.

With vendors packing more and more compute (FLOPs) on a die, bandwidth is becoming a key issue that affects scaling in large-scale systems. Low-precision techniques help in these scenarios. While low-precision networks have system-level benefits, the drawback of such models is degraded accuracy when compared to full-precision models. We present schemes to improve the accuracy of low-precision networks and close the gap between the accuracy of these models and full-precision models. Each of the schemes improve the accuracy of the low-precision network configuration compared to prior proposals. We motivate the need for a smaller model size in low batch, real-time and resource constrained inference deployment systems. For large batch mode, we discuss benefits of lowering the precision of activation maps as opposed filter weights. Finally, we discuss the design of an accelerator optimized for ternary-precision.