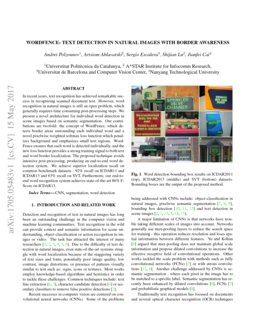 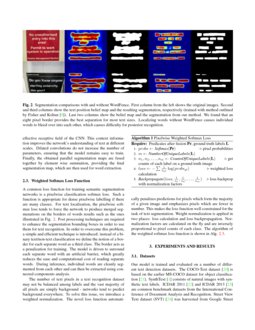 Detection and recognition of text in natural images has long been an outstanding challenge in the computer vision and machine learning communities. Text recognition in the wild can provide context and semantic information for scene understanding, object classification or action recognition in images or video. The task has attracted the interest of many researchers

. Due to the difficulty of text detection in natural images, even state-of-the-art systems struggle with word localization because of the staggering variety of text sizes and fonts, potentially poor image quality, low contrast, image distortions, or presence of patterns visually similar to text such as: signs, icons or textures. Most works employ knowledge-based algorithms and heuristics in order to tackle these challenges. Common techniques include: text line extraction

Recent successes in computer vision are centered on convolutional neural networks (CNNs). Some of the problems being addressed with CNNs include: object-classification in natural images, pixelwise semantic segmentation

A major limitation of CNNs is that networks have trouble taking different scales of images into account. Networks generally use max-pooling layers to reduce the search space for training - this operation reduces resolution and loses spatial information between different features. Yu and Koltun

[9] argued that max-pooling does not maintain global scale information and propose dilated convolutions to increase the effective receptive field of convolutional operations. Other works tackled the scale problem with methods such as fully convolutional networks (FCNs) [7] or with atrous convolutions [12, 8]. Another challenge addressed by CNNs is semantic segmentation - where each pixel in the image has to be matched to a specific label. Semantic segmentation has recently been enhanced by dilated convolutions [9], FCNs [7] and probabilistic graphical models [8].

Traditionally text recognition has focused on documents and several optical character recognition (OCR) techniques have been developed for this task. Text recognition in scene imagery however, requires localizing the text first. Generally, text recognition works by first providing a ”candidate bounding box” – or a proposal for a single word or a word-line. This word proposal is then cropped out of the natural image and fed to a word recognition network which then matches words against an internal dictionary.

In the aforementioned scenario, text localization is considered to be the key task, since a well-cropped proposal can be fed to a word recognition system [16]. Before CNNs, popular methods for text localization utilized computer vision techniques with hand-crafted feature descriptors. More recent works have used CNN features. However, all of these approaches have a limitation of feature driven engineering - there are simply too many edge cases to account for. The detectors generate a large amount of non-text false positives, requiring additional filtering techniques. Often, a number of post-processing steps is needed to reach a good performance.

With the prominence of deep learning, CNN based regression of candidate bounding boxes has started becoming utilized for filtering false positive candidates. Bounding box detection has been proposed in the context of object detection by works such as You Only Look Once (YOLO)

Early work by Zhang et al. [13] used a semantic segmentation model to extract text proposals and refine them by applying hand-crafted heuristics. He et al. [6] improved on previous approaches by introducing a cascade of networks. Gupta et al. [1] adapted YOLO’s approach [10] for text detection and introduced SynthText - a new synthetic text dataset for training. Analogously, F-RCNN [17] was adapted for text recognition by Zhong et al. [5] and Tian et al. [3]. The former integrated the F-RCNN framework into a more powerful model. However, a large number of proposals needed to be filtered with a time consuming process. Tian et al. [3]

fused F-RCNN with a recurrent neural network (RNN), allowing the RNN to consider the proposals as a sequence.

Most current state-of-the-art region of interest (ROI) detectors like F-RCNN [17] use a variation of the following steps: propose bounding boxes, resample pixels of the ROI and then apply a second classifier to filter and improve proposals. In contrast with F-RCNN, our high quality segmentations allow us to extract accurate bounding box proposals directly from the segmentation. The segmentation maps are obtained by inference at different image scales, combining the results with an efficient voting mechanism. Merging the results from different scales helps to eliminate duplicate proposals for the same word and to remove most false positive detections.

Our proposed architecture is inspired by previously mentioned works, but it allows to perform bounding box detection in a single step. Instead of producing a highly non-linear bounding box coordinate prediction as in YOLO [10] and Faster-RCNN [17], our network takes advantage of semantic segmentation to produce a dense pixel labeling map. Afterwards, word proposals are extracted from the given heat map in linear time (see Fig. 1 for examples).

Inspired by the success of deep CNNs with residual connections (ResNets), such as the one for semantic segmentation by Chen

that add full image context to the final classification, before performing a bilinear interpolation on the resulting belief map. Afterwards, connected components are extracted. Each component represents a standalone word on the image which is further processed in the recognition step. Bounding boxes are then extracted from the connected components. Examples are shown in Fig.

Object segmentation, has recently been considerably improved with the introduction of the deconvolutional layer [7], dilated convolutions (increasing effective receptive field) [9], etc. Several published works [13, 6] have adapted object segmentation for text localization. Segmentation for text localization, despite showing promising results, has had trouble distinguishing individual words from segmented images. Generally, post processing methods and heuristics were applied to refine word localization results, or the task was not addressed at all as in the case of textline approaches.

In contrast to the semantic segmentation model introduced by Chen et al. [8], we do not use parallel replications of ResNet-101 on different scales as it makes the network computationally expensive to train. Instead, we use three parallel convolutional layers of the same kernel size, but different dilation parameters. This way we transform the convolutional features into parallel segmentation maps of different receptive fields. Separate dilated convolutions allow us to enlarge the effective receptive field of the CNN. This context information improves the network’s understanding of text at different scales. Dilated convolutions do not increase the number of parameters, ensuring that the model remains easy to train. Finally, the obtained parallel segmentation maps are fused together by element wise summation, providing the final segmentation map, which are then used for word extraction.

A common loss function for training semantic segmentation networks is a pixelwise classification softmax loss. Such a function is appropriate for dense pixelwise labelling if there are many classes. For text localization, the pixelwise softmax loss tends to force the network to produce merged segmenations on the borders of words results such as the ones illustrated in Fig. 2. Post processing techniques are required to enhance the segmentation bounding boxes in order to use them for text recognition. In order to overcome this problem, a simple and efficient technique is introduced: instead of a binary text/non-text classification we define the notion of a border for each separate word as a third class. The border acts as a penalization for training. The model is driven to surround each separate word with an artificial barrier, which greatly reduces the ease and computational cost of reading separate words. During inference, individual words are cleanly segmented from each other and can then be extracted using connected components analysis.

The number of text pixels in a text recognition dataset may not be balanced among labels and the vast majority of all pixels are simply background - networks tend to predict background everywhere. To solve this issue, we introduce a weighted normalization. The novel loss function automatically penalizes predictions for pixels which form the majority of a given image and emphasizes pixels which are fewer in number. This makes the loss function well constrained for the task of text segmentation. Weight normalization is applied in two places: loss calculation and loss backpropagation. Normalization factors are calculated on the fly and are inversely proportional to pixel counts of each class. The algorithm of the weighted softmax loss function is shown in Alg. 1.

Our model is trained and evaluated on a number of different text detection datasets. The COCO-Text dataset [20] is based on the earlier MS-COCO dataset for object classification [21]. SynthText [1] consists of natural images with synthetic text labels. ICDAR 2011 [22] and ICDAR 2013 [23] are common benchmark datasets from the International Conference of Document Analysis and Recognition. Street View Text dataset (SVT) [24] was harvested from Google Street View images. We train our model on MS-COCO, finetune on SynthText and evaluate on ICDAR11, ICDAR13 and SVT for comparison with state-of-the-art methods.

For the evaluation of our word detection results we use a PASCAL VOC style protocol where a proposal with intersection-over-union (IoU) ≥ 0.5 is considered a positive detection. PASCAL VOC is suitable for detecting individual words as it penalizes areas covering multiple words.

Table 1 shows the performance of WDN on benchmark datasets. On average we improved recall by 15% over the previous multi-scale detection method by Gupta et al. [1].

Using ideal, single-word proposals recognition accuracy can be as high as 98% [2]. In order to show the effectiveness and quality of proposals we integrate our model with a state-of-the-art recognition model by Shi et al. [25]. The recognition model consists of an RNN to recognize words of different length. Our word proposals are cropped out and evaluated with the recognition network. We followed the evaluation protocol outlined by Wang et al. [26], where all word proposals that are three characters long or less or those that contain non-alphanumeric characters are ignored. An IoU overlap of 0.5 is required for a positive detection. Results for common recognition dataset are illustrated in Table 2. Our detection network achieves state-of-the-art recall rates - ensuring good candidate words. This combined with the recognition module obtains very accurate results for end-to-end word recognition. The network outperforms results by Jaderberg et al. [2] and is on par or better than Gupta et al. [1].

We have presented the WordFence Detection Network. WDN relies on space between words to accurately split words using purely visual information for a wide variety of fonts, text sizes, scales, orientations and text languages. After segmenting an image proposal bounding boxes are extracted at multiple scales with high detection recall. Lastly, end-to-end word recognition achieves state-of-the-art results with 84 % and 86 % F-Score on ICDAR11 and ICDAR13, respectively. We obtain such high end-to-end scores by leveraging high quality proposals and high recall in the detection stage. Experimental results show that our approach achieves competitive performance on ICDAR11 and ICDAR13 without utilizing any heuristics or knowledge based approaches.111Work was partially supported by the Spanish project TIN2016-74946-P (MINECO/FEDER, UE) and CERCA Programme, Generalitat de Catalunya.