Neural summarization models suffer from the fixed-size input limitation: if text length surpasses the model's maximal number of input tokens, some document content (possibly summary-relevant) gets truncated Independently summarizing windows of maximal input size disallows for information flow between windows and leads to incoherent summaries. We propose windowing models for neural abstractive summarization of (arbitrarily) long texts. We extend the sequence-to-sequence model augmented with pointer generator network by (1) allowing the encoder to slide over different windows of the input document and (2) sharing the decoder and retaining its state across different input windows. We explore two windowing variants: Static Windowing precomputes the number of tokens the decoder should generate from each window (based on training corpus statistics); in Dynamic Windowing the decoder learns to emit a token that signals encoder's shift to the next input window. Empirical results render our models effective in their intended use-case: summarizing long texts with relevant content not bound to the very document beginning. 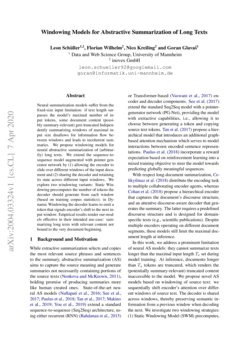 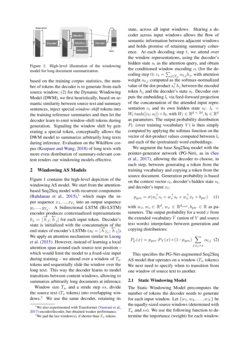 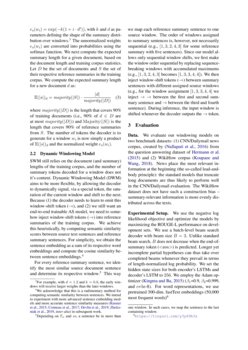 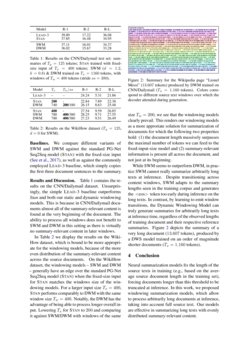 encoder and decoder components. see2017get extend the standard Seq2Seq model with a pointer-generator network (PG-Net), providing the model with extractive capabilities, i.e., allowing it to choose between generating a token and copying source text tokens. P17-1108 propose a hierarchical model that introduces an additional graph-based attention mechanism which serves to model interactions between encoded sentence representations. Paulus18 incorporate a reward expectation based on reinforcement learning into a mixed training objective to steer the model towards predicting globally meaningful sequences.

With respect long-document summarization, celikyilmaz2018deep distribute the encoding task to multiple collaborating encoder agents, whereas cohan2018discourse propose a hierarchical encoder that captures the document’s discourse structure, and an attentive discourse-aware decoder that generates the summary. The latter requires a predefined discourse structure and is designed for domain-specific texts (e.g., scientific publications). Despite multiple encoders operating on different document segments, these models still limit the maximal document length at inference.

In this work, we address a prominent limitation of neural AS models: they cannot summarize texts longer than the maximal input length Tx set during model training. At inference, documents longer than Tx

tokens are truncated, which renders the (potentially summary-relevant) truncated content inaccessible to the model. We propose novel AS models based on windowing of source text: we sequentially shift encoder’s attention over different windows of source text. The decoder is shared across windows, thereby preserving semantic information from a previous window when decoding the next. We investigate two windowing strategies: (1) Static Windowing Model (SWM) precomputes, based on the training corpus statistics, the number of tokens the decoder is to generate from each source window; (2) for the Dynamic Windowing Model (DWM), we first heuristically, based on semantic similarity between source text and summary sentences, inject special

window-shift tokens into the training reference summaries and then let the decoder learn to emit window-shift tokens during generation. Signaling the window shift by generating a special token, conceptually allows the DWM model to summarize arbitrarily long texts during inference. Evaluation on the WikiHow corpus Koupaee and Wang (2018) of long texts with more even distribution of summary-relevant content renders our windowing models effective.

Figure 1 contains the high-level depiction of the windowing AS model. We start from the attention-based Seq2Seq model with recurrent components Bahdanau et al. (2015),111We also experimented with Transformer Vaswani et al. (2017) encoder/decoder, but obtained weaker performance. which maps the input sequence x1,...,xTx into an output sequence y1,...,yTy. A bidirectional LSTM (Bi-LSTM) encoder produces contextualized representations hj=[→hj;←hj] for each input token. Decoder’s state is initialized with the concatenation of the end states of encoder’s LSTMs (s0=[→hTx;←h1]). We apply an attention mechanism similar to luong15effective. However, instead of learning a local attention span around each source text position – which would limit the model to a fixed-size input during training – we attend over a window of Tw tokens and sequentially slide the window over the long text. This way the decoder learns to model transitions between content windows, allowing to summarize arbitrarily long documents at inference.

and a stride step

We pad the last window(s), if shorter than

Tw tokens. We use the same decoder, retaining its state, across all input windows. Sharing a decoder across input windows allows the flow of semantic information between adjacent windows and holds promise of retaining summary coherence. At each decoding step t, we attend over the window representations, using the decoder’s hidden state st as the attention query, and obtain the conditioned window encoding ct (for the decoding step t): ct=∑j∈Twαt,jhj, with attention weight αt,j computed as the softmax-normalized value of the dot-product s⊤thj between the encoded token hj and the decoder’s state st. Decoder outputs the embedding lt via feed-forward projection of the concatenation of the attended input representation ct and its own hidden state st: lt=Wltanh([ct;st])+bl, with Wl∈Rd × 2d,bl∈Rd

as parameters. The output probability distribution

lt and each of the (pretrained) word embeddings.

We augment the base Seq2Seq model with the pointer-generator network (PG-Net), as in See et al. (2017), allowing the decoder to choose, in each step, between generating a token from the training vocabulary and copying a token from the source document. Generation probability is based on the context vector ct, decoder’s hidden state st, and decoder’s input xt:

with wc, ws ∈Rd, wx∈Rdemb,bptr∈R as parameters. The output probability for a word x from the extended vocabulary ^V (union of V

and source text words) interpolates between generation and copying distributions:

This specifies the PG-Net-augmented Seq2Seq AS model that operates on a window (Tw tokens). We next need to specify when to transition from one window of source text to another.

The Static Windowing Model precomputes the number of tokens the decoder needs to generate for each input window. Let {w1,w2,…,wN} be the equally-sized source windows (determined with Tw and ss). We use the following function to determine the importance (weight) for each window: es(wi)=exp(−k(1+i⋅di)), with k and d as parameters defining the shape of the summary distribution over windows.333For example, with d=1.2 and k=0.8, the early windows will receive larger weights than the later windows. The unnormalized weights es(wi) are converted into probabilities using the softmax function. We next compute the expected summary length for a given document, based on the document length and training corpus statistics. Let D be the set of documents and S the set of their respective reference summaries in the training corpus. We compute the expected summary length for a new document d as:

SWM still relies on the document (and summary) lengths of the training corpus, and the number of summary tokens decoded for a window does not it’s content. Dynamic Windowing Model (DWM) aims to be more flexible, by allowing the decoder to dynamically signal, via a special token, the saturation of the current window and shift to the next. Because (1) the decoder needs to learn to emit this window-shift token (→), and (2) we still want an end-to-end trainable AS model, we need to somehow inject window-shift tokens (→

For every reference summary sentence, we identify the most similar source document sentence and determine its respective window.555Depending on Tw and ss, a sentence be in more than one window. In such cases, we map the sentence to the last containing window. This way we map each reference summary sentence to one source window. The order of windows assigned to summary sentences is, however, not necessarily sequential (e.g., [1,3,2,4,3] for some reference summary with five sentences). Since our model allows only sequential window shifts, we first make the window order sequential by replacing sequence-breaking windows with accumulated maximums (e.g., [1,3,2,4,3] becomes [1,3,3,4,4]). We then inject window-shift tokens (→) between summary sentences with different assigned source windows (e.g., for the window assignment [1,3,3,4,4] we inject → → between the first and second summary sentence and → between the third and fourth sentence). During inference, the input window is shifted whenever the decoder outputs the → token.

We evaluate our windowing models on two benchmark datasets: (1) CNN/Dailymail news corpus, created by Nallapati et al. (2016) from the question answering dataset of hermann2015teaching and (2) WikiHow corpus Koupaee and Wang (2018). News place the most relevant information at the beginning (the so-called lead-and-body principle): the standard models that truncate long documents are thus likely to perform well in the CNN/Dailymail evaluation. The WikiHow dataset does not have such a construction bias – summary-relevant information is more evenly distributed across the texts.

We use the negative log likelihood objective and optimize the models by maximizing the ROUGE-L performance on development sets. We use a batch-level beam search decoder with beam size B=3. Unlike standard beam search, B does not decrease when the end-of-summary token (<eos>) is predicted. Longer yet incomplete partial hypotheses can thus take over completed beams whenever they prevail in terms of length-normalized log probability. We set the hidden state sizes for both encoder’s LSTMs and decoder’s LSTM to 256. We employ the Adam optimizer Kingma and Ba (2015) (β1=0.9, β2=0.999, and ϵ=1e-8). For word representations, we use pretrained 300-dim. fastText embeddings (50,000 most frequent words)666https://tinyurl.com/y3y69h3z

We compare different variants of SWM and DWM against the standard PG-Net Seq2Seq model (Stan) with the fixed-size input See et al. (2017), as well as against the commonly employed Lead-3 baseline, which simply copies the first three document sentences to the summary.

Table 1 contains the results on the CNN/Dailymail dataset. Unsurprisingly, the simple Lead-3 baseline outperforms Stan and both our static and dynamic windowing models. This is because in CNN/Dailymail documents almost all of the summary-relevant content is found at the very beginning of the document. The ability to process all windows does not benefit to SWM and DWM in this setting as there is virtually no summary-relevant content in later windows.

In Table 2 we display the results on the WikiHow dataset, which is bound to be more appropriate for the windowing models, because of the more even distribution of the summary-relevant content across the source documents.

On the WikiHow dataset, the windowing models – SWM and DWM – generally have an edge over the standard PG-Net Seq2Seq model (Stan) when the fixed-size input for Stan matches the windows size of the windowing models. For a larger input size Tx=400, Stan performs comparably to DWM with the same window size Tw=400. Notably, the DWM has the advantage of being able to process longer overall input. Lowering Tx for Stan to 200 and comparing it against SWM/DWM with windows of the same size Tw=200, we see that the windowing models clearly prevail. This renders our windowing models as a more approriate solution for summarization of documents for which the following two properties hold: (1) the document length massively surpasses the maximal number of tokens we can feed to the fixed-input-size model and (2) summary-relevant information is present all across the document, and not just at its beginning.

While SWM seems to outperform DWM, in practice SWM cannot really summarize arbitrarily long texts at inference. Despite transitioning across content windows, SWM adapts to the summary lengths seen in the training corpus and generates the  <eos>  token too early during inference on the long texts. In contrast, by learning to emit window transitions, the Dynamic Windowing Model can truly generate summaries for arbitrarily long texts at inference time, regardless of the observed lengths of training document and their respective reference summaries. Figure 2 depicts the summary of a very long document (13.607 tokens), produced by a DWS model trained on an order of magnitude shorter documents (Tx=1.160 tokens).

Neural summarization models fix the length of the source texts in training (e.g., based on the average source document length in the training set), forcing documents longer than this threshold to be truncated at inference. In this work, we proposed windowing summarization models, which allow to process arbitrarily long documents at inference, taking into account full source text. Our models are effective in summarizing long texts with evenly distributed summary-relevant content.