Why should you trust my interpretation? Understanding uncertainty in LIME predictions

Methods for interpreting machine learning black-box models increase the outcomes' transparency and in turn generates insight into the reliability and fairness of the algorithms. However, the interpretations themselves could contain significant uncertainty that undermines the trust in the outcomes and raises concern about the model's reliability. Focusing on the method "Local Interpretable Model-agnostic Explanations" (LIME), we demonstrate the presence of two sources of uncertainty, namely the randomness in its sampling procedure and the variation of interpretation quality across different input data points. Such uncertainty is present even in models with high training and test accuracy. We apply LIME to synthetic data and two public data sets, text classification in 20 Newsgroup and recidivism risk-scoring in COMPAS, to support our argument. 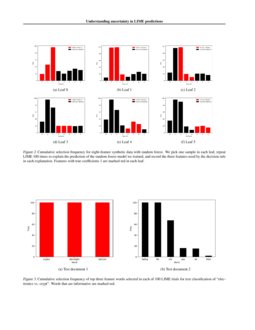 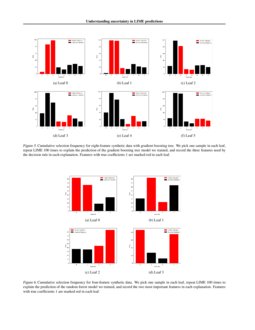 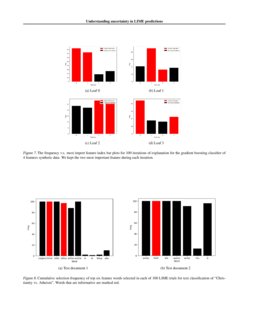 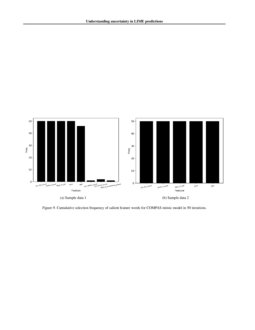 An unexpected unity among methods for interpreting model predictions

Understanding why a model made a certain prediction is crucial in many d...
Scott Lundberg, et al. ∙

While machine learning models have become increasingly important for decision making in many areas (Zeng et al., 2017; Rajkomar et al., 2018), many machine learning models are “black-box” in that the process by which such models make predictions can be hard for humans to understand. Explanations of model predictions can help increase users’ trust in the model (Lipton, 2016; Ribeiro et al., 2016), determine if the model achieves desirable properties such as fairness, privacy, etc. (Doshi-Velez & Kim, 2017), and debug possible errors in the model (Ribeiro et al., 2018b).

In this paper, we address the question: when can we trust an explanation? In particular, we study the local explanation method Local Interpretable Model-Agnostic Explanations (LIME) (Ribeiro et al., 2016). Briefly, LIME explains the prediction of a desired input by sampling its neighboring inputs and learning a sparse linear model based on the predictions of these neighbors; features with large coefficients in the linear model are then considered to be important for that input’s prediction. We demonstrate that training LIME explanations involve sources of uncertainty that should not be overlooked. More specifically, generating a local explanation for an input requires sampling around the input to generate an explanation for its prediction. In this paper, we show that this sampling can lead to statistical uncertainty in interpretation.

Potential issues with LIME’s stability and robustness have been pointed out by Alvarez-Melis & Jaakkola, who showed that while LIME explanations can be stable when explaining linear models, for nonlinear models this is not always the case (Alvarez-Melis & Jaakkola, 2018). Testing LIME on images, Lee et al. observed that LIME colored superpixels differently across different iterations and proposed an aggregated visualization to reduce the perception of different explanations over different iterations (Lee et al., 2019). However, they did not study the source of this instability of explanations – the focus of our paper.

Given a black box model f, and a target point x to be explained, LIME samples neighbors of x and their black-box outcomes and chooses a model g from some interpretable functional space G by solving

is some probability distribution around

x and Ω(g) is a penalty for model complexity. Ribeiro et al. (Ribeiro et al., 2016) suggests several methods to achieve sparse solution, including K-LASSO as the interpretable model. For K-LASSO, we let Ω=∞1[∥wg∥0>K], where w denotes the coefficients of the linear model, and sample points near x from πx to train K-LASSO. We observe that this procedure involves three sources of uncertainty:

We use one synthetic data example and two real datasets to demonstrate the three aforementioned sources of uncertainty. To show the sampling variance, we run LIME multiple times for a single data point, record the top few features selected by K-LASSO each time, and observe the cumulative selection probability for each selected feature. Whether features are consistently selected over different trials reflects LIME’s instability in explaining the data point. Then, we tune the parameters of LIME to probe the sensitivity of the explanations to sample size and sampling proximity. Finally, we compare LIME explanations of different data points by assessing whether the selected features are informative in the real context. Variation in explanation on model credibility across different data points raises concern about the credibility of LIME as a global explanation for the model.

Data: Given the number of features N

, we generate training and test data from local sparse linear models on uniformly distributed input in

. To illustrate LIME’s local behavior at different data points, we partition them with a known decision tree. Within each partition, we assign labels on each data point

based on a linear classifier with known coefficients

β as shown in Equation 2.

We consider two cases where the number of features is 4 and 8 respectively. Figure 1 presents a way of splitting the data into six leaves for N=8 with known coefficients, where three out of eight features have coefficients 1 in each leaf. The data splitting and coefficients for N=4 are presented in Figure 4 in Appendix A.

We present results for the case where we apply LIME to interpret black-box models (random forest and gradient boosting tree) trained with eight-feature synthetic data. We run LIME on one data point in each of the six leaves. We first notice that different trials potentially select different features due to sampling variance. Figure

2 shows the cumulative selection frequency of top three features in each trial when LIME interprets a random forest model; the case with gradient boosting is shown in Figure 5 in Appendix A

. LIME captures the signal of the first three features, which are used globally in the tree splitting of the data. Locally, however, different features are important for each individual leaf, which LIME fails to reflect. Thus, its explanation cannot be considered stable around each input data point in a tree structure. We further notice that LIME by default draws samples from a rescaled standard normal distribution

N(0,σ2) near the test point, where σ2, the variance of the training data, determines the sampling proximity. The experiments show that LIME tends to capture locally important features better with a smaller sampling proximity and pick up global features with a larger sampling proximity. Since tuning this parameter allows LIME to explore both global and local structure in the data, we suggest users to think consciously about the choice of its value. As an example, we tune LIME’s sampling proximity for a data point on leaf 5 in the eight-feature synthetic data, shown in Figure 1(f). When a sample is drawn from N(0,σ2) near the test point, LIME captures the global features used for tree splitting; when a sample is drawn from N(0,(0.1σ)2), LIME successfully picks up signal from the three local features 5-7. Results for running the same procedure on four-feature synthetic data are presented in Figures 6 and 7 in Appendix A.

, even for text classification models with high test accuracy, some feature words that LIME selects are quite arbitrary and uninformative. To examine this behavior further, we use Multinomial Naive Bayes classifier for two examples of document classification, namely Atheism vs. Christianity and electronics vs. crypt.

Results: Multinomial Naive Bayes classifiers are trained for the aforementioned two classification examples, with test accuracy 0.9066 and 0.9214 respectively. However, as pointed out in (Ribeiro et al., 2016), we need to know the feature importance for each output in order to establish trust in the model. In particular, we find that LIME’s local explanations are not always plausible for different test documents. As shown in Figure 3, the selected feature words for the first document (crypto, sternlight and netcom) display no variation for different trials and are relevant in content, which makes the model seem very credible. However, the selected feature words for the second document are not informative at all. Thus, the model’s credibility, as explained by LIME, varies across different input data. We also include results for Christianity vs. Atheism in Figure 8 in Appendix A, which also display a difference in model credibility for different documents.

Data: The Correctional Offender Management Profiling for Alternative Sanctions (COMPAS) is a risk-scoring algorithm developed by Northpointe to assess a criminal defendant’s likelihood to recidivate. The risk is classified as High, Medium and Low based on crime history and category, jail time, age, demographics, etc. We study a subset of the COMPAS dataset collected and processed by ProPublica (Larson et al., 2016), with the goal of examining the presence of demographic bias in risk-scoring. As we do not have access to the true COMPAS model, we train a random forest classifier as a mimic model (Tan et al., 2018b), using selected features and risk assessment text labels from COMPAS. We examine salient features selected by LIME explanations on multiple COMPAS records.

Results: We test and analyze LIME explanation of the random forest classifier with both numerical and categorical features. Unlike the uncertainty we observe in previous experiments on synthetic and 20 Newsgroup data, we see consistent explanation results on different test data points. LIME is applied to two data points that are classified as high risk by COMPAS. The results are shown in Figure 9 in Appendix A. We consider these explanations to be trustworthy due to the following two observations: 1) there is little variation in the selection of important features in different trials on the same data point, and 2) explanation is consistent for different data points, since the same features are selected for the two different data points, including race and age. Further analysis using LIME suggests that the mimic model is using demographic properties as important features in predicting a risk score. This in turn shows it is probable that the COMPAS model makes use of demographic features for recidivism risk assessment, so further investigation would be meaningful to gauge the fairness of the algorithm.

Explanation methods for black-box models may themselves contain uncertainty that calls into question the reliability of the black-box predictions and the models themselves. We demonstrate the presence of three sources of uncertainty in the explanation method Local Interpretable Model-agnostic Explanations (LIME), namely the randomness in its sampling procedure, variation with sampling proximity, and variation in explained model credibility for different data points. The uncertainty in LIME is illustrated by numerical experiments on synthetic data, text classification examples in 20 Newsgroup data and recidivism risk-scoring in COMPAS data.

a.1 Setting for four-feature synthetic data

For sample points with four features, we use the first two dimensions of features as their x and y coordinates. We assign each quadrant to different leaf, ignoring the sample points on the x or y axis. For each leaf, we assign different coefficients to their features, as shown in Figure 4. We fit and explain both random forest and gradient boosting classifier within this setting, see Figure 6 and Figure 7.

We select two classes from 20 newsgroup dataset, then apply term frequency-inverse document freque (tf-idf) vectorizer with default settings. Stop words are not removed from resulting tokens as we would like to see if the model is using irrelevant features to predict the results. For the the classification between Electronics and Crypt, we analyze the explanation over two different test data points. We could see from the results that the explanation of test data document one contains several indicative words, such as crypto, netcom and Sternlight in this case. However, the explanation results for test data point two contains only one indicative word information. We also include example for and the result is shown in Figure

The COMPAS dataset from ProPublica contains a lot irrelevant columns, as well as null values. We selected twelve relevant columns of the dataset, then drop the rows that contain null value. Specifically, we exclude the decile score columns as it is directly related to the text label. We then encode the categorical features, such as sex and race, using one-hot encoder, and encode the label text using label encoder. After the simple data pre-process, we trained a random forest classifier on the processed dataset to mimic the COMPAS black-box model, which we do not have access to.