Why is the current seeding regime of the UEFA Champions League unfair?

Fairness has several interpretations in sports, one of them being that the rules should guarantee incentive compatibility, namely, a team cannot be worse off due to better results in any feasible scenario. The current seeding regime of the most prestigious annual European club football tournament, the UEFA (Union of European Football Associations) Champions League, is shown to violate this requirement since the 2015/16 season. In particular, if the titleholder qualifies for the first pot by being a champion in a high-ranked league, its slot is given to a team from a lower-ranked association, which can harm a top club from the domestic championship of the titleholder. However, filling all vacancies through the national leagues excludes the presence of perverse incentives. UEFA is encouraged to introduce this policy from the 2021-24 cycle onwards. 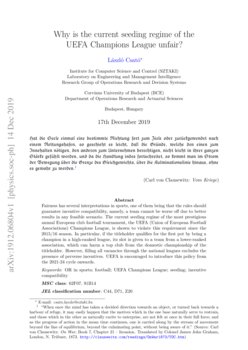 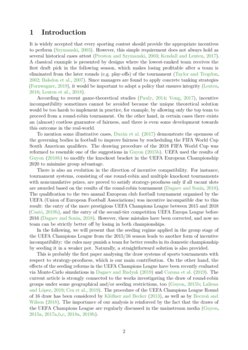 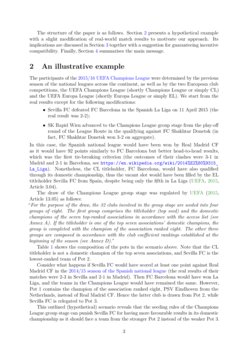 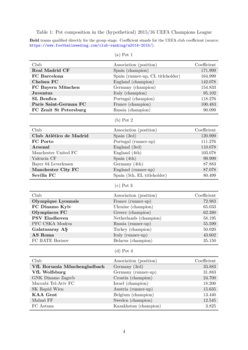 It is widely accepted that every sporting contest should provide the appropriate incentives to perform (Szymanski2003). However, this simple requirement does not always hold as several historical cases attest (PrestonSzymanski2003; KendallLenten2017). A classical example is presented by designs where the lowest-ranked team receives the first draft pick in the following season, which makes losing profitable after a team is eliminated from the later rounds (e.g. play-offs) of the tournament (TaylorTrogdon2002; BalsdonFongThayer2007). Since managers are found to apply concrete tanking strategies (Fornwagner2019), it would be important to adopt a policy that ensures integrity (Lenten2016; LentenSmithBoys2018).

According to recent game-theoretical studies (Pauly2014; Vong2017), incentive incompatibility sometimes cannot be avoided because the unique theoretical solution would be too harsh to implement in practice, for example, by allowing only the top team to proceed from a round-robin tournament. On the other hand, in certain cases there exists an (almost) costless guarantee of fairness, and there is even some development towards this outcome in the real-world.

To mention some illustrative cases, DuranGuajardoSaure2017 demonstrate the openness of the governing bodies in football to improve fairness by rescheduling the FIFA World Cup South American qualifiers. The drawing procedure of the 2018 FIFA World Cup was reformed to resemble one of the suggestions in Guyon2015a. UEFA used the results of Guyon2018a to modify the knockout bracket in the UEFA European Championship 2020 to minimise group advantage.

There is also an evolution in the direction of incentive compatibility. For instance, tournament systems, consisting of one round-robin and multiple knockout tournaments with noncumulative prizes, are proved to satisfy strategy-proofness only if all vacant slots are awarded based on the results of the round-robin tournament (DagaevSonin2018). The qualification to the two annual European club football tournament organised by the UEFA (Union of European Football Associations) was incentive incompatible due to this result: the entry of the more prestigious UEFA Champions League between 2015 and 2018 (Csato2019b), and the entry of the second-tier competition UEFA Europa League before 2016 (DagaevSonin2018). However, these mistakes have been corrected, and now no team can be strictly better off by losing in both championships.

In the following, we will present that the seeding regime applied in the group stage of the UEFA Champions League from the 2015/16 season leads to another form of incentive incompatibility: the rules may punish a team for better results in its domestic championship by seeding it in a weaker pot. Naturally, a straightforward solution is also provided.

This is probably the first paper analysing the draw systems of sports tournaments with respect to strategy-proofness, which is our main contribution. On the other hand, the effects of the seeding reforms in the UEFA Champions League have been recently evaluated via Monte-Carlo simulations in

DagaevRudyak2019 and CoronaForrestTenaWiper2019. The current article is strongly connected to the works investigating the draw of round-robin groups under some geographical and/or seeding restrictions, too (Guyon2015a; LalienaLopez2019; CeaDuranGuajardoSureSiebertZamorano2019). The procedure of the UEFA Champions League Round of 16 draw has been considered by KlossnerBecker2013, as well as by BoczonWilson2018. The importance of our analysis is reinforced by the fact that the draws of the UEFA Champions League are regularly discussed in the mainstream media (Guyon2015b; Guyon2017c; Guyon2017b; Guyon2017a; Guyon2018c; Guyon2019c).

The structure of the paper is as follows. Section 2 presents a hypothetical example with a slight modification of real-world match results to motivate our approach. Its implications are discussed in Section 3 together with a suggestion for guaranteeing incentive compatibility. Finally, Section LABEL:Sec4 summarises the main message.

In this case, the Spanish national league would have been won by Real Madrid CF as it would have 92 points similarly to FC Barcelona but better head-to-head results, which was the first tie-breaking criterion (the outcomes of their clashes were 3-1 in Madrid and 2-1 in Barcelona, see https://en.wikipedia.org/wiki/2014%E2%80%9315_La_Liga). Nonetheless, the CL titleholder, FC Barcelona, would have also qualified through its domestic championship, thus the vacant slot would have been filled by the EL titleholder Sevilla FC from Spain, despite being only the fifth in La Liga (UEFA2015a, Article 3.04).

The draw of the Champions League group stage was regulated by UEFA2015a as follows:

“For the purpose of the draw, the 32 clubs involved in the group stage are seeded into four groups of eight. The first group comprises the titleholder (top seed) and the domestic champions of the seven top-ranked associations in accordance with the access list (see Annex A). If the titleholder is one of the top seven associations’ domestic champions, the group is completed with the champion of the association ranked eight. The other three groups are composed in accordance with the club coefficient rankings established at the beginning of the season (see Annex D).”

Table 1 shows the composition of the pots in the scenario above. Note that the CL titleholder is not a domestic champion of the top seven associations, and Sevilla FC is the lowest-ranked team of Pot 2.

Consider what happens if Sevilla FC would have scored at least one point against Real Madrid CF in the 2014/15 season of the Spanish national league (the real results of their matches were 2-3 in Sevilla and 2-1 in Madrid). Then FC Barcelona would have won La Liga, and the teams in the Champions League would have remained the same. However, Pot 1 contains the champion of the association ranked eight, PSV Eindhoven from the Netherlands, instead of Real Madrid CF. Hence the latter club is drawn from Pot 2, while Sevilla FC is relegated to Pot 3.

This outlined (hypothetical) scenario reveals that the seeding rules of the Champions League group stage can punish Sevilla FC for having more favourable results in its domestic championship as it should face a team from the stronger Pot 2 instead of the weaker Pot 3.

What is the price of seeded in Pot 3 rather than in Pot 2? CoronaForrestTenaWiper2019 analyse the effects of the new seeding regime for the teams participating in the 2015/16 Champions League. Compared to the original seeding based exclusively on the UEFA club coefficients, FC Shakhtar Donetsk was lowered to Pot 3, which lead to a substantial reduction in the probability of qualifying to the first knockout round, from 0.633 to 0.483.

We have also attempted to quantify how Sevilla FC suffers from the unfair rules. For this purpose, the club Elo ratings from http://clubelo.com/ have been used. It measures the strength of each club on the basis of its past results such that winning against a stronger team is more valuable, while the influence of a game decreases when new matches are played. Besides that, club Elo also reflects home advantage and goal difference. Elo-inspired methods provide good predictive performance (LasekSzlavikBhulai2013), and have been extensively applied in the scientific literature (HvattumArntzen2010; LasekSzlavikGagolewskiBhulai2016; CeaDuranGuajardoSureSiebertZamorano2019; Csato2019n). In particular, Csato2019q uses the same dataset to illuminate the impact of reforming the Champions League qualification in 2018.

In order to take into account the dynamic nature of this estimation of strength, the average of the Elo ratings on the day of the group stage draw (27 August 2015, see

http://clubelo.com/2015-08-27/Data) and one day after the last match of the group stage (10 December 2015, http://clubelo.com/2015-12-10/Data) have been considered. Furthermore, clubs from the same association could not be drawn against each other in the group stage of the Champions League, therefore Sevilla FC is not allowed to play against Real Madrid, Club Atlético de Madrid, and Valencia CF if it would be drawn from Pot 3.