Who Asked Us? How the Theory of Computing Answers Questions about Analysis

Algorithmic fractal dimensions – constructs of computability theory – have recently been used to answer open questions in classical geometric measure theory, questions of mathematical analysis whose statements do not involve computability theory or logic. We survey these developments and the prospects for future such results. 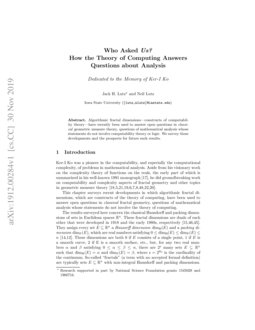 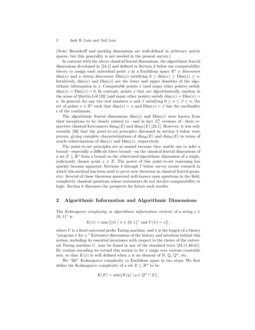 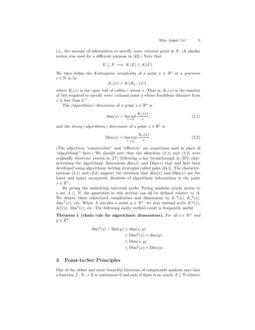 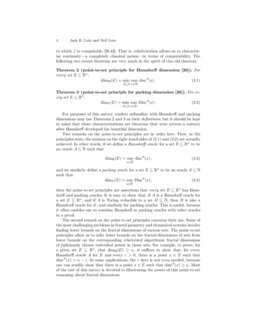 An update on Weihrauch complexity, and some open questions

A Methodology for Empirical Analysis of LOD Datasets

An opinion piece by Abigail Thompson in the AMS Notices has engendered a...
Joshua Paik, et al. ∙

In this paper we give a survey of methods used to calculate values of re...
E. J. Evans, et al. ∙

The Modern Mathematics of Deep Learning

These reminiscences are about the "dark ages" of algorithmic information...
V. V. V'yugin, et al. ∙

Ker-I Ko was a pioneer in the computability, and especially the computational complexity, of problems in mathematical analysis. Aside from his visionary work on the complexity theory of functions on the reals, the early part of which is summarized in his well-known 1991 monograph [17], he did groundbreaking work on computability and complexity aspects of fractal geometry and other topics in geometric measure theory [18, 5, 21, 19, 6, 7, 8, 48, 22, 20].

In contrast with the above classical fractal dimensions, the algorithmic fractal dimensions developed in [24, 1] and defined in Section 2 below use computability theory to assign each individual point x in a Euclidean space Rn a dimension dim(x) and a strong dimension Dim(x) satisfying 0≤dim(x)≤Dim(x)≤n. Intuitively, dim(x) and Dim(x) are the lower and upper densities of the algorithmic information in x. Computable points x (and many other points) satisfy dim(x)=Dim(x)=0. In contrast, points x that are algorithmically random in the sense of Martin-Löf [33] (and many other points) satisfy dim(x)=Dim(x)=n. In general, for any two real numbers α and β satisfying 0≤α≤β≤n, the set of points x∈Rn such that dim(x)=α and Dim(x)=β has the cardinality c of the continuum.

The algorithmic fractal dimensions dim(x) and Dim(x) were known from their inceptions to be closely related to—and in fact Σ01 versions of—their respective classical forerunners dimH(E) and dimP(E) [24, 1]. However, it was only recently [26] that the point-to-set principles discussed in section 3 below were proven, giving complete characterizations of dimH(E) and dimP(E) in terms of oracle relativizations of dim(x) and Dim(x), respectively.

The point-to-set principles are so named because they enable one to infer a bound—especially a difficult lower bound—on the classical fractal dimensions of a set E⊆Rn from a bound on the relativized algorithmic dimension of a single, judiciously chosen point x∈E. The power of this point-to-set reasoning has quickly become apparent. Sections 4 through 7 below survey recent research in which this method has been used to prove new theorems in classical fractal geometry. Several of these theorems answered well-known open questions in the field, completely classical questions whose statements do not involve computability or logic. Section 8 discusses the prospects for future such results.

The Kolmogorov complexity, or algorithmic information content, of a string x∈{0,1}∗ is

is a fixed universal prefix Turing machine, and

π is the length of a binary “program π for x.” Extensive discussions of the history and intuition behind this notion, including its essential invariance with respect to the choice of the universal Turing machine U, may be found in any of the standard texts [23, 11, 40, 41]. By routine encoding we extend this notion to let x range over various countable sets, so that K(x) is well defined when x is an element of N, Q, Qn, etc.

i.e., the amount of information to specify some rational point in E. (A similar notion was used for a different purpose in [42].) Note that

where Bε(x) is the open ball of radius ε about x. That is, Kr(x) is the number of bits required to specify some rational point q whose Euclidean distance from x is less than 2−r.

The (algorithmic) dimension of a point x∈Rn is

and the strong (algorithmic) dimension of a point x∈Rn is

(The adjectives “constructive” and “effective” are sometimes used in place of “algorithmic” here.) We should note that the identities (2.1) and (2.2) were originally theorems proven in [27] (following a key breakthrough in [37]) characterizing the algorithmic dimensions dim(x) and Dim(x) that had first been developed using algorithmic betting strategies called gales [24, 1]. The characterizations (2.1) and (2.2) support the intuition that dim(x) and Dim(x) are the lower and upper asymptotic densities of algorithmic information in the point x∈Rn.

By giving the underlying universal prefix Turing machine oracle access to a set A⊆N, the quantities in this section can all be defined relative to A. We denote these relativized complexities and dimensions by KA(x), KAr(x), dimA(x), etc. When A encodes a point y∈Rn, we may instead write Ky(x), Kyr(x), dimy(x), etc. The following easily verified result is frequently useful.

One of the oldest and most beautiful theorems of computable analysis says that a function f:R→R is continuous if and only if there is an oracle A⊆N relative to which f is computable [39, 43]. That is, relativization allows us to characterize continuity—a completely classical notion—in terms of computability. The following two recent theorems are very much in the spirit of this old theorem.

For purposes of this survey, readers unfamiliar with Hausdorff and packing dimensions may use Theorems 3.1 and 3.2 as their definitions, but it should be kept in mind that these characterizations are theorems that were proven a century after Hausdorff developed his beautiful dimension.

Two remarks on the point-to-set principles are in order here. First, as the principles state, the minima on the right-hand sides of (3.1) and (3.2) are actually achieved. In other words, if we define a Hausdorff oracle for a set E⊆Rn to be an oracle A⊆N such that

The proof of this fact for Borel sets is simple [14], but Marstrand’s original proof of the general result is more difficult [36]

. Using the point-to-set principle for Hausdorff dimension, the general result is an almost trivial consequence of the chain rule, Theorem

2.1 [28]. Tricot [46] proved related inequalities about packing dimension, including the fact that for all E,F⊆Rn,

Xiao [47] showed that for every Borel set E⊆Rn and ε>0, there exists a Borel set F⊆Rn such that

Bishop and Peres [4] independently showed that for Borel (or analytic) E there exists a compact F satisfying (4.1); they also later commented that that it would be straightforward to modify their construction to achieve ε=0.

Using the point-to-set principles, N. Lutz proved for arbitrary sets E that ε=0 can be achieved in (4.1), albeit not necessarily by a compact or Borel set F.

The particular set F constructed in the proof of this theorem is the set of all points x∈Rn with dimA(x)≤n−dimP(E), for a carefully chosen oracle A.

Given a parameter x∈R and a set E⊆R2 with dimH(E)≥1, what can we say about the Hausdorff dimension of the vertical slice Ex={y:(x,y)∈E}? Without further information, we can only give the trivial upper bound,

For instance, equality holds in (5.1) whenever {x}×[0,1]⊆E. It would be more informative, then, to ask about the Hausdorff dimension of a random vertical slice of E. The Marstrand slicing theorem tells us that if E is a Borel set, then for Lebesgue almost every x∈E,

Several more general results giving upper bounds on the Hausdorff dimension of the intersections of random transformations of restricted classes of sets have been proven, including theorems by Mattila [34, 35, 36] and Kahane [16]; in particular, Falconer [14] showed that when E,F⊆Rn are Borel sets,

holds for Lebesgue almost every z∈R. Using the point-to-set principle, N. Lutz showed that this inequality holds even when the Borel assumption is removed.

A Kakeya set in Rn is a set that contains unit-length line segments in all directions. That is, a set E⊆Rn such that for every direction a∈Sn−1 (the (n−1)-dimensional unit sphere in Rn), there exists b∈Rn with {ax+b∣x∈[0,1]}⊆E.

J. Lutz and N. Lutz gave computability theoretic proofs of both of these facts. They showed that the former corresponds to the existence of lines in all directions that contain no random points [25], and that the latter corresponds to the fact that for any random pair (a,x)∈R2, dim(x,ax+b)=2 holds for all b∈R [26].

Stull [44] gave a new computability theoretic proof of (6.1), based on the point-to-principle. N. Lutz and Stull used the point-to-set principle to give a bound that improves on (6.1) whenever α,β<1 and β<2α.

Let E⊆R2 be any set. Then for Lebesgue almost every a∈S1,

As the preceding four sections show, the point-to-set principles have enabled the theory of computing to make significant advances in classical fractal geometry in a very short time. There is every indication that more such advances are on the near horizon. But a scientist with Ker-I Ko’s vision would already be asking about more distant horizons. What other areas of classical mathematical analysis can be advanced by analogous methods? Are there intrinsic limits of such methods? We look forward to seeing the answers to these questions take shape.