Where to Look Next: Unsupervised Active Visual Exploration on 360° Input

We address the problem of active visual exploration of large 360 inputs. In our setting an active agent with a limited camera bandwidth explores its 360 environment by changing its viewing direction at limited discrete time steps. As such, it observes the world as a sequence of narrow field-of-view 'glimpses', deciding for itself where to look next. Our proposed method exceeds previous works' performance by a significant margin without the need for deep reinforcement learning or training separate networks as sidekicks. A key component of our system are the spatial memory maps that make the system aware of the glimpses' orientations (locations in the 360 image). Further, we stress the advantages of retina-like glimpses when the agent's sensor bandwidth and time-steps are limited. Finally, we use our trained model to do classification of the whole scene using only the information observed in the glimpses. 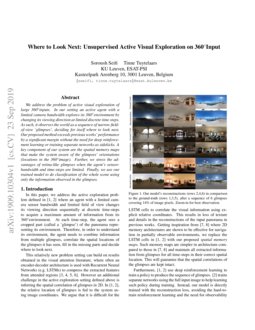 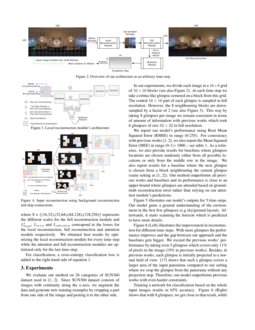 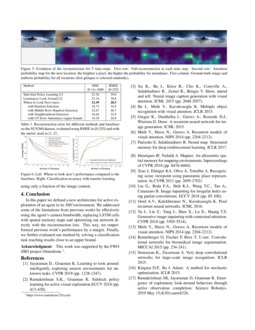 In this paper, we address the active exploration problem defined in [1, 2] where an agent with a limited camera sensor bandwidth and limited field of view changes its viewing direction sequentially at discrete time-steps to acquire a maximum amount of information from its 360°environment. At each time-step, the agent sees a cropped part (called a ’glimpse’) of the panorama representing its environment. Therefore, in order to understand its environment, the agent needs to combine information from multiple glimpses, correlate the spatial locations of the glimpses it has seen, fill in the missing parts and decide where to look next.

This relatively new problem setting can build on results obtained in the visual attention literature, where often an encoder-decoder architecture is used with Recurrent Neural Networks (e.g. LSTMs) to compress the extracted features from attended regions

[3, 4, 5, 6]. However an additional challenge in the active exploration setting defined above is inferring the spatial correlation of glimpses in 2D. In [1, 2], the relative location of glimpses is fed to the system using image coordinates. We argue that it is difficult for the LSTM cells to correlate the visual information using explicit relative coordinates. This results in loss of texture and details in the reconstructions of the input panorama in previous works. Getting inspiration from [7, 8] where 2D memory architectures are shown to be effective for navigation in partially observable environments, we replace the LSTM cells in [1, 2] with our proposed spatial memory maps. Such memory maps are simpler in architecture compared to those in [7, 8] and maintain all extracted information from glimpses for all time-steps in their correct spatial location. This will guarantee that the spatial correlations of the glimpses are kept intact.

Furthermore, [1, 2] use deep reinforcement learning to train a policy to produce the sequence of glimpses. [2] trains separate networks using the full input image to help learning such policy during training. Instead, our model is directly trained with the reconstruction loss, avoiding the hard-to-train reinforcement learning and the need for observability imbalance between training and test time.

Our architecture can be particularly useful for applications where transmitting the whole input image is not possible due to bandwidth limitations. In this case, one could use our architecture to select the areas that make the reconstruction at the destination easier.

Figure 1 shows some of our results on the test data from the SUN360 dataset [9]. Figure 2 illustrates the overall architecture of our network. Since the focus of this paper is not generating photo realistic reconstructions, we did not use any sophisticated method of in-painting for reconstruction. However, combining our architecture with an in-painting method such as [10, 11, 12] can generate even better reconstructions of the input panorama.

The remainder of the paper is organized as follows. In section 2, we define our method. We describe our experimental results in section 3. Section 4 concludes the paper.

- Local Reconstruction Module: We exploit the camera bandwidth more efficiently with the help of retina-like glimpses, as used in the visual attention literature [3, 13]. In this case, the central part of each glimpse is sampled in full resolution while the remaining pixels on each side of the glimpse are downsampled by a factor 2.

We modify a super-resolution architecture known as U-net

[14] to bring these partly down-sampled glimpses to their full resolution in the ’local reconstruction module’, details of which are found in Figure 3.

We use L1 loss between the ground-truth glimpse and reconstructed glimpse at each time-step. The up-sampled glimpses and their corresponding bottleneck features are next passed to the full reconstruction module.

- Full Reconstruction Module: This module fits each up-sampled glimpse in a spatial memory map denoted as fit-in matrix. It has the same dimensions as the input panorama and all its values are initially set to 0. At each time-step, the area corresponding to the glimpse location gets filled with the up-sampled glimpse.

Additionally, we further sample down the bottleneck features for each glimpse to 4×4×8 using average pooling and convolutions. We flatten these features and fit them in a fit-in feature vector

. This partially filled vector of size 4096 keeps our encoded representation for the whole input panorama according to the visited glimpses. We use fully-connected layers on top of this vector to reconstruct a down-sampled version of the input panorama at each step. We denote this reconstruction as our

- Attention Module: Finally, the attention module determines where to look next. The reconstruction loss at each time-step can inform the model about the areas in the input where the model’s representation encodes the least information in the panorama. Therefore, the area with the highest reconstruction loss can be selected for attendance in the next time-step. Our attention module is trained to predict such area at test time. In particular, we divide the image to non-overlapping 16×16

patches (128 image patches in total). We use fully connected layers on top of our fit-in feature vector to predict the probability for each patch to have the highest accumulative reconstruction error. During training, we determine the ground-truth probability for each image patch by summing up the reconstruction loss for all its pixels and normalizing it by the accumulative loss for all pixels in the panorama. We use a sparse softmax cross-entropy loss for optimizing the attention module.

In order to stimulate exploration during training time, we use a multinomial distribution to sample the next location to attend from our predicted probability map. However, at test time we always take the location with highest probability in the probability map.

To evaluate our method in such scenario, we modify our architecture for predicting the scene category for each image after taking a fixed number of glimpses. In one setting we feed the final reconstruction to a classification network (VGG-19 [15]) and train the whole architecture end-to-end to predict the class labels. In another setting, the network attends the locations suggested by the attention module and fits extracted features to a fit-in classification vector. We use fully-connected layers followed by a softmax function on top of this feature vector after visiting the last glimpse to predict the class labels. This way we separate the classification network from the reconstruction network for optimization. Besides, we train a VGG-19 network on the whole input image as an upper-bound.

Optimization: We train our network end-to-end with Adam optimizer [16]

We evaluate our method on 26 categories of SUN360 dataset used in [1, 2]. Since SUN360 dataset consists of images with continuity along the x-axis, we augment the data and generate new training examples by cropping a part from one side of the image and pasting it to the other side.

In our experiments, we divide each image in a 16×8 grid of 16×16 blocks (see also Figure 2). At each time-step we take a retina-like glimpse centered on a block from this grid. The central 16×16 part of each glimpse is sampled in full resolution. However, the 8 neighbouring blocks are downsampled by a factor of 2 (see also Figure 3). This way by taking 8 glimpses per image we remain consistent in terms of amount of information with previous works which took 6 glimpses of size 32×32 in full resolution.

We report our model’s performance using Root Mean Squared Error (RMSE) in range (0-255). For consistency with previous works [1, 2], we also report the Mean Squared Error (MSE) in range (0-1)×1000 – see table 1. As a reference, we also provide results for baselines where glimpses locations are chosen randomly either from all possible locations or only from the middle row in the image. We also report results for a baseline where the next glimpse is chosen from a block neighbouring the current glimpse (same setting as [1, 2]). Our method outperforms all previous works and baselines and its performance is close to an upper-bound where glimpses are attended based on ground-truth reconstruction error rather than relying on our attention module’s predictions.

Figure 5 illustrates our model’s outputs for 5 time-steps. Our model gains a general understanding of the environment in the first few glimpses (e.g sky/ground layout). Afterwards, it starts scanning the horizon which is predicted to have more details.

Figure 6 (Left) illustrates the improvement in reconstruction for different time-steps. With more glimpses the performance improves and the gap between our approach and the baselines gets bigger. We exceed the previous works’ performance by taking even 5 glimpses which covers only 11% of pixels in the image (19% in previous works). Besides, in previous works, each glimpse is initially projected to a normal field of view. [17] shows that such a glimpse covers a larger area of the input panorama compared to our setting where we crop the glimpse from the panorama without any projection step. Therefore, our model outperforms previous works with even harder constraints.

Training a network for classification based on the whole input images results in 65% accuracy. Figure 6 (Right) shows that with 8 glimpses, we get close to that result, while using only a fraction of the image content.

In this paper we defined a new architecture for active exploration of an agent in its 360°environment. We addressed some of the limitations from previous works by effectively using the agent’s camera bandwidth, replacing LSTM cells with spatial memory maps and optimizing our network directly with the reconstruction loss. This way, we outperformed previous work’s performance by a margin. Finally, we further evaluated our method by solving a classification task reaching results close to an upper bound.

This work was supported by the FWO SBO project Omnidrone 111https://www.omnidrone720.com/.