When Two is Worse Than One

This note is concerned with the impact on job latency of splitting a token bucket into multiple sub-token buckets with equal aggregate parameters and offered the same job arrival process. The situation commonly arises in distributed computing environments where job arrivals are rate controlled (each job needs one token to enter the system), but capacity limitations call for distributing jobs across multiple compute resources with scalability considerations preventing the use of a centralized rate control component (each compute resource is responsible for monitoring and enforcing that the job stream it receives conforms to a certain traffic envelope). The question we address is to what extent splitting a token bucket into multiple sub-token buckets that individually rate control a subset of the original arrival process affects job latency, when jobs wait for a token whenever the token bucket is empty upon their arrival. Our contribution is to establish that independent of the job arrival process and how jobs are distributed across compute resources (and sub-token buckets), splitting a token bucket always increases the sum of job latencies in the token buckets, and consequently the average job latency. 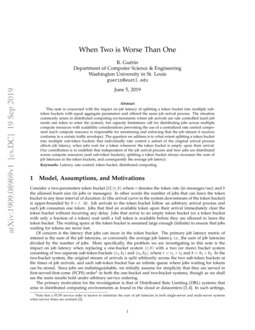 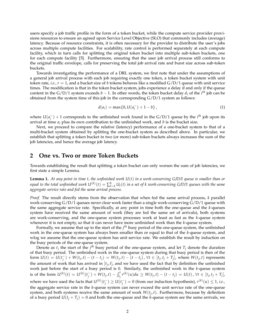 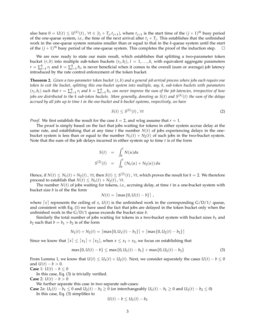 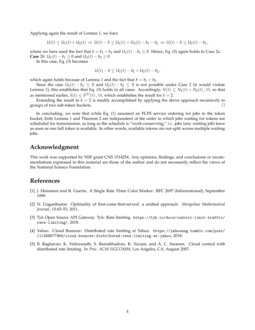 Queueing Systems with Some Versions of Limited Processor Sharing Discipline

Urban Spatial Structure and the Potential for Vehicle Miles Traveled Reduction: The Effects of Accessibility to Jobs within and beyond Employment Sub-centers

Of concern is the latency that jobs can incur in the token bucket. The primary job latency metric of interest is the sum of the job latencies, or conversely the average job latency, i.e., the sum of job latencies divided by the number of jobs. More specifically, the problem we are investigating in this note is the impact on job latency when replacing a one-bucket system (r,b) with a two (or more) bucket system consisting of two separate sub-token buckets (r1,b1) and (r2,b2), where r=r1+r2 and b=b1+b2. In the two-bucket system, the original stream of arrivals is split arbitrarily across the two sub-token buckets at the times of job arrivals, and each sub-token bucket has an infinite queue where jobs waiting for tokens can be stored. Since jobs are indistinguishable, we initially assume for simplicity that they are served in first-served-first-come (FCFS) order111Note that a FCFS service order is known to minimize the sum of job latencies in both single-server and multi-server systems when service times are constant [2]. in both the one-bucket and two-bucket systems, though as we shall see the main results hold under arbitrary service ordering.

The primary motivation for the investigation is that of Distributed Rate Limiting (DRL) systems that arise in distributed computing environments as found in the cloud or datacenters [3, 4]. In such settings, users specify a job traffic profile in the form of a token bucket, while the compute service provider provisions resources to ensure an agreed upon Service Level Objective (SLO) that commonly includes (average) latency. Because of resource constraints, it is often necessary for the provider to distribute the user’s jobs across multiple compute facilities. For scalability, rate control is performed separately at each compute facility, which in turn calls for splitting the original token bucket into multiple sub-token buckets, one for each compute facility [5]. Furthermore, ensuring that the user job arrival process still conforms to the original traffic envelope, calls for preserving the total job arrival rate and burst size across sub-token buckets.

Towards investigating the performance of a DRL system, we first note that under the assumptions of a general job arrival process with each job requiring exactly one token, a token bucket system with unit token rate, i.e., r=1, and a bucket size of b tokens behaves like a modified G/D/1 queue with unit service times. The modification is that in the token bucket system, jobs experience a delay if and only if the queue content in the G/D/1 system exceeds b−1. In other words, the token bucket delay di of the ith job can be obtained from the system time of this job in the corresponding G/D/1 system as follows:

2 One vs. Two or more Token Buckets

Towards establishing the result that splitting a token bucket can only worsen the sum of job latencies, we first state a simple Lemma.

We are now ready to state our main result, which establishes that splitting a two-parameter token bucket (r,b) into multiple sub-token buckets (rl,bl),l=1,…,k, with equivalent aggregate parameters r=∑kl=1rl and b=∑kl=1bl, is never beneficial when it comes to the overall (sum or average) job latency introduced by the rate control enforcement of the token bucket.

Given a two-parameter token bucket (r,b) and a general job arrival process where jobs each require one token to exit the bucket, splitting this one-bucket system into multiple, say, k, sub-token buckets with parameters (rl,bl) such that r=∑kl=1rl and b=∑kl=1bl, can never improve the sum of the job latencies, irrespective of how jobs are distributed to the k sub-token buckets. More generally, denoting as S(t) and S(k)(t) the sum of the delays accrued by all jobs up to time t in the one-bucket and k-bucket systems, respectively, we have

We first establish the result for the case k=2, and wlog assume that r=1.

The proof is simply based on the fact that jobs waiting for tokens in either system accrue delay at the same rate, and establishing that at any time t the number N(t) of jobs experiencing delays in the one-bucket system is less than or equal to the number N1(t)+N2(t) of such jobs in the two-bucket system. Note that the sum of the job delays incurred in either system up to time t is of the form

The number N(t) of jobs waiting for tokens, i.e., accruing delay, at time t in a one-bucket system with bucket size b is of the the form

Since we know that ⌈x⌉≤⌈x1⌉+⌈x2⌉, when x≤x1+x2, we focus on establishing that

In this case, Eq. (3) is trivially verified.

We further separate this case in two separate sub-cases:

Applying again the result of Lemma 1, we have

which again holds because of Lemma 1 and the fact that b=b1+b2.

Extending the result to k>2 is readily accomplished by applying the above approach recursively to groups of two sub-token buckets. ∎

In concluding, we note that while Eq. (1) assumed an FCFS service ordering for jobs in the token bucket, both Lemma 1 and Theorem 2 are independent of the order in which jobs waiting for tokens are scheduled for transmission, as long as the schedule is “work-conserving,” i.e., jobs (any waiting job) leave as soon as one full token is available. In other words, available tokens are not split across multiple waiting jobs.

This work was supported by NSF grant CNS 1514254. Any opinions, findings, and conclusions or recommendations expressed in this material are those of the author and do not necessarily reflect the views of the National Science Foundation.