When Not to Classify: Detection of Reverse Engineering Attacks on DNN Image Classifiers 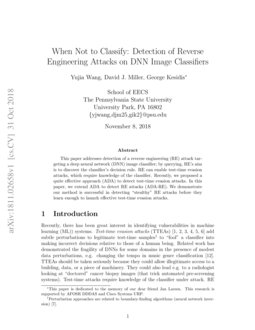 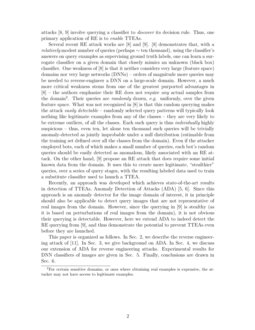 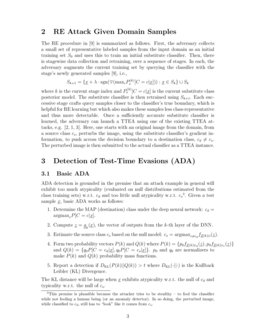 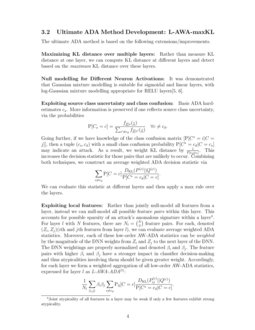 Recently, there has been great interest in identifying vulnerabilities in machine learning (ML)) systems.

Test-time evasion attacks (TTEAs) [1, 2, 3, 4, 5, 6] add subtle perturbations to legitimate test-time samples111Perturbation approaches are related to boundary-finding algorithms (neural network inversion) [7]. to “fool” a classifier into making incorrect decisions relative to those of a human being. Related work has demonstrated the fragility of DNNs for some domains in the presence of modest data perturbations, e.g. changing the tempo in music genre classification [12]. TTEAs should be taken seriously because they could allow illegitimate access to a building, data, or a piece of machinery. They could also lead e.g. to a radiologist looking at “doctored” cancer biopsy images (that trick automated pre-screening systems). Test-time attacks require knowledge of the classifier under attack. RE attacks [8, 9] involve querying a classifier to discover its decision rule. Thus, one primary application of RE is to enable TTEAs.

Several recent RE attack works are [8] and [9]. [8] demonstrates that, with a relatively modest number of queries (perhaps ∼ ten thousand), using the classifier’s answers on query examples as supervising ground truth labels, one can learn a surrogate classifier on a given domain that closely mimics an unknown (black box) classifier. One weakness of [8] is that it neither considers very large (feature space) domains nor very large networks (DNNs) – orders of magnitude more queries may be needed to reverse-engineer a DNN on a large-scale domain. However, a much more critical weakness stems from one of the greatest purported advantages in [8] – the authors emphasize their RE does not require any actual samples from the domain222For certain sensitive domains, or ones where obtaining real examples is expensive, the attacker may not have access to legitimate examples.. Their queries are randomly drawn, e.g. uniformly, over the given feature space. What was not recognized in [8] is that this random querying makes the attack easily detectable

– randomly selected query patterns will typically look nothing like legitimate examples from any of the classes – they are very likely to be extreme outliers, of all the classes. Each such query is thus

highly suspicious – thus, even ten, let alone ten thousand such queries will be trivially anomaly-detected as jointly improbable under a null distribution (estimable from the training set defined over all the classes from the domain). Even if the attacker employed bots, each of which makes a small number of queries, each bot’s random queries should be easily detected as anomalous, likely associated with an RE attack. On the other hand,

[9] propose an RE attack that does require some initial known data from the domain. It uses this to create more legitimate, “stealthier” queries, over a series of query stages, with the resulting labeled data used to train a substitute classifier used to launch a TTEA.

Recently, an approach was developed which achieves state-of-the-art results in detection of TTEAs, Anomaly Detection of Attacks (ADA) [5, 6]. Since this approach is an anomaly detector for the image domain of interest, it in principle should also be applicable to detect query images that are not representative of real images from the domain. However, since the querying in [9] is stealthy (as it is based on perturbations of real images from the domain), it is not obvious their querying is detectable. However, here we extend ADA to indeed detect the RE querying from [9], and thus demonstrate the potential to prevent TTEAs even before they are launched.

2 RE Attack Given Domain Samples

The RE procedure in [9] is summarized as follows. First, the adversary collects a small set of representative labeled samples from the input domain as an initial training set S0 and uses this to train an initial substitute classifier. Then, there is stagewise data collection and retraining, over a sequence of stages. In each, the adversary augments the current training set by querying the classifier with the stage’s newly generated samples [9], i.e.,

ADA detection is grounded in the premise that an attack example in general will exhibit too much atypicality (evaluated on null distributions estimated from the class training sets) w.r.t. cd and too little null atypicality w.r.t. cs333This premise is plausible because the attacker tries to be stealthy – to fool the classifier while not fooling a human being (or an anomaly detector). In so doing, the perturbed image, while classified to cd, still has to “look” like it comes from cs.. Given a test sample x––, basic ADA works as follows:

The ultimate ADA method is based on the following extensions/improvements.

Going further, if we have knowledge of the class confusion matrix

[P[C∗=i|C=j]], then a tuple (cs,cd) with a small class confusion probability P[C∗=cd|C=cs] may indicate an attack. As a result, we weight KL distance by 1P[cd|cs]. This increases the decision statistic for those pairs that are unlikely to occur. Combining both techniques, we construct an average weighted ADA decision statistic via

We can evaluate this statistic at different layers and then apply a max rule over the layers.

Rather than jointly null-model all features from a layer, instead we can null-model all possible feature pairs within this layer. This accounts for possible sparsity of an attack’s anomalous signature within a layer444Joint atypicality of all features in a layer may be weak if only a few features exhibit strong atypicality.. For layer l with N features, there are Nl=(N2) feature pairs. For each, denoted (Zi,Zj)(ith and jth features from layer l), we can evaluate average weighted ADA statistics. Moreover, each of these low-order AW-ADA statistics can be weighted by the magnitude of the DNN weights from Zi and Zj to the next layer of the DNN. The DNN weightings are properly normalized and denoted βi and βj. The feature pairs with higher βi and βj have a stronger impact in classifier decision-making and thus atypicalities involving them should be given greater weight. Accordingly, for each layer we form a weighted aggregation of all low-order AW-ADA statistics, expressed for layer l as L-AWA-ADA(l):

to all neurons in the next layer,

l+1, normalized by the maximum such sum over all features in layer l. 1/Nl is a necessary normalizer to compare distance statistics across layers fairly, since different layers have different numbers of feautures (neurons). Again we apply a max-KL rule on L-AWA-ADA(l) statistics, with the resulting method dubbed L-AWA-ADA-maxKL. This is the ultimate ADA detection method (achieving the best results), described in more detail in [5, 6].

Since in RE attacks the attacker submits batches of query images to the classifier, we modify L-AWA to jointly exploit batches of images in seeking to detect attacks (in this case RE query attacks, not TTEA attacks). Several schemes for aggregating L-AWA-ADA decision statistics, produced for individual images in a batch, are investigated:

This last scheme will be seen to perform the best.

We experimented on MNIST [10]. This is a dataset with 60,000 grayscale images, representing the digits ‘0’ through ‘9’. There are 50,000 training images and 10,000 test images. As a DNN classifier, we used Lenet-5 [11]. We also used the Lenet-5 structure for training the RE attacker’s substitute network. For S0 we used 150 MNIST samples (15 from each class). We applied 5 stages of retraining (6 training stages) of the substitute DNN and chose λ=0.1. The number of queries generated by the 5 stages were: 150, 300, 600, 1200 and 2400. Fast gradient sign method (FGSM) is used to craft adversarial samples. We used mini-batches of size 5 in experiments. Two maxpooling layers and the penultimate layer were used in generating the ADA detection statistics.For evaluating RE detections ROC-AUC, we used two data sources: the 10,000 (non-query) test images and the query images produced in a given stage. For a given batch size, to crate a pool of samples used for evaluating ROC-AUC, we randomly drew batches from the two sources many times with replacement. The number of samples created was batch-size dependent. As one example for batch size 20, we created 427 non-query batches (samples) and 361 query batches (samples).

We evaluated detection accuracy for stages 4-6 in our experiments. The reason is as follows: the substitute classifier’s accuracy and the resulting success rate of TTEA attacks both grow with the stage number; by stage 4, these accuracies are 0.69 and 0.8, respectively, as shown in Figure 3. Figure 1 shows that good detection accuracy is achieved using the arithmetic averaging scheme, with the ROC AUC increasing with batch size and with the attack stage, as expected (slightly inferior performance is achieved by max rule). However, the ROC AUC appears to asymptote at about 0.95, which we would not expect – we would hope perfect detection accuracy could be approached with increasing batch size, especially in the latter stages. This better behaviour is exhibited by the mini-batch scheme with union detection rule in Figure 2. Thus, this latter aggregation scheme is the most promising one.

We have developed an anomaly detection scheme that is very effective at detecting “stealthy” RE attacks on DNN image classifiers. This is potentially important to protect black box classifier information and to prevent TTEAs. Detection of other types of attacks, for other application domains, may be considered in future.