When Is Amplification Necessary for Composition in Randomized Query Complexity? 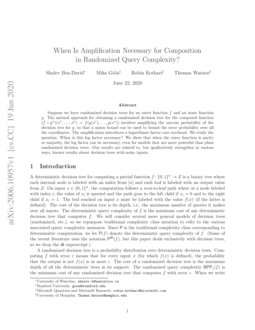 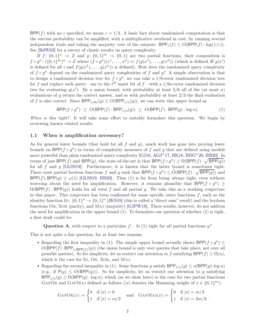 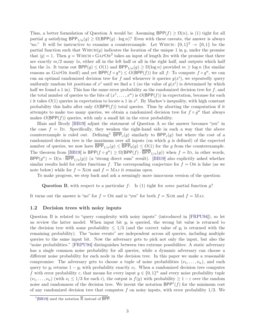 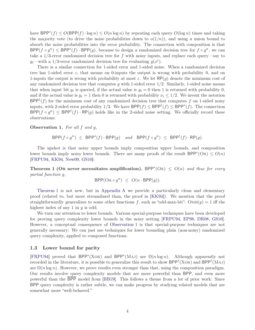 On Learning and Testing Decision Tree

In this paper, we study learning and testing decision tree of size and d...
Nader H. Bshouty, et al. ∙

We prove that for every parity decision tree of depth d on n variables, ...
Uma Girish, et al. ∙

In this paper we propose a synergistic melting of neural networks and de...
Randall Balestriero, et al. ∙

f with error ε means that for every input x (for which f(x) is defined), the probability that the output is not f(x) is at most ε. The cost of a randomized decision tree is the maximum depth of all the deterministic trees in its support. The randomized query complexity BPPε(f) is the minimum cost of any randomized decision tree that computes f with error ε. When we write BPP(f) with no ε specified, we mean ε=1/3. A basic fact about randomized computation is that the success probability can be amplified, with a multiplicative overhead in cost, by running several independent trials and taking the majority vote of the outputs: BPPε(f)≤O(BPP(f)⋅log(1/ε)). See [BdW02] for a survey of classic results on query complexity.

If f:{0,1}n→Z and g:{0,1}m→{0,1} are two partial functions, their composition is f∘gn:({0,1}m)n→Z where (f∘gn)(x1,…,xn)\coloneqqf(g(x1),…,g(xn)) (which is defined iff g(xi) is defined for all i and f(g(x1),…,g(xn)) is defined). How does the randomized query complexity of f∘gn depend on the randomized query complexities of f and g? A simple observation is that to design a randomized decision tree for f∘gn, we can take a 1/6-error randomized decision tree for f and replace each query—say to the ith input bit of f—with a 1/6n-error randomized decision tree for evaluating g(xi). By a union bound, with probability at least 5/6 all of the (at most n) evaluations of g return the correct answer, and so with probability at least 2/3 the final evaluation of f is also correct. Since BPP1/6n(g)≤O(BPP1/n(g)), we can write this upper bound as

When is this tight? It will take some effort to suitably formulate this question. We begin by reviewing known related results.

1.1 When is amplification necessary?

As for general lower bounds (that hold for all f and g), much work has gone into proving lower bounds on BPP(f∘gn) in terms of complexity measures of f and g that are defined using models more powerful than plain randomized query complexity [GJ16, AGJ+17, BK18, BDG+20, BB20]. In terms of just BPP(f) and BPP(g), the state-of-the-art is that BPP(f∘gn)≥Ω(BPP(f)⋅√BPP% (g)) for all f and g [GLSS19]. Furthermore, it is known that the latter bound is sometimes tight: There exist partial boolean functions f and g such that BPP(f∘gn)≤˜O(BPP(f)⋅√BPP(g)) and BPP(f),BPP(g)≥ω(1) [GLSS19, BB20]. Thus (1) is far from being always tight, even without worrying about the need for amplification. However, it remains plausible that BPP(f∘gn)≥Ω(BPP(f)⋅BPP(g)) holds for all total f and all partial g. We take this as a working conjecture in this paper. This conjecture has been confirmed for some specific outer functions f, such as the identity function \textscId:{0,1}n→{0,1}n [JKS10] (this is called a “direct sum” result) and the boolean functions Or, Xor (parity), and Maj (majority) [GJPW18]. These results, however, do not address the need for amplification in the upper bound (1). To formulate our question of whether (1) is tight, a first draft could be:

This is not quite a fair question, for at least two reasons:

Thus, a better formulation of Question A would be: Assuming BPP(f)≥Ω(n), is (1) tight for all partial g satisfying BPP1/n(g)≥Ω(BPP(g)⋅logn)? Even with these caveats, the answer is always “no.” It will be instructive to examine a counterexample. Let \textscWhich:{0,1}2→{0,1} be the partial function such that \textscWhich(y) indicates the location of the unique 1 in y, under the promise that |y|=1. Then g=\textscWhich∘\textscGapOr2 takes an input of length 2m with the promise that there are exactly m/2 many 1s, either all in the left half or all in the right half, and outputs which half has the 1s. It turns out BPP(g)≤O(1) and BPP1/n(g)≥Ω(logn) provided m≥logn (for similar reasons as GapOr itself) and yet BPP(f∘gn)≤O(BPP(f)) for all f: To compute f∘gn, we can run an optimal randomized decision tree for f and whenever it queries g(xi), we repeatedly query uniformly random bit positions of xi until we find a 1 (so the value of g(xi) is determined by which half we found a 1 in). This has the same error probability as the randomized decision tree for f, and the total number of queries to the bits of (x1,…,xn) is O(BPP(f)) in expectation, because for each i it takes O(1) queries in expectation to locate a 1 in xi. By Markov’s inequality, with high constant probability this halts after only O(BPP(f)) total queries. Thus by aborting the computation if it attempts to make too many queries, we obtain a randomized decision tree for f∘gn that always makes O(BPP(f)) queries, with only a small hit in the error probability.

To make progress, we step back and ask a seemingly more innocuous version of the question:

It turns out the answer is “no” for f=\textscOr and is “yes” for both f=\textscXor and f=\textscMaj.

BPP∗(\textscOr)≤O(n) and thus for every partial function g,

Theorem is not new, but in Appendix A we provide a particularly clean and elementary proof (related to, but more streamlined than, the proof in [KK94]). We mention that the proof straightforwardly generalizes to some other functions f

[FRPU94] proved that BPP∗(\textscXor) and BPP∗(\textscMaj) are Ω(nlogn). Although apparently not recorded in the literature, it is possible to generalize this result to show BPP†(\textscXor) and BPP†(\textscMaj) are Ω(nlogn). However, we prove results even stronger than that, using the composition paradigm. Our results involve query complexity models that are more powerful than BPP, and even more powerful than the ¯¯¯¯¯¯¯¯BPP model from [BB19]. This follows a theme from a lot of prior work: Since BPP query complexity is rather subtle, we can make progress by studying related models that are somewhat more “well-behaved.”

We first consider the last of these models. PostBPPε(f) is the minimum cost of any randomized decision tree such that on every input x (for which f(x) is defined), the probability of outputting ⊥ is <1, and the probability of outputting f(x) is ≥1−ε conditioned on not outputting ⊥. Trivially, PostBPP(f)≤BPP(f). In fact, the PostBPP model is much more powerful than plain randomized query complexity; for example (noted in [GLM+16]) it can efficiently compute the aforementioned odd-max-bit function: PostBPP(\textscOmb)≤1.

In Section 2 we prove something qualitatively much stronger than BPP∗(\textscXor)≥Ω(nlogn):

WAPPε(f) is the minimum cost of any randomized decision tree such that for some t>0, on input x the probability of outputting 1 is in the range [(1−ε)t,t] if f(x)=1, and in the range [0,εt] if f(x)=0. The ε subscript should always be specified, because unlike BPP and PostBPP, WAPP is not amenable to efficient amplification of the error parameter ε [GLM+16]. For every constant 0<ε<1/2, we have PostBPP(f)≤O(WAPPε(f))≤O(% BPP(f)).

WAPP-type query complexity has several aliases, such as “approximate conical junta degree” and “approximate query complexity in expectation,” and it has recently played a central role in various randomized query (and communication) complexity lower bounds [KLdW15, GLM+16, GJ16, GJPW18]. One can think of WAPP as a nonnegative version of approximate polynomial degree (which corresponds to the class AWPP); in other words, it is a classical analogue of the polynomial method used to lower bound quantum algorithms.

For the noisy input setting, WAPP∗ and WAPP† are defined in the natural way, and WAPPε(f∘gn)≤WAPP∗ε(f)⋅BPP(g) and WAPPε(f∘gn)≤WAPP†ε(f)⋅RP(g) hold like in Observation. We prove the following theorem, which shows that WAPP sometimes requires amplification, even in the one-sided noise setting.

For some partial function g, namely g=\textscGapOr with m≥logn, and some constant ε>0,

This theorem should be contrasted with the work of Sherstov about making polynomials robust to noise [She13]. In that work, Sherstov showed that approximate polynomial degree never requires a log factor in the noisy input setting, nor in composition. That is to say, he improved the simple bound AWPP∗(f)≤O(AWPP(f)⋅logn) to AWPP∗(f)≤O(AWPP(f)) for all Boolean functions f, and showed AWPP(f∘gn)≤O(AWPP(f)⋅AWPP(g)). In contrast, for conical juntas (nonnegative linear combinations of conjunctions), Theorem shows that in a strong sense, the simple bound WAPP∗ϵ(f)≤O(WAPPδ(f)⋅logn) (for all constants 0<δ<ε<1/2 and total Boolean functions f) cannot be improved: WAPP†ε(f)≥Ω(WAPP0(f)⋅logn) for some constant ε and some total f, namely f=\textscMaj. Thus unlike polynomials, conical juntas cannot be made robust to noise.

Our proof of Theorem (in Section 3) introduces some technical ideas that may be useful for other randomized query complexity lower bounds.

By a simple reduction, Theorem for g=\textscGapOr implies the same for g=\textscGapMaj (with BPP(g)=1 instead of RP(g)=1 at the end of the statement), but we do not know of a simpler direct proof for the latter result. Theorem cannot be strengthened to have PostBPP in place of WAPP, because PostBPP(\textscMaj∘\textscGapMajn)≤O(n). However, Theorem does hold with Xor in place of Maj, by the same proof.

We first discuss a standard technique for proving randomized query complexity lower bounds, which will be useful in the proof of Theorem. For any conjunction C:{0,1}k→{0,1} and distribution D over {0,1}k, we write C(D)\coloneqqEx∼D[C(x)]=Px∼D[C(x)=1]. The number of literals in a conjunction is called its width.

Abbreviate PostBPPε(h) as r. Fix a randomized decision tree of cost r computing h with error ε conditioned on not aborting, and assume w.l.o.g. that for each outcome of the randomness, the corresponding deterministic tree is a perfect tree with 2r leaves, all at depth r. Consider the probability space where we sample input x from the mixture 12D0+12D1, sample a deterministic decision tree T as an outcome of the randomized decision tree, and sample a uniformly random leaf ℓ of T. Let A

be the indicator random variable for the event that

as the uniform distribution over

Hence, our result can be restated as follows.

Using strong LP duality (as in [GL14]), it can be seen that Fact is a tight lower bound method up to constant factors: PostBPPε(h)≥Ω(c) iff it is possible to prove this via Fact by exhibiting “hard input distributions” D0 and D1 (as we did for GapMaj in Fact). Since this was the only property of g used in the proof of Theorem 1.3, this implies that BPP(\textscXor∘gn)≥PostBPP(\textscXor∘gn)≥Ω(n⋅PostBPP1/n(g)) holds for all g, as we mentioned in Section 1.3.

We first discuss a standard technique for proving randomized query complexity lower bounds, which will be useful in the proof of Theorem. For any conjunction C:{0,1}k→{0,1} and distribution D over {0,1}k, we write C(D)\coloneqqEx∼D[C(x)]=Px∼D[C(x)=1]. The number of literals in a conjunction is called its width.

The key calculation underlying the proof of Fact is encapsulated in the following:

Both cases yield a contradiction. ■

Abbreviate WAPPε(h) as r. Fix a randomized decision tree of cost r computing h with error parameter ε and threshold t>0 (from the definition of WAPP), and assume w.l.o.g. that for each outcome of the randomness, the corresponding deterministic tree is a perfect tree with 2r leaves, all at depth r. Consider the probability space where we sample a deterministic decision tree T as an outcome of the randomized decision tree, and sample a uniformly random leaf ℓ of T. For any outcome T,ℓ, let CT,ℓ be the conjunction of width r such that CT,ℓ(x)=1 iff T(x) reaches ℓ. Define three joint random variables P0, P<span class="mjx-char MJXc-TeX-main-R" style="p