When Does Non-Orthogonal Tensor Decomposition Have No Spurious Local Minima?

We study the optimization problem for decomposing d dimensional fourth-order Tensors with k non-orthogonal components. We derive deterministic conditions under which such a problem does not have spurious local minima. In particular, we show that if κ = λ_max/λ_min < 5/4, and incoherence coefficient is of the order O(1/√(d)), then all the local minima are globally optimal. Using standard techniques, these conditions could be easily transformed into conditions that would hold with high probability in high dimensions when the components are generated randomly. Finally, we prove that the tensor power method with deflation and restarts could efficiently extract all the components within a tolerance level O(κ√(kτ^3)) that seems to be the noise floor of non-orthogonal tensor decomposition. 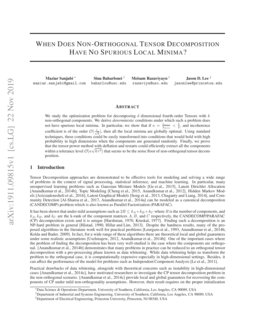 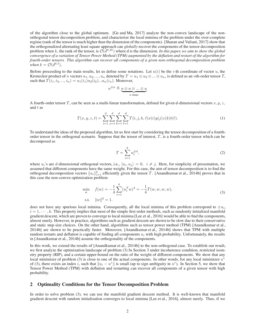 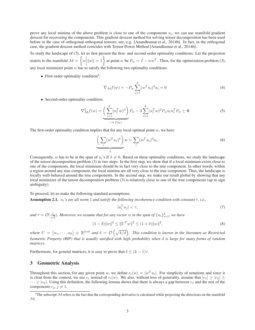 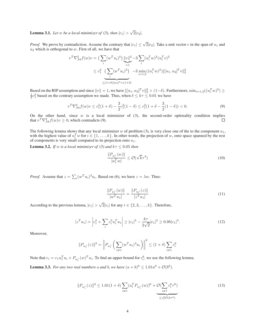 In this paper, we provide local and global convergence guarantees for re...
Rong Ge, et al. ∙

In this paper we study the training dynamics for gradient flow on over-p...
Rong Ge, et al. ∙

Statistical tools to assess the reliability of self-organizing maps

We study an optimization problem related to the approximation of given d...
Felix Black, et al. ∙

Tensor Decomposition approaches are demonstrated to be effective tools for modeling and solving a wide range of problems in the context of signal processing, statistical inference, and machine learning. In particular, many unsupervised learning problems such as Gaussian Mixture Models

It has been shown that under mild assumptions such as 2R≤kA+kB+kC where R is the number of components, and kA,kB, and kC are the k-rank of the component matrices A,B, and C respectively, the CANDECOMP/PARAFAC (CP) decomposition exists and it is unique (harshman1970foundations; kruskal1977three). Finding such a decomposition is an NP-hard problem in general (haastad1990tensor; hillar2013most). Despite the hardness results, many of the proposed algorithms in the literature work well for practical problems (leurgans1993decomposition; tensor_decomp_latent_anandkumar2014; kolda2009tensor). In fact, for a wide range of these algorithms there are theoretical local and global guarantees under some realistic assumptions (uschmajew2012local; tensor_decomp_latent_anandkumar2014). One of the important cases where the problem of finding the decomposition has been very well-studied is the case where the components are orthogonal. (tensor_decomp_latent_anandkumar2014)

demonstrates that many problems in practice can be reduced to an orthogonal tensor decomposition with a pre-processing phase known as data whitening. While data whitening helps us transform the problem to the orthogonal case, it is computationally expensive especially in high-dimensional settings. Besides, it can affect the performance of the model for problems such as Independent Component Analysis

Practical drawbacks of data whitening, alongside with theoretical concerns such as instability in high-dimensional cases (anandkumar2014guaranteed), have motivated researchers to investigate the CP tensor decomposition problem in the non-orthogonal scenario. (anandkumar2014guaranteed) provide local and global guarantees for recovering the components of CP under mild non-orthogonality assumptions. However, their result requires on the proper initialization of the algorithm close to the global optimum. (ge2017optimization) analyze the non-convex landscape of the non-orthogonal tensor decomposition problem, and characterize the local minima of the problem under the over-complete regime (rank of the tensor is much higher than the dimension of the components). (non-orthogona_ALS_sharan_valiant_17) show that the orthogonalized alternating least square approach can globally recover the components of the tensor decomposition problem when k, the rank of the tensor, is O(d0.25) where d is the dimension. In this paper, we aim to show the global convergence of a variation of Tensor Power Method (TPM) augmented by the deflation and restart of the algorithm for fourth-order tensors. This algorithm can recover all components of a given non-orthogonal decomposition problem when k=O(d0.5).

Before proceeding to the main results, let us define some notations. Let u(i) be the i

, can be seen as a multi-linear transformation, defined for given d-dimensional vectors

where ui’s are d-dimensional orthogonal vectors, i.e., ⟨ui,uj⟩=0,  i≠j. Here, for simplicity of presentation, we assumed that different components have the same weight. For this case, the aim of tensor decomposition is to find the orthogonal decomposition vectors {ui}ki=1 efficiently given the tensor T. (tensor_decomp_latent_anandkumar2014) proves that in this case the non-convex optimization problem

does not have any spurious local minima. Consequently, all the local minima of this problem correspond to ±ui, i=1,⋯,k. This property implies that most of the simple first order methods, such as randomly initialized manifold gradient descent, which are proven to converge to local minima (GD_local_min_lee2016) would be able to find the components, almost surely. However, in practice, algorithms such as gradient descent are shown to be slow due to their conservative and static step-size choices. On the other hand, algorithms such as tensor power method (TPM) (tensor_decomp_latent_anandkumar2014) are shown to be practically faster. Moreover, (tensor_decomp_latent_anandkumar2014) shows that TPM with multiple random restarts and deflation is capable of finding all components ui with high probability. Unfortunately, the results in (tensor_decomp_latent_anandkumar2014) assume the orthogonality of the components.

In this work, we extend the results of (tensor_decomp_latent_anandkumar2014) to the non-orthogonal case. To establish our result, we first analyze the optimization landscape of problem (3) In Section 3 under incoherence condition, restricted isometry property (RIP), and a certain upper-bound on the ratio of the weight of different components. We show that any local minimizer of problem (3) is close to one of the actual components. In other words, for any local minimizer u∗ of (3), there exists an index i, such that ∥ui−u∗∥ is small (up to sign ambiguity in u∗). In Section 5, we show that Tensor Power Method (TPM) with deflation and restarting can recover all components of a given tensor with high probability.

To study the landscape of (3), let us first present the first- and second-order optimality conditions. Let the projection matrix to the manifold M={w∣∣∣∥w∥=1} at point w be Pw=I−wwT. Then, for the optimization problem (3), any local minimizer point w has to satisfy the following two optimality conditions:

The first-order optimality condition implies that for any local optimal point w, we have

To proceed, let us make the following standard assumptions:

ui’s are all norm 1 and satisfy the following incoherence condition with constant τ, i.e.,

where U=[u1,⋯,uk]∈Rd×k and δ=O(√k/d). This condition is known in the literature as Restricted Isometric Property (RIP) that is usually satisfied with high probability when d is large for many forms of random matrices.

Furthermore, for general matrices, it is easy to prove that δ≤(k−1)τ.

Throughout this section, for any given point w, we define ci(w)=|wTui|. For simplicity of notations and since it is clear from the context, we use ci instead of ci(w). We also, without loss of generality, assume that |c1|≥|c2|≥⋯≥|ck|. Using this definition, the following lemma shows that there is always a gap between c1 and the rest of the components cj, j≠1.

We prove by contradiction. Assume the contrary that |c1|≤√2|c2|. Take a unit vector v in the span of u1 and u2 which is orthogonal to w. First of all, we have that

On the other hand, since w is a local minimizer of (3), the second-order optimality condition implies that vT∇2Mf(w)v≥0, which contradicts (9). ∎

The following lemma shows that any local minimizer w of problem (3), is very close one of the to the component u1, with the highest value of uTiw for i∈{1,…,k}. In other words, the projection of w, onto space spanned by the rest of components is very small compared to its projection onto u1.

Note that ci=c1uT1ui+Pu⊥1(w)Tui. To find an upper-bound for c6i, we use the following lemma.

Note that in the case where the components are randomly generated with dimension d our result shows that when k≤O(√d) there are no spurious local minima.

4 Extension to the Non-equally Weighted Scenario

In this section, we extend the result of the previous section to the case when the tensor decomposition components have not equal weights. In this scenario, the tensor of interest T is in the form of:

Thus, the optimization problem (3) turns to:

Let λmax and λmin be the maximum and minimum values among {λi}ki=1, respectively. The following theorem demonstrates that under an additional assumption on the ratio of λmax to λmin, any local minimizer of the optimization problem (17) is very close to one of the actual components ui.

We leave the optimality conditions of problem (17), the extension of lemma 3.1, lemma 3.2, and the proof of the above theorem to appendix D.

The landscape analysis in Section 3 demonstrates that to recover at least one of the true components ui of a given tensor T, with the error of at most O(κ√kτ3), it suffices to find any local optimum of problem (17). To recover the other components of T, we can deflate the obtained component from T, and find a local optimizer of problem (17) for the deflated tensor. However, the introduced deflation error could potentially make the problem of finding the remaining ui components difficult. In Section 5.1 we show that TPM can tolerate error residuals from deflation if it is well-initialized. In other words, TPM can recover all ui’s within a noise floor of O(κ√kτ3). Similar to the geometric result, our convergence guarantee for TPM with "good" initialization is deterministic.

Finally, in Section 5.2, we provide a probabilistic argument to show that when d is large after restarting TPM randomly for L=poly(k,d) times, with high probability, we obtain a "good" initialization. This concludes that TPM with restarts and deflation can efficiently find all ui’s within some noise floor O(√kτ3).

5.1 Convergence of Well-initialized TPM with Deflation

Tensor Power Method is one of the most widely used algorithms for solving tensor decomposition problems. For a given tensor T, and vectors x,y, and z, consider the following mapping:

where ei is the i-th standard unit vector.

Assume that a tensor T and initialization w0 is given. At each iteration, TPM applies vector-valued mapping (18) to current w, which is initialized to w0. Then, it normalizes the resulted vector, and update λ, by applying mapping (1) to w. The details of Tensor Power Method are summarized in Algorithm 1.

The following theorem shows that when kτ is small enough, applying algorithm 1 to a deflated version of tensor T can recover all ui components.

Fix 1≤i≤k. Assume that we have access to ^uj∈Rd and ^λj∈R, j=1,⋯,i−1 such that there are appropriate absolute constants c1 and c2 where:

A similar result can be obtained when the original tensor T is in the form of T=∑ki=1λiu⊗4i, for λ1≥⋯≥λk>0.

In Section 5.1 we proved that TPM is effective in finding the components of T when applied on deflated tensors sequentially and with good enough initialization. In this section we prove that we can obtain such a good initialization by doing multiple random restart in each iteration. Algorithm 2 describes Tensor Power Method augmented by multiple random restarts at each iteration (TPMR).

TPMR calls TPM with multiple restarts on its inside loop. Thus, to prove the effectiveness of TMPR algorithm, it suffices to find good initialization points for TPM using random restarts. The following theorem states such a result.

For any small threshold η>0, if we sample L uniform vectors from M such that L satisfies

then, with probability 1−η, at least one of the samples vℓ∈{v1,⋯,vL} will satisfy:

To make sure that the good initialization condition is satisfied throughout the for loop in TPMR Algorithm 2 with probability η0, we need to plug in η=η0/k in Theorem 5.3.

where the last step follows from |ci|≤1.

Thus, we can conclude that

The proof of the first part is very simple and only uses the the results of Lemma A.1 and the fact that ui’s satisfy the RIP condition.

The rest of the proof is also simple arithmetic. ∎

For the second term

For the third term we have

For the fourth term

And for the last term we have

Finally the bound could be obtained by adding all these bounds.

Now let us prove a recursive bound that we can use for the proving our final result.