When Do Introspection Axioms Matter for Multi-Agent Epistemic Reasoning? 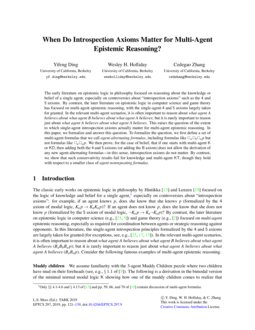 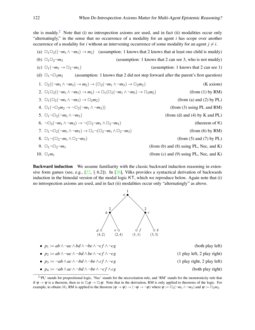 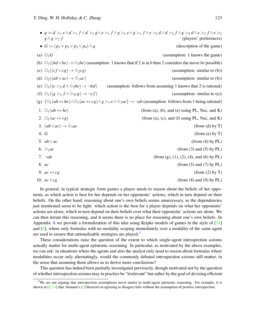 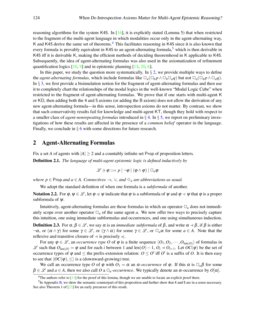 Proceedings Eighteenth Conference on Theoretical Aspects of Rationality and Knowledge

Interactions between Knowledge and Time in a First-Order Logic for Multi-Agent Systems: Completeness Results

We assume familiarity with the 3-agent Muddy Children puzzle where two children have mud on their foreheads (see, e.g., § 1.1 of [6]). The following is a derivation in the bimodal version of the minimal normal modal logic K showing how one of the muddy children comes to realize that she is muddy.222‘PL’ stands for propositional logic, ‘Nec’ stands for the necessitation rule, and ‘RM’ stands for the monotonicity rule that if φ→ψ is a theorem, then so is □_iφ→□_iψ. Note that in the derivation, RM is only applied to theorems of the logic. For example, to obtain (4), RM is applied to the theorem (φ→ψ)→(¬ψ→¬φ) where φ:=□_2(¬m_1∧¬m_3) and ψ:=□_2m_2. Note that (i) no introspection axioms are used, and in fact (ii) modalities occur only “alternatingly,” in the sense that no occurrence of a modality for an agent i has scope over another occurrence of a modality for i without an intervening occurrence of some modality for an agent j≠i.

We assume familiarity with the classic backward induction reasoning in extensive form games (see, e.g., [23, § 6.2]). In [27], Vilks provides a syntactical derivation of backwards induction in the bimodal version of the modal logic KT, which we reproduce below. Again note that (i) no introspection axioms are used, and in fact (ii) modalities occur only “alternatingly” as above.

In general, in typical strategic form games a player needs to reason about the beliefs of her opponents, as which action is best for her depends on her opponents’ actions, which in turn depend on their beliefs. On the other hand, reasoning about one’s own beliefs seems unnecessary, as the dependencies just mentioned seem to be tight: which action is the best for a player depends on what her opponents’ actions are alone, which in turn depend on their beliefs over what their opponents’ actions are alone. We can then iterate this reasoning, and it seems there is no place for reasoning about one’s own beliefs. In Appendix A we provide a formalization of this idea using Kripke models of games in the style of [25] and [5], where only formulas with no modality scoping immediately over a modality of the same agent are used to ensure that rationalizable strategies are played.333We are not arguing that introspection assumptions never matter in multi-agent epistemic reasoning. For example, it is shown in [9, 19] that Aumann’s [2] theorem on agreeing to disagree fails without the assumption of positive introspection.

These considerations raise the question of the extent to which single-agent introspection axioms actually matter for multi-agent epistemic reasoning. In particular, as motivated by the above examples, we can ask: in situations where the agents and also the analyst only need to reason about formulas where modalities occur only alternatingly, would the commonly debated introspection axioms still matter, in the sense that assuming them allows us to derive more conclusions?

This question has indeed been partially investigated previously, though motivated not by the question of whether introspection axioms may in practice be “irrelevant” but rather by the goal of devising efficient reasoning algorithms for the system K45. In [17], it is explicitly stated (Lemma 5) that when restricted to the fragment of the multi-agent language in which modalities occur only in the agent-alternating way, K and K45 derive the same set of theorems.444The authors refer to [12] for the proof of this lemma, though we are unable to locate an explicit proof there. This facilitates reasoning in K45 since it is also known that every formula is provably equivalent in K45 to an agent-alternating formula,555In Appendix B, we show the semantic counterpart of this proposition and further show that 4 and 5 are in a sense necessary. See also Theorem 1 of [24] for an early precursor of this result. which is then derivable in K45 iff it is derivable K, making the efficient methods of deciding theoremhood in K applicable to K45. Subsequently, the idea of agent-alternating formulas was also used in the axiomatization of refinement quantification logics [11, 10] and in epistemic planning [15, 21, 7].

In this paper, we study the question more systematically. In § 2, we provide multiple ways to define the agent-alternating formulas, which include formulas like □_a(□_bp∧□_b□_aq) but not □_a(□_bp∧□_aq). In § 3, we first provide a bisimulation notion for the fragment of agent-alternating formulas and then use it to completely chart the relationships of the modal logics in the well-known “Modal Logic Cube” when restricted to the fragment of agent-alternating formulas. We prove that if one starts with multi-agent K or KD, then adding both the 4 and 5 axioms (or adding the B axiom) does not allow the derivation of any new agent-alternating formula—in this sense, introspection axioms do not matter. By contrast, we show that such conservativity results fail for knowledge and multi-agent KT, though they hold with respect to a smaller class of agent-nonrepeating formulas introduced in § 4. In § 5, we report on preliminary investigations of how these results are affected in the presence of a common belief operator in the language. Finally, we conclude in § 6 with some directions for future research.

Fix a set A of agents with |A|≥2 and a countably infinite set Prop of proposition letters.

The language of multi-agent epistemic logic is defined inductively by

where p∈Prop and a∈A. Connectives →, ∨, and ◊_a are abbreviations as usual.

We adopt the standard definition of when one formula is a subformula of another.

Intuitively, agent-alternating formulas are those formulas in which an operator □_a does not immediately scope over another operator □_a of the same agent a. We now offer two ways to precisely capture this intuition, one using immediate subformulas and occurrences, and one using simultaneous induction.

Assuming a,b,c are different elements in A, examples of agent-alternating formulas include:

We now give an equivalent inductive definition of the set of agent-alternating formulas.

Define a family {L_−a}_a∈A of languages through the following simultaneous induction:

It is not hard to verify that the two definitions above are equivalent, suggesting that our formal definitions captures the intended intuition. Due to limited space, we omit the proof of this equivalence, but the idea is simply to examine the parsing trees of formulas.

We now investigate which logics are indistinguishable by formulas in L_alt. For any normal modal logic L (defined as a set of formulas in L satisfying the usual closure properties), let L|_alt:=L∩L_alt. Then the general question is: for which modal logics L and L′ are L|_alt and L′|_alt the same?

More specifically, since we are mainly interested in the introspection axioms 4 and 5, we focus on the logics appearing in the classic modal logic cube shown in Figure 2 below.666Figure 2 is reproduced from [8]. Our main result is that the two shaded areas in Figure 2 are collapsed in L_alt but no other logics are. To establish this result, we need to first develop bisimulation and unraveling concepts for agent-alternating formulas.

For convenience, we consider alt as an object not in A. Also for any set L′ of formulas, M,u≡_L′N,v means that for all φ∈L′, M,u⊨φ iff N,v⊨φ.

An agent-alternating bisimulation family between two models M and N is a family of binary relations {⇆_a}_a∈A∪{alt} between M and N such that for every a∈A∪{alt} and every u∈M and v∈N such that u⇆_av:

Let Alt(M) denote the set of all agent alternating unraveling of M. Then for every N∈Alt(M), we define a family of binary relations between M and N, which we denote as {PN_a}_a∈A∪{alt}, by

Immediate from Definition 3.4 and the recursive structure of L_alt as defined in Definition 2.6. ∎

Now we can formally state our main result.

Among the systems displayed in Figure 2:

The results are summarized in Figure 2, where systems in the same shaded region in Figure 2 collapse.

Now let N=⟨S,{R_a}_a∈A,V⟩ be constructed by adding to the definition of being in Alt(M) as in Definition 3.4 the following:

Now we can show that N,⟨⟨alt,u⟩⟩ satisfies all the requirements. It is not hard to see that if M is serial, then so is N. The key observation is that for any s∈S, letting ⟨a,w⟩=s_len(s), R_a(s) must include s, and R_b(s) for any b∈A∖{s} must be nonempty since R_bM(w) is nonempty. Hence we are done with (1). To see that for every a∈A, R_a is transitive and Euclidean, note that for any s∈S, letting ⟨x,w⟩=s_len(s), we have the following:

Adding the above two points together, we have shown that for every s∈S and t∈R_a(s), R_a(t)=R_a(s). This is precisely transitivity plus Euclideanness.

By Lemma 3.5, M,u≡_L_altN,⟨⟨alt,u⟩⟩ since {P_aN}_a∈A∪{alt} is an agent-alternating bisimulation family and uP_altN⟨⟨alt,u⟩⟩. Thus, all three requirements are satisfied, so we are done. ∎

Following the strategy of the proof of Proposition 3.7, we only need to show that for every pointed model M,u, there exists an agent-alternating unraveling N=⟨S,{R_a}_a∈A,V⟩ of M such that for every a∈A, R_a is symmetric.

Putting the above two points together, R_a is symmetric, so we are done. ∎

Let a,b be two different elements in A. In B (=KTB), we have the following theorems.

Now the last formula, formula (4), is agent-alternating. However, ⊬_S4(4). Using soundness, it is enough to find an S4 model refuting (4). Consider the following model:

By focusing on the restriction of M to a and b, respectively, it is easy to see that M is based on an S4 frame. Indeed, the accessibility relation for b is even an equivalence relation. Now, M,w_1⊨◊_a□_b□_ap since M,w_2⊨□_b□_ap. Also we have M,w_1⊭p. Hence M,w_1⊭(4), and thus ⊬_S4(4). This shows that B|_alt∖S4|_alt is nonempty.

In the same spirit, ◊_a□_b◊_ap→◊_ap∈S4|_alt∖B|_alt. The derivation of ◊_a□_b◊_ap→◊_ap in S4 is essentially the same as above: using T we can eliminate the □_b in between the two ◊_a’s. A symmetric countermodel of this formula is as follows.

In KB5 we do not have the T axiom. So ◊_a□_b□_ap→p and ◊_a□_b◊_ap→◊_ap are not in KB5. However, we only need to add □_a◊_b(p∨¬p) to the antecedents. Specifically, note that the formula (◊_b(p∨¬p)∧□_bq)→q is in KB5. Hence:

Their derivations in KB5 are in the same spirit as above, and M and M′ can be reused. ∎

The above non-collapsing results raise a natural question: is there a smaller fragment defined in the same spirit that also collapses S5 to T? Recall that the non-collapsing results are witnessed by formulas like ◊_a□_b◊_ap→◊_ap. When □_b is factive, agent a is ipso facto introspecting since we can eliminate □_b by T. In this section we identify a fragment of agent-nonrepeating formulas in which this cannot happen and S5 does collapse to T. The key idea is that we need to forbid □_a to appear at all in the scope of □_a. Again, to formalize this idea, we provide an occurrence-based definition and an inductive definition.

Define a family {L_X}_X⊆A of fragments of L through the following simultaneous induction:

The following equivalence is easily verified.

As before, we need a notion of bisimulation appropriate for the fragment.

An agent-nonrepeating bisimulation family between two models M and N is a family of binary relations {⇆_X}_X⊆A between M and N such that for every X⊆A and every u∈M and v∈N such that u⇆_Xv:

For any logic L, we write L|_nr for L∩L_A. We can now prove the desired collapse result.

For every reflexive pointed model M,w, there is a partition model N,w′ such that M,w is agent-nonrepeating bisimilar to N,w′. Consequently, T|_nr=S5|_nr.

To make the rest of the construction easier, we make a few auxiliary definitions. For each s∈S, define LastA(s) to be ∗∉A when len(s)=1 and otherwise the a∈X∖X_0 with ⟨X,u⟩=s_len(s) and ⟨X_0,u_0⟩ when s_len(s)−1. Intuitively, LastA(s) denotes the last accessibility relation used in the sequence s. It is easy to observe from the definition above that for any s∈S with ⟨X,u⟩<span class="