What Would You Ask the Machine Learning Model? Identification of User Needs for Model Explanations Based on Human-Model Conversations

Recently we see a rising number of methods in the field of eXplainable Artificial Intelligence. To our surprise, their development is driven by model developers rather than a study of needs for human end users. To answer the question "What would a human operator like to ask the ML model?" we propose a conversational system explaining decisions of the predictive model. In this experiment, we implement a chatbot called dr_ant and train a model predicting survival odds on Titanic. People can talk to dr_ant about the model to understand the rationale behind its predictions. Having collected a corpus of 1000+ dialogues, we analyse the most common types of questions that users would like to ask. To our knowledge, it is the first study of needs for human operators in the context of conversations with an ML model. It is also a first study which uses a conversational system for interactive exploration of a predictive model trained on tabular data. 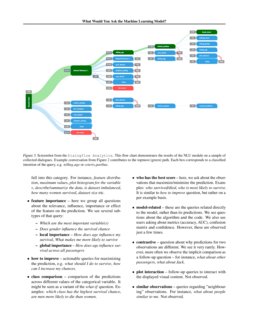 Machine Learning models are widely adopted in all areas of human life. As they often become critical parts of the automated systems, there is an increasing need for understanding their decisions and ability to interact with such systems. Hence, we are currently seeing the growth of the area of eXplainable Artificial Intelligence (XAI). For instance, Scantamburlo et al. (2018) raise an issue of understanding machine decisions and their consequences on the example of computer-made decisions in criminal justice. This example touches upon such features as fairness, equality, transparency and accountability.

Ribera and Lapedriza (2019) identify the following motivations for why to design and use explanations:

These methods and toolboxes are focused on the model developer perspective. Most popular methods like Partial Dependency Profiles, LIME or SHAP are tools for a post-hoc model diagnostic rather than tools linked with the needs of end users. But it is also important to remember that human is the addressee (explainee) of any explanation system. Thus, the implementation of such a system should put the human in the centre while deciding about the form and content.

Also, both the form and the content of the explanations should differ depending on the explainee’s background and role in the model lifecycle. Ribera and Lapedriza (2019) describe three types of explainees: AI researchers and developers, domain experts and the lay audience. Tomsett et al. (2018) introduce six groups: creators, operators, executors, decision-subjects, data-subjects and examiners. These roles are positioned differently in the pipeline. Users differ in the background and the goal of using the explanation system. They vary in the technical skills and the language they use. Finally, explanations should have a comprehensible form – usually visual or textual. Explainees benefit from the interactivity of the explanation system. Sokol and Flach (2018a) propose conversation using class-contrastive counterfactual statements. This idea is implemented by Sokol and Flach (2018b) as a conversational system for the credit score system’s lay audience. Also, Miller (2017) claims that truly explainable agents will use interactivity and communication.

To address this problem we create an open-ended explanation system using dialogue. We develop a chatbot allowing the explainee to interact with a Machine Learning model and its explanations. We implement this particular system for the random forest model trained on Titanic dataset but this approach might be transferred successfully to other models and datasets. Our goal is twofold. Firstly, we create a working prototype of a conversational system for XAI. Secondly, we want to discover what questions people ask to understand the model. This exploration is enabled by the open-ended character of the chatbot. It means that the user might ask any question even if the system is unable to give a satisfying answer for each of them.

As a result, we gain a better understanding of how to answer the explanatory needs of a human operator. With this knowledge, we will be able to create explanation systems tailored to explainee’s needs by addressing their questions. It is in contrast to developing new methods blindly or according to the judgement of their developers.

This dialogue system is a chatbot with the user initiative. It offers a conversation about the underlying random forest model trained on the well-known Titanic dataset. We deliberately select a black box model with no direct interpretation together with a dataset and a problem that can be easily imagined for a wider audience. The dialogue system was built to understand and respond to several groups of queries:

A top-level chatbot architecture is depicted in Figure 1. The system consists of several components:

The source code for the prototype is available at https://github.com/ModelOriented/xaibot.

These are the examples of the NLU output.

An excerpt from an example conversation might be seen in Figure 2. The corresponding intent classification flow is highlighted in Figure 3.

For this experiment, we work on data collected throughout 2 weeks. This is a subset of all collected dialogues, separate from the data used to train the NLU module. Narrowing the time scope of the experiment allows to define the audience and ensure the coherence of the data. As a next step, we filter out conversations with totally irrelevant content and those with less than 3 user queries. Finally, we obtain 621 dialogues consisting of 5675 user queries in total. The average length equals 9.14, maximum 83 and median 7 queries. We see the histogram of conversations length in Figure 4. Note that by conversation length we mean the number of user queries which is equal to the number of pairs (user query, chatbot response).

We analyze the content of the dialogues. Similar user queries are grouped together. For each such category, we calculate the number of conversations with at least one query of this type. Results are presented in Table 1. Note that users were not prompted or hinted to ask any of these with an exception of the ”what do you know about me” question. Moreover, the taxonomy defined here is independent of the intents recognized by the NLU module.

List of the query types ordered decreasingly by the number of conversation they occur in:

We also see users creating alternative scenarios and comparing predictions for different observations manually, i.e. asking for prediction multiple times with different passenger information. Additionally, we observe explainees asking about other sensitive features, that are not included in the model, e.g. nationality, race or income. However, some of these, e.g. income, are strongly correlated with class and fare.

In this paper, we presented a novel application of the dialogue system for conversational explanations of a predictive model. Detailed contributions are following (1) we presented a process based on a dialogue system allowing for effective collection of user expectations related to model interpretation, (2) we presented a xai-bot implementation for a binary classification model for Titanic data, (3) we conducted an analysis of the collected dialogues.

Conversational agent proved to work as a tool to explore and extract user needs related to the use of the Machine Learning models. This method allowed us to validate hypotheses and gather requirements for the XAI system on the example from the experiment.

In this analysis, we identified several frequent patterns among user queries. When given a tool for the model exploration, we saw users engaging in the conversation about model’s decisions rather than focusing on its metrics.

Conversational agent is also a promising, novel approach to XAI as a model-human interface. In the future, such systems might be useful in bridging the gap between automated systems and their end users. An interesting and natural extension of this work would be to compare user queries for different explainee’s groups in the system, e.g. model creators, operators, examiners and decision-subjects. In particular, it would be interesting to collect needs from explainees with no domain knowledge in Machine Learning. Similarly, it is interesting to take advantage of the process introduced in this work to compare user needs across various areas of applications, e.g. legal, medical and financial. Additionally, based on the analysis of the collected dialogues we see two related areas that would benefit from the conversational human-model interaction – Exploratory Data Analysis and model fairness (based on the queries about the sensitive and bias-prone features).