What can human minimal videos tell us about dynamic recognition models?

In human vision objects and their parts can be visually recognized from purely spatial or purely temporal information but the mechanisms integrating space and time are poorly understood. Here we show that human visual recognition of objects and actions can be achieved by efficiently combining spatial and motion cues in configurations where each source on its own is insufficient for recognition. This analysis is obtained by identifying minimal videos: these are short and tiny video clips in which objects, parts, and actions can be reliably recognized, but any reduction in either space or time makes them unrecognizable. State-of-the-art deep networks for dynamic visual recognition cannot replicate human behavior in these configurations. This gap between humans and machines points to critical mechanisms in human dynamic vision that are lacking in current models. 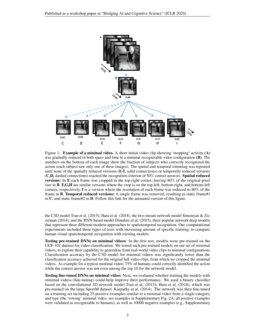 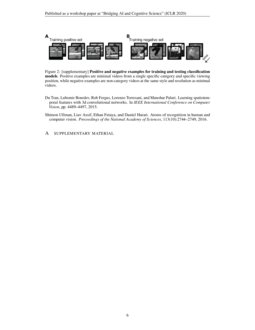 1 The role of temporal information in dynamic visual recognition

. At the neurophysiological level, neurons have been identified that respond selectively to objects and events based on purely spatial information, or motion information alone

Sáry et al. (1993); Perrett et al. (1985). However, several behavioral studies have also provided strong support suggesting that a combination of spatial and temporal information can aid recognition, e.g., Parks (1965); Morgan et al. (1982), but whether and how space and time may be integrated remain unclear.

One of the domains in which temporal information is particularly relevant is action recognition. While several approaches and computational models have been developed to recognize actions from videos – and recent models are based on late or early integration of the spatial and temporal information processed by deep networks (e.g., Giese and Poggio (2003); Tran et al. (2015); Donahue et al. (2015); Karpathy et al. (2014); Simonyan and Zisserman (2014); Hara et al. (2018)) – it remains unclear whether current models make an adequate and human-like use of spatiotemporal information. In order to evaluate the use of spatiotemporal integration by computational models, it is crucial to construct test stimuli that ‘stress test’ the combination of spatial and dynamic features. A difficulty with current efforts is that in many action recognition data sets (e.g. Soomro et al. (2012); Kay et al. (2017)) high performance can be achieved by considering purely spatial information, and so they are not ideally set up to rigorously test spatiotemporal integration.

Here we developed a set of stimuli that can directly test the synergistic interactions of dynamic and spatial information, to identify spatiotemporal features that are critical for visual recognition and to evaluate current deep network architectures on these novel stimuli. We tested minimal spatiotemporal configurations (also referred to below as minimal videos), which are composed of a set of sequential frames (i.e., a video clip), in which humans can recognize an object and an action, but where further small reductions in either the spatial dimension (i.e., reduction by cropping or down sampling of one or more frames) or in the time dimension (i.e., removal of one or more frames from the video) turns the configuration unrecognizable, and therefore also uninterpretable, for humans.

2 A search for minimal videos

The search for each minimal video started from a short video clip, taken from the UCF101 dataset

Soomro et al. (2012), in which humans could recognize a human-object interaction. The search included different video snippets from various human-object interaction categories (e.g., ‘a person rowing’, ‘a person playing violin’, ‘a person mopping’, etc). The original video snippets were reduced to a manually selected 50x50 pixel square region, cropped from 2 to 5 sequential non-consecutive frames, and taken at the same positions on each frame. These regions served as the starting configurations in the search for minimal video configurations described below. In the default condition, frames were presented dynamically in a loop at a fixed frame rate of 2Hz. An illustration of the starting configuration for one of these examples is shown in Fig. 1A (We highly encourage the reader to view the dynamic version of Fig. 1 that is attached to this submission). The starting configuration was then gradually reduced in small steps of 20% in size and resolution (same procedure as in a previous study Ullman et al. (2016)). At each step, we created reduced versions of the current configuration, namely five spatially reduced versions decreasing in size and resolution, as well as temporally reduced versions where a single frame was removed from the video configurations. Each reduced version was then sent to Amazon’s Mechanical Turk (MTurk), where 30 human subjects were asked to freely describe the object and action. MTurk workers tested on a particular video configuration were not tested on additional configurations from the same action type. The success rates in recognizing the object and the action were recorded for each example. We defined a video configuration as recognizable if more than 50% of the subjects described both the object and the action correctly.

The search continued recursively for the recognizable reduced versions, until it reached a video configuration that was recognizable, but all of its reduced versions (in either space or time) were unrecognizable. We refer to such a configuration as a ‘minimal video’. An example of a minimal video is shown in Fig. 1B, and the reduced sub-minimal versions are shown in Fig. 1C-I. As shown in Fig. 1B-D, the spatial content of the minimal and temporal sub-minimal configurations was very similar: there were only minor spatial content added from frame 1 to frame 2. Despite the similarity of the two frames, there was a large difference in human recognition due to the removal of the motion signal. As shown in Fig. 1E-H, in the tested cases the motion content of the minimal and (spatial) sub-minimal is very similar, that is, the pixels that are cropped out do not remove a large amount of image motion. This implies that the motion signal alone is not a sufficient condition for human recognition of minimal videos.

Next, we evaluated whether training the models with minimal videos (fine-tuning) could help improve their performance. We used a binary classifier based on the convolutional 3D network model

Subjects who could recognize the minimal videos could also identify internal parts in them (e.g., body parts, action objects, etc.), and we hypothesized that action recognition is accompanied by detailed interpretation of the image parts as well as spatiotemporal relations between parts. To test this conjecture we ran a new series of experiments where subjects were instructed to describe internal components of the videos. MTurk subjects were presented with the minimal videos, along with a probe pointing to one of its internal spatial components. We defined a component as ’recognized’ if it was correctly labeled by more than 50% of the subjects. Average recognition for 31 components in 5 different types of minimal videos was 0.77±0.17. For example, in the “mopping” minimal video (Fig. 1) most of the subjects were able to correctly label the arm, legs, stick and vacuum. To assess whether the dynamic video configurations were necessary for interpretation, we repeated the experiment using the spatial sub-minimal and temporal sub-minimal versions, using the same procedure of inserting a probe in the frames. In contrast to the reports obtained from the minimal videos, subjects consistently struggled to recognize the parts in the sub-minimal videos.