Artificial neural network (ANN) is a very useful tool in solving learning problems. Boosting the performances of ANN can be mainly concluded from two aspects: optimizing the architecture of ANN and normalizing the raw data for ANN. In this paper, a novel method which improves the effects of ANN by preprocessing the raw data is proposed. It totally leverages the fact that different features should play different roles. The raw data set is firstly preprocessed by principle component analysis (PCA), and then its principle components are weighted by their corresponding eigenvalues. Several aspects of analysis are carried out to analyze its theory and the applicable occasions. Three classification problems are launched by an active learning algorithm to verify the proposed method. From the empirical results, conclusion comes to the fact that the proposed method can significantly improve the performance of ANN. 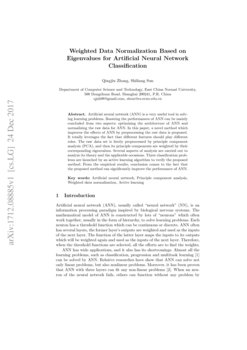 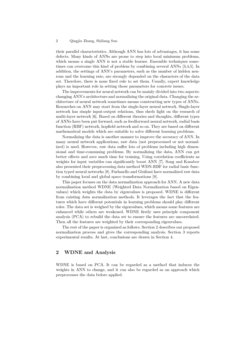 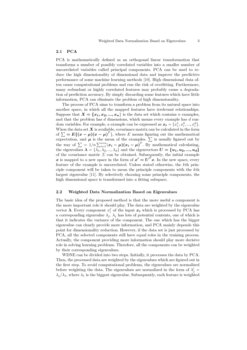 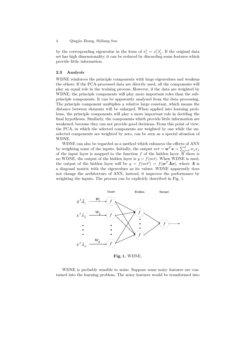 Artificial neural network (ANN), usually called “neural network” (NN), is an information processing paradigm inspired by biological nervous systems. The mathematical model of ANN is constructed by lots of “neurons” which often work together, usually in the form of hierarchy, to solve learning problems. Each neuron has a threshold function which can be continuous or discrete. ANN often has several layers, the former layer’s outputs are weighted and used as the inputs of the next layer. The function of the latter layer maps the inputs to its outputs which will be weighted again and used as the inputs of the next layer. Therefore, when the threshold functions are selected, all the efforts are to find the weights.

ANN has wide applications, and it also has its shortcomings. Almost all the learning problems, such as classification, progression and multitask learning [1] can be solved by ANN. Relative researches have show that ANN can solve not only linear problems, but also nonlinear problems. Moreover, it has been proven that ANN with three layers can fit any non-linear problems [2]. When an neuron of the neural network fails, others can function without any problem by their parallel characteristics. Although ANN has lots of advantages, it has some defects. Many kinds of ANNs are prone to step into local minimum problems, which means a single ANN is not a stable learner. Ensemble techniques sometimes can overcome this kind of problem by combining several ANNs [3, 4, 5]. In addition, the settings of ANN’s parameters, such as the number of hidden neurons and the learning rate, are strongly depended on the characters of the data set. Therefore, there is none fixed rule to set them. Usually, expert knowledge plays an important role in setting those parameters for concrete issues.

. Based on different theories and thoughts, different types of ANNs have been put forward, such as feedforward neural network, radial basis function (RBF) network, hopfield network and so on. They are based on different mathematical models which are suitable to solve different learning problems.

Normalizing the data is another manner to improve the accuracy of ANN. In many neural network applications, raw data (not preprocessed or not normalized) is used. However, raw data suffer lots of problems including high dimensional and time-consuming problems. By normalizing the data, ANN can get better effects and save much time for training. Using correlation coefficients as weights for input variables can significantly boost ANN [7]. Song and Kasabov also presented their preprocessing data method WDN-RBF for radial basic function typed neural networks [8]. Furlanello and Giuliani have normalized raw data by combining local and global space transformations [9].

The rest of the paper is organized as follows. Section 2 describes our proposed normalization process and gives the corresponding analysis. Section 3 reports experimental results. At last, conclusions are drawn in Section 4.

WDNE is based on PCA. It can be regarded as a method that induces the weights in ANN to change, and it can also be regarded as an approach which preprocesses the data before applied.

. High dimensional data often cause computational problems and run the risk of overfitting. Furthermore, many redundant or highly correlated features may probably cause a degradation of prediction accuracy. By simply discarding some features which have little information, PCA can eliminate the problem of high dimensionality.

The process of PCA aims to transform a problem from its natural space into another space, in which all the mapped features have irrelevant relationships. Suppose that X={x1,x2,...,xn} is the data set which contains n examples, and that the problem has d dimensions, which means every example has drandom variables. For example, a example can be expressed as xi={x1i,x2i,...,xdi}. When the data set X is available, covariance matrix can be calculated in the form of ∑=E{(x−μ)(x−μ)T}, where E means figuring out the mathematical expectation, and μ is the mean of the examples. ∑ is usually figured out by the way of ∑=1/n∑i=ni=1(xi−μ)(xi−μ)T. By mathematical calculating, the eigenvalues λ={λ1,λ2,...,λd}

U={u1,u2,...,ud} of the covariance matric Σ can be obtained. Subsequently, the initial example x is mapped to a new space in the form of x′=UTx. In the new space, every feature of the example is uncorrelated. Unless stated otherwise, the kth principle component will be taken to mean the principle components with the kth largest eigenvalue [11]. By selectively choosing some principle components, the high dimensional space is transformed into a fitting subspace.

2.2 Weighted Data Normalization Based on Eigenvalues

The basic idea of the proposed method is that the more useful a component is the more important role it should play. The data are weighted by the eigenvalue vector

λ. Every component xji of the input xi which is processed by PCA has a corresponding eigenvalue λj. λj

has lots of potential contents, one of which is that it indicates the variance of the component. The one which has the bigger eigenvalue can clearly provide more information, and PCA mainly depends this point for dimensionality reduction. However, if the data set is just processed by PCA, all the selected components still have equal roles in the training process. Actually, the component providing more information should play more decisive role in solving learning problems. Therefore, all the components can be weighted by their corresponding eigenvalues.

WDNE can be divided into two steps. Initially, it processes the data by PCA. Then, the processed data are weighted by the eigenvalues which are figured out in the first step. To avoid computational problems, the eigenvalues are normalized before weighting the data. The eigenvalues are normalized in the form of λ′j=λj/λ1, where λ1 is the biggest eigenvalue. Subsequently, each feature is weighted by the corresponding eigenvalue in the form of xji=xjiλ′j. If the original data set has high dimensionality, it can be reduced by discarding some features which provide little information.

WDNE is probably sensible to noise. Suppose some noisy features are contained into the learning problem. The noisy features would be transformed into a new space after PCA processing. If many of the noisy ingredients are redistributed into the last several features, the noisy effect is obviously reduced. However, if many of the noisy ingredients are transformed into the first few features which correspond to the biggest eigenvalues, the noisy effect will be enhanced, and the performance of the recognition will be degraded. Consequently, caution should be taken before WDNE is applied to the problem which may contain noises.

Back propagation neural network is applied in the implemented experiments. All of the data sets come from the UCI repository111http://archive.ics.uci.edu/ml/. The ANN has three layers, and the number of hidden neurons is set as

where n and m denote the number of input and output neurons of the networks respectively, and a is a constant ranging from one to ten. In order to effectively boost WDNE, five ANNs are used in every experiment, and the final hypothesis is the voted result by the five committees.

Active learning algorithm and ten-fold cross validation (CV) are lunched on the three experiments. Active learning aims to reduce the number of labeled data for learning by selecting the most informative examples [12]. The active learning algorithm used in this paper is for classification. Initially, only a few labeled examples are prepared at hand. At every round of iteration α examples are selected from β candidates which are the most valuable ones in the unlabeled examples pool. In order to more objectively reflects the result, ten-fold CV is applied. The data set is divided in to ten parts. One part is used as validation set, another part is used as test data, and the others are used for training. The final result is the average of the ten results.

In order to clearly evaluate the advantage of WDNE, three other representations of data are implemented, and they are original data (raw data), PCA processed data and negatively weighted data. The descriptions of them are listed as follows:

All the compared data are trained by the back-propagation network under the same setting of parameters.

This data set is composed of 4501 examples which contains 1813 spams. The problem have totally 57 features without dimension reduction. Initially, the active learning algorithm runs on 15 labeled examples which consists six positive ones and nine negative ones. Before sampling, 32 unlabeled example which are seemed as the most informative ones are chosen from the pool whose size is 240. Subsequently, 10 examples are chosen from the 32 candidates at random.

Fig. 2 (b) shows that WDNE is significantly superior to the other three kinds of representations. As the results of last experiment, the data set of negative weighted has the worst performance. Although there is difference between the performances of original data and PCA processed data, they almost have the same effect on the whole.

Fig. 2 (c) shows the results. It is apparent to tell that the WDNE performs the best and the negatively weighted data set plays the worst. In this experiment, it is obviously that PCA processed data are not as good as the original data. There may be several possible causes of this phenomenon. (1) It is caused by the noises. (2) The original representation of the data set is more suitable to solve the learning problem in this experiment.

In this paper, a new data normalization approach WDNE which can be used to improve the performances of neural networks is proposed. WDNE does not optimize the architecture of the ANN. However, it boosts the performance of ANN by preprocessing the data. PCA plays an important role in this method. The components are weighted by the corresponding eigenvalues of the covariance matrix. In order to verify the proposed method, three other representations of data are implemented in the experiments. All the utilized data sets come from the UCI repository. The empirical results clearly show that WDNE is an effective method for optimizing the performance of ANN.

Researches on WDNE requires further investigation. In this paper WDNE is used for ANN, it may be applied to combine with other approaches, such as distance metric learning (DML) [13]

, etc. Moreover, WDNE may be regraded as a way for feature selection.