Abstract Dialectical Frameworks (ADFs) generalize Dung's argumentation frameworks allowing various relationships among arguments to be expressed in a systematic way. We further generalize ADFs so as to accommodate arbitrary acceptance degrees for the arguments. This makes ADFs applicable in domains where both the initial status of arguments and their relationship are only insufficiently specified by Boolean functions. We define all standard ADF semantics for the weighted case, including grounded, preferred and stable semantics. We illustrate our approach using acceptance degrees from the unit interval and show how other valuation structures can be integrated. In each case it is sufficient to specify how the generalized acceptance conditions are represented by formulas, and to specify the information ordering underlying the characteristic ADF operator. We also present complexity results for problems related to weighted ADFs. 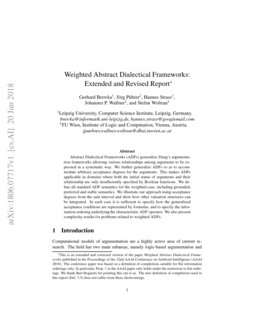 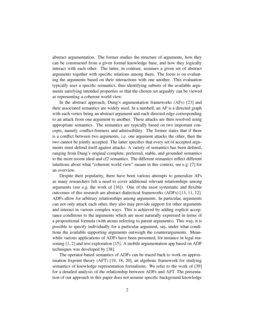 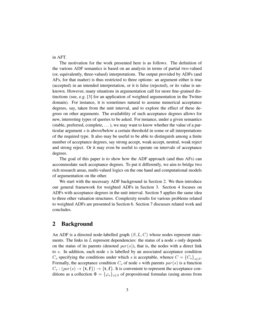 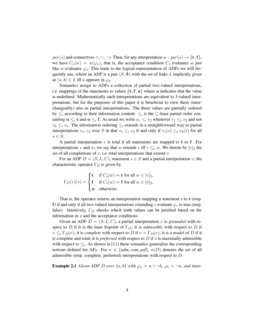 Computational models of argumentation are a highly active area of current research. The field has two main subareas, namely logic-based argumentation and abstract argumentation. The former studies the structure of arguments, how they can be constructed from a given formal knowledge base, and how they logically interact with each other. The latter, in contrast, assumes a given set of abstract arguments together with specific relations among them. The focus is on evaluating the arguments based on their interactions with one another. This evaluation typically uses a specific semantics, thus identifying subsets of the available arguments satisfying intended properties so that the chosen set arguably can be viewed as representing a coherent world view.

In the abstract approach, Dung’s argumentation frameworks (AFs) [23] and their associated semantics are widely used. In a nutshell, an AF is a directed graph with each vertex being an abstract argument and each directed edge corresponding to an attack from one argument to another. These attacks are then resolved using appropriate semantics. The semantics are typically based on two important concepts, namely conflict-freeness and admissibility. The former states that if there is a conflict between two arguments, i.e. one argument attacks the other, then the two cannot be jointly accepted. The latter specifies that every set of accepted arguments must defend itself against attacks. A variety of semantics has been defined, ranging from Dung’s original complete, preferred, stable, and grounded semantics to the more recent ideal and cf2 semantics. The different semantics reflect different intuitions about what “coherent world view” means in this context, see e.g. [7] for an overview.

Despite their popularity, there have been various attempts to generalize AFs as many researchers felt a need to cover additional relevant relationships among arguments (see e.g. the work of [16]). One of the most systematic and flexible outcomes of this research are abstract dialectical frameworks (ADFs) [13, 11, 12]. ADFs allow for arbitrary relationships among arguments. In particular, arguments can not only attack each other, they also may provide support for other arguments and interact in various complex ways. This is achieved by adding explicit acceptance conditions to the arguments which are most naturally expressed in terms of a propositional formula (with atoms referring to parent arguments). This way, it is possible to specify individually for a particular argument, say, under what conditions the available supporting arguments outweigh the counterarguments. Meanwhile various applications of ADFs have been presented, for instance in legal reasoning [1, 2] and text exploration [15]. A mobile argumentation app based on ADF techniques was developed by [38].

The operator-based semantics of ADFs can be traced back to work on approximation fixpoint theory (AFT) [19, 18, 20], an algebraic framework for studying semantics of knowledge representation formalisms. We refer to the work of [39] for a detailed analysis of the relationship between ADFs and AFT. The presentation of our approach in this paper does not assume specific background knowledge in AFT.

The motivation for the work presented here is as follows. The definition of the various ADF semantics is based on an analysis in terms of partial two-valued (or, equivalently, three-valued) interpretations. The output provided by ADFs (and AFs, for that matter) is thus restricted to three options: an argument either is true (accepted) in an intended interpretation, or it is false (rejected), or its value is unknown. However, many situations in argumentation call for more fine-grained distinctions (see, e.g. [3] for an application of weighted argumentation in the Twitter domain). For instance, it is sometimes natural to assume numerical acceptance degrees, say, taken from the unit interval, and to explore the effect of these degrees on other arguments. The availability of such acceptance degrees allows for new, interesting types of queries to be asked. For instance, under a given semantics (stable, preferred, complete, …), we may want to know whether the value of a particular argument s is above/below a certain threshold in some or all interpretations of the required type. It also may be useful to be able to distinguish among a finite number of acceptance degrees, say strong accept, weak accept, neutral, weak reject and strong reject. Or it may even be useful to operate on intervals of acceptance degrees.

The goal of this paper is to show how the ADF approach (and thus AFs) can accommodate such acceptance degrees. To put it differently, we aim to bridge two rich research areas, multi-valued logics on the one hand and computational models of argumentation on the other.

We start with the necessary ADF background in Section 2. We then introduce our general framework for weighted ADFs in Section 3. Section 4 focuses on ADFs with acceptance degrees in the unit interval. Section 5 applies the same idea to three other valuation structures. Complexity results for various problems related to weighted ADFs are presented in Section 6. Section 7 discusses related work and concludes.

For an ADF D=(S,L,C), statement s∈S and a partial interpretation v, the characteristic operator ΓD is given by

Given ADF D over {a,b} with φa=a∨¬b, φb=¬a, and interpretations

In this section we introduce weighted ADFs (wADFs). More precisely, we introduce a general framework which allows us to define wADFs over a chosen set V of values (acceptance degrees) based on an information ordering ≤i on V∪{u}.111Slightly abusing notation we write ≤i for both the specific ADF ordering and the generic ordering used here.

As for standard ADFs, the special value u represents an undefined truth value. As usual, (Vu,≤i) forms a complete partial order (CPO) iff: (1) it has a least element, here u∈Vu, (2) each non-empty subset X⊆Vu has a greatest lower bound ⨅iX∈Vu, and (3) each ascending chain x1≤ix2≤i… over Vu has a least upper bound ⨆iX∈Vu.

ADFs are a special case of wADFs with and the information ordering as defined in the background section. We provide a formal result in Theorem 3.19 below.

In Figure 1a a simple wADF with three arguments is shown that are intended to decide the acceptance status of a paper based on that paper’s significance and scientific methodology. On the right side of that figure (b), a value ordering Vu is shown, with the intended meaning that u denotes no knowledge w.r.t. the arguments, tendencies denote a certain leaning towards acceptance or rejection, and the information maximal values denote acceptance, borderline acceptance, or rejection.

As for ADFs, we will use propositional formulas φs interpreted over V to specify acceptance conditions. The understanding is that a formula φs specifies a function Cs such that for each interpretation w:par(s)→V, Cs(w) is obtained by considering w(φs), the evaluation of the formula φs under the interpretation w. Unlike in classical propositional logic, there is no single standard way of interpreting formulas in the multi-valued case. Thus the user (specifying the wADF) should state how formulas are to be evaluated under interpretations of atoms by values from V.

Continuing Example 3.2, let us define acceptance conditions for each argument. Say argument “paper’s significance” (shortened to s) shall be set to “accept” and that the paper’s “scientific methodology” (shortened to m) shall be set to “borderline” (e.g. because of peer reviewing). This can be expressed simply by stating: φs= accept, φm= borderline. The third argument, shortened to a, shall depend on the status of the two other arguments, namely by taking the most informative value “compatible” (w.r.t. information ordering) to the values given to the other arguments. That is, take the usual greatest lower bound for two values w.r.t. the information ordering shown in Figure 1b. Say we formalize this by φa=s∧m, defining the conjunction as the meet.

Let V be a set of truth values with u∉V. A relation ≤i⊆Vu×Vu is flat iff for all x,y∈Vu:

As mentioned above, clearly all standard ADFs are flat. For flat orderings, the greatest lower bound of a subset X⊆Vu is obtained thus:

The set of all completions of v is denoted by [v]c.

Formally, the operator is defined as follows: for each s∈S, the truth value ΓD(v)(s) is the greatest lower bound with respect to (Vu,≤i) (the consensus) of the set {Cs(w) ∣∣ w∈[v]c}. With these specifications the rest is entirely analogous to the definitions for standard ADFs.

Let D=(S,L,C,V,≤i) be a wADF and v:S→Vu. Applying ΓD to v yields a new interpretation (the consensus over [v]c) defined as

As usual, we can now define the semantics via fixpoints.

Again we use adm(D), com(D) and prf(D) to denote the set of all admissible, complete and preferred interpretations for D, respectively. Moreover, mod(D) gives the set of all models of D.

Independently of the previous example, we want to emphasize that we have to show existence of the least fixpoint of ΓD, otherwise the grounded interpretation is not well-defined in general. The simplest way to do this is to show monotonicity of the operator ΓD.

To this end, we lift the information ordering on Vu point-wise to interpretations over Vu. For v,w:S→Vu, we set

The pair ({v:S→Vu},≤i) then forms a CPO in which the characteristic operator ΓD of wADFs is monotone. The least element of this CPO is the interpretation vu:s↦u that maps every statement to u and we will also use ⨆iX to denote the least upper bound for subset X of ({v:S→Vu},≤i).

Existence of the least fixpoint of ΓD then follows via the fixpoint theorem for monotone operators in complete partial orders (see, e.g., [17], Theorem 8.22).

Let D be a weighted adf with an information ordering ≤i.

Next, we show that the well-known relationships between Dung semantics carry over to our generalizations.

Let D be a weighted adf. It holds that

If D is flat, then additionally mod(D)⊆prf(D).

The flatness property is also crucial in the following result that lets us compute the grounded semantics by iterative application of the characteristic operator.

Let D=(S,L,C,V,≤i) be a wADF such that every ascending chain in ({v:S→Vu},≤i) is finite. Then, there is some n∈N such that ΓnD(vu) is the grounded interpretation of D. Note that ΓiD denotes i iterative applications of ΓD.

In general, one cannot guarantee that we reach the grounded interpretation by iterative application of the characteristic operator.

Another result concerns acyclic wADFs, i.e. ADFs (S,L,C,V,≤i) where the pair (S,L) forms an acyclic directed graph and generalizes a recent result of [33].

For any acyclic wADF D with countable S, com(D)=prf(D)={v} with v the grounded interpretation of D.

Moving from the two-valued to the multi-valued case offers an additional degree of freedom: it is not clear a priori what the assumed, respectively derived truth values are. The stable semantics we introduce here will thus be parameterized by a subset

W of the set of values V over which the weighted ADF is defined.

This clearly generalizes stable semantics for standard ADFs: just let and W={\definecolor[named]pgfstrokecolorrgb0,0,0\pgfsys@color@gray@stroke0\pgfsys@color@gray@fill0f}. We conclude this section by showing the exact relationship between ADFs and wADFs.

4 Weighted ADFs Over the Unit Interval

In this section we focus on weighted ADFs over the unit interval, that is, wADFs over V=[0,1].

We first assume a flat information ordering ≤i. As discussed in Section 3, we will use propositional formulas φs to specify acceptance conditions over [0,1]. In the subsequent examples, we employ a formula evaluation that is defined via structural induction as follows: