Identifying multiple speakers without knowing where a speaker's voice is in a recording is a challenging task. In this paper, a hierarchical attention network is proposed to solve a weakly labelled speaker identification problem. The use of a hierarchical structure, consisting of a frame-level encoder and a segment-level encoder, aims to learn speaker related information locally and globally. Speech streams are segmented into fragments. The frame-level encoder with attention learns features and highlights the target related frames locally, and output a fragment based embedding. The segment-level encoder works with a second attention layer to emphasize the fragments probably related to target speakers. The global information is finally collected from segment-level module to predict speakers via a classifier. To evaluate the effectiveness of the proposed approach, artificial datasets based on Switchboard Cellular part1 (SWBC) and Voxceleb1 are constructed in two conditions, where speakers' voices are overlapped and not overlapped. Comparing to two baselines the obtained results show that the proposed approach can achieve better performances. Moreover, further experiments are conducted to evaluate the impact of utterance segmentation. The results show that a reasonable segmentation can slightly improve identification performances. 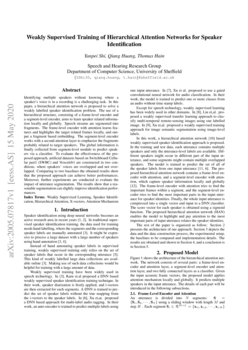 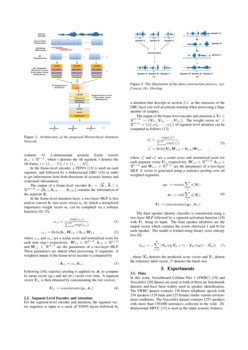 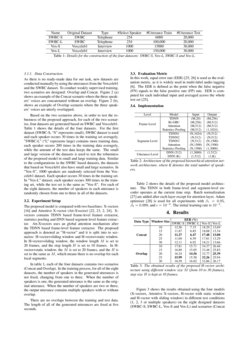 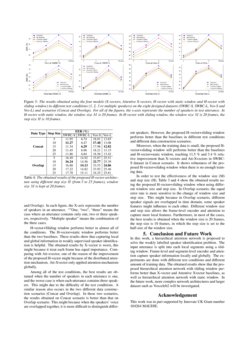 In multi-speaker applications is common to have pre-computed models from...
Carlos Rodrigo Castillo-Sanchez, et al. ∙

[variani2014deep, wang2018attention]. In traditional supervised speaker identification training, the data used for training needs hand labelling, where the segments and the corresponding speaker labels are manually annotated [karu2018weakly]. It might be expensive to process a large dataset with a large number of speakers using hand annotation [karu2018weakly, jia2019leveraging].

Instead of hand annotating speaker labels in supervised training, weakly supervised training only relies on the set of speaker labels that occur in the corresponding utterance [zhou2018brief]. This kind of weakly labelled large data collections are available online [karu2018weakly]. Making use of such data collections would be helpful for training with a large amount of data.

Weakly supervised training have been widely used in speech technology. In [karu2018weakly], Karu et.al proposed a DNN based weakly supervised speaker identification training technique. In their work, speaker diarization is firstly applied, and i-vectors are then extracted for each segments. A DNN is trained to predict the set of speaker labels without the true mapping from the i-vectors to the speaker labels. In [xu2017unsupervised], Xu et,at. proposed a DNN based approach for multi-label audio tagging. In their work, an auto-encoder is trained to predict multiple labels using one input utterance. In [xu2018large]

, Xu et al. proposed to use a gated convolutional neural network for audio classification. In their work, the model is trained to predict one or more classes from an audio without time stamp labels.

Except for speech technology, weakly supervised learning has been widely used in other domains. In [liu2019weakly]

In this work, a hierarchical attention network [yang2016hierarchical] based weakly supervised speaker identification approach is proposed. In the training and test data, each utterance contains multiple speakers and only the utterance-level labels are available. Different speakers might occur in different part of the input utterance, and some segments might contain multiple overlapped speakers. The model is trained to predict the set of all of the speaker labels from one input utterance [zhang2007multi, xu2017unsupervised]. The proposed hierarchical attention network contains a frame-level encoder with attention, and a segment-level encoder with attention, which capture speaker information locally and globally [shi2020h]

. The frame-level encoder with attention tries to find the important frames within a segment, and the segment-level encoder tries to find the most important parts in the input utterance for speaker identities. Finally, the whole input utterance is compressed into a single vector and input to a DNN classifier. The score vector for each speaker is obtained using a sigmoid function. The proposed hierarchical attention network (HAN) enables the model to highlight and pay attention to the most important parts of input utterance relates the speaker identities.

The rest of the paper is organized as follow: Section 2 presents the architecture of our approach. Section 3 depicts the data and the data construction process, the experimental setup, the baselines to be compared and implementation details. The results are obtained and shown in Section 4, and a conclusion is in Section 5.

Figure 1 shows the architecture of the hierarchical attention network. The network consists of several parts: a frame-level encoder and attention layer, a segment-level encoder and attention layer, and two fully connected layers as a classifier. Given the input acoustic frame vectors, the proposed model applies attention mechanism locally and globally. It predicts multiple speakers in the input utterance. The details of each part will be introduced in the following subsections.

In the frame-level encoder, a TDNN [peddinti2015time] is used on each segment, and followed by a bidirectional GRU [chung2014empirical] in order to get information from both directions of acoustic frames and contextual information.

The output of a frame-level encoder contains the information of the segment Si.

In the frame-level attention layer, a two-layer MLP is first used to convert hi into score vector zi, by which a normalized importance weight vector αi can be computed via a softmax function [yang2016hierarchical, rimer2004softprop].

where zi,t and αi,t are a scalar score and normalized score for each time step t respectively. Wi,0∈RE×E, bi,0∈R1×E and Wi,1∈RE×1 are the parameters of a two-layer MLP. These parameters are shared when processing N segments. A weighted output of the frame-level encoder is computed by

Following [snyder2018x], statistics pooling is applied on Ai to compute its mean vector (μi) and std (σi) vector over time. A segment vector VSi is then obtained by concatenating the two vectors:

For the segment-level encoder and attention, the segment vector sequence is input to a stack of TDNN layers followed by a attention that descript in section 2.1. as the omission of the GRU layer can well accelerate training when processing a large number of samples.

The output of the frame level encoder and attention is VS∈RN×E={VS1,VS2,⋯,VSN}. The weight vector αs∈RN×1={αs1,αs2,⋯,αsN} of segment level attention can be computed as follows [Pan2019AutomaticHA]:

where zsi and αsi are a scalar score and normalized score for each segment vector VSi respectively. Wn,0∈RE×E, bn,0∈R1×E and Wn,1∈RE×1 are the parameters of a two-layer MLP. A vector is generated using a statistics pooling over all weighted segments:

[ito1991representation] with VU being its input. The final speaker identities are the output vector which contains the scores (between 1 and 0) for each speaker. The model is trained using binary cross entropy loss [xu2017unsupervised]:

In this work, Switchboard Cellular Part 1 (SWBC) [swb] and Voxceleb1 [nagrani2017voxceleb] dataset are used, as both of them are benchmark datasets and have been widely used in speaker identification. The SWBC dataset contains 130 hours telephone speech with 254 speakers (129 male and 125 female) under various environment conditions. The Voxceleb1 dataset contains 1251 speakers with more than 150,000 utterances collected in the wild. 20-dimensional MFCC [tiwari2010mfcc] is used as the input acoustic features.

As there is no ready-made data for our task, new datasets are conducted manually by using the utterances from the Voxceleb1 and the SWBC dataset. To conduct weakly supervised training, two scenarios are designed: Overlap and Concat. Figure 2 (a) shows an example of the Concat scenario where the three speakers’ voices are concatenated without an overlap. Figure 2 (b), shows an example of Overlap scenario where the three speakers’ voices are utterly overlapped.

The proposed model is compared with two baselines: X-vectors [snyder2018x] and Attentive X-vector (Att-Xvector) [zhu2018self, okabe2018attentive, wang2018attention, rahman2018attention]. X-vectors contains TDNN based frame-level feature extractor, statistics pooling and DNN based segment-level feature extractor. Att-Xvectors uses an global attention mechanism after the TDNN based frame-level feature extractor. The proposed approach is denoted as ”H-vector” and it is split into to scenarios: H-vector+sliding window and H-vector+static window. In H-vector+sliding window, the window length M is set to 20 frames, and the step length H is set to 10 frames. In H-vector+static window, the M is set to 20 frames, and the H is set to the same as M, which means there is no overlap for each local segments.

There are no overlaps between the training and test data. The length of all of the generated utterances are fixed at five seconds.

is used as the evaluation metric, as it is widely used in multi-label audio tagging

[xu2017unsupervised]. The EER is defined as the point when the false negative (FN) equals to the false positive rate (FP) rate. EER is computed for each individual input and averaged across the whole test set [cheng2004method].

shows the details of the proposed model architecture. The TDNN in both frame-level and segment-level encoder operates at the current time step. Batch normalization

Figure 3 shows the results obtained using the four models (X-vectors, Attentive X-vectors, H-vector with static window and H-vector with sliding window) in different test conditions (1, 2, 3 or multiple speakers) on the eight designed datasets (SWBC-S, SWBC-L, Vox-S and Vox-L) and scenarios (Concat and Overlap). In each figure, the X-axis represents the number of speakers in an utterance. “”One, “two”, “three” means the case where an utterance contains only one, two or three speakers, respectively. “Multiple speaker” means the combination of the three cases.

H-vector+Sliding window performs better in almost all of the conditions. The H-vector+static window performs better than the two baselines. These results show that capturing local and global information in weakly supervised speaker identification is helpful. The obtained results by X-vector is worst, this might because it treat each frame has equal importance. Comparing with Att-xvector, one of the reason of the improvement of the proposed H-vector might because of the distributed attention mechanism. Att-Xvector only applied attention mechanism globally.

Among all of the test conditions, the best results are obtained when the number of speakers in each utterance is one, and the worse case is when each utterance contains three speakers. This might due to the difficulty of the test conditions. A similar reason also occurs in the two different data construction scenarios (Concat and Overlap). In these two scenarios, the results obtained on Concat scenario is better than that on Overlap scenario. This might because when the speakers’ voice are overlapped together, it is more difficult to distinguish different speakers. However, the proposed H-vector+sliding window performs better than the baselines in different test conditions and different data construction scenarios.

This work was in part supported by Innovate UK Grant number 104264 MAUDIE.