Unsupervised and self-supervised learning methods have leveraged unlabelled data to improve the pretrained models. However, these methods need significantly large amount of unlabelled data and the computational cost of training models with such large amount of data can be prohibitively high. We address this issue by using unlabelled data during finetuning, instead of pretraining. We propose acoustic model finetuning (FT) using labelled and unlabelled data. The model is jointly trained to learn representations to classify senones, as well as learn contextual acoustic representations. Our training objective is a combination of cross entropy loss, suitable for classification task, and contrastive loss, suitable to learn acoustic representations. The proposed approach outperforms conventional finetuning with 11.2 Bengali languages respectively. 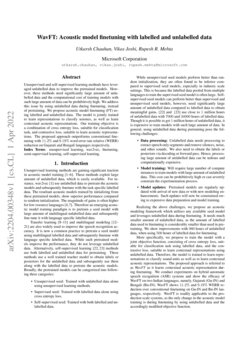 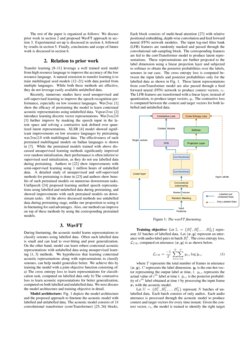 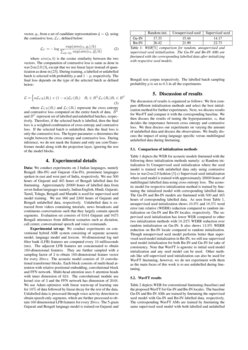 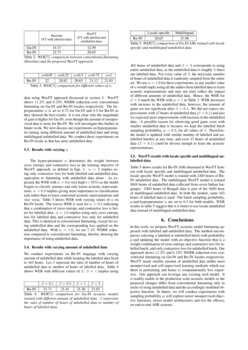 Transfer learning[TL_kunze-etal-2017, TL_2, TL_3, Joshi2020] and multilingual modeling[SHL_1, SHL_2, MLT_1, MLT_2, Arindam_Mrnnt, Multilingual_RNNT, Besacier-ASRUnderResourcedSurvey, joshi2021multiple, LanguageIndependentAM, Lin-MultilingualAM] are also widely used to improve the speech recognition accuracy. It is now a common practice to pretrain a seed model using multilingual labelled data and subsequently finetune with language specific labelled data. While such pretrained models improve the performance, they do not leverage unlabelled data. Alternatively, self-supervised learning[amzn_million, BigSSL] methods use both labelled and unlabelled data for pretraining. These methods use a well trained teacher model to obtain labels or posteriors for the unlabelled data and subsequently use them along with the labelled data to pretrain the acoustic models. Broadly, the pretrained models can be categorized into following three categories:

11.2% and 9.19% WERR reduction over conventional finetuning on Gu-IN and Bn-IN languages, respectively. WavFT is readily applicable to the production scale systems, as the only change in the acoustic model training is during finetuning by using unlabelled data and the accordingly modified objective function.

2 Relation to prior work

[wav2vec2.0] further improve by masking the speech input in the latent space and solving a contrastive task defined over quantized latent representations. XLSR[XLSR] model showed significant improvements on low resource languages by pretraining wav2vec2.0 with multilingual data. The effectiveness of such pretrained multilingual models on Indian languages is shown in [Ai4Bharat]. While the pretrained models trained with above discussed unsupervised learning methods significantly improved over random initialization, their performance is often inferior to supervised seed initialization, as they do not use labelled data during pretraining. Authors in [amzn_million] show improvements with semi-supervised learning using 1 million hours of unlabelled data. A detailed study of unsupervised and self-supervised methods for pretraining is done in [BigSSL] and authors show benefits of such pretrained models on numerous downstream tasks. UniSpeech [UniSpeech] proposed learning unified speech representations using labelled and unlabelled data during pretraining, and showed improvements with such pretrained models on down-stream tasks. All the above discussed methods use unlabelled data during pretraining stage, unlike our proposition to using it in finetuning for said advantages. Also, our method can improve on top of these methods by using the corresponding pretrained models.

with relative positional embedding, depth-wise convolution and feed forward neural (FFN) network modules. The input log-mel filter bank (LFB) features are randomly masked and passed through the convolutional sub-sampling block. The corresponding features are fed to the convTransformer model to produce latent representations. These representations are further projected to the label dimension using a linear projection layer and subjected to softmax to obtain the posterior probabilities over the labels, senones in our case. The cross entropy loss is computed between the input labels and posterior probabilities only for the labelled data as shown in Fig.

1. These latent representations from convTransformer model are also passed through a feed forward neural (FFN) network to produce context vectors, ct. The LFB features are transformed with a linear layer, instead of quantization, to produce target vectors, qt. The contrastive loss is computed between the context and target vectors for both labelled and unlabelled data.

Let U={BU1,BU2,…BUN} represent N batches of unlabelled data. Each batch consists of only audios. Each audio utterance is processed through the acoustic model to produce context and target vectors for every time instant. Given the context vector, ct, the model is trained to identify the right target vector, qt, from a set of candidate representations ~q∼Qt using the contrastive loss, LC, defined below:

is the cosine similarity between the two vectors. The computation of contrastive loss is same as done in wav2vec2.0

[wav2vec2.0], except that we use linear layer instead of quantization as done in [BigSSL]. During training, a labelled or unlabelled batch is selected with probability p and 1−p, respectively. The final loss depends on the type of the selected batch as defined below:

80-dimensional log mel filter bank (LFB) features are computed every 10 milliseconds (ms). The adjacent LFB features are concatenated to obtain 160-dimensional features. They are further sampled with a sampling factor of 2 to obtain 160-dimensional feature vector for every 20ms. The acoustic model consists of 18 convolutional transformer blocks. Each block consists of multi-head attention with relative positional embedding, convolutional block and FFN network. Multi-head attention uses 8 attention heads with inner dimension of 624. The convolutional module use kernel size of 3 and the FFN network has dimension of 2048. We use Adam optimizer with linear warm-up of learning rate for 10% of data followed by linear decay for the rest of the data. Unlabelled data is processed through voice activity detection to obtain speech only segments, which are further processed to obtain 160 dimensional LFB features for every 20ms. The 5-gram Gujarati and Bengali language model is trained on Gujarati and Bengali text corpus respectively. The labelled batch sampling probability p is set to 0.5 in all the experiments.

The discussion of results is organized as follows: We first compare different initialization methods and select the best initialization method for further experiments. Next, we discuss results for WavFT and compare it with the corresponding baseline. We then discuss the results of tuning the hyperparameter,

α, that decides the importance between cross entropy and contrastive loss. We then discuss our experiments on varying the amount of unlabelled data and discuss the observations. We finally discuss the impact of using language specific versus multilingual unlabelled data during finetuning.

In this work, we propose WavFT, acoustic model finetuning approach with labelled and unlabelled data. The method encompasses selecting a labelled or unlabelled batch with probability p and updating the model with an objective function that is a weight combination of cross entropy and contrastive loss for labelled batch, and only contrastive loss for unlabelled batch. Our approach shows 11.2% and 9.19% WERR reduction over conventional finetuning on Gu-IN and Bn-IN locales respectively. WavFT needs smaller amount of unlabelled data unlike most unsupervised and self-supervised learning methods which use them in pretraining and hence is computationally less expensive. Our approach can leverage any existing seed model. It is readily usable in the production scale acoustic models as the proposed changes differ from conventional finetuning only in terms of using unlabelled data and the accordingly modified objective function. In future, we will conduct experiments with sampling probability p, will explore newer unsupervised objective functions, newer model architectures and test the efficacy on end-to-end ASR systems.